Complications and carats: These fashion brands have conquered the watch industry

Even in 2020, buyers often ask themselves the same basic question: what’s more important, the watch or the decoration? Complications before carats or vice versa? However, the market is changing and breaking away from these distinct categories. More and more jewellers and luxury brands are trying to establish themselves on the watch market, while customers of established brands expect not only high-quality movements, but equally impressive embellishments to match. Even the rigid stereotypes surrounding watch styles are changing more now. Diamonds, which are traditionally associated with ladies' watches, now also feature in men’s watches such as the Rolex Daytona, while there is an increasing demand for mechanical movements and complications among women. This also casts a new light on luxury labels, as customers are often sceptical about brands switching from jewellery or fashion to watches and fear they lack experience and tradition. Consequently, we decided to take a closer look at some of the biggest fashion brands that are also active in the watch industry.


Which luxury fashion brands are also successful in the watch industry?

Despite the fact that Bvlgari has been producing watches since it was founded in 1884, the company only presented what is considered to be the first diamond-set watch in 1918. The 1940s marked a major milestone for the brand: the Serpenti snake watch, which winds its way around the wrist several times in an elaborate coiled design and became an icon in the fashion and watch industry – just like the Turbogas Serpente from the 60s. In 1970, Bvlgari expanded into Switzerland to specialise as a watch manufacturer there. Collaborations with Gérald Genta resulted in the creation of the popular Bvlgari Bvlgari series, among others. The men’s collections were also expanded and series such as the Diagono and the Bvlgari Chronograph played an important role in the Swiss watch industry. 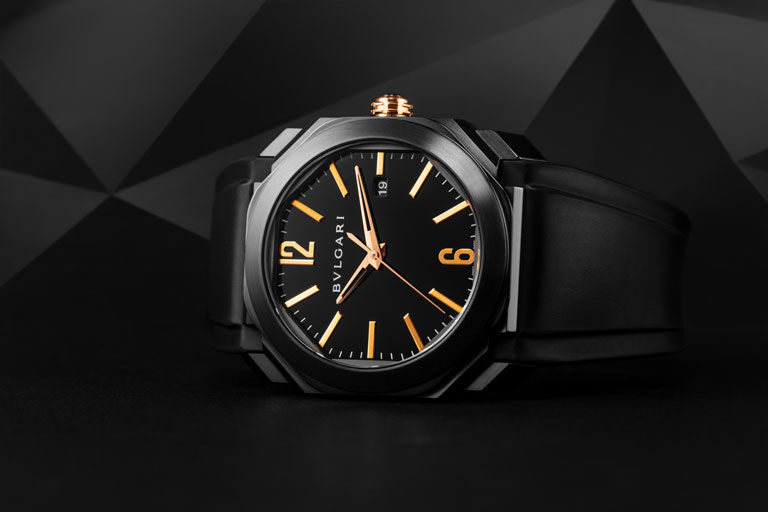 Founded in 1913 as a ladies' fashion house, Chanel first gained recognition by designing a simple black sheath dress, also known as the “little black dress”, and creating a fragrance called “Chanel No. 5”. Since 1932 the company has also been producing jewellery and luxury watches since 1987. The first model was the ladies Première watch. After this initial offering, Chanel continued to focus on dresswatches with quartz movements, before building a manufactory in La Chaux-de-Fonds in the new millennium and specialising in the production of mechanical movements. The breakthrough in the watch industry came with the Chanel 12, which was the personal project of Jacques Helleu, who worked as chief designer for Chanel from 1987 to 2003. Helleu designed the J12 as a unisex sports watch, which also contributed to its commercial success. The world of Haute Horlogerie took notice of the J12 as the luxury watch featured the use of ceramic.

Founded in 1860 by Louis-Ulysse Chopard in Sonvilier, Switzerland, Chopard initially produced precision chronometers and ultra-slim, high-precision pocket watches for everyday use. However, since 1963, the company has been run by the German jewellery and watchmaking family Scheufele. In addition, Chopard has also had their own factory in Fleurier since 1966 where new collections and calibres are designed in accordance with the original philosophy of Louis-Ulysse Chopard. 108 employees produce about 3,000 L.U.C. watches which are all COSC certified. Chopard's versatility is clear to see in both the Mille Miglia series, which is named after the Italian motor race as well as in the Happy Sport which combines the features of a dress and sports watch and continues Chopard's tradition of the famous free-floating diamonds. 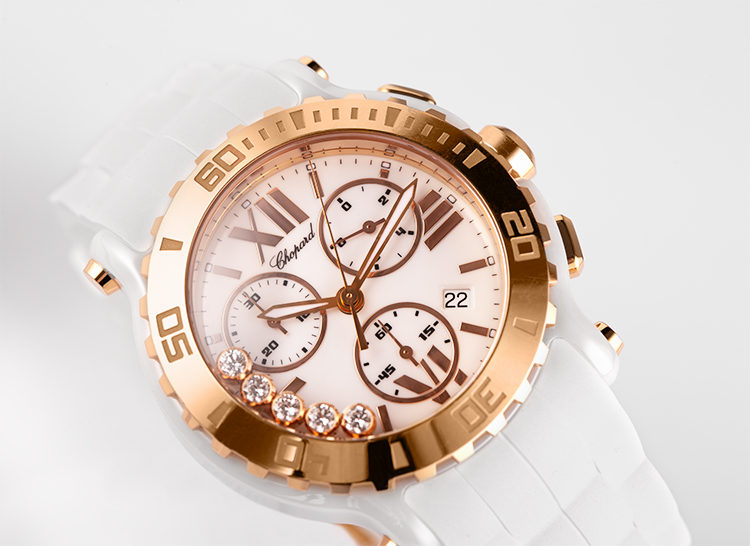 Dior: The New Look from France

When you think of Dior, the New Look revolution probably comes to mind, which once again elevated Paris to the status of fashion capital just two years after the Second World War. The close-fitting rounded shoulders and tight cinch cut waists still provide inspiration for the designs of Dior's watch collections today. In 1975, Dior released their first men’s watch with the Black Moon model, thus starting the fashion label’s partnership with the licensee Benedom from Meyrin. Although the company initially focused solely on men’s watches with the Black Moon, it was eventually known mainly for ladies’ watch collections such as La Parisienne and the La D de Dior.

Early in the brand’s history, Gucci was known for its iconic handbags as they are now. On this basis, the company quickly established itself as a luxury brand and soon added jewellery and accessories to its portfolio. From 1967, the luxury label had watches manufactured by the Swiss licensee Severin Montres until it was taken over by Gucci in 1997 and renamed Gucci Timepieces. While the design and finishing touches of the luxury watches are carried out in-house, the movements are supplied by ETA and Ronda. In particular, ladies' watches like the Signoria and the G-Timeless are standout models in the Gucci catalogue and are popular with watch enthusiasts.

Diamonds are quite simply Harry Winston's speciality. Unlike some jewellers who have also tried their hand at Haute Horlogerie, but don’t grasp the history and complexity of luxury watches, Harry Winston pique curiosity with their impressive timepieces. The company specializes in luxury watches in the upper price range and can count many royals among their loyal customer base. Since 2013 Harry Winston has officially been part of the Swatch Group. Collections like the Histoire de Tourbillon or the Ocean Tourbillon always try to top the complications featured in previous models. Diamonds and state-of-the-art technology combine to great effect for the perpetual calendar models, which feature a bezel adorned with shimmering diamonds. 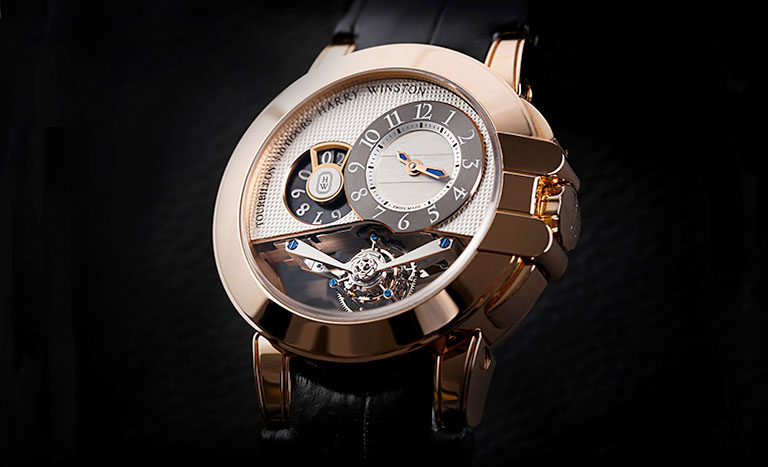 Hermès has always given luxury watches the same status as their core products, which at first consisted mainly of riding accessories, scarves and shawls. From the 1930s until the 1950s Hermès worked closely together with Universal Genève before the company opened its own manufactory in Bienne in the 70s. Today, the product range includes both quartz watches such as the Cape Cod as well as models with complications such as the Arceau l'heure de la lune, which shows the moon phases in the southern and northern hemispheres. But Hermès isn’t afraid of breaking new ground: the company joined forces with Apple in 2015 to combine the Apple Watch with Hermès designs. Other watch manufacturers have also already shown that smartwatches and the craftsmanship of watchmaking can be combined.

Louis Vuitton is one of the younger fashion brands that have also discovered the world of luxury watches for themselves. It was as recently as 2002 that the brand launched the first official LV luxury watch with the Tambour. However, under the guidance of Michel Navas and Enrico Barbasini, heads of the manufactory and think tank “La Fabrique du Temps”, the ascent to success was rapid. In 2009, Louis Vuitton even introduced the Spin Time, the brand’s first in-house calibre. The duo also came up with idiosyncratic designs that tastefully combine bright colours with clear geometric shapes. This is especially important for the Escale series, which displays several time zones simultaneously. In 2019, the company launched the Tambour Spin Time Air to mark the 10th anniversary of the Spin Time calibre.

Many people often think of jewellers and luxury brands exclusively as European or American brands – and they would be wrong to do so! Mouawad, however, shows that diamond experts also come from the Arab world. A fourth-generation family-run business and with five Guinness World Records to their name, it is safe to say that Mouawad has more than established themselves in the jewellery industry. Alain Mouawad is in charge of the brand’s endeavours in the luxury watch sector, combining Swiss innovation with extraordinary diamonds. Prices range between affordable models like the Grand Ellipse Sport Ville with the reference S2079 and one of the most valuable watches available in our range: the Grande Ellipse Chrono Monopoussoir Tourbillon with the reference 22211523. 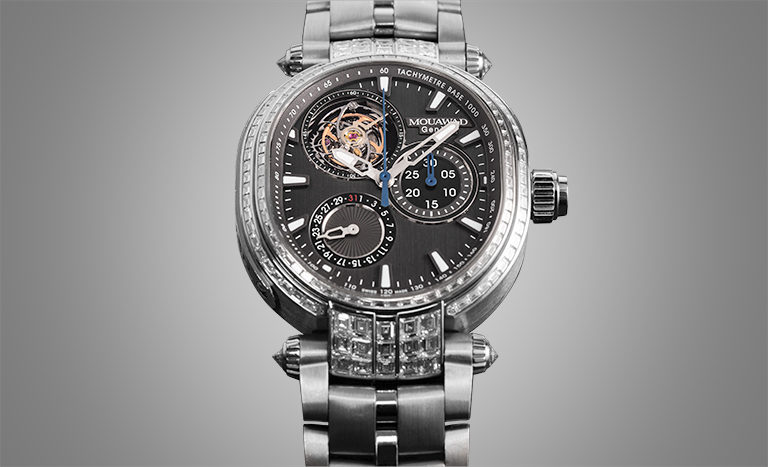 Tiffany & Co: Collaboration kings on a path of their own

If you want to gain credibility in the luxury watch market, it helps to have worked with the best in the business. With Patek Philippe in particular, Tiffany & Co have a long-standing partnership that dates back to 1854, when Tiffany became the first official dealer of Patek Philippe watches in the USA. Thus, the famous Tiffany & Co. dials can be found in vintage Patek Philippe models and Rolex watches. During the 19th century, the company also developed into an independent watch brand with sites in Geneva, successfully registered in-house patents and won numerous international awards.

However, the influence of Tiffany & Co. reached even further. From 1853 onwards, the entrance to the New York store was adorned with one of the first public clocks in New York. This soon became a landmark and was the only way for many New Yorkers to check the time. The clock was held in the air by a nine-foot bronzed statue of Atlas and was known as the Atlas clock. In 1995, Tiffany launched the Atlas collection in honour of this iconic clock. A watch with a special place in Tiffany’s history is the gold calendar watch worn by US President Franklin D. Roosevelt in 1945 that he was given as a birthday gift. In essence though, Tiffany & Co. always remain true to New York and pay homage to the fast-paced lifestyle of the Big Apple with the CT60 collection.

Versace: The iconic Medusa watches over

The Medusa Head carefully watches over the youngest fashion house on this list. Versace was founded in 1978 and although it is the youngest company on this list, the brand quickly established itself in Haute Couture thanks to the ingenious creations and much sought-after designs of Gianni and Donatella Versace. Since 1990, the Versace fashion label has also been bringing luxury watches to the market and transferring its distinctive design into collections of dresswatches, such as the Ref. VQI010015 from the Dylos collection or the Ref. 01AC1 from the DV Collection. Since 2004, the company have been collaborating with the Timex Group, which is responsible for the design, production and distribution of the watches.