For divers, scientists and even secret agents, the Omega Seamaster Aqua Terra is the perfect companion. Because it is incredibly solid and at the same time communicates style like no other watch. It convinces with waterproofness and resistance to magnetic fields even the die-hard Daniel Craig aka James Bond. The models of this series are among the most popular Omega watches ever – for a good reason: The finest technology and the appealing design make the hearts of watch enthusiasts beat faster.

As early as 1932, Omega opened the competition for the best divers‘ watches with the launch of the Omega Marine (Ref. CK 679). The Omega Marine was the first wristwatch designed specifically for divers and launched a race of the manufacturers. Since then, technology and design concepts have been constantly being worked on, but Omega still has the edge.

However, the current Seamaster collection not only includes the Aqua Terra, but also the universal Planet-Ocean and the robust Diver-family. 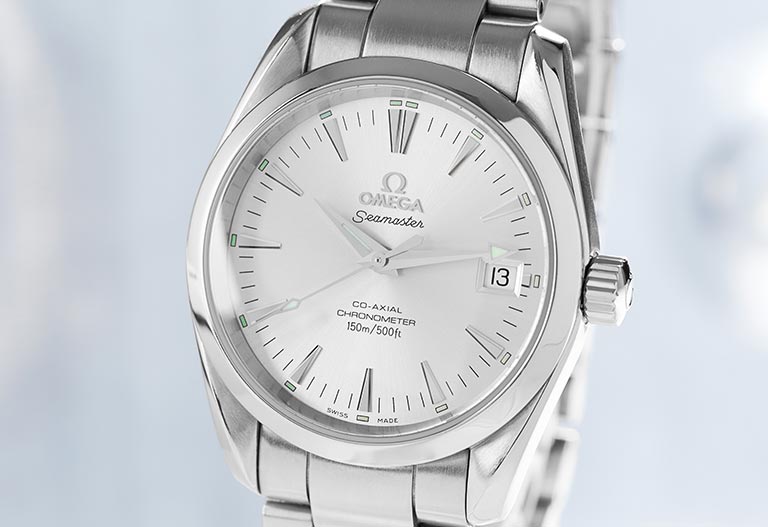 Anti Magnetism, a phenomenon of science

We are surrounded by magnetic fields almost everywhere in our everyday lives. Laptops, cell phones, light bulbs. They are invisible and usually so weak that they do not affect the movement of a watch. In some occupations, such as as doctors or scientists in the laboratory, but also in other areas, some are exposed in much stronger magnetic fields. These can be the cause of inaccuracies. However, as a watch is sometimes indispensable, manufacturers have been working on counteractive measures already since the 1920s. In 1956, the company Rolex presented the Milgauss, a model that was resistant to magnetism of up to 1,000 Gauss.

In 2013, Omega widened the horizons of the industry by launching the Omega Seamaster Aqua Terra 15,000 Gauss (Ref.: 231.10.42.21.01.002). With that the brand outbid anything previously seen. Because the model is, as the name suggests, resistant up to magnetic fields of 1.5 Tesla – which corresponds to 15,000 Gauss. The protection of the CoAxial-caliber 8508 from magnetic fields does not occur like it does in other watches – e.g. the Rolex Milgauss with its soft iron cage around the movement, but by the production of the movement of anti magnetic materials, such as silicon. At the same time, this forward-looking approach has created more freedom for the design of the watch itself – a bolted sapphire crystal base is thus possible. This makes the sight on to the automatic movement possible. It has an impressive sunburst cut, blackened screws and the bright red painted engraving saying „> 15,000 GAUSS“ on the rotor. 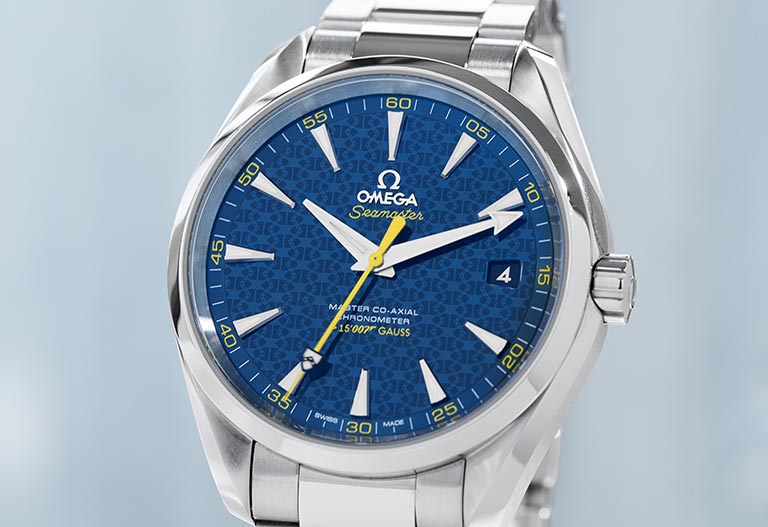 An aesthetic model for the man of the world

Almost a must-have is the Omega Seamaster Aqua Terra 150M Master Co-Axial. The men’s watches skillfully combine style, sportiness and absolute quality in terms of workmanship and components. Models released after 2013 have the words „CO-AXIAL MASTER CHRONOMETER“ on the dial and also have a non-magnetic automatic movement, either the Omega caliber 8500 or 8501. The 41 mm case is made of stainless steel and was changed slightly for the current collection. To perfectly symmetrize the design, the designers at Omega set the date window from three to six o’clock. Thus, the appearance of the latest Aqua Terra 150 M is consistent with the appearance of the first Omega watch with a date window from 1952. Also, the engraving „water resistance“ was relocated – for design reasons on to the case back. A new, conical crown completes the attractive exterior of the watch. It is available in different colors and with either stainless steel or 18-carat gold.

But the Aqua Terra 150 M is not an exclusive mens series. Omega also offers charming women’s models that impress with their impressive aesthetics and elegance. Technically, the women’s models are on a par with watches for men, they also have anti-magnetic automatic movements, which are also precise and powerful. However, the choice of materials here is further enhanced by yellow gold, and the mother-of-pearl dial is reserved for the ladies‘ watches. With a choice of 28, 34 or 38 millimeters in diameter, they are a tad smaller than the 41 mm men’s version, but compensate this with additional elements such as diamond-set bezels and indices. 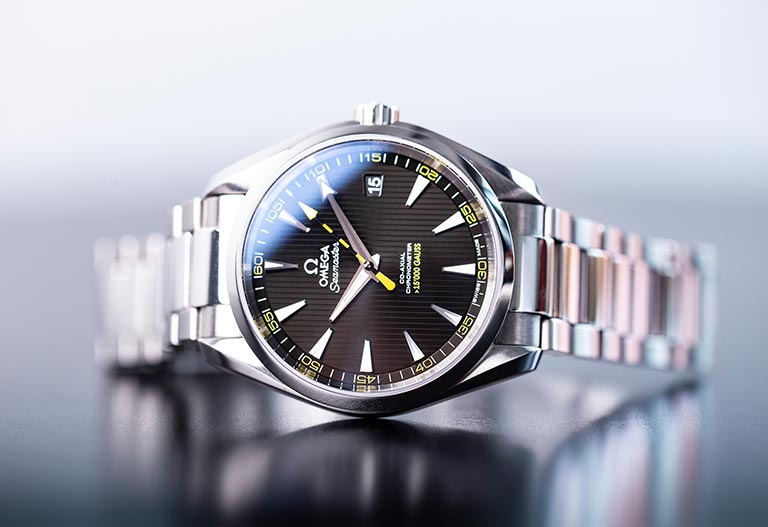 On behalf of Her Majesty

The actor Daniel Craig cut a fine figure as secret agent James Bond in the movie „Skyfall“. But most of that was due to the watch that adorned his wrist: The Aqua Terra 150 M (Ref 231.10.39.21.03.001) with blue dial fits like no other. As a former naval member, his past connects him with one of Omega, explicitly this model looks very sporty and elegant at the same time. Just like the always well-dressed, popular womanizer. Also in the latest Bond film, „Specter“ the wrist of the secret agent 007 is adorned by the Aqua Terra 150 M (Ref. 231.10.42.21.03.003). 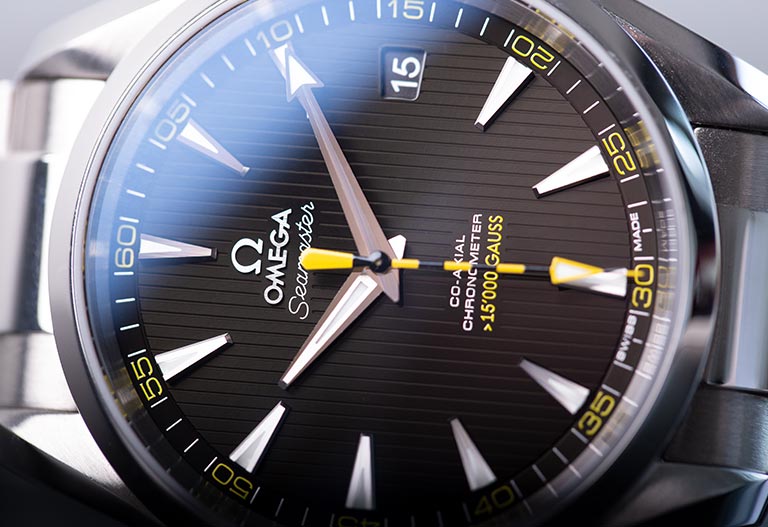 Coinciding with the film’s premiere in 2015, the company launched the Omega Seamaster Aqua Terra 150M James Bond Limited Edition, which symbolically represents a birthday present. Because since 1995, the MI6 agent wears exclusively watches of the brand Omega, at this time exactly 20 years. The anniversary model is limited to 7,007 pieces and sets yellow accents with yellow digits and a yellow second hand.

Let’s begin with the mentioned divers, scientists and secret agents as clientele of the Omega Aqua Terra. The precision of the Co-Axial movement is groundbreaking, Omega has outdone its design and women’s models have found their way into the Omega product line. The watch’s understated and simple, well-thought-out design makes it ideal for pairing with both business dress and casual outfits, evoking the hidden desires of many.

Do not forget the pre-owned watch market. Here, with a little patience and research, you can save significant amounts of money. 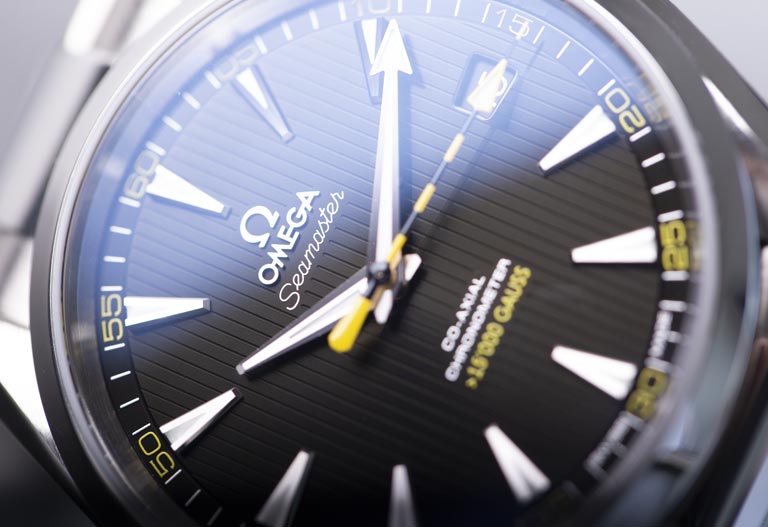