At Watchmaster, all Omega watches in stock are authenticated by our master watchmakers. But how can you confirm the authenticity of a watch when an expert isn't available? Watch boxes can be an important tool for authentication. That's why it can be beneficial to know about the different boxes that Omega has developed for its models. Some watch collectors will only buy a watch if the original papers and matching box are included. Since we have had the pleasure of holding a number of Omega watch boxes in our hands, we'd like to share a few of them with you. 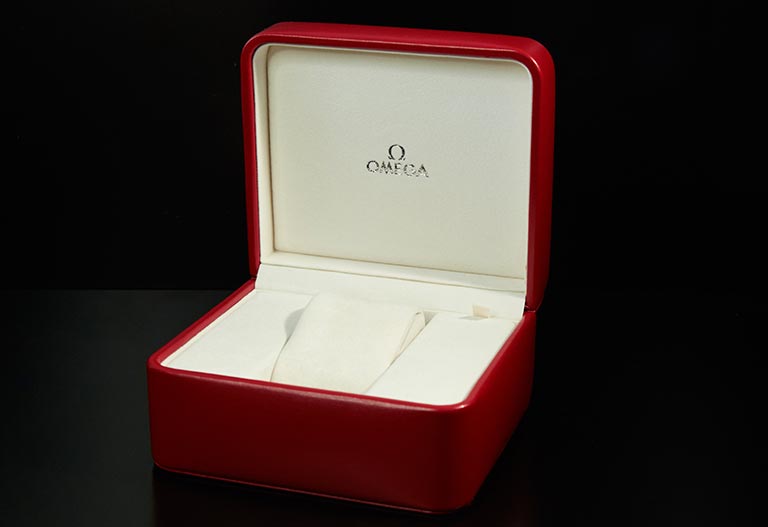 An overview of selected Omega boxes

Similar to Rolex's boxes, there is a linear evolution in the design of Omega's watch boxes, which is very closely related to the different models. Certain series such as the Moonwatch come in a separate case, while limited editions come in a specially designed box. For example, the Seamaster James Bond „Spectre“ Ltd. (Ref. 233.32.41.21.01.001) is in a case that is built like a safe and can only be opened with a three-digit combination (or brute force). 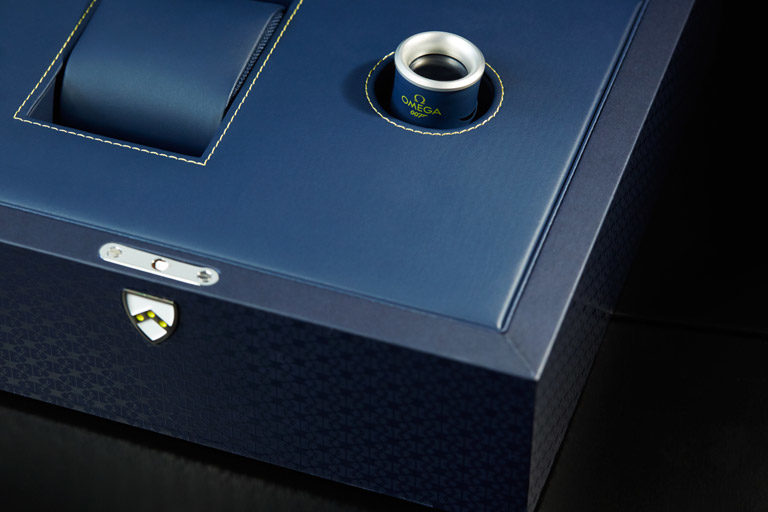 One additional note to begin: the design, size and layout of boxes differ slightly depending on the country in which they were manufactured. Boxes for Europe differ slightly from boxes for the USA, and these are again different from boxes for New Zealand. Design is also subjective to a certain degree, so don't panic if the inside of an Omega case isn't scarlet, but appears to be ruby red. And if you have any questions, please feel free to contact our customer service at any time.

To the moon and back: The box of the Omega Moonwatch

Let's look at the Moonbox containing the Speedmaster Moonwatch Chronograph (Ref. 311.30.42.30.01.005). At a time when many brands are increasingly environmentally conscious and economical when it comes to packaging, the box of the Moonwatch clearly stands out.

Upon removing the thin cardboard protective cover, there is a massive case, in the centre of which sits an emblem consisting of the seahorse, which is the official symbol of the Speedmaster, the series name and the Omega logo. The box is divided in two at the centre and can be opened by two elegant black loops at the bottom. Within the case, there is another case covered in black nylon. In the middle of this is again the silver emblem. Below that, the logo, brand name and series name are milled in silver, whereas the prestigious title "Legendary Moonwatch" is in red. There is an instruction manual and an imitation leather cardholder on the back of the box, which contains, among other things, the international warranty information and a pictogram, that is, a card with all the relevant information about this unique watch. Under the case, there is a narrow compartment with a booklet commemorating the history of the Moonwatch and a short manual explaining how to switch bracelets. 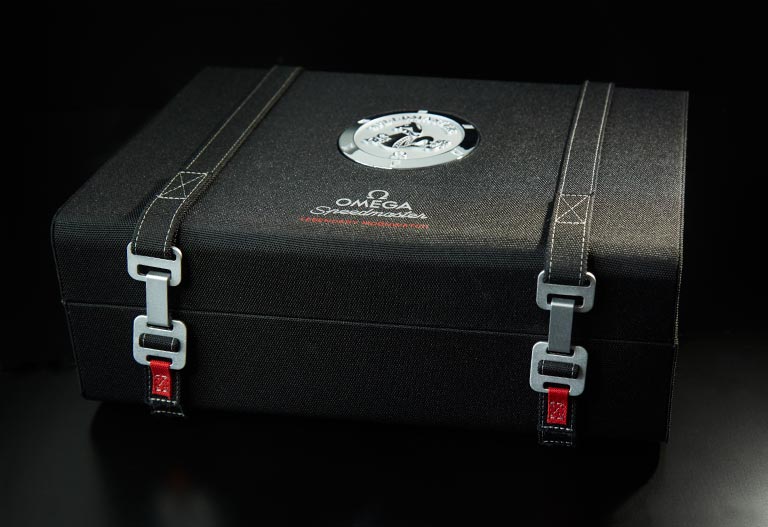 The case can be opened by unhooking the silver latches. On the lower right side, the emblem can be found again inlaid as a paperweight made of precious metal. Two compartments are built into the bottom and can also be opened by means of a loop. On the left side, there is a watchmaker's glass with a drawn tachymeter, which is based on that of the Moonwatch. Two Nato straps and four spring bars are stored in the upper compartment, as well as a screwdriver to change the strap of the watch. The watch itself is located in the bottom centre and is protected by a cushion on the top of the case.

If you're into vintage Omega watch models, then you're also probably familiar with the slim, Art Deco-inspired Bakelite boxes that can be used as travel cases, ornamental boxes, or window displays, depending on how they're presented. These were made by a Finnish company named Jousi Turku and are hard to come by today. They sell for up to €500 on popular auction platforms.

Over the years, Omega changed the design of the boxes until it decided to go with the now signature, scarlet synthetic leather boxes. Similar to Breitling and Rolex, however, the ornamental cases and boxes usually remained plain and slim until well into the 1970s. The box for the Omega Seamaster Chronograph (Ref. 176.007) from 1975 is a delightful example of this type of design. The Omega logo is placed in the middle of the lid and flanked by a gold-coloured sticker indicating the boutique where the watch was sold. 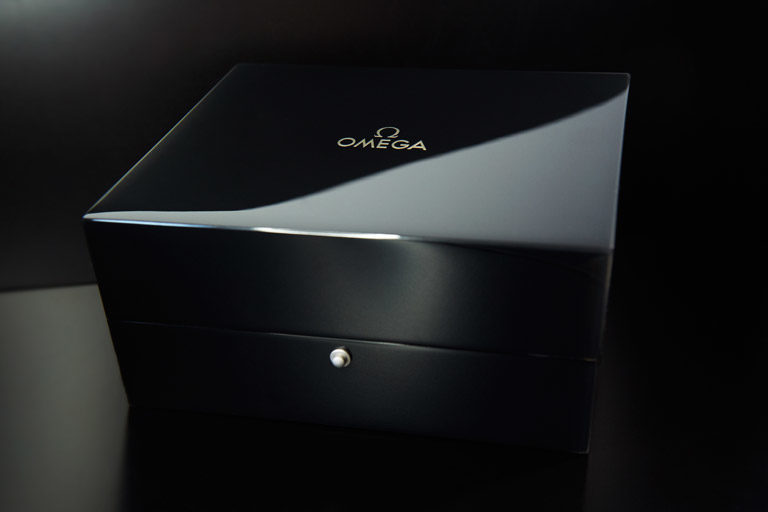 The switch to red boxes

Let's look back to 1990 at the Omega Constellation (Ref. 396.1076), which was sold in a hand-sized box covered in grey fabric with rounded corners. Looking at the underside of the lid, it is apparent that this is one of the standard scarlet Omega boxes with faux leather covering that was modified for the Constellation series. The front of the lid has the logo, lettering and series name in gold. The same can also be found on the inside of the lid. On the bottom of the box, "Box made in Switzerland" is printed in grey letters. Upon opening the box, the standard guarantees and instructions for use can be found on top of the watch, which lies on a cushion in the middle. 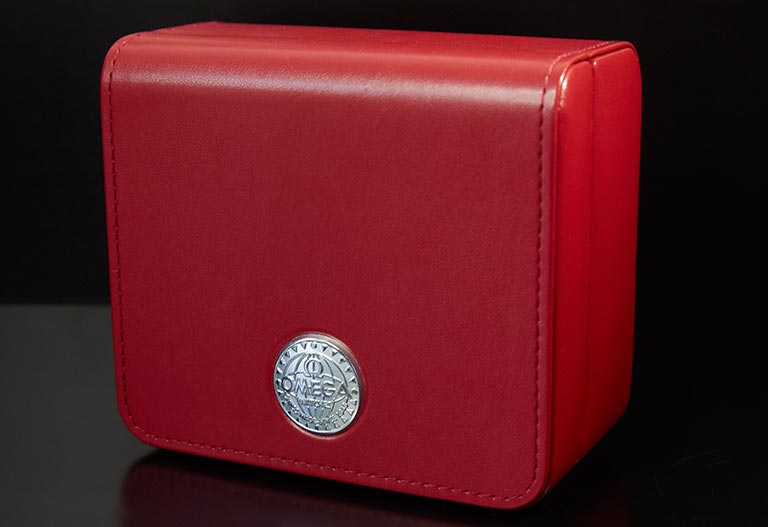 Later on, Omega introduced the now standard white box, which has become the trademark packaging of the Seamaster. The 2007 Omega Seamaster Aqua Terra 150M (Ref. 2512.50.00) comes in an understated white box with the logo and brand name on the lid. Once removed, the front panel of the bottom part swings open to reveal a box covered in red imitation leather. The compartment in the back holds the user manual and a card case with the warranty, chronometer certificate and pictograms. A stainless steel emblem with the logo and brand name superimposed over a globe can be found on the front. On the bottom, the words "Swiss made since 1848" can be seen. Opening this box, the inside of the lid features the Omega logo and lettering once again. The lower part of the box can also be completely removed thanks to a loop on the upper right side, which can vary depending on the model and series of the watch.

As mentioned before, Omega has always been willing to adapt the design of a box to fit its series. For example, the Omega De Ville Ladymatic (Ref. 425.60.34.20.63.001) comes in a completely ivory white box, which is engraved with narrow vertical lines. The lid is also slim, while the bottom is kept very tall. This gives the watch box the appearance of a jewellery box. The logo and lettering for this version are in red and the top of the box is decorated with a bow.

As demonstrated by the Moonbox, Omega is quite capable of producing high-quality display boxes that do not lose value on the watch market, even in pre-owned condition. An original Moonbox sells for a solid $700 online.

Apart from the Moonwatch box, however, Omega has increasingly chosen to use wooden boxes in recent years. These are more resilient and durable than synthetic leather boxes. This decision has been largely well-received by watch enthusiasts. For example, the Seamaster and Aqua Terra Series have come in wooden boxes since 2015. Of course, it is impossible to predict what the future holds for Omega watches, but the trend shows that these elegant wooden Omega boxes will most likely become the standard. 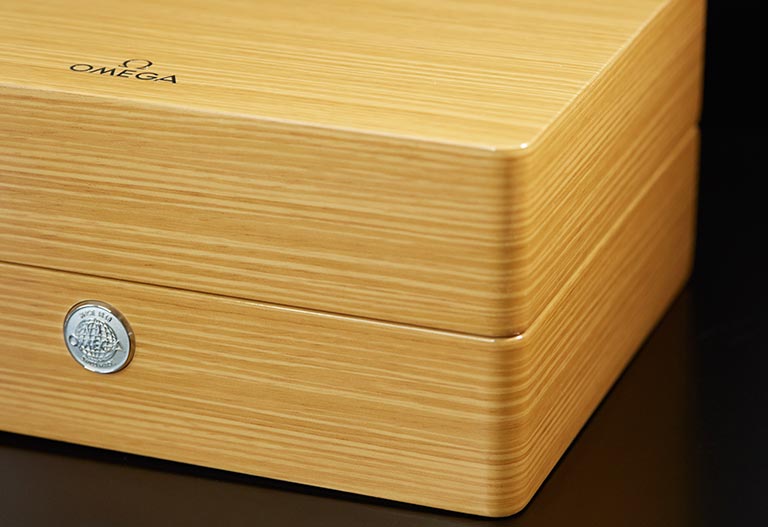 Are you familiar with the watch boxes from these manufacturers? 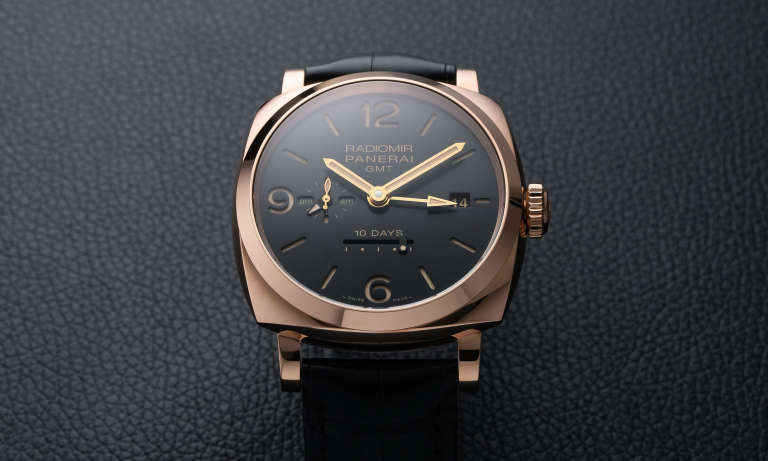 10 reasons why we love Panerai

Founded in Florence in 1860, Panerai has long been one of the cornerstones of European watchmaking. Particularly known for their trademark case design, the timepieces of Officine Panerai enjoy great popularity not only among the ranks of the Paneristi. These prominent wristwatches have also been a staple on the wrists of Hollywood stars for some time. That alone is reason …

END_OF_DOCUMENT_TOKEN_TO_BE_REPLACED 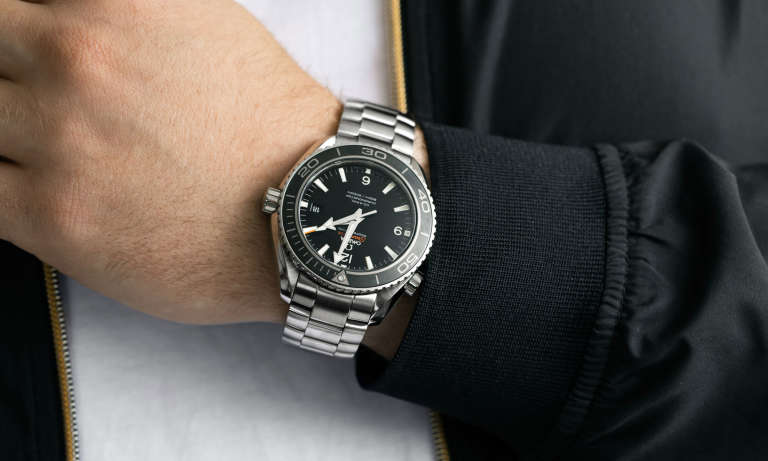 When shopping for the right wristwatch, people with stouter wrists usually have a tougher time than those with narrow wrists. Wristwatches with case diameters under 40 mm can quickly look a bit out of place on a large wrist. To help in the search, we have collected a few tips and feature a few of our finest watches for large wrists. Big watches for large wrists Wrists …

END_OF_DOCUMENT_TOKEN_TO_BE_REPLACED 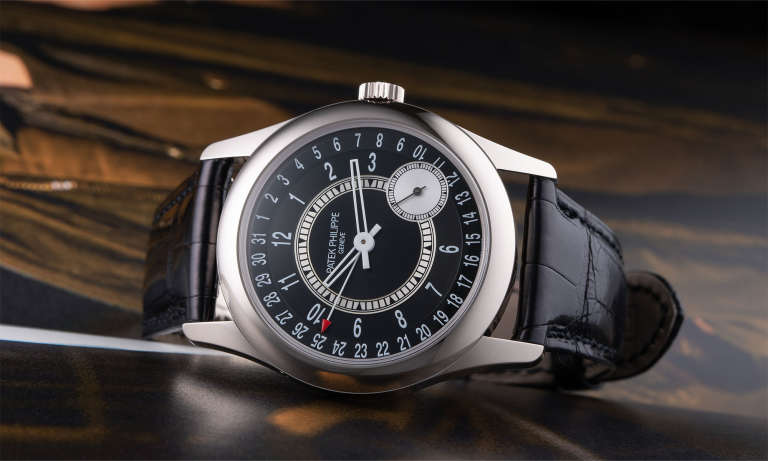 10 reasons why we love Patek Philippe

END_OF_DOCUMENT_TOKEN_TO_BE_REPLACED 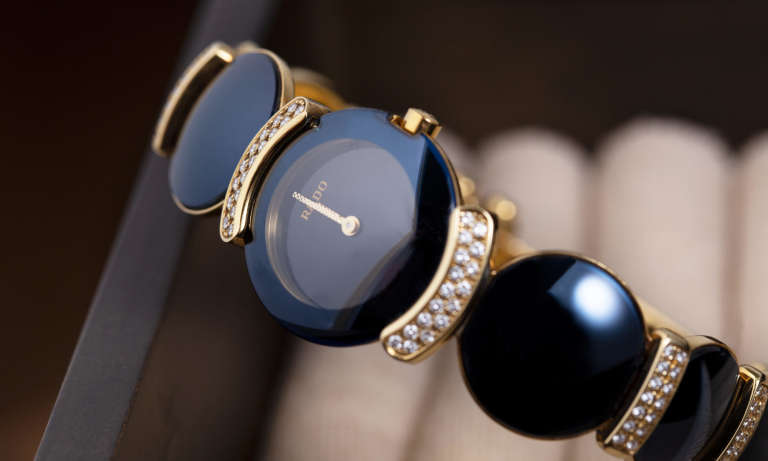 Often, luxury watches are described as being excellent everyday companions or performing brilliantly under the most adverse conditions and in extreme situations. But not all luxury watches can do that – and in fact, they don't have to. While the wristwatch is a practical item for everyday use for many people, elaborately designed and extravagant high jewellery watches are …

* Terms and conditions apply
All prices include VAT. If differential taxation in accordance with §25a UStG is applicable the VAT will not be reported separately.
Watchmaster ICP GmbH | Charlottenstraße 60 | 10117 Berlin | Germany
© Watchmaster ICP GmbH
# f9bc25253