The history of Daytona dials

There are not many watches of the Rolex brand which stand out among the other models in such a way that a whole book is dedicated to them. For Daytona fans, however, this is not a surprise – as there is a lot to discover in the history of Daytona watches.

The Cosmograph Daytona was launched in 1963 and initially designed primarily for professional racing drivers, but quickly became a widely popular icon. The Daytona's success story began on Paul Newman's wrist before making itself a name over the next years, particularly through its technical specifications. From its beginnings in the 1960s until 1987, the Daytona was manufactured exclusively with manual winding. From 1988 to 2000, Rolex switched to automatic movements, which resulted in the legendary Zenith Daytona with the calibre 4030. What most people do not know: This transformation also affected the dials of the Daytona and led to numerous variations. 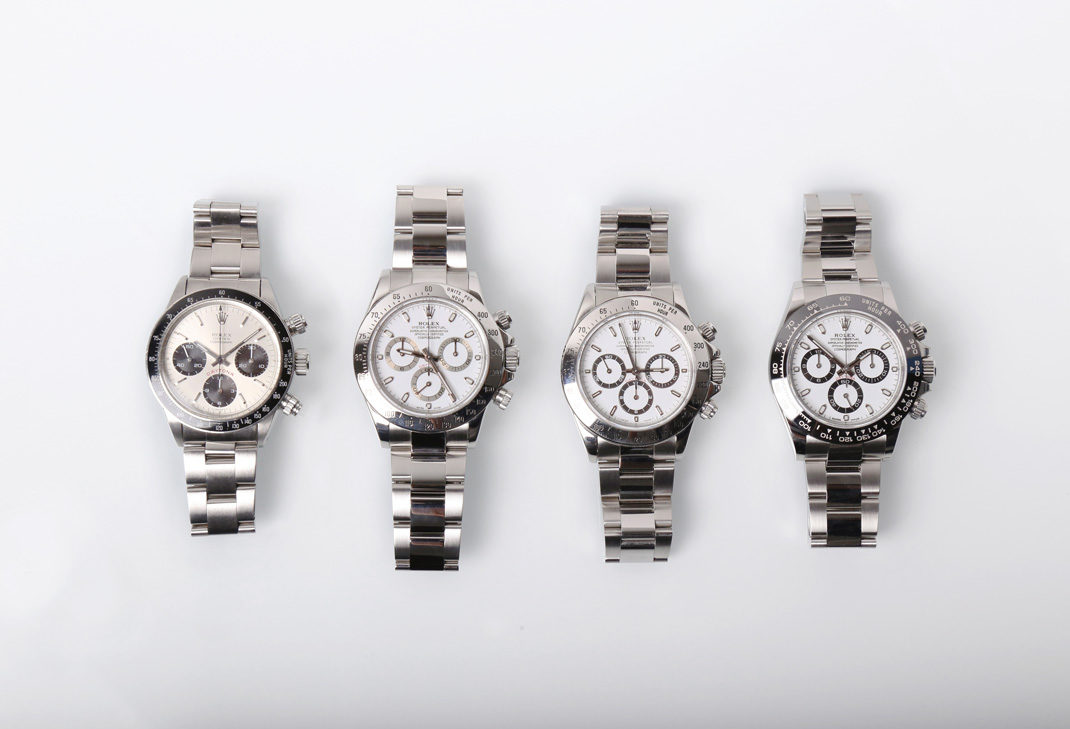 When we talk about the Daytona "Paul Newman", we are referring particularly to the reference 6239 with either a black or a white dial and contrasting totalizers and inlay. The main difference between these early models are the pushers which can be either screwed in or not. The dial designs of the early Daytona models with screw-in pushers, in particular, are very complex and rich in variations, as can be seen, for example, in the Ref. 6240 manufactured from 1965 to around 1969. It was the first Daytona with an Oyster case, which guaranteed the water-resistance of the watch. However, the variations that appear most often have neither the word "Daytona" nor "Oyster" on the dial. This variant can be found on the Ref. 6240 with the serial numbers 1.2 to 1.6. The minimalistic version of these models is known as the "Solo" dial, which only has the lettering "Rolex" and can be found among the serial numbers from 1.2 to 1.4. Another extremely rare version of the Ref. 6240 features the so-called "ROC" dial with the inscription "Rolex Oyster Cosmograph". Cosmograph is a neologism developed by Rolex in order to differentiate its chronographs from those of the competitors.

The other early models with screw-in pushers, such as the Ref. 6263 and Ref. 6265, which Rolex sold from 1971 to 1988, have an exciting history as well. In terms of the material, these watches differ only in their bezel. The Ref. 6265 has a stainless steel or gold bezel, while the Ref. 6263 has a black acrylic bezel. Here too, numerous dial variants can be found, of which we would like to introduce the three most prominent: The dials are the same:


Besides the Daytonas with screw-in pushers, so-called "Pump Push-Down" buttons were used on the Ref. 6239, Ref. 6241, Ref. 6262 and Ref. 6264. At this time, the dials were more consistent and mainly produced as two-tone and Paul Newman. Another special feature is that although the models are equipped with an Oyster case, the water-resistance is not specified, which is why the "Oyster" lettering on the dial is missing. 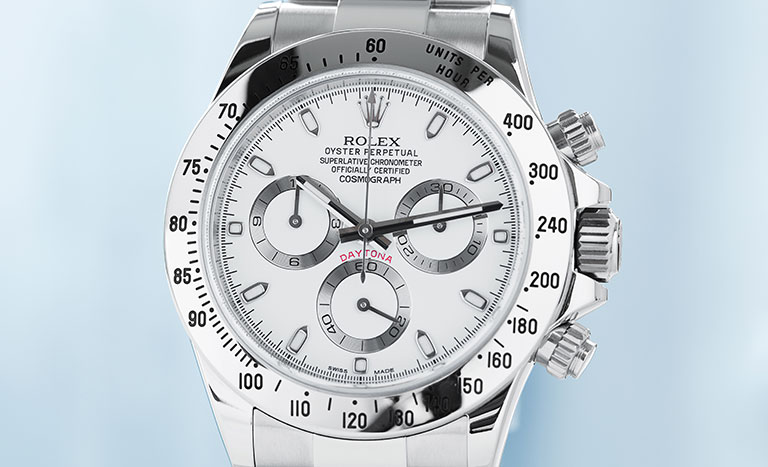 With the introduction of automatic movements, the dials of the Daytona changed as well. Many of these variations are only minimal and not important for the majority of the wearers. For watch collectors and fans, however, these differences are crucial and models of this kind are therefore highly sought after.

In other industries, production errors are usually considered to be flaws that result in a significant reduction in value and price. In the watch industry, however, the opposite is often the case. Models with flaws are highly coveted by watch collectors and often sell for record prices at auctions. Among such rare items there are also some special Daytona dials.

Especially the Mark IV versions with black dials are in great demand today and bring in almost double the sales revenue compared to their siblings with white dials. This is due to the fact that between 1994 and 1995 the models with the Ref. 16520 were painted with a special organic lacquer called Zapon. The problem was that the paint did not cover the entire totalizers. Over time, the silver edges of the totalizers started to oxidize and turned into a brown colour tone. Models with this special dial were named after their discoverer, Osvaldo Patrizzi, and are particularly popular among collectors. Even today, the effect remains.

The partially varnished totalizers were not the only production flaw in the history of Daytona dials that caused a big hype about a certain model. The Daytona with the Ref. 116520, which was launched in 2000 with Rolex's own Calibre 4130, also achieved great popularity. But this time it affected the white models. In the first two years after the model was launched, the white dial faded to a cream-coloured tone and thus established the name of the "Cream" dials.