Anyone who thinks of luxury watches will probably first think of Swiss companies. But in Germany there are also traditional watchmaking companies, German watches are slowly but steadily conquering the international market. As early as 1767, Markgraf Karl Friedrich von Baden laid the foundation for the watch industry in Pforzheim Germany with an edict in October 1767. The Frenchman Jean François Autran founded with the Swiss Amédé Christin and Jean Viala, the first watch company which expanded a short time later to a jewellery factory.

Today a large part of the German watch industry is clustered within the small town Glashütte. The small town in Saxony has just over 7,000 inhabitants and is the production site for some of the most successful German watch manufacturers. Made in Germany is also in the watch industry an idiom for quality. In terms of precision, functionality and appearance, the designs from Germany are internationally competitive and often quite affordable. Especially small and medium-sized companies are currently located in Germany. Their models are often in the lower luxury segment, but at the same time guarantee a high level of craftsmanship. We have selected and put together our top 10 watchmakers from Germany. 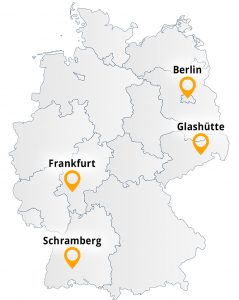 The traditional company settled in Glashütte in 1845 with Ferdinand Adolph Lange and quickly began to establish Glashütte as a city of watchmaking. His watches are characterised by traditional craftsmanship and loving detail work, which helped him to gain international recognition beyond the German borders. In 1990, A. Lange & Söhne was re-founded by Walter Lange, a direct descendant of the company’s initial founder. With the help of Günther Blümlein, the president of IWC, A. Lange & Söhne was again able to establish itself as the most exclusive German watch manufacturer. Characteristic for many A. Lange & Söhne watches are an oversized date display and detailed elaborated complications as in the Lange 1 Time Zone. The regional roots of the company are also reflected in series such as the Saxonia. 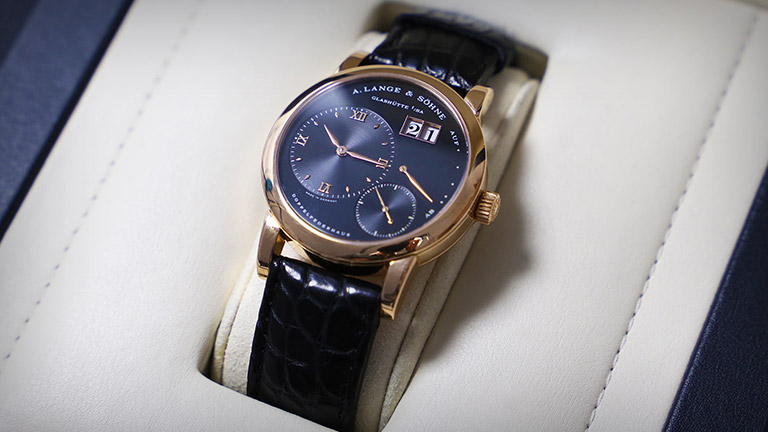 The company was founded in 1961 by the pilot Helmut Sinn in the city Frankfurt am Main. Based on his biography as a pilot and aerobatic instructor, he initially produced mainly watches that are specifically tailored to the needs of pilots and flight instructors. In the meantime, the company has among other things, added diver's watches to the portfolio. Special chronographs and navigation watches can now also be found in the product range. Sinn sold his products right from the start through back then very innovative direct sales. Today you can buy Sinn watches online through their own website or in person at selected retailers. At Sinn, the functionality of the watches always comes first. An example would be the EZM 12, which was developed for air rescue services. Other exciting series include The Frankfurt Financial District, the 600 or the DZ EZM 3 with magnetic field protection.

Founded in 1990, Nomos Glashütte is a relatively young, emerging company. Their production workshops are located in Glashütte. The thinking tank and design office, the Berlinerblau agency, is located in the German capital. The watches appeal with affordable prices, minimalist design and high accuracy thanks to in-house caliber – made in Germany. The watches are usually very flat, their dials geometrically, perfectly balanced and offer a lot of choices in terms of colours and shapes: in series such as the square Tetra, the Orion with striking stick indices or the classic Ludwig with Roman numerals there is something for everyone’s taste. 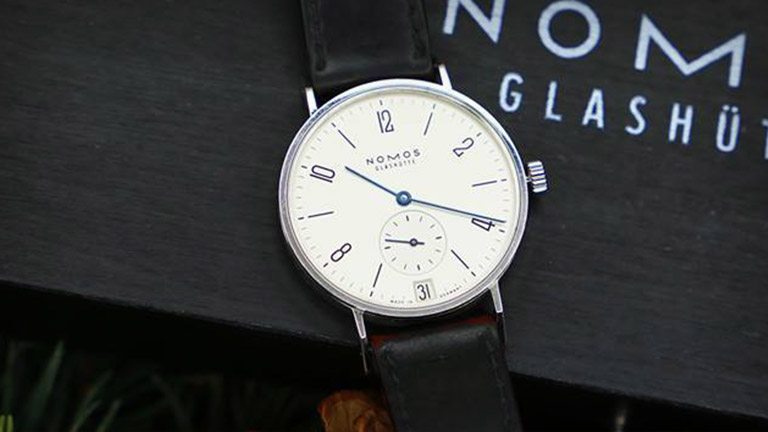 The luxury brand Montblanc is mainly known for the production of exclusive writing instruments, but has also been producing watches for decades now. Their mechanical watches are still designed with great attention to detail and assembled by hand. At the same time, Montblanc has ventured into the digital world with its Smartwatches. Series such as the Heritage Spirit Moonphase or the Star Steel are captivating with rich details, paired with elegant design and automatic calibres.

The company Junghans was founded in 1861 in the Black Forest area in Germany. During its hay day with 3,000 employees, it was, back then, the world’s largest watch company. Junghans produced all sorts of watches: from wristwatches with manual wind or automatic calibres to radio alarm clocks. A special model of Junghans watches can be admired in the Sultan’s Palace in Yogyakarta, Indonesia. After the end of the Second World War, Junghans specialized mainly in precision wristwatches and became one of the leading German brands in the 1950s. Classics as the Max Bill Quartz were created in collaboration with Bauhaus artist Max Bill. Even today, all watches are being produced in Schramberg in the Black Forest.

As the name Glashütte Original suggests, the company was founded in Glashütte back in 1845. Today, it is not only one of the leading German watchmaking manufacturers, but also has a proud history. In the Glashütte Original watchmaking school "Alfred Helwig", the knowledge accumulated over decades was passed on and transferred into the 21st century. Their watch series play primarily with symmetries on the dial and refreshingly reinterpret traditional forms. A classic series is the Senator, which comes in a variety of designs with and without complications. The Pano collection stands out above all by its asymmetrical dial, and in the 70s and 80s, it led the market in the vintage collection of classics. 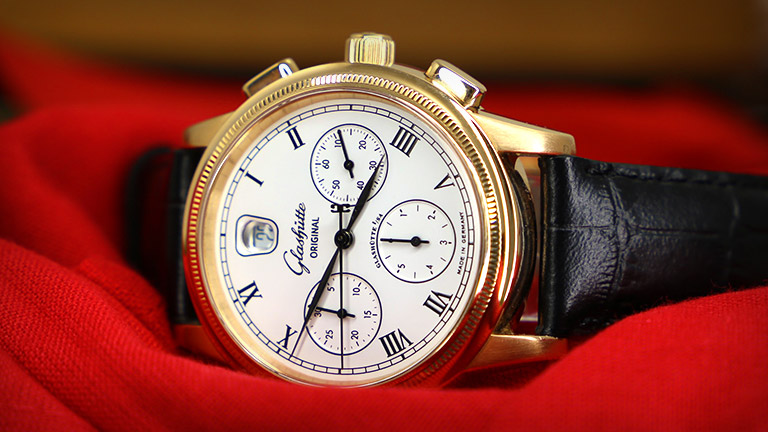 Founded in Münster in 2001, the company Meistersinger is oriented towards the early watchmaking tradition of the Middle Ages. Their unique selling point is the one-hand watch. Meistersinger wristwatches are exclusively equipped with just one hand, the hour hand. With their unusual designs the company has already won numerous awards and has made a name for itself over the years for unconventional designs and best quality.

Founded by the great-granddaughter of aviation pioneer Hugo Junkers, the company Junkers specialised in aviator watches and chronographs. They are firmly rooted in the history of flying. Names like "Tante Ju" or "Iron Annie – Ju 52" are therefore a tribute to Junker’s machines. Like many watch manufacturers, Junkers has taken the Bauhaus and its motto "Form follows function" as inspiration, which is reflected in an extra series. At the same time, the Junkers Bauhaus series is reminiscent of a collaboration between the Junkers' factory and the Bauhaus.

Mühle is also a traditional Glashütte watch manufacturer with 150 years of history. Originally specialising in measuring instruments and speedometers, today the company uses its many years of know-how to manufacture precise, functional timepieces and nautical instruments. Their watches are designed for professional use at sea and therefore have to meet the requirements of high functionality and good readability. Series like Robert Mühle S.A.R. Rescue-Timer are designed and optimised for special operations personnel, in particular rescue helpers. Others, such as the Robert Mühle AUF/AB, are simpler and at the same time equipped with exciting features like the up/ down indicator, which displays the power reserve.

Maybe not quite in a league with the previously named companies and models, but in our opinion definitely worth mentioning: master watchmaker Philipp Nitzsche is based in Berlin and an all-round artist in the watch world. He's also an important part of the Watchmaster team. Nitzsche creates unique pieces using extraordinary materials, exciting designs and high craftsmanship. His assortment mainly consists of stainless steel wristwatches with a manual winding mechanism. In addition to producing his own collection, Philipp Nitzsche specialised in the restoration of vintage watches and the delicate refinement of movements. 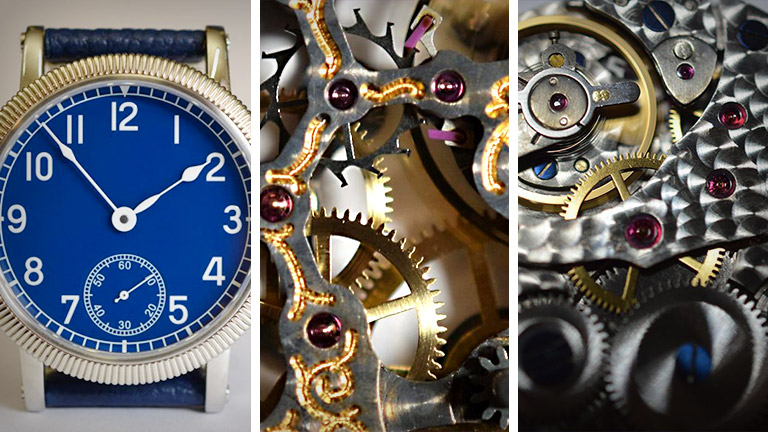