Let's suppose you want to buy one of the most legendary wristwatches ever: a Rolex Daytona. Unfortunately, this luxury watch from the Swiss manufacturer is now so popular that anyone interested in buying one might have to wait up to eight years. As far as one of the coveted Daytona steel models are concerned, the wait is unfortunately rather open-ended and there's no guarantee on an exact delivery date. So what to do?


Not interested in long waits and big price tags?

If you can't do without a Daytona in your watch collection, you have exactly two options: either join the waiting list of your preferred concessionaire or purchase a pre-owned Daytona. When buying a used Daytona, however, you will have to expect prices that are significantly higher than the list price, which is solely due to the dauntingly long waits. 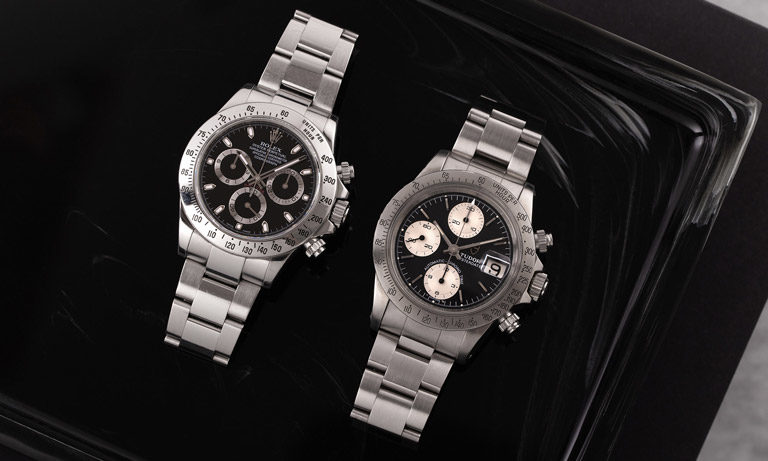 
Great alternatives to the Rolex Daytona

If you don't want to resign yourself to waiting a nearly decade for your watch or pay almost twice as much for a Daytona, then it's time to consider looking for a suitable alternative. We'd like to share a few ideas to help you find a worthy alternative to the Rolex Daytona and feature a couple of equally impressive models.

If you don't get something from one company, it can be worth looking at the competition – and in the field of racing chronographs, Rolex's biggest competitor is TAG Heuer.

With a TAG Heuer Monaco, you are not only acquiring a truly outstanding watch, but also wearing a piece of history on your wrist. The TAG Heuer Monaco is one of three watches driven by Heuer's first self-winding movement, alongside the Carrera and Autavia. But it was the Monaco that was particularly responsible for the most excitement due to its distinctive appearance, its racing success while on Jo Siffert's wrist and its guest appearance on the wrist of Steve McQueen in the film "Le Mans". The Monaco's iconic design evokes the smell of burnt rubber, gasoline and radiates the charm of motorsports. Moreover, as the wearer of a Monaco, you are in the best of company: alongside Steve McQueen, the actor Patrick Dempsey, for example, is also an enthusiastic wearer of this watch. 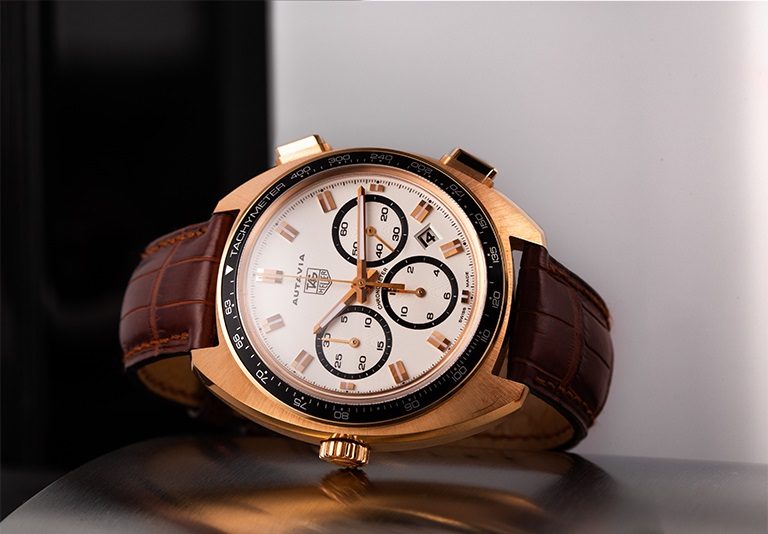 
However, if the Monaco's square case doesn't start your engine, TAG Heuer has another alternative with a classic round case. This model has even more in common with the Rolex Daytona than the Monaco, because the TAG Heuer Carrera Chronograph was released almost simultaneously and was a fierce competitor to the popular Cosmograph from the very beginning. Furthermore, both the TAG Heuer models and the Daytona are named after legendary races, all of them are chronographs with stopwatch function and are made by prestigious manufacturers. Why not turn to the direct competition and avoid the long wait?

Alternative #2: Breitling chronometer in place of the Cosmograph

The problem in the search for suitable Daytona alternatives is that the prestige of the Daytona cannot be ignored. It is regarded as a legend and is traded as such. In the world of Wall Street investment bankers, for example, it is believed that a Daytona should not be worn until one has become Vice President. Rumour or not, this sums up the Daytona's image quite well, which raises the question: which watch can compete with it?

Alongside the models we've already mentioned, we'd like to introduce you to another watch, which is as prestigious as the Daytona and as famous as Rolex itself: the Breitling Navitimer 01. Although the Navitimer is a chronograph with a tachymeter scale and chronometer certification, its origins aren't in motorsports, but rather in aviation. The series was developed to simplify complex calculations during flight, it has long since made its way from the cockpit into the hearts of watch enthusiasts. The Breitling Navitimer does not need to compete with other watches and therefore embodies its own unique charm. 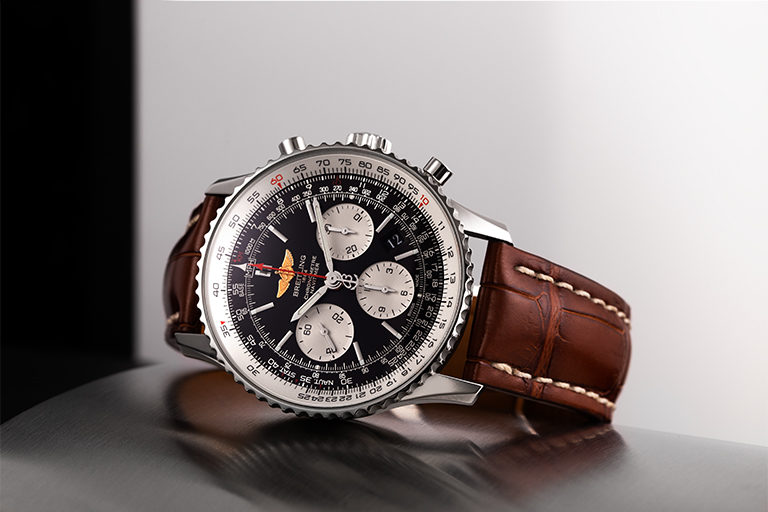 Alternative #3: A historic chronograph from Omega

To infinity and beyond – but most definitely as far as the moon! When it comes to prestigious chronographs with an eventful history, sooner or later the Omega Speedmaster enters the picture. It is the only watch to have passed all of NASA's tests and become standard issue for the astronauts who were the first men to land on the moon with Omega watches during the Apollo 11 mission. This makes the Omega Speedmaster Chronograph the first wristwatch that not only ever left this planet, but also landed on another body in space. The Rolex Daytona has not yet achieved a comparable feat – although it hurts a little to admit that fact.

Whether you actually purchase the Moonwatch or find another version of the "Speedy" is of course entirely up to you. What is certain, however, is that the success of the Moonwatch has rubbed off on the reputation of all other Speedmaster versions, making them immortal. If you wear a Speedmaster, you will definitely project the kind of professionalism you need to fly to the moon or save the world like James Bond. 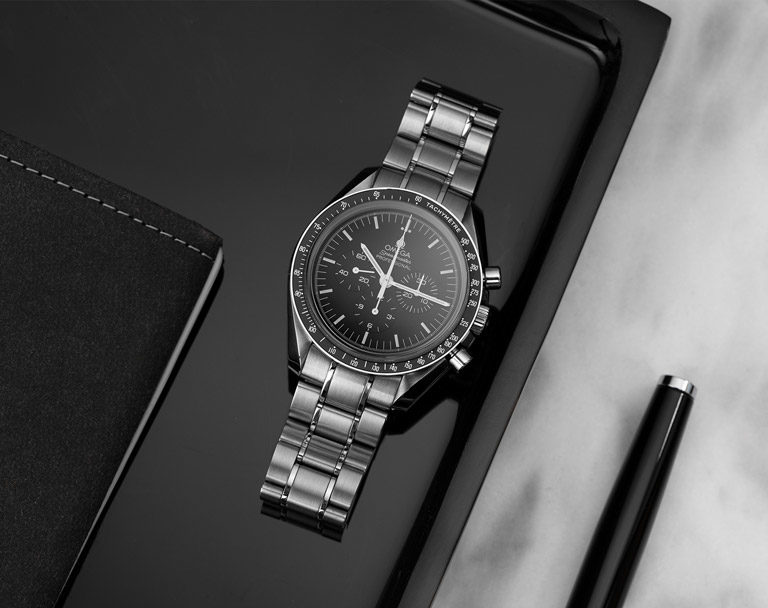 Alternative #4: The siblings of the Daytona

If you still prefer a Daytona at list price, we have another option for you. Put yourself on the waiting list and bridge the seemingly endless waiting time with a close relative of the Daytona. This relationship extends to Rolex itself. Rolex' subsidiary Tudor is the only one of the many Rolex sub-brands that has been able to establish itself in the market. 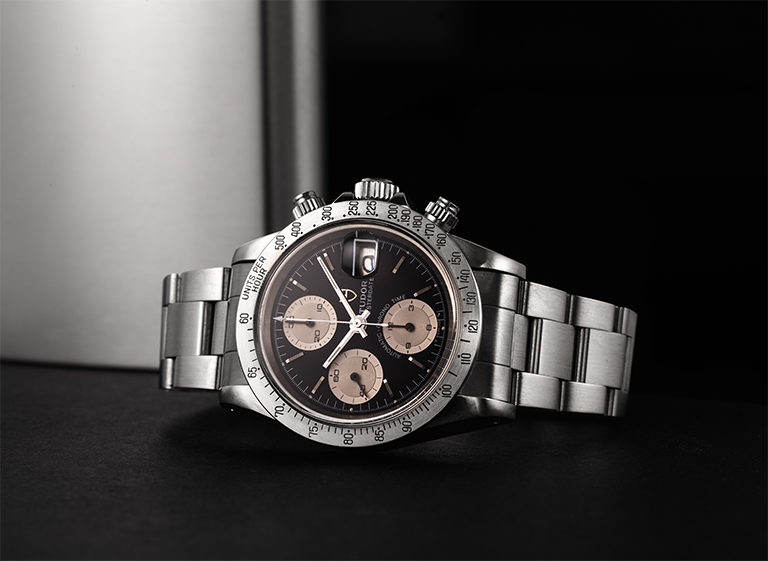 
Especially the early Tudor models at the beginning of the company's history are visually similar to Rolex watches. It is therefore no surprise that Tudor also launched its own chronographs after the release of the Rolex Daytona. This chronograph looks very similar to the Daytona and does not differ much in its functionality. Fans of the classic Daytona design should consider the Tudor Oysterdate Big Block, while fans of a more modern look might be happy with the sporty Tudor Black Bay Chronograph Dark. But if you like the Rolex Daytona mainly because of its genes, Tudor has a model for you that is visually and technically virtually identical to the Paul Newman's legendary Daytona and even more to that of Sir Jackie Stewart. The Tudor Oysterdate Chronograph is now only available as a pre-owned model, but is much easier to get than comparable versions of the Daytona from the same period. The perfect watch to shorten the eternal wait for your Daytona.

Alternative #5: Stay in the black with this model

Quality and design do not necessarily mean that you have to exceed your own financial limits. On the contrary, the manufacturer Schwarz Etienne proves this with its affordable Chronograph (Ref. 7750). This watch has a stainless steel case and bracelet, a black dial with three totalizers at 6, 9 and 12 o'clock and day and date windows at 3 o'clock. It also features screw-down pushers, an automatic calibre and a tachymeter scale on the bezel that lets you measure speed up to 750 km/h. Visually, this watch definitely keeps pace with the Daytona from Rolex. You can find this available at Watchmaster for as little as €1,000 – the ultimate proof that quality may come at a price, but it doesn't always have to cost a fortune. 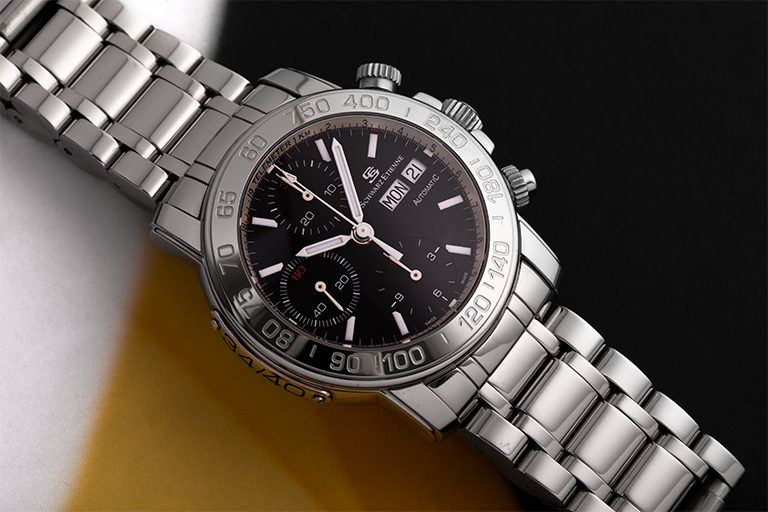 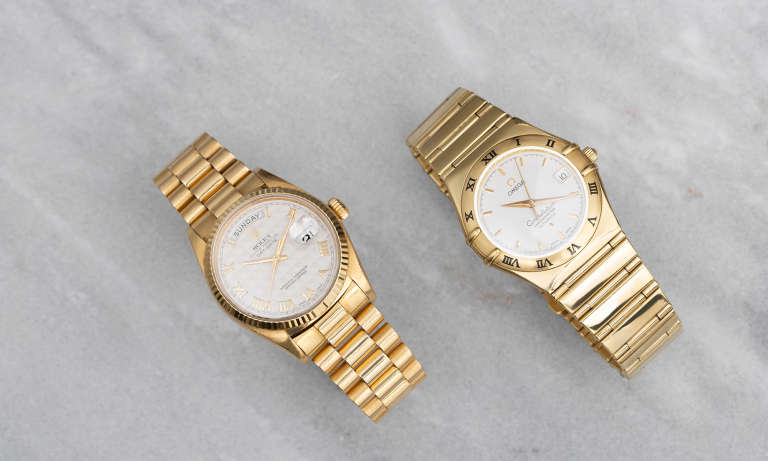 Gold watches at Watchmaster – the perfect watch for any budget

Gold. Throughout history, this shiny precious metal has held an undeniable fascination for mankind. Mythological legends and stories revolve around this element. From the Greek King Midas, who could turn anything into gold with a mere touch, to the Germanic Siegfried, who stole the gold of the Nibelungs from the dragon Fafnir, to the massive golden treasure of the fire …

END_OF_DOCUMENT_TOKEN_TO_BE_REPLACED 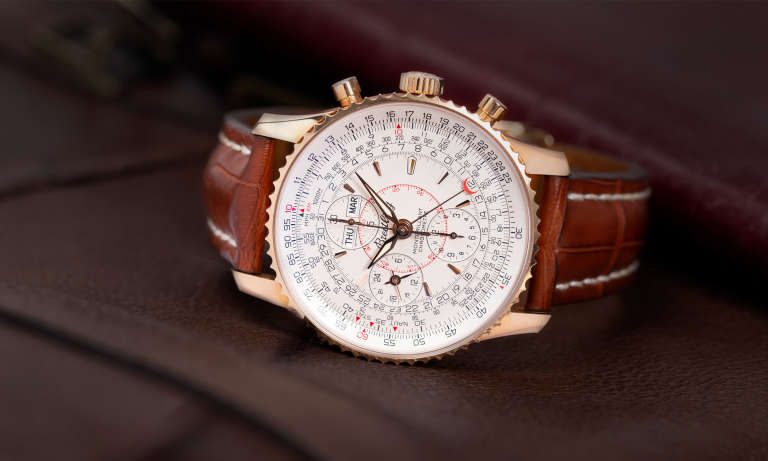 10 reasons why we love Breitling

When one thinks of Swiss luxury watches, it is precise wristwatches of excellent quality that come to mind, so it is no wonder that the name Breitling is also mentioned often. The company is one of the world's largest manufacturers of timepieces with virtually indestructible, bold designs. Even if it is hard to constrain the list to just ten reasons, we'd like to share ten …

END_OF_DOCUMENT_TOKEN_TO_BE_REPLACED 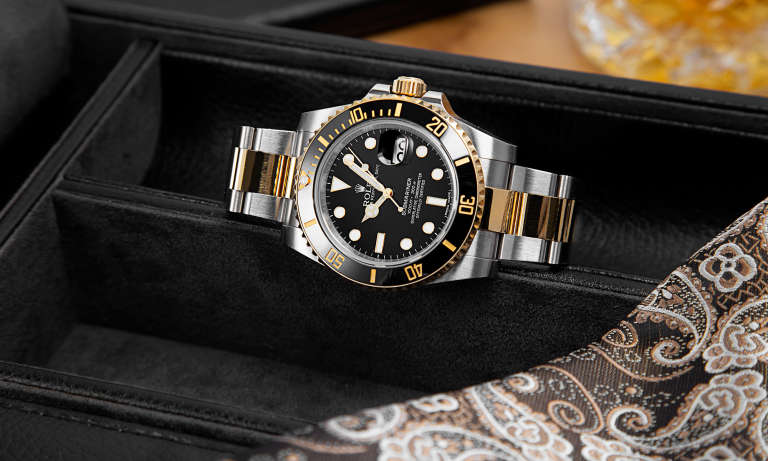 Does the desire to buy your own Rolex watch burn inside you? Surely you already have looked into the subject of watches, studied the market a little and know about the problem of the very long waiting lists for certain models. That's why buying a Rolex watch second-hand is so convenient. And, naturally, it might be possible to find a bargain. However, if you are still …

END_OF_DOCUMENT_TOKEN_TO_BE_REPLACED 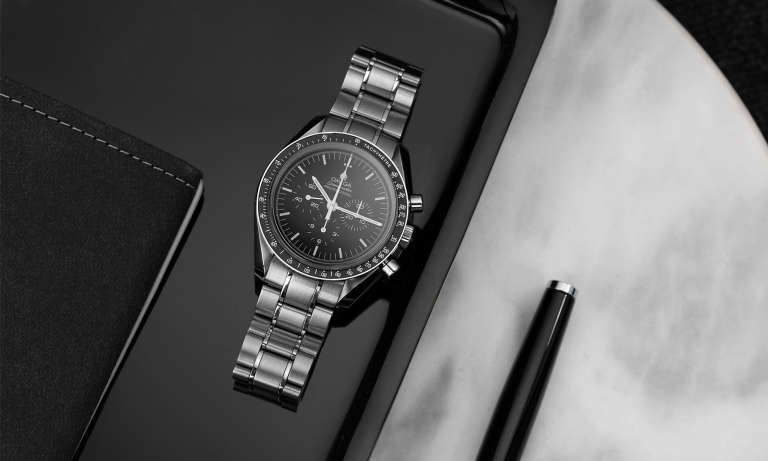 This is certainly not how many people imagined the start of 2021. Swiss watch manufacturer Omega has announced the discontinuation of the Speedmaster Moonwatch on January 5, 2021. We are talking about two specific references here. Why the current Moonwatch models have been taken out of production and whether there will be successors to the references 311.30.42.30.01.005 and …