There is great anticipation amongst watch enthusiasts! This year, from march 21 to 26th is the annual „Baselworld“. Taking place in Switzerland, it is considered the most important and largest watch fair of the industry.  Compared to previous years, there will be some changes this year but we can still look forward to exciting news from Rolex, Breitling, TAG Heuer, Patek Philippe and many more.

However, some well-known manufacturers won’t be attending this year. Why this is the case, which brands this concerns and what Baselworld has to offer this year, you’ll find out in the following article. 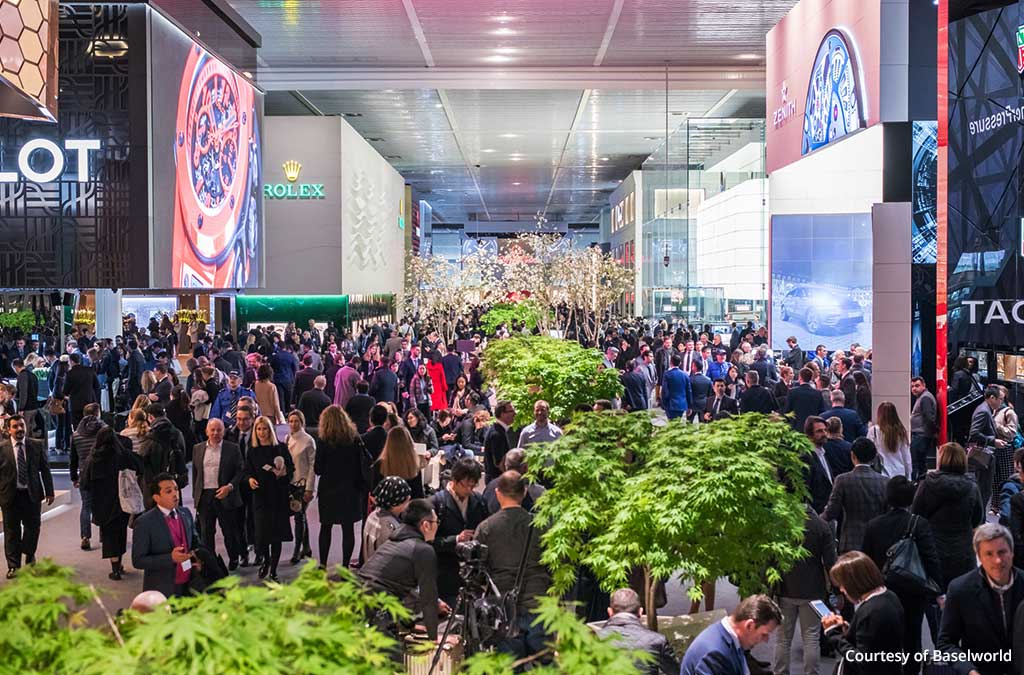 The development of the most important watch fair

Baselworld first opened its doors in 1917, and at that time it was a jewellery and watch fair. Initially, there were only 29 watch manufacturers among the 800+ exhibitors, as the fair focused on Swiss manufacturers. It wasn’t until 1973 that the fair called itself the „European Jewellery and Watch Fair“. The number of exhibitors had risen significantly – but also the trade visitors thronged the fairgrounds, with a total of 60,000 in 1975. Eleven years later, the fair was also opened to non-European manufacturers and quickly established itself as a figurehead of the luxury watch industry.

In 2003, the fair officially renamed itself to Baselworld and soon established itself as the most important hub on the watch market. The number of visitors and exhibitors grew steadily, with 150,000 visitors in 2015 and in 2016 the 1,500 manufacturers was a particular highlight. However, these records were followed by two hard setbacks. From 2017, the number of trade visitors dropped to 106,000, with official visitor numbers not being published. From 2017 to 2018 half of the exhibitors left the fair, so only 650 were left.

The hosts understood this very clear signal and then decided to modernise the Baselworld 2018 and make it leaner, which is why the fair now only lasts six days. In fact, the number of exhibitors halved again last year, with only 650 companies presenting their products and novelties. Baselworld will again be limited to six days this year. One thing is certain about the exhibitors: the Swatch Group has completely renounced Baselworld. 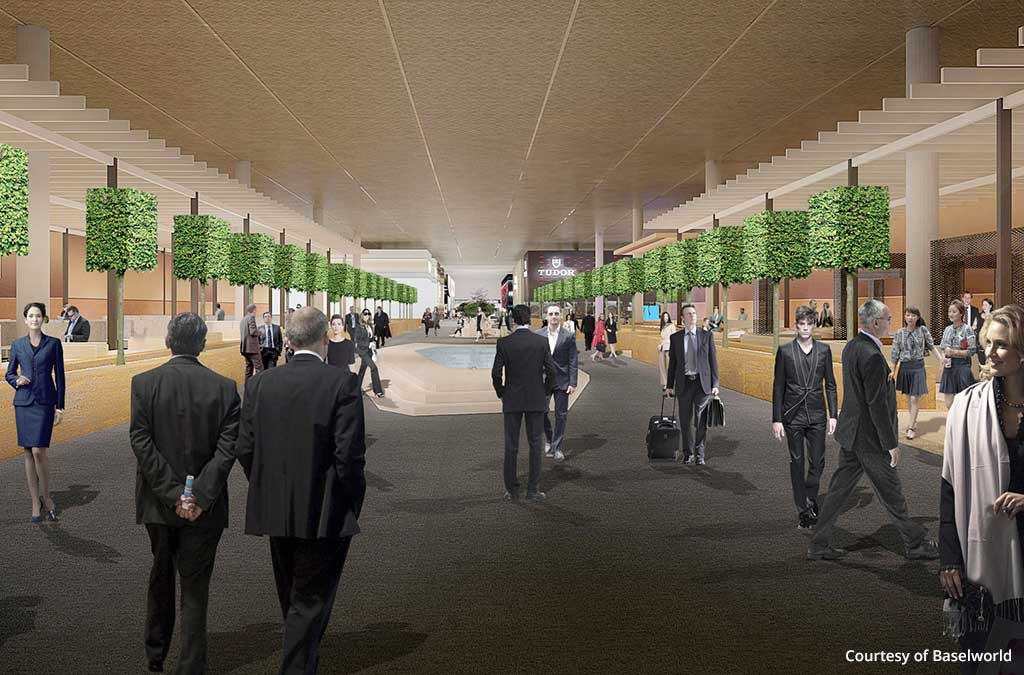 Leaving of the Swatch Group

Like many other major brands in the watch industry, the Swatch Group is well known for not participating in Baselworld this year. Of course, the group does not want to completely abandon contact with the trade fair customers and instead, they have started its own parallel event in Zurich, which takes place from the 19 to 26 of March. The big problem for Baselworld: The Swatch Group is the parent company of numerous prestigious Swiss luxury brands. Blancpain, Breguet, Glashütte Original, Hamilton, Longines and Omega will all not participate. And that was just a small excerpt from the Swatch Group portfolio. According to a statement of CEO Nick Hayek, the company no longer sees any reason to present itself at traditional watch fairs. It is time for change, moreover, actual business does not take place at the fairs. Even without Baselworld, the brands of the Swatch Group are known all over the world, but in times of digitisation, people now have to reorient themselves. Ultimately, the high exhibition costs are an annual investment that no longer pays off. The fair is therefore also intended for direct customer contact and own boutiques to seek personal and quick advice. 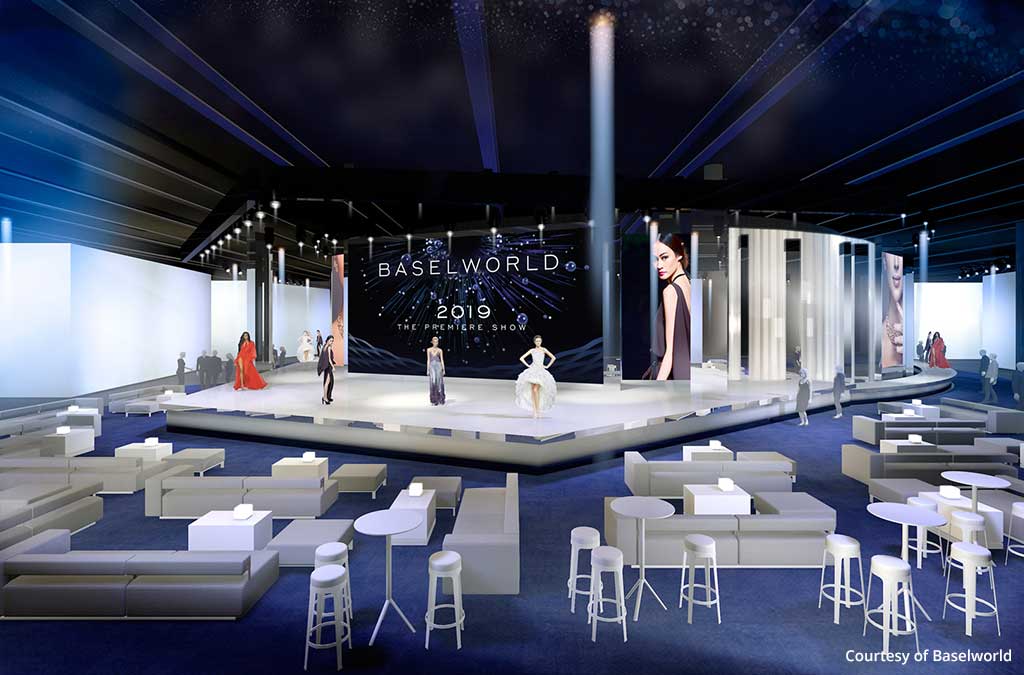 What awaits the visitor

The absence of the brands of the Swatch Group not only brings negative aspects: Visitors and exhibitors alike are likely to be wooed with much more attractive offers. For example, price limits for room rental were negotiated with the local hoteliers, as in the past an overnight stay in Basel during the trade fair was extremely expensive. Also a minimum stay was completely forbidden.

There will be a lot of changes at the fair itself. The organisers have already developed a new concept in the summer of 2018. For example, the jewellery area, which is still an important part of the fair, was significantly expanded and relocated above all in Hall 1.2. As a result, the jewellery area is more centrally positioned which attracts visitors: The „Show Plaza“, a 240 ° – event stage lies opposite. In hall 1.1 there will be extensive catering offers, the area is called „The Loop“. The independent watchmakers are also moving, they will now present their timepieces in Hall 1.0 South. This part of the fair has not yet been used as a showroom, but new ideas are also creating new spatial concepts. Events are planned exclusively for the dealers, and the doors for journalists are opened the day before. The background to this is to strengthen the event, communication and marketing character of the fair. Since Baselworld has made every effort to be unique and surprising every year, all new formats have also been closely coordinated with the exhibitors.

What about the future?

At the moment, nothing can be said about how Baselworld will develop. Every year, the organizers bring heaven and earth into motion to create an unparalleled experience. Every year, the fair is different, each year the exhibitors show incredible masterpieces, novelties and facelifts of their creations.

Whether and how many manufacturers will follow the example of the Swatch Group over the next few years is difficult to assess today. On the other hand, hardly any manufacturer talks about fairs which are more than two years ahead – one wants to remain market-oriented and practices restraint.

There will be news from 2020 until at least 2024: the Baselworld and SIHH hosts and organizers have agreed to adapt the fair dates to one another. This particularly appeals to trade visitors who are travelling from far away: If the two most important events in the industry take place in succession, jewelers and concessionaires from abroad will only have to travel once for the long way. The agreement will initially be valid until 2024.

The Source of Gossip

Do not worry: Rolex will be present at Baselworld 2019. Enthusiasts and industry insiders are rumored to have Rolex’s new unpredictability continuing this year. Antimagnetic watches are currently envogue and the Milgauss have been missing an update for a long time, which is why they 2019 would be a suitable candidate for a new iteration. The Submariner Date, like the GMT Master II, could be updated with the new 3235 caliber, which seems already safe and more of a timing issue. Perhaps Rolex associates this with an adaptation of the Submariner to 36mm, so that it is also wearable for narrow wrists (and potentially as a ladies‘ watch). It gets more speculative with the GMT Master II collection. With three new models introduced last year, it seems logical that changes will be made to them this year, such as the integration of the new 3285 caliber or bezel and wristband variations. After the Batman (in black and blue) is likely to lay down its mask, the series also has room for a two-color model. Many collector’s hearts even dream of a GMT Master II Coke with a black and red bezel.