Rolex is indispensable from sport, whether as a sponsor, partner or timekeeper; where success is celebrated, Rolex is not far away. The Swiss luxury brand has been the official time emitter for the Wimbledon Championships since 1978. The world’s oldest and most prestigious Grand Slam tournament takes place in London for two weeks each summer, bringing together world-leading players on the green grass. 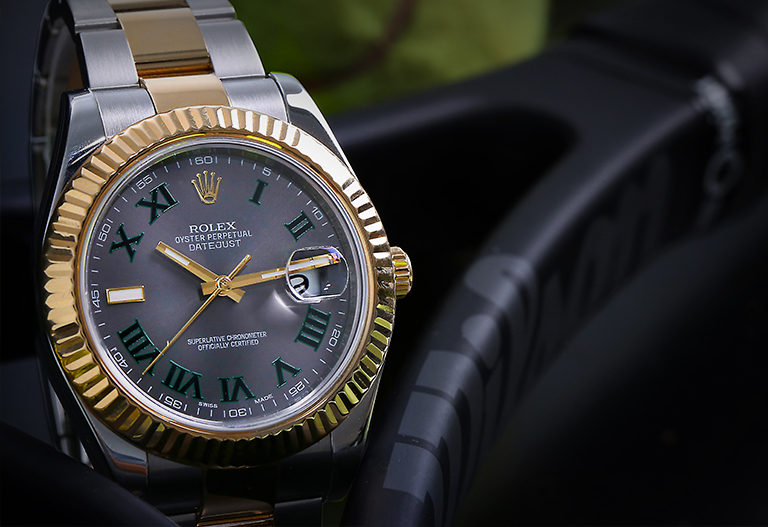 Rolex has been actively involved in sports for almost a century and supports exceptional talents. It all started in 1928 when Mercedes Gleitze became the first woman to swim through the English Channel: Rolex equipped her with a wristwatch with a newly developed Oyster case, a compound that made history. After 15 hours and 15 minutes Gleitze failed due to unfavourable weather conditions but the Rolex had passed its first official endurance test with flying colours. Over the decades, Rolex has established itself in all major team and individual sports. Tennis was long regarded as an elitist sport, and membership of a tennis club required the invitation of another member. Over time, the sport has become accessible to everyone with big tournaments inspiring the masses. 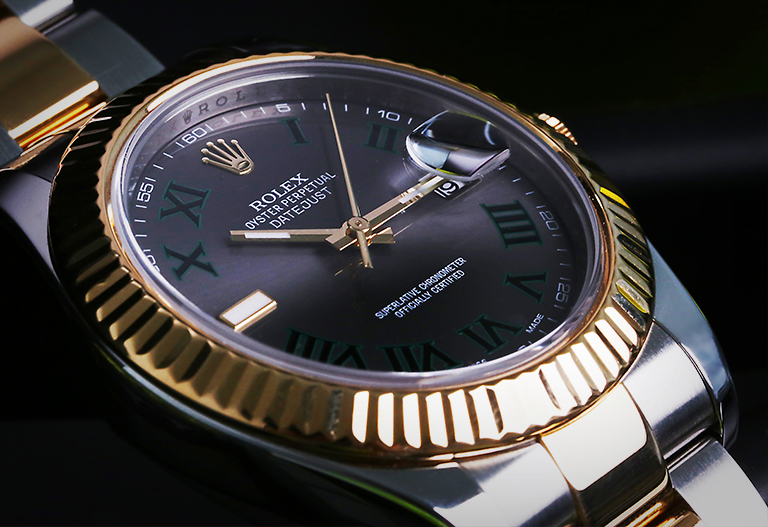 Wimbledon Championships is not only the oldest, but also the most prestigious tournament in the „white sport“ and is considered the ultimate discipline of all Grand Slam tournaments – a perfect match for the secret king of the watch industry. With Wimbledon and Rolex, two greats have come together that perfectly master the interplay of tradition and innovation. The biggest Grand Slam tournament is the only one that still insists on traditional rules of the sport. Players must wear 90% white clothing, play on English grass, and during the breaks, strawberries with whipped cream are served to the spectators. The sense of tradition may seem outdated at first, but is the greatest strength and long-term success strategy of the tournament. The same can be said about Rolex. The watch manufacturer relies on traditional and timeless designs, equipped with the latest technology. Back in 1978, Rolex became the official time keeper of the Wimbledon tournament, a collaboration celebrating its 40th anniversary in 2018. Everything fits, even the dark green company logo of Rolex complements perfectly with the Wimbledon green, and the big Rolex time keeper watches have become the well-known background of numerous photos and video recordings.

Although both partners have a long tradition of technical innovation, since 2007 the tournament has been equipped with state-of-the-art computer technology, sponsored by Rolex, which closely tracks the trajectory of the balls and supports the line judges in their decisions. 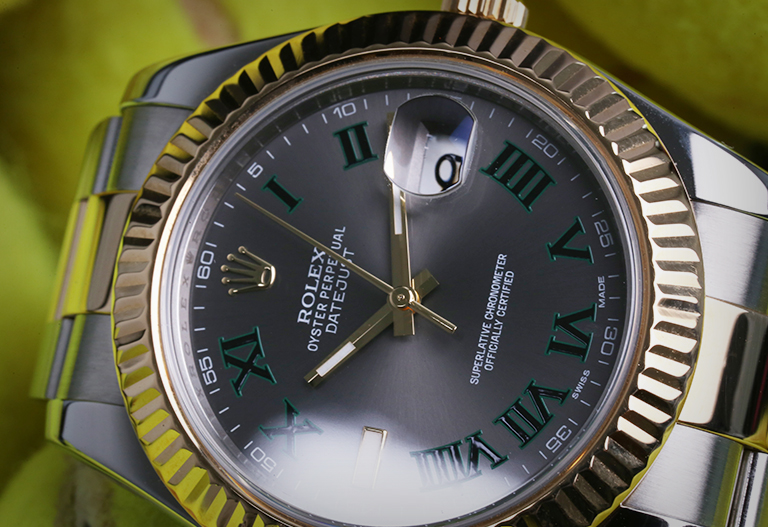 Rolex and its brand ambassadors

Rolex not only supports the tournament as the official time keeper, but also plays a major role in the promotion of exceptional athletes. Roger Federer is not only a brand ambassador, but also an avid watch enthusiast. The Swiss tennis player is the record title holder at Wimbledon and again this year’s number 1 on the list of participants. With a total of 8 Wimbledon titles, he holds the record for most titles in the mens competition and is also defending his title after his victory in 2017. His 20 Grand Slam titles also make him a record holder in this discipline. In the women’s category, 2017 we saw Spaniard Garbiñe Muguruza win her second Grand Slam title. In addition to Federer, the German tennis player Angelique Kerber, the Bulgarian Grigor Dimitrov and the Danish Caroline Wozniacki are all brand ambassadors for Rolex. 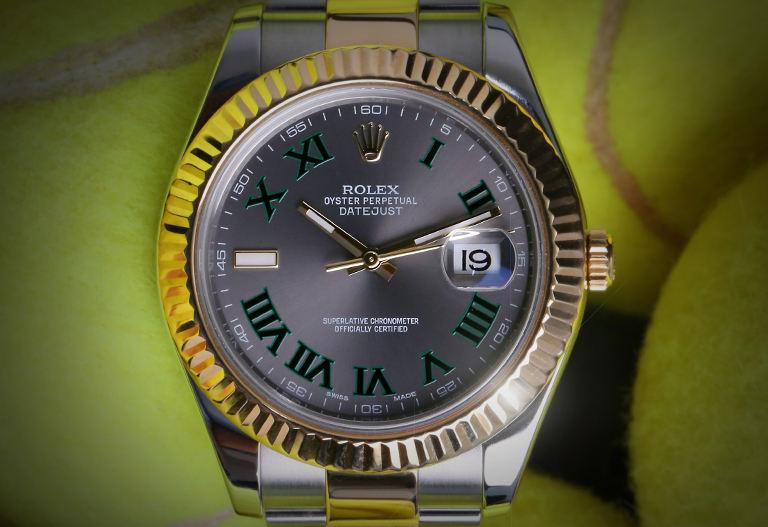 Of course, there is also a specific Rolex watch associated with this event: The Rolex „Wimbledon“. In 2009 Rolex introduced the Datejust II 116333, which got its nickname because of its special dial in slate grey. The Roman numerals on it are in black and outlined in green – “wimbledongreen”, reminding us simultaneously of Rolex and Wimbledon. At Baselworld 2016 an updated version of the Datejust was introduced. Ref.: 126303 is also available with Wimbledon Dial. In the course of this year’s Grand Slam tournament, it has already appeared on many social media channels, mainly because it is a favourite of the current defending champion, Roger Federer. He even wore his Rolex „Wimbledon“ at the award ceremony. The Rolesor model has a case diameter of 41 mm and radiates with a cambered bezel for the tennis star to compete with. Its predecessor model had a 48-hour power reserve, which was extended to 70 hours in the new model. Equipped with a Rolex Manufacture movement caliber 3235, it is a reliable companion and combines traditional design with the latest technology – in the style of Rolex and Wimbledon. 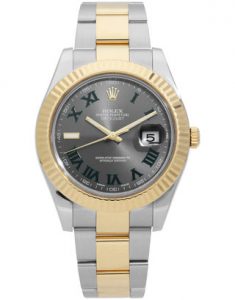