50 Years of Moonlanding – Reaching for the Stars

Speedmaster goes to Space: The Omega Speedmaster Moonwatch celebrates the 50th anniversary of the moon landing

Most watches fascinate by constant innovations and an adaptation to the trends of the time, but most watches have never been on the moon. For over 60 years, the Omega Speedmaster Moonwatch has stood out for its iconic design, reliability and durability. To mark the 50th anniversary of the moon landing, Omega is celebrating this with an exclusive anniversary watch: the Speedmaster Professional Apollo 11 50th Anniversary Edition.
However, the road to this point was not an easy one … 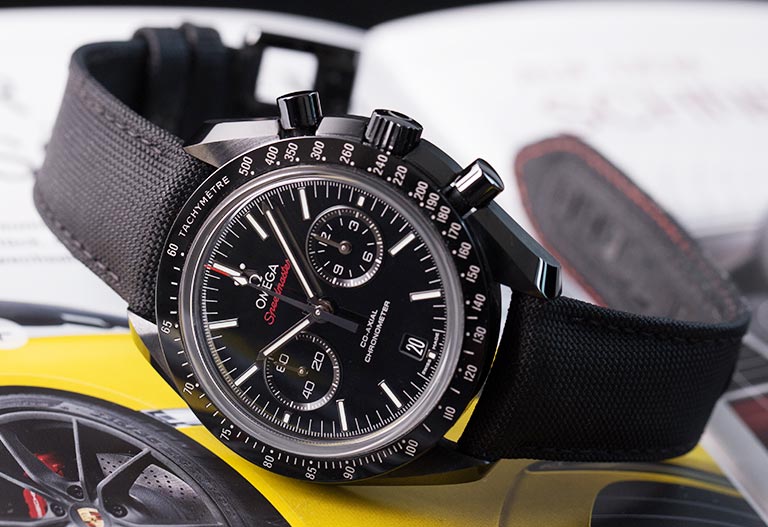 In 1957, the Speedmaster formed the Master trilogy together with the Seamaster and the Railmaster: functional watches that mastered all the stresses and strains of the job. The first model of the Speedmaster was the Ref. CK2915, which surprised the watch world with the first external tachymeter bezel. Produced from 1957 to 1959, this model is particularly recognizable today through its wide clock hands and the “ Tachymeter Base 1000 “ steel bezel.

Speedy goes to Space: The Speedmaster’s first trip into space

In 1959, the CK2915 was replaced by the CK2998, which boasted the new „Alpha“ clock hands. Walter „Willy“ Schirra was one of the seven astronauts selected for the Mercury project – the U.S.’s first attempt to bring humans into space. On October 3, 1962, he boarded the Sigma-7 spacecraft and made six round-trips around the Earth. On his wrist: The Omega Speedmaster CK2915, which he had bought on his own behalf for his time in space.

Edward Higgins „Ed“ White, was part of the Gemini 4 flight in 1963, the first long-distance flight of an American crew. When the spaceship was on its third orbit, White opened the hatch and was the first man ever to move out into space. Thanks to his hand-held controls, he was able to move easily and photographed both the Earth and the spacecraft. He was wearing the Speedmaster 105.003, the first Speedmaster to be tested and certified for space missions by NASA. 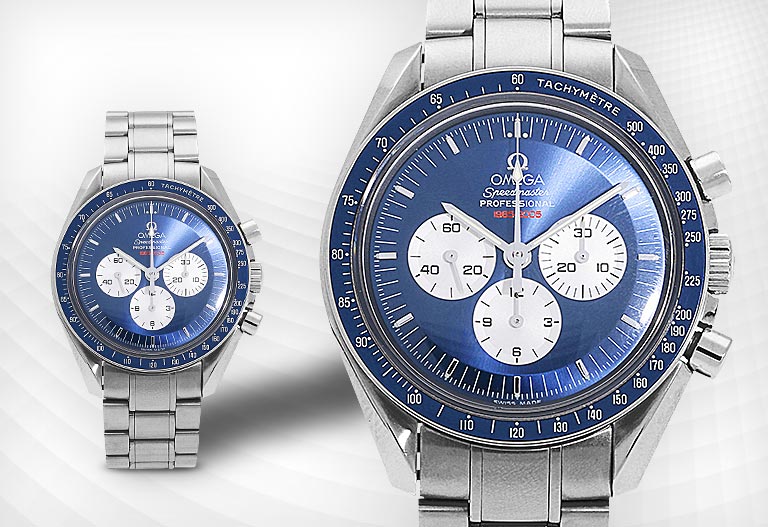 The birth of the “True Moonwatch”

In 1964 Omega launched the „True Moonwatch“ with the Speedmaster 105.012. The optical changes that the Speedmaster had undergone until then were quite significant. Tachymeter bezel and the clock hands changed designs several times. The dial was no longer smooth, but slightly curved downwards at the end. Omega also changed the luminescent materials and switched from radium to tritium. The Speedmaster 105.012 rounded this metamorphosis off by establishing an asymmetrical body. Together with the crown protector and the lyra-shaped approaches, this established the design that is still identified today with the Moonwatch. It was also the point at which Omega began to promote the watch as a „Speedmaster Professional“. In 1968, the watch was updated to calibre 861. 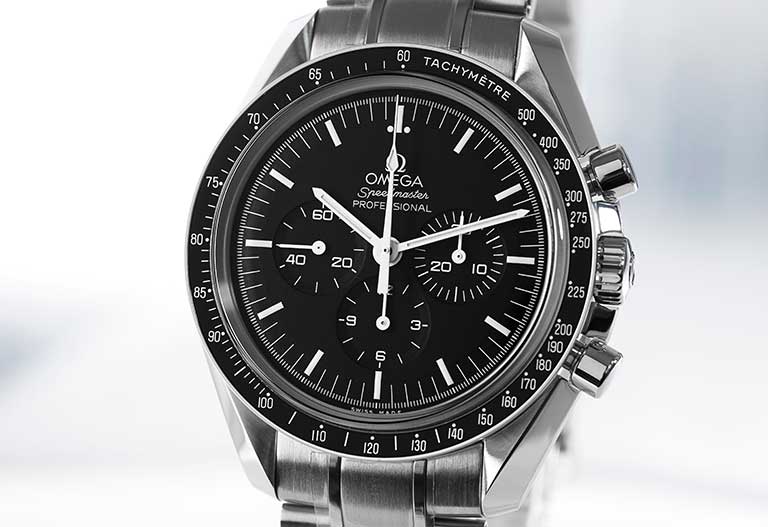 Take Me To The Moon And Back

The Speedmaster was used during all Apollo missions, but it only happened with the Apollo 11 when the clock would land on the moon. As you probably know, it wasn’t Neil Armstrong, but Buzz Aldrin, who wore the Speedmaster as he walked on the moon. Armstrong left his model in the spaceship as a backup because the ship’s electronic timer was malfunctioning.

The Speedmaster as a lifesaver

After that, the Speedmaster should continue to be used – in some missions even as a lifesaver. When the oxygen tank of the Apollo 13 was not working proper in 1970, a Speedmaster was used to time the critical entry into the atmosphere. The slightest deviation or miscalculation would have caused the crew‘ s death. But the Speedmaster performed, the manoeuvre succeeded, and NASA awarded Omega with the Snoopy Prize for flight safety. Omega celebrated this in 2015 with the limited Apollo 13 Special Edition (Ref. 311.32.42.30.04.003), on whose minute totalizer a sleeping Snoopy is resting. 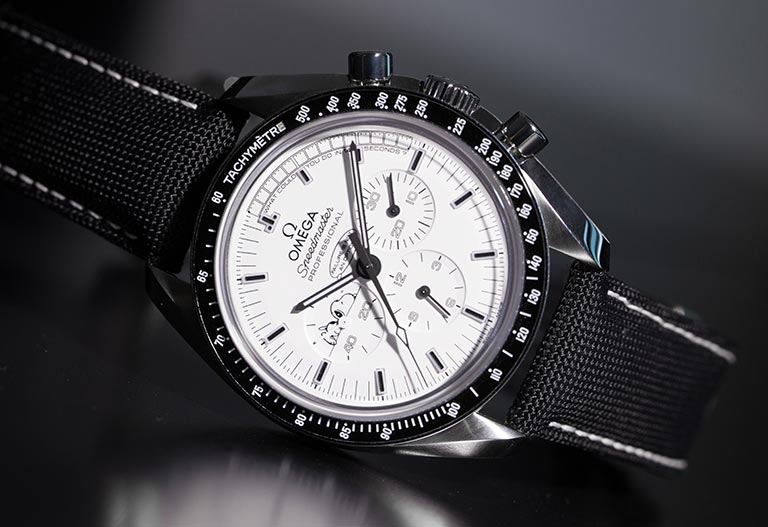 A design that proves itself: The Speedmaster 3570.50

The last radical change the Moonwatch underwent was in 1997. Ref. 3570.50 (or 311.30.42.30.01.005 as it is known in today’s catalogue) remained visually true to the real Moonwatch, but got two internal changes. Luminova replaced the slightly radioactive tritium as luminescent material and the movement was updated to calibre 1861, which has 18 instead of 17 jewels.

Omega Speedmaster Professional: from mother earth, along the moon to mars

Don´t be worried of a halt. Omega launched a couple of special editions who give credit to the Moonwatch. One of the most outstanding designs had the 2004 released „“Moon to Mars”“ (Ref. 35775000-20), it´s three totalizers have been replaced by Mars, Moon and Earth. 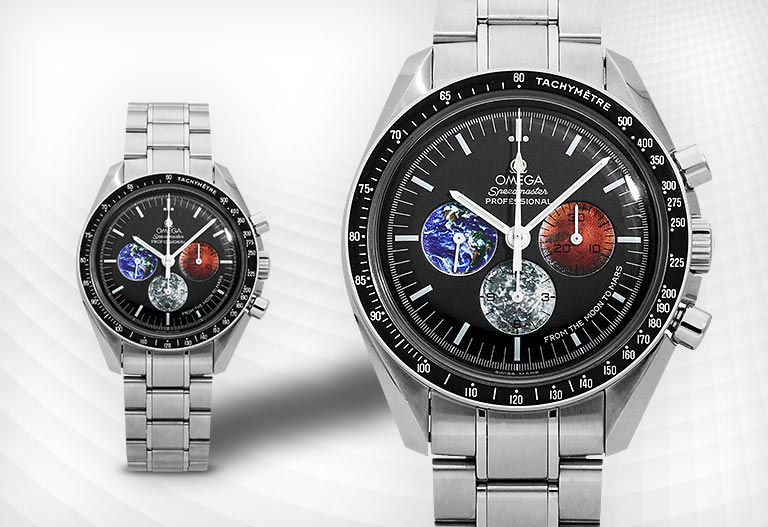 Anyone who now thinks that Omega is not celebrating this anniversary in 2019 with an exclusive special edition knows the brand very little. Neil Armstrong and Buzz Aldrin are equally represented on the Moonwatch anniversary watch (ref. 310.20.42.50.01.001). The minute totalizer shows an engraving of the photo Neil Armstrong took when Buzz Aldrin got out of the cockpit to step on the moon as well. So, this is the moment shortly before the Moonwatch finally becomes the Moonwatch. On the back of the anniversary watch is the photo Aldrin took of his own footprint, which is ensnared in Armstrong’s probably most famous words: „That’s one small step for a man, one giant leap for mankind.“ The watch is limited to 6,969 pieces and has the exclusive calibre 3861, which replaces the calibre 1861. 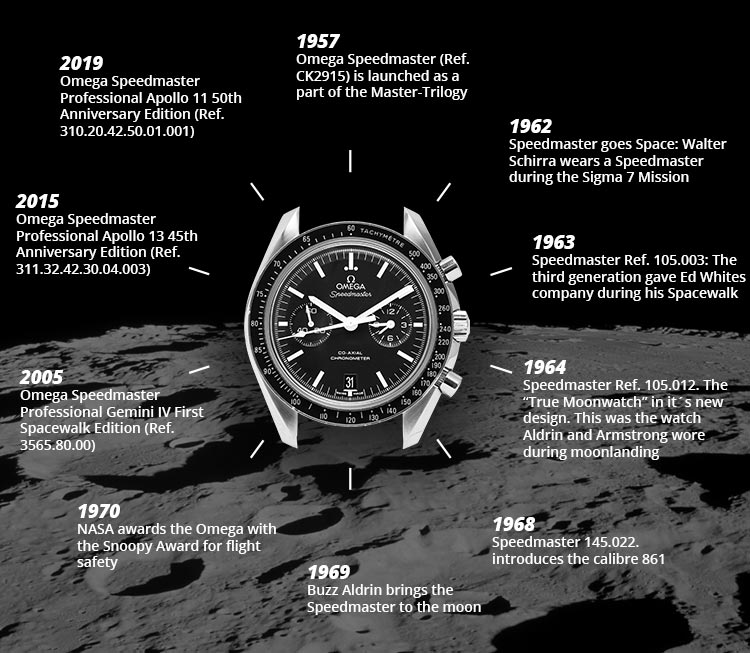