The "Big Five" of the Swiss watch industry

They are among the biggest and strongest in the world. They are the undisputed elite of Africa's animal kingdom and have long been the target of human greed: the lion, elephant, leopard, African buffalo and rhinoceros. Collectively they form Africa's "Big Five". A similar picture emerges in the Swiss watch industry far from the endless sandy deserts and picturesque oases of the African continent. However, elephants last saw the Swiss Alps during the time of Hannibal, and it's hard to think of a time when lions or rhinos were sighted around the ski resorts of Sankt Moritz. Instead, the "Big Five" of Switzerland are the undisputed titans of Haute Horlogerie.


The "Big Five" of the watch industry

The lion from Genf: Rolex

It goes without saying that Rolex sits atop of the "Big Five". Based in Geneva, the most prestigious watch brand of all time can already look back on a rich and eventful history. The company not only invented the first water-resistant watch, the Rolex Oyster, but also brought the world of watchmaking the first automatic calibre – two features of a high-quality wristwatch that are indispensable today.

If you take a closer look at the Day-Date (Ref. 118238), which is arguably one of the brand's most eye-catching watches, you will notice an intriguing number of similarities to a lion. Take the Rolex logo, for example: the infamous crown. In literature, the lion is often described as the king of animals and, naturally, the king wears a crown on his head. But let's go one step further: the bezel's fluted shape elegantly frames the dial on this luxurious timepiece accentuating the face of this royal-looking predator much like the mane. Finally, we must mention the colour similarity of both the watch and the animal. The gold of the Day-Date shines on its wearer just like the fur of a lion in the glowing Sahara sun. 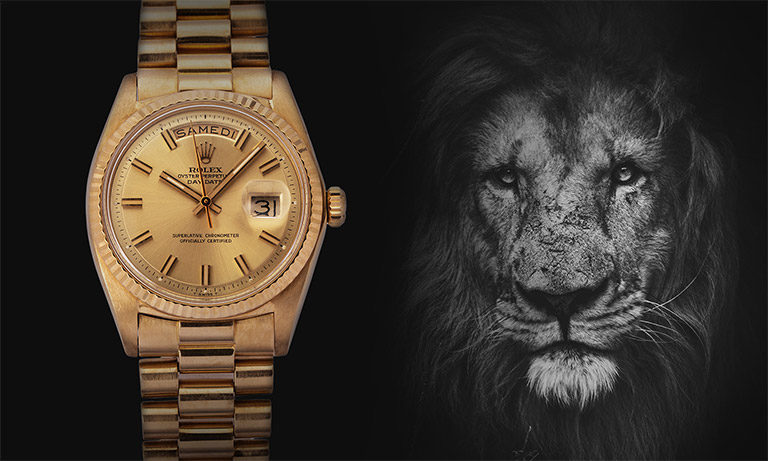 As mighty as an elephant: Hublot

Elephants, like watches from Hublot, are immense and utterly impressive. The futuristic look of Hublot watches have made them extremely popular with sportsmen and musicians. And rightly so, the timepieces of the Nyon-based luxury brand are made from the most precious and occasionally extravagant materials – and their appearance is quite polarizing.

To overlook a watch from Hublot is akin to failing to notice the metaphorical elephant in the room. You may be able to pretend to ignore both, but you will know for sure that it's still there. It is possible to find certain similarities between Hublot watches, in our case a Big Bang Evolution (Ref. 301.SB.131.RX) and African pachyderms. For one, there is the obvious size of Hublot's timepieces. In comparison to the aforementioned Rolex Day-Date, the Big Bang Evolution is 8 mm larger in diameter. Like an elephant, a watch from Hublot is very difficult to hide. With a bit of imagination, you can even see an elephant's head in the Big Bang Evolution. Looking at the watch's front, the black parts on the right and left of the case look like the head of an elephant with ears on both sides and a trunk apparent in the shape of the bracelet on the bottom. 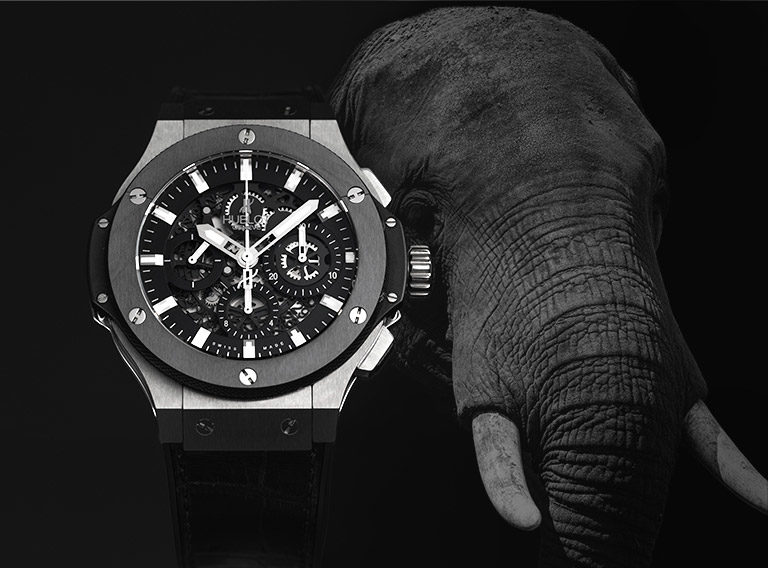 Omega is also one of the largest and most influential brands in the Swiss watch industry and they are one of Rolex's toughest competitors. In Biel/Bienne, however, people follow their own path, rely on their personal instincts and, above all, are not intimidated by the roar from Geneva. A leopard and Omega have a lot in common: both radiate strength, self-confidence and superiority. Furthermore, they tend to be more prone to understatement, which cannot be said of Hublot, for example.

Admittedly, the Anniversary Limited Edition (Ref. 311.63.42.30.03.001) of the Omega Speedmaster Chronograph is not exactly reminiscent of a leopard. However, we do notice some parallels to a close relative of the leopard – the panther. These rare animals are characterized by a black fur coat and bright yellow eyes, which resembles this watch from Omega with its midnight blue, nearly black dial and its bright yellow gold case. With its history as the first watch on the moon, the "Speedy" has a following at least as large as that of the most famous panther of all time, "Bagheera", from Rudyard Kipling's The Jungle Book. Even its flagship brand ambassador, the British superspy James Bond, exudes an elegance similar to that of the graceful panther. 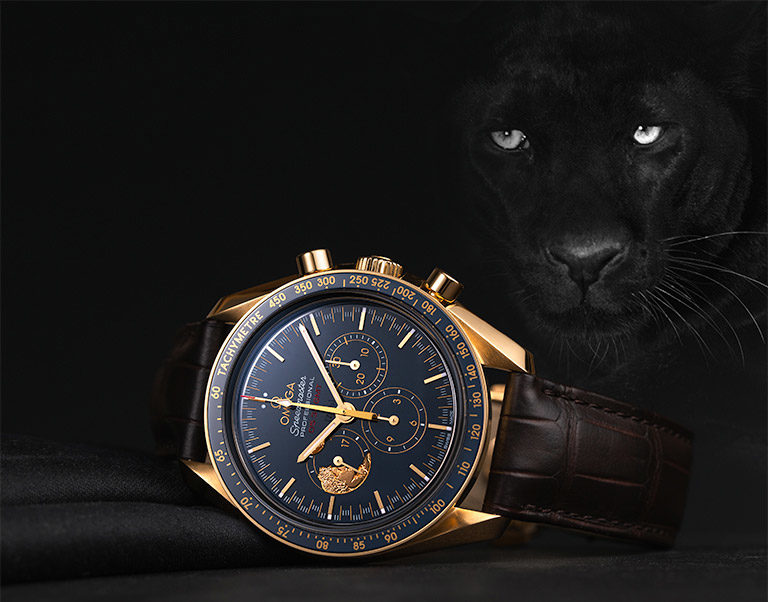 No fan of the lion: TAG Heuer

The watch manufacturer TAG Heuer is also, without doubt, one of the "Big Five" in Switzerland. Its animal counterpart would be the mighty African buffalo and a long-standing struggle links it to the first of our "Big Five". While the tension between lion and buffalo stems from their different positions in the food chain, the tension between Rolex and TAG Heuer has its roots in one single year and watch model.

In 1963, TAG Heuer and Rolex released the Carrera and the Daytona, respectively, a chronograph specifically designed for motorsports and, in the case of the Rolex, including a cosmograph. With it, the battle for supremacy on the world's race tracks began. The rivalry between the two companies continues to this day, but in spite of all the likability of the African buffalo in this competition, the lion must be taken seriously. In the animal kingdom, however, many lions have been put to the test by the horns of an unflinching bull, which is why the competition between these two will no doubt remain an interesting spectacle in the future. 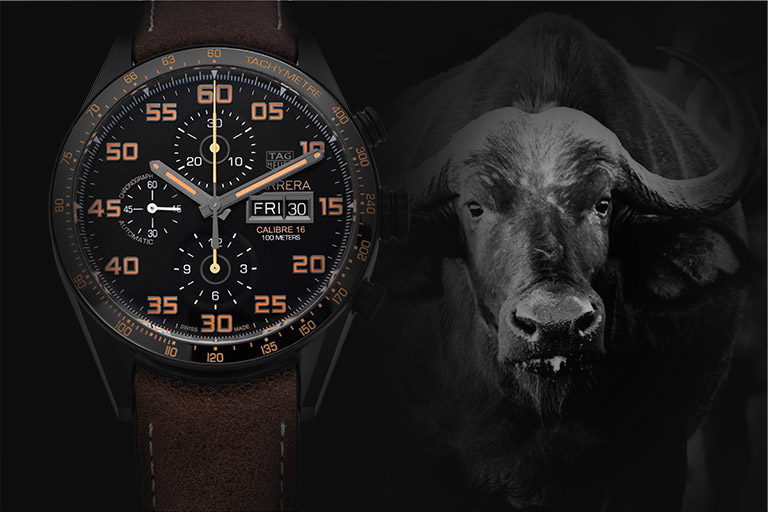 The rhinoceros and the brand Breitling round out our list of the "Big Five" luxury watches. But what does a high-precision watch by Breitling have in common with a rhinoceros? Just like the mighty rhinoceros of the African steppe, Breitling does not face any natural threat on the international watchmaking scene. The company is virtually untouchable. While the lion and the leopard may be more elegant than the rhinoceros, they would never dream of messing with a colossus weighing several tons. The same goes for Breitling and its competitors. They tolerate each other, but leave each other in peace as much as possible. Breitling's conspicuous, massive design has been unmistakably associated with the precise pilot's watches made by the Grenchen-based watchmaker.

In general, Breitling watches are notable for their huge cases, which sit firmly on the wrist. A watch like the Breitling Super Avenger (Ref. M13370), with its matte dark grey colouring and a boastful case diameter of 48.4 mm, inevitably evokes the spirit of one of these gentle giants and helps one understand why almost nothing can harm a Breitling or a rhinoceros.  These two heavyweights march powerfully and confidently through their respective worlds. 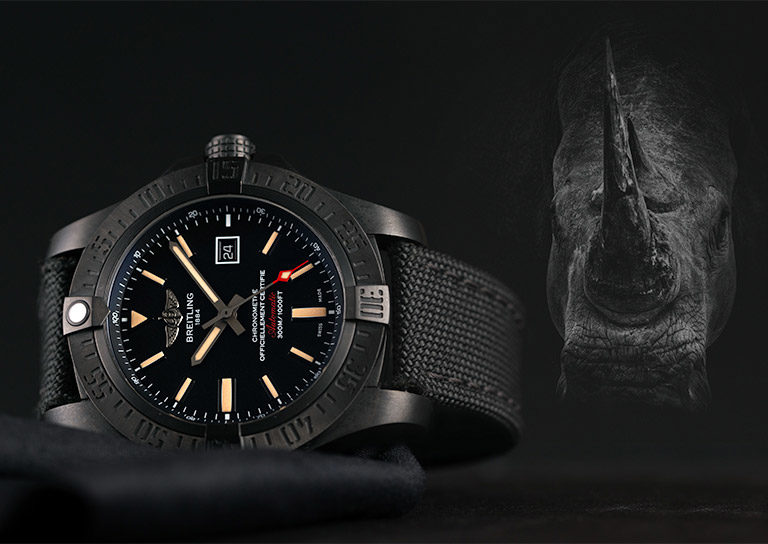