Film villains and their watches

What would a story be without truly sinister villains? A hero wouldn't become a hero at all, because there would be nothing and nobody to protect humanity from. And let's be honest, we all want to see a good antagonist on screen. One who never makes it easy for our hero and puts the world in fear and terror. Which is why we'd like to take a closer look at some of the biggest movie and TV villains and particularly at their luxury watches.


Which watches do film villains wear?

Bond’s antagonists and their watches

The most famous secret agent in the world would have never come this far if there were not always people that had made it their goal to knock the world out of orbit. Many already know that the secret agent has a keen eye for expensive luxury watches. Some of his opponents, however, also stand out for their particularly exquisite taste in timepieces.

The man with the golden watch

Francisco Scaramanga, the man with the golden gun, from the 1974 film of the same name, offers an absolute rarity. His Rolex Cellini King Midas is one of the most unknown and rarest Rolex models ever. As you would expect from a man who assembles his pistol from everyday gold objects such as ballpoint pens and cigarette cases, his watch is made entirely of gold as well. Visually, it may not be everyone's cup of tea, but this model in particular stands out as it guarantees to catch the attention of others with its absolute exclusivity.

The watch of a banker

Bond villain Jean Durand, better known as "Le Chiffre" from Daniel Craig's first Bond film "Casino Royale" (2006), is a different story: this criminal banker relies on a Longines Evidenza with the reference L26564536 during the poker tournament he is hosting. This elegant stainless steel chronograph radiates what you would expect from the watch of a banker: style, sovereignty and understatement. With a watch like this, Le Chiffre is able to radiate luxury and give his customers the secure feeling that their money is in good hands with him. A fallacy, as we learn at the beginning of the film. 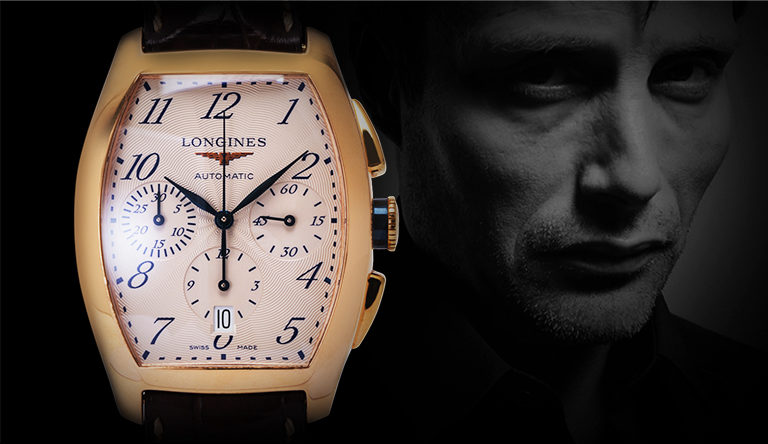 The approach of Blofeld's henchman and hitman "Mr Hinx", played by Dave Beautista, may be less cunning, but all the more brutal. The brawny colossus in a tailor-made suit is not too bad to get his hands dirty, which is why a delicate watch would hardly fit his lifestyle. In "James Bond 007: Spectre" the unscrupulous killer wears a Rado D-Star automatic chronograph as a watch for his mostly uncomfortable everyday life – a successful balancing act between dress and tool watch. 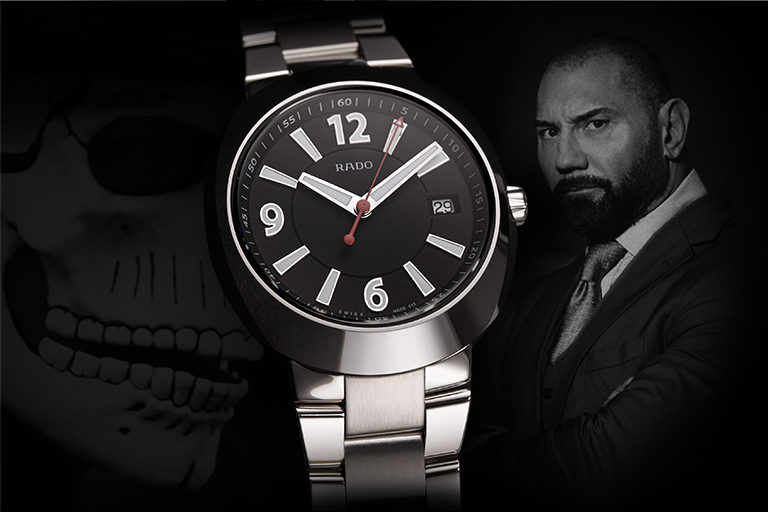 Rotten to the core: The watches of psychopaths

Of course, not every movie villain is a villain with a secret hideout in a volcano, a dangerous super weapon or a pool full of piranhas, over which the hero dangles while his antagonist explains his elaborate plan to him. The following two characters are of a different, dark and uncomfortable variety, but with a good sense for exquisite timepieces.

Dr Hannibal Lecter, psychiatrist, passionate hobby cook and cannibal from the TV show "Hannibal" enjoys the finer things in life: expensive suits, good wine, occasionally a filet mignon and his luxury watch, which in this case is a Moonphase Chronograph from the Patek Philippe Grand Complications series. With an approximate price between € 180,000 and 250,000 new, Lecter makes an unmistakable statement. The ice-cold and man-eating psychiatrist is apparently a fan of understatement. His watch seems noble and reserved, but at the same time it's anything but cheap, thus clearly proving that the doctor is wealthy and has excellent taste – the latter of which, however, it is clearly a matter of perspective.

Two faces and one Rolex

Psychopaths must like it respectable. The next bad guy is no exception. Patrick Bateman, successful investment banker and serial killer from the movie "American Psycho", has one goal above all else: to make it into the upper ten thousand. Obsessed by the perfect business card and pursued by wild murderous lust with axes and chainsaws, a single exclusive watch, a Rolex Datejust made of gold and stainless steel, accompanies him through his seemingly more than stressful everyday life. This represents a tangible piece of success for Bateman. Interestingly, the Rolex isn’t seen in any film scene in which Patrick Bateman is at work on his victims. Why? Rolex insisted. The Swiss luxury watch manufacturer was afraid of damaging its image should the Rolex be on the killer's wrist in action. 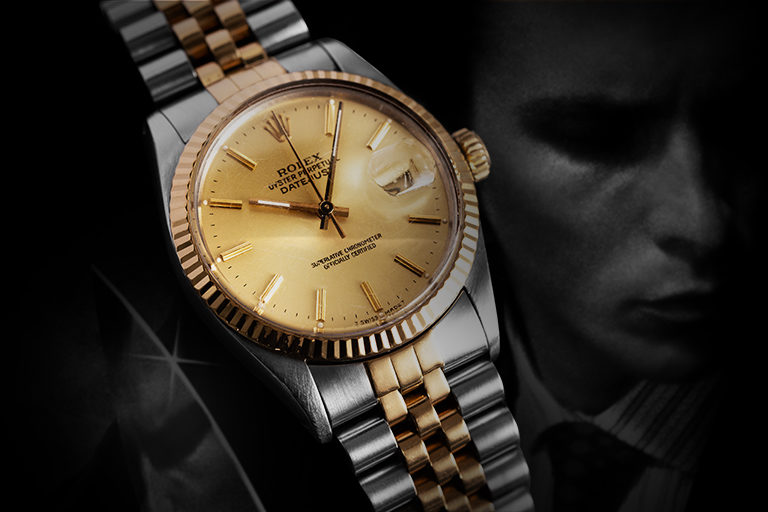 Luxury watches in a gangster’s paradise

When talking about the watches of movie villains, of course, the classic gangsters and their timepieces shouldn't be forgotten. Muscle-bound and asserting their authority, they keep cheating the heroes and making their lives more difficult.

Machine guns, explosions and cigars: these are the recurring themes of the "Expendables" series. In the third part, the troupe around the mercenary Barney Ross, played by Sylvester Stallone, has to fight against an ex-member from their own ranks, the arms dealer Conrad Stonebanks. The felon, played by Mel Gibson, relies on the following companion for his infamous deeds: a Breitling Colt Chronograph with a white dial. This robust and stalwart watch performs its duty stoically, unimpressed by external influences and radiation, and is indispensable in the fight against the world and a troop of trigger-happy musclemen teeming with testosterone.

The watches of the Mafiosi

The next character on our list is the gangster from a TV series. James Gandolfini in the role of Tony Soprano is the head of one of New York's Mafia families and has everything: a wife, children, a big house, great cars, money and power. In short, he has reached a certain status that screams for a fitting symbol. Which watch would be more appropriate than the watches of presidents, popes and the Dalai Lama? Just like them, Tony Soprano relies on his Rolex Day-Date made of solid 18-carat yellow gold. This watch, however, occasionally appears quite small on his wrist reflecting his personal success and leaving no doubts about its owner. 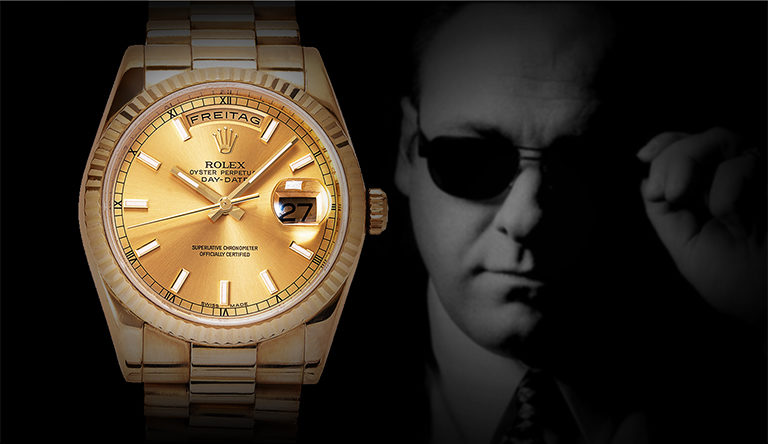 
After the series finale of the "Sopranos", lead actor James Gandolfini is said to have bought luxury watches worth over $500,000 and given them away as a thank you to the entire team of the series. Quite a few of these watches are said to have been completely made of gold. By the way, while Gandolfini was on his deathbed in a hospital in Rome, his personal Rolex Submariner was stolen from his hotel room and has yet to be recovered.

The timing of a drug baron

Vince Gilligan's drama series "Breaking Bad" about Walter White, a high school teacher recently diagnosed with cancer, became an absolute blockbuster. Apart from the thrilling plot, the choice of the ex-teacher and up-and-coming drug baron's watch is also interesting. At the beginning of the series, he wears a down-to-earth Casio CA53W Calculator on his wrist, he shows up later with a TAG Heuer Monaco, which symbolizes his transformation from a simple chemistry teacher to an unscrupulous, but life-affirming drug lord.

His business partner and friend Jesse Pinkman gives him the aforementioned TAG Heuer as a birthday present. White uses its highly precise stop watch function to keep the two-minute time window in which a total of nine witnesses are to be killed in three different prisons. After exactly two minutes, White's phone rings and he receives the confirmation that his plan has been successfully completed. 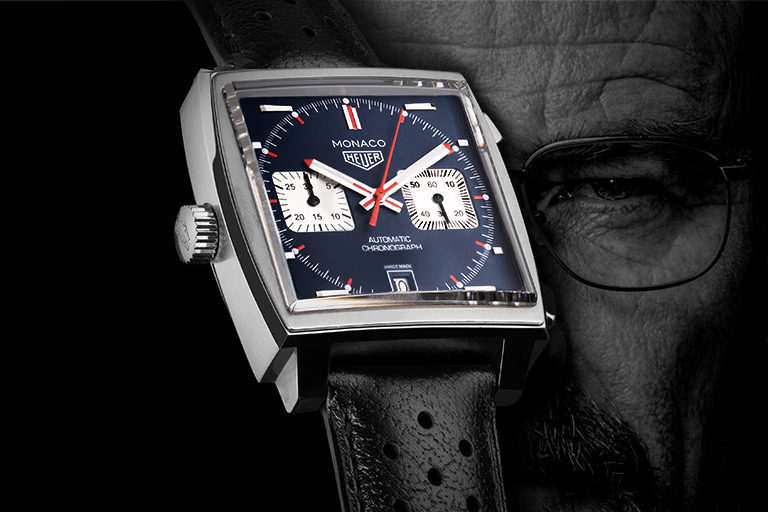 Finally, this movie villain, who scares even his own kind, is also notorious for his clock – as well as for his green leather robe and his big mouth. After having devoured an alarm clock, the belly of the crocodile in "Peter Pan" ticks away and its sound sends icy shivers down the back of pirate Captain Hook. Since this is a classic alarm clock, we assume it could be the model Glocken-Wecker Quartz (Ref. QHK035R) by Seiko. However, since it is a cartoon clock, we cannot be absolutely certain that this speculation is correct.

It is fair to say that not only the heroes of the screen, but also their villainous counterparts have shown admirable taste in choosing their watches and – at least in this respect – it is quite difficult to choose a favourite.