From radioactive vintage to collectors knowledge: A Brief History of Rolex Dials

From radioactive vintage to collectors knowledge: A Brief History of Rolex Dials

Before we get started, we want mention what this is not about. Although we want to provide a brief overview of the evolution of Rolex dials, this is not a detailed guide to vintage Rolex models. Since there is still too much speculation in this area in particular and there are false rumours, this makes a precise classification and analysis currently very difficult. In addition, we barely touch on the subject of processing radioactive materials in the watch industry here. This topic is so interesting and extensive that we dedicated it a special article. So here’s a short introduction to the history of Rolex’s dials and examples of Datejust and DayDate with their extravagant designs. 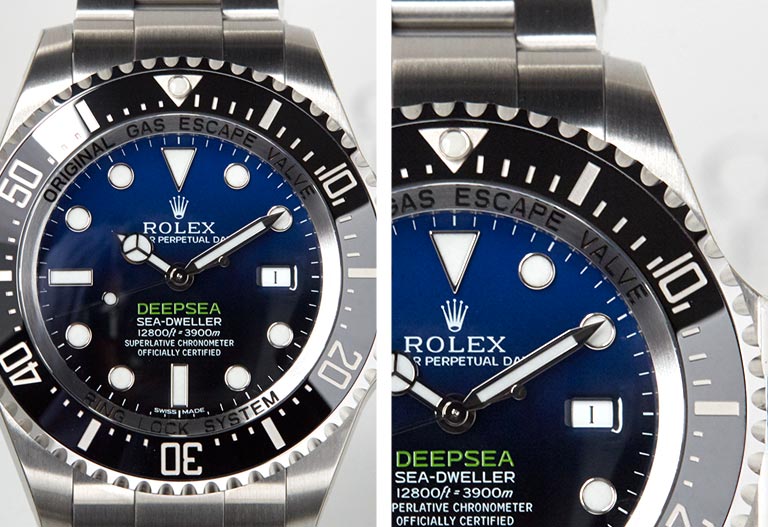 As seen in many industries, the history of the watch industry is above all a history of shifting traditions and invention of new materials. When industrial-made watches prevailed around 1930, they were not sold directly to the customer, but to jewellers who served as middlemen. Accordingly, Rolex marked the dials not with its own name, but with a signet mark corresponding to the jeweller. This quickly changed after World War II, when manufacturers began to use their own name and logo. Rolex produced its own cases and movements, the dials and hands were made externally by Beyeler, Stern, Lemmerig and especially Singer.

Before the 1950s, it was easy to get an overview of the different variants and prototypes, as only a few were in circulation and Singer, for example, offered the same designs to both Rolex and Omega. Also, English was not yet established as a lingua franca within the industry, which is why it was very easy to determine the origin of the dial by the printed language. White dials were known as grenée (grained) and were very brittle and prone to moisture. The radium used for luminos mass often bled, leaving small dots around the numeral markers. 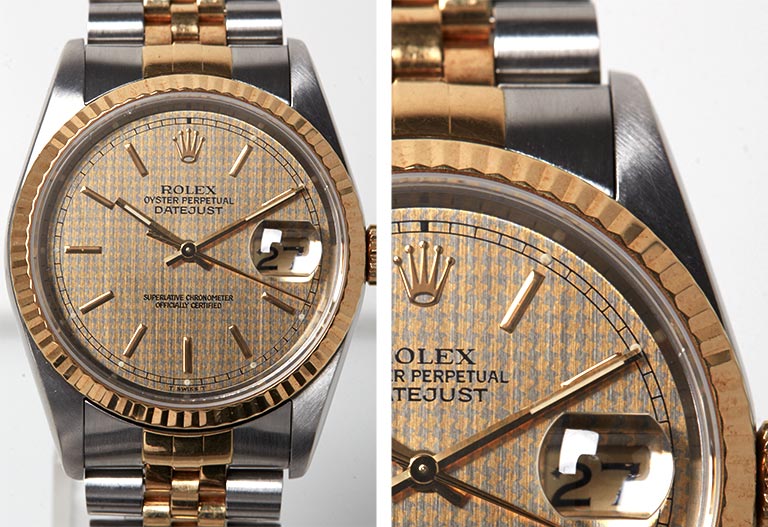 From Gold to Gloss: The evolution of the dials from the 50s till today

During the 50s and 60s, Rolex opted for different designs, making it difficult to classify. For its new functional watches such as the Explorer and Submariner, Rolex relied on the so-called „gilt“ dials as in the Rolex Submariner (Ref. 6536). Literally translated, this means gold or gold plated, but as always, the process is a bit more complex. By galvanizing a black layer is applied to the dial, which covers everything except the golden lettering. These are made in the process of backside printing, which makes them stand out even more. A transparent coating is then applied to the black layer. This protects the metal against rust and gives the watch a gloss finish. 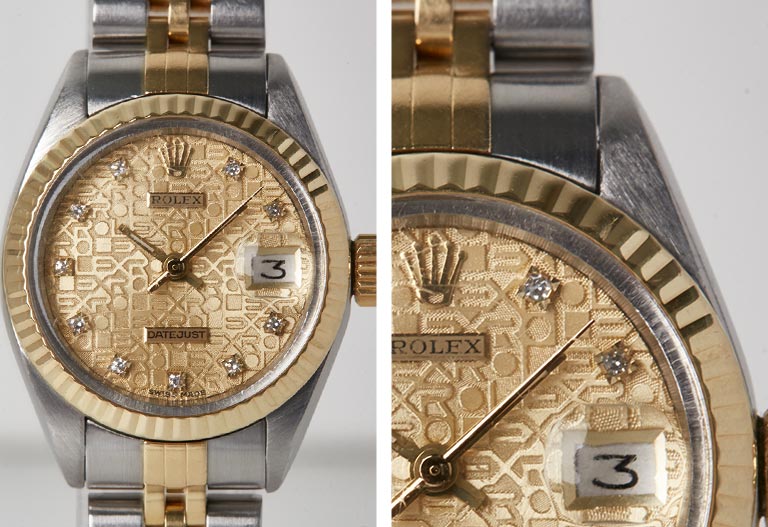 At the end of the sixties these gilded dials fell out of fashion and the matte variants with white lettering took over. For example, compare the previous Submariner with the model (Ref. 1680). However, this design change also meant the end of the Tropical dials. This subtype was created by a chemical process within the watch case, resulting in a deep, brown tone. This required special material combinations, which is why this effect is exclusively seen during two periods – 1958-1962 and the late 1960s to early 1970s.

The third and final change took place in the mid-80s when Rolex switched back from the matte dial to the shiny. The white lettering remained, but the hour markers were covered with white gold. Instead of radium and tritium, the modern Rolex now shines with Chromalight (blue) and Superluminova (green). The Maxi Dial, with its increased hour marking points, gave the dials a tremendous presence, celebrating its revival today in exclusive models like the all-green Hulk (Ref.: 116610 LV). 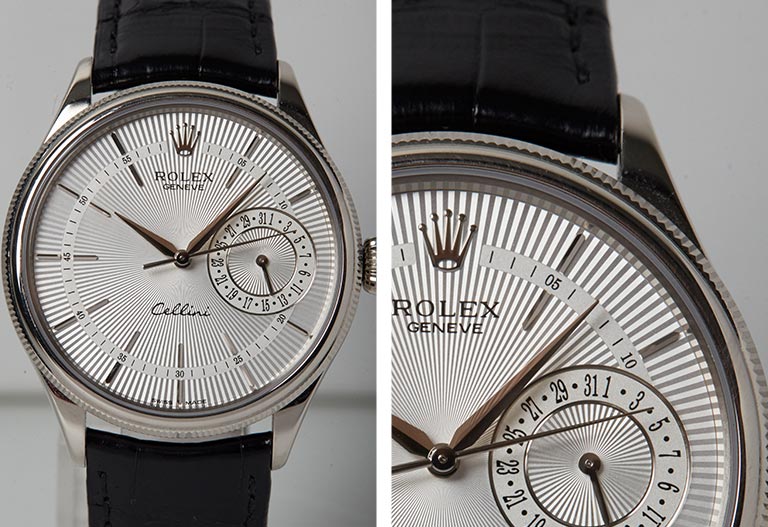 Rolex formal watches such as the Datejust and DayDate,  stood out especially in the 80s with their prominent dials and have a special reputation among collectors. These were made of precious stones such as onyx, meteorite fibers, lapis lazuli and jade or wood such as mahogany and birch. In the meantime, Rolex increased its focus on special finishes and embellishments for its Datejust. The tapestry design with its vertical lines on the Ref. 68240, or the concentric circles of Ref. 116203. The Jubilee dial of Ref. 78274 celebrates itself, in which the entire dial is marked  over and over with the word „Rolex“. Diamond dials like in the Ref. 116243 are watches known for using diamonds in the marking of the hours. 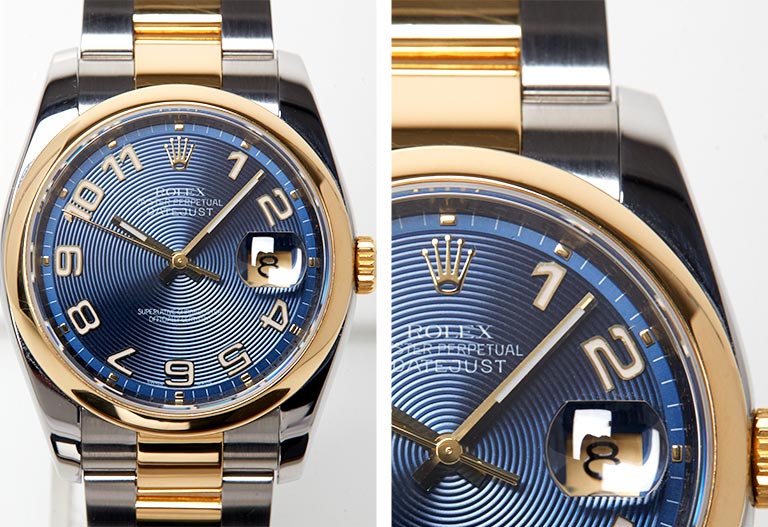 Another famous design is the houndstooth pattern decorating e.g. the Datejust Ref. 16233. On the other hand, one speaks of a Pave (pronounced „pah-vay“) design in the context with the Day-Date Ref. 118238 or Daytona Ref. 16519, when the entire dial is decorated with diamonds. Those who prefer optical effects will fall in love with the grid of pyramid-shaped dials, each square has a 3D pyramid oriented towards the center. You can also recognize dials by the striking color effects which they are known for. Bordeaux starts with a wine red and dissolves on the edges to black. Vignette mimics the same gradient, but begins with a deep blue. More classic is the Tuxedo dial of the Datejust Ref. 116200, which casts a black ring around its silver core. 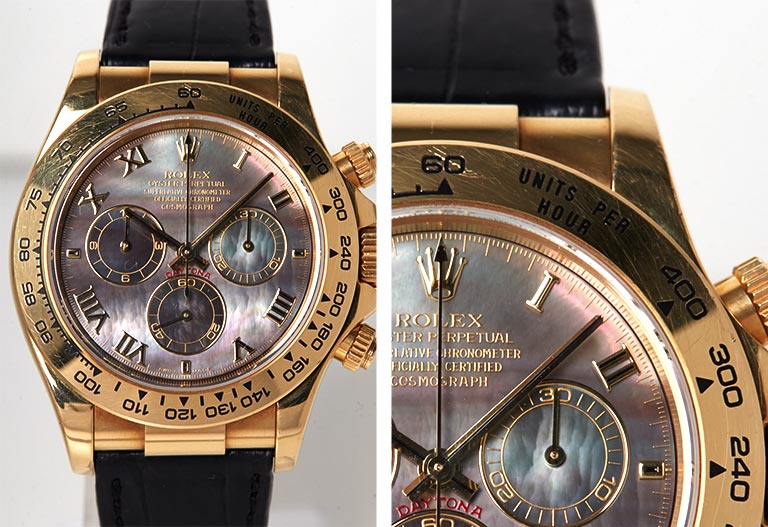 In recent years, Rolex has pursued a more traditional line in the design of its dials. This is particularly interesting, considering how innovative, curious and playful the last models present themselves. As much as one admires, for example, the rainbow lunette of the Cosmograph Daytona, one hopes that this creative tension will lead to Rolex also taking more chances with its dials. 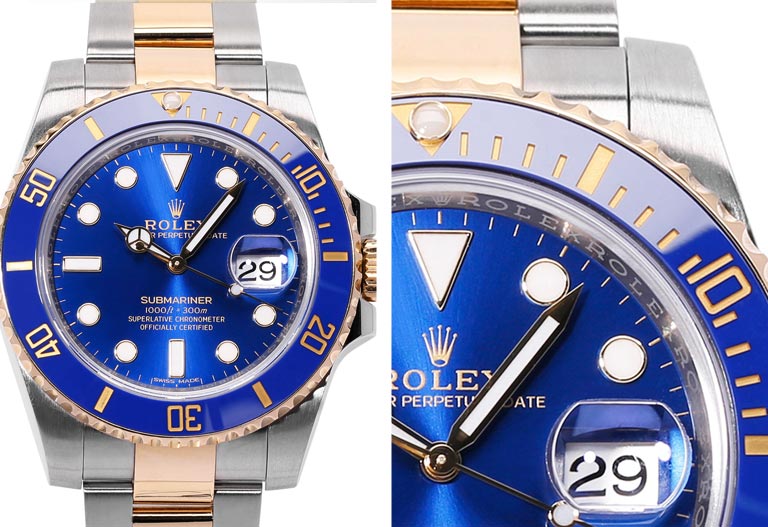