In expert circles, the Daytona nicknamed „Paul Newman“ has for long been highly demanded. In 2017 it received widespread publicity when Paul Newman’s personal wristwatch was auctioned off in New York for $ 17,752.500 – a sensational price that left watch connoisseurs speechless. The now world-famous reference has a mixed success story behind it. 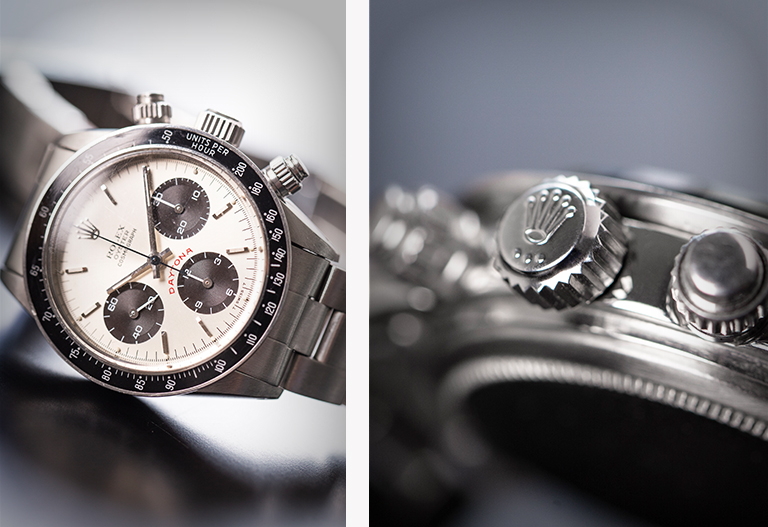 In the 1960s, the Daytona series sold rather poorly. Thanks to a famous wearer, however, the watch experienced a late renaissance and soon became a bestseller. Its fame is closely linked to the name Paul Newman. The blue-eyed actor wore his personal edition over several decades privately, in movies and at car races. During his career he was nominated for a total of 10 Oscars throughout his career and in 1987 he finally won one of the Golden Boys for the lead role in „The Color of Money“. A year earlier, he had already been awarded with an honorary Oscar for his life’s work, and in 1994 he also received another Oscar for his social commitment.

The exact trigger for naming the Daytona is controversial. What is certain, however, is that watch collectors in the 1980s began to call the 6239 „Paul Newman“ Daytona and thus gave it a strong rise in popularity. However, Newman did not only have a reference 6239, but also a „Big Red“ with reference 6263, which is also very popular among watch lovers and is still regarded as a stable investment with a good profit margin.

The story of the Rolex Daytona

The Cosmograph Daytona was introduced under this name in 1963. However, previous models with chronograph function had been produced by Rolex since the 1930s. However, these only bore the inscription „Chronograph“ on the dial. The so-called pre-Daytonas were not very popular. Today, however, they are popular collector’s items. At that time they were sold for about $200, today they partly reach prices of €20.000.

Even if it is hard to imagine today; The Daytona 6239 chronograph was not always a bestseller. In the 1960s, wristwatches were not very popular and sold poorly. Models equipped with the eye-catching Exotic Dial sold even worse, which is why they were also produced in very small quantities. Paul Newman’s personal copy was probably bought by his wife Joanne Woodward in 1968/69 in New York. Since Newman was also a passionate racing driver, the chronograph function of the watch was especially useful for him. The loving dedication „Drive Carefully Me“ was engraved on the back, the request of his wife to drive carefully.

After Newman had worn his watch enthusiastically over several decades, he gave it in 1984 to James Cox, his daughter’s boyfriend at the time.Legend has it that Cox received the Daytona as a gift because he spent the summer building a tree house on Newman’s estate in Connecticut. Cox wore it for years, the clock disappeared from the picture – but not the general interest in it. Collectors had allegedly speculated for some time that it was still Newmans family property. In 2017, it unexpectedly reappeared in New York, where it was auctioned in October at Phillips Auction House for as much as $17,752,500. This makes it the most expensive vintage wristwatch sold to date and beats all previous price records.

Also Newman’s second model, the „Big Red“ Ref. 6263 is a vintage model of the series. It was not until 1965 that Daytona models received the „Daytona“ lettering on the dial, directly above the hour totalizer. Most of the references are equipped with metal bezels, but the black bezel of the „Big Red“ gives it a masculine look and looks prominent on the wrist. Its dials come either in black with complementary white subsidiary dials or in white with black totalizers. The red „Daytona“ lettering is characteristic of all models. Newman kept his „Big Red“ after giving away the ref. 6239 and wore it for years with great esteem. She remained in family ownership and was passed to his daughter Clea, who still carries her in memory of her father. 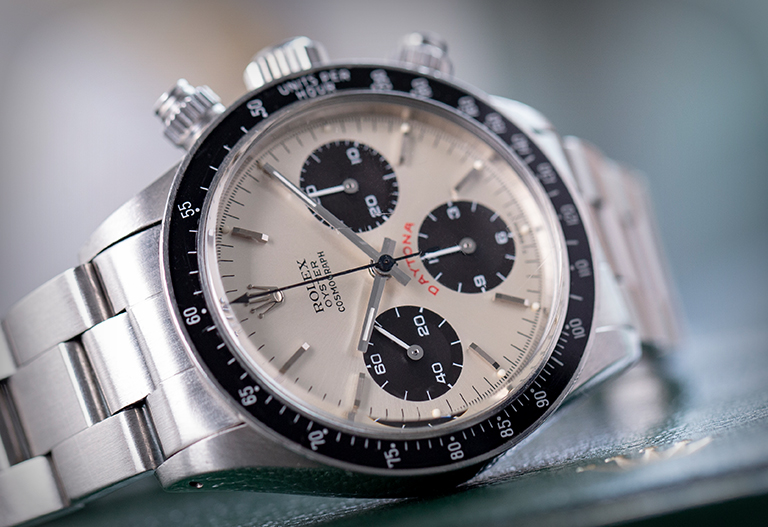 How to recognise a „Paul Newman“ Daytona?

Numerous photographs have shown that Newman has a Daytona with ref. 6239. „Paul Newman“ has seen a huge increase in price at auctions over the last 20 years. For example, in 1993 it was sold at an auction for $ 9,257, and in 2013 the same watch was auctioned for $ 75,000. The increasing popularity of the watch, however, has also led to an increasing number of counterfeits. If you want to make sure that a model is actually a „Paul Newman“ Daytona, you should pay particular attention to the dial and, of course, buy only from a trusted dealer. Only the Daytona 6239 with Exotic dial is considered the real „Newman“. The dial is the sole distinguishing feature here. Since the Exotic Dials at that time sold even worse than the normal Daytona, these exotic dials were produced in very small quantities, which makes authentic models nowadays more exclusive. Newman’s own watch had a white dial with black totalizers and a black ring. The sub-dials also differ from the standard version: the left-hand side has a 15, 30, 45, 60 divisions, whereas the standard version has a 20, 40, 60 divisions. The numbers are also kept in a bold Art Deco font.

Because the sale of the original „Paul Newman“ far exceeded the previous expectations of about 1 million dollars, the watch was probably the hottest discussed watch in 2017. Newman himself would perhaps have been very happy about this sale; part of the proceeds will be donated to the Nell Newman Foundation, which is committed to humanitarian, environmental and scientific projects. 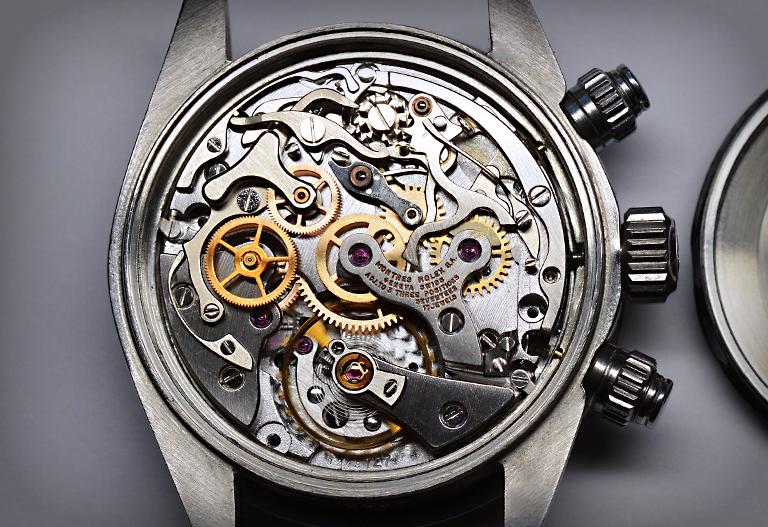 How to recognise a „Big Red“?

As part of the Daytona series, the „Big Red“ is a classic sports watch characterised by its elegance and aesthetics. Characteristics for all models of ref. 6263 is the black tachymeter bezel, which is equipped with 200 units per hour. Unlike its monochrome sisters, the contrasting dials on the „Big Red“ make it easier to read.

Only watches with the red „Daytona“ lettering on the dial can be described as a genuine „Big Red“. The word forms a curve above the sub-dial at 6 o’clock; it is essential for the characteristic look of the reference and its main distinguishing feature. The watch is wound by hand, since the self-winding mechanism was introduced in the Daytona series in the late 1980s. 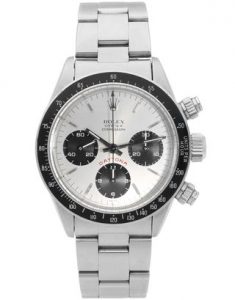