He is considered the great-grandfather of the modern wristwatch and one of the greatest inventors of his time: Abraham-Louis Breguet. Genius also seems to lie in the genes, as Louis-François-Clement Breguet, his grandson and later the managing director of "Breguet et Fils", has been honoured for his life's work as one of 72 scientists engraved on the Eiffel Tower. In this article, we would like to look back at some of the inventions made by the ingenious watchmaker from Neuchâtel. Let's have a closer look at Breguet's groundbreaking inventions.


Abraham-Louis Breguet and his inventions

Abraham-Louis Breguet was born on January 10, 1747 in Neuchâtel, Switzerland, and learned the trade of watchmaking both in his hometown and in the picturesque town of Versailles, as well as studying mathematics in Paris. He opened his first workshop at the age of 28, thus laying the foundation for his later life's work. He developed watches for such famous figures as Marie Antoinette, Czar Nicholas, Napoleon, the Duke of Orleans and the King of England George IV. In 1810, he built the world's first wristwatch for Caroline Bonaparte, Napoleon's sister. For good reason, Breguet is one of the most influential watchmakers of all time. 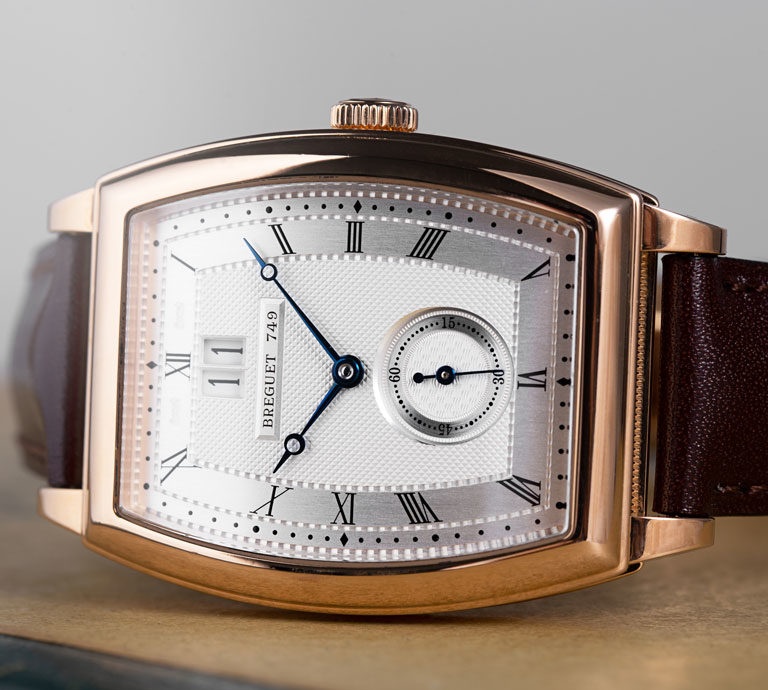 The first of many milestones in Breguet's career is undoubtedly the invention and construction of the first self-winding movement. In 1780, the then 33-year-old Breguet invented the first calibre with springs wound by an oscillating weight. The idea behind this was to create a watch that did not have to be wound by key or manually by hand.

This timepiece, later widely known as the "perpetuélle", was to be the catalyst for a global revolution. Enthusiasm for watches of this type from Breguet's workshop even reached the homes of a wide variety of royal families, thereby significantly promoting the reputation of the Manufacture Breguet. This type of winding mechanism became so popular that Breguet is said to have manufactured and sold at least 60 of these watches between 1787 and 1823. Due to a lack of records from 1780 and 1787, it is assumed that he produced another 20 to 30 watches during this period.

The development of the Breguet overcoil

Imagine how bulky wristwatches would look and how annoying it would be if the balance wheel's oscillations were made by a pendulum as in large grandfather clocks. Hard to imagine, isn't it? The Dutchman Christiaan Huygens avoided this by inventing a flat balance spring, which, due to its elasticity, enabled the balance to oscillate in a far more practical way. While this spring performed exactly as it should, it nevertheless left one or two desires unfulfilled.

Breguet improved his colleague's invention by raising the final coil of the spring and reducing the curvature. The result was an extremely efficient, concentric balance spring, which is still one of the most important components of high-precision watches from any manufacturer. The Breguet overcoil made the watch exceptionally precise and also ensured that the balance spring wore out much more slowly. To ensure that watches equipped with a Breguet overcoil functioned accurately regardless of temperature fluctuations, Breguet added a sophisticated bimetallic compensation bar. 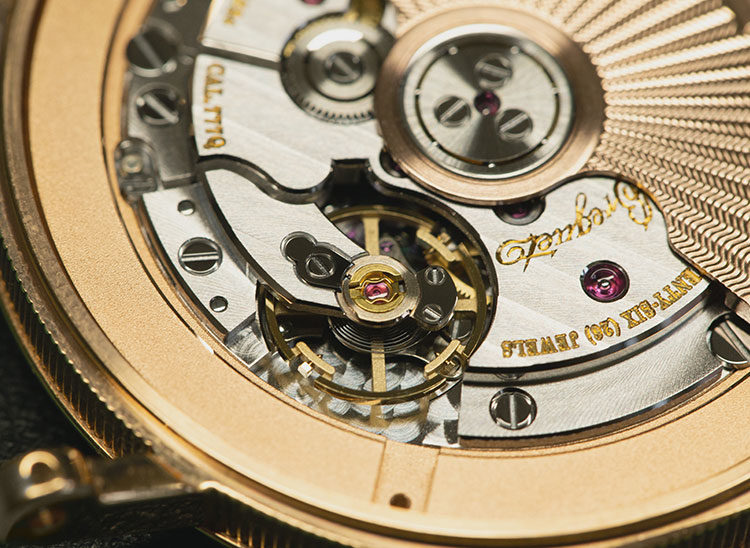 Breguet and the world’s first wristwatch

On June 8, 1810, Abraham-Louis Breguet received a unique and highly unusual commission at Place Vendôme in Paris. Caroline Murat, whose maiden name was Bonaparte and who was Queen of Naples, ordered a watch with a repeater movement on a bracelet for an unprecedented 5,000 Francs.

The ambitious watchmaker, who by then enjoyed an excellent reputation, was only too happy to take up this new challenge. Although there are few records of the exact measurements and final appearance of the watch, Breguet's manufacture registry contains detailed descriptions of each phase of its production. Today, it is assumed that the world's first wristwatch was an extremely flat watch by the standards of the time, housed in an oval case, fitted with the requested repeater movement and featured a bracelet made of hair and gold threads.

Unfortunately, historical items such as Ettore Bugatti's private car or Caroline Murat's watch with the marking "No. 2639" tend to inexplicably disappear from the face of the earth and never reappear. Whether this watch will ever be found again or will remain lost forever remains to be seen.

The tourbillon takes the watch industry by storm

Nine years before the creation of the first wristwatch, Breguet invented something that would transcend the imagination of many scientists and colleagues of the time. A small mechanical construction was to be capable of completely negating the laws of gravity. The patent for the tourbillon (meaning "whirlwind" in English) was issued under the name "Régulateur à Tourbillon" to Breguet in Paris on June 26, 1801 for a period of ten years. 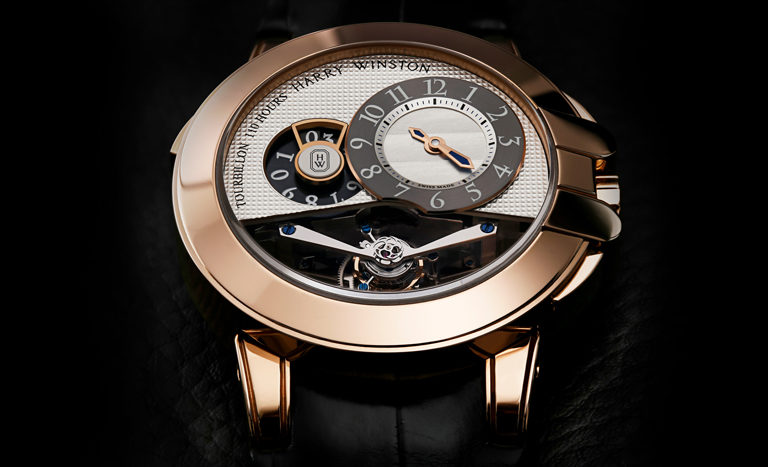 
With the tourbillon, it was possible to compensate for rate deviations caused by the position of pocket watches in use at that time. To achieve this, Breguet mounted the entire escapement of a watch in a small cage that rotated around its own axis every minute, thereby increasing the accuracy of the watch many times over, even in vertical or inclined positions – at least in theory. After all, at the time the patent application was filed, the highly complex tourbillon was far from being fully developed or even ready to be sold. Breguet gave away the first two watches with a tourbillon and it was not until four years later that the first watch with a tourbillon intended for sale would be released. These examples of Haute Horlogerie are still reserved exclusively for watchmakers to this day, because machines are incapable of performing such precise mechanical work.

While all the preceding inventions were brilliant achievements, the next invention literally adorns a crown on Breguet's watches. Seven years after Breguet's death, his son Louis Antoine sold the first watch with a keyless winding mechanism to Count Charles de L'Espine.

This innovative system is now generally regarded as the birth of the ubiquitous crown, which can be found on practically every wristwatch today. Nevertheless, this system, which was fitted on the outer edge of the case, was not only used to wind the watch manually, but also to set the time. This invention, too, has been adopted as a winding mechanism by all watchmakers worldwide after the patent expired, and the modern wristwatch can hardly be imagined without it. 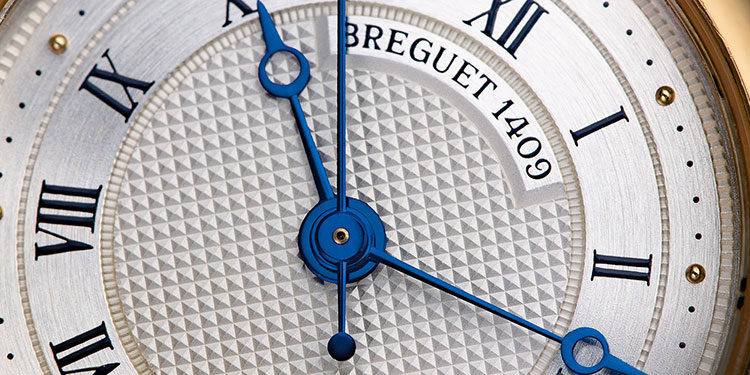 
A true genius of the watch world

But these are far from all of the inventions which came from Breguet's workshop. The following innovations can also be attributed to Breguet:

With all this in mind, we can thank Abraham-Louis Breguet in every respect, since almost every manufacturer of timepieces of any kind now makes use of Breguet's inventions. Without his unique pioneering spirit, the advent of the wristwatch would have undoubtedly been completely different.