Historically, IWC produced its first diving watch for the British Navy already in 1945. The code name of the contract was „W.W.W.“: watch, wrist, waterproof. From today’s point of view, the watch was more „water-resistant“ than waterproof, with an estimated diving depth of 10 metres. Nevertheless, IWC already showed a spirit of innovation and stood out by experimenting with a pressurized bottom equipped with a lead gasket.

The Aquatimer and the Decade of Diving

When someone speaks of diver’s watches and IWC, this one naturally refers above all to the Aquatimer, which was launched a good two decades later in 1967. In the same year Rolex introduced its first Sea-Dweller, which officially made 1967 an important year in the history of diving watches. In general, the world began to get more and more enthusiastic about the depths of the oceans in the 1960s. Filmmakers like Jacques Cousteau and Hans Hass succeeded in documenting the underwater world on camera and projecting them onto the screens around the world. As a consequence, this enthusiasm naturally asked for new technology and IWC began to develop one of its most legendary diving watches: The 812 AD and 816 AD.

The first Aquatimer reference was the „812 AD“, which was renamed „1812“ in 1971 when IWC made a four-digit reference system its standard. It had a water resistance to a depth of 200 m. The 812 AD had a rotating inner bezel and two crowns with the legendary engraved fish, with one of the crowns controlling the bezel. In 1969 a second model was introduced with the Ref. 816 AD (from 1974 also known as „1816“). This model got a soft optical update and could reach a depth of 300 m thanks to its cushion-shaped housing. In contrast to the early Submariner, the Aquatimer also had a date function. 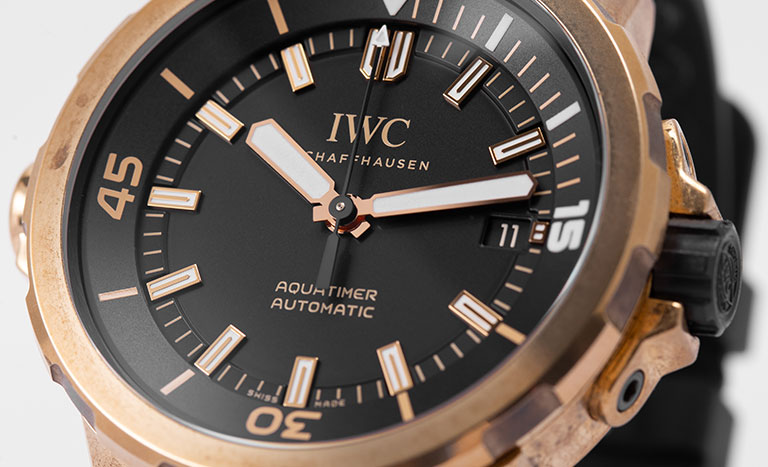 The hidden star of the Aquatimer: the bracelet of Gay Frères

Both, the „812 AD“ and „816 AD“ have an elegant, matt black dial with gold lettering, which has a clear structure and can therefore be easily read even in poor water conditions. Tritium, which was still common at that time, was used as a luminous material. At 37 mm, the 812 AD and 816 AD are rather narrow, which is also the charm of these vintage models. The floor is no pressure floor any more, but firmly screwed with the usual submarine engraving used for these models. Inside the 812 AD beats the automatic calibre 8541 produced by IWC with 23 jewels, a power reserve of 44 h and 19800 A/h. The 812 AD is equipped with the IWC’s own automatic calibre 8541. The movement is particularly known for its patented Pellaton winding mechanism. The 816 AD is powered by the calibre 8541B, which contains 25 jewels. Other specifications remain the same.

The other star of the early Aquatimer models is the bracelet. It came in several variations, including a „Tropic Strap“ leather strap, but especially the „Beads of Rice“ bracelet by Gay Frères is even today a real eye-catcher. Founded in 1830 and family-run ever since, Gay Frères manufactured many of the most legendary bracelet designs. Rolex‘ Oyster bracelet, for example, was designed by Gay Fréres. The iconic ladder bracelet by Zenith? Another creation from the house of GF. One of Gay Frères‘ bestsellers, which you can also find on selected Aquatimer models, is the so-called „Beads of Rice“ bracelet. With its narrow, hypnotically intertwining links and fixed attachments, the design is still recognizable today for anyone who loves vintage watches.