Agent James Bond 007 and his watches

James Bond and his watches

But all in an order: It all started with a man named Ian Fleming. The writer and creator of the world’s most famous secret agent was passionately wearing his Rolex Explorer, laying the foundation for the close link between 007 and the watch world. 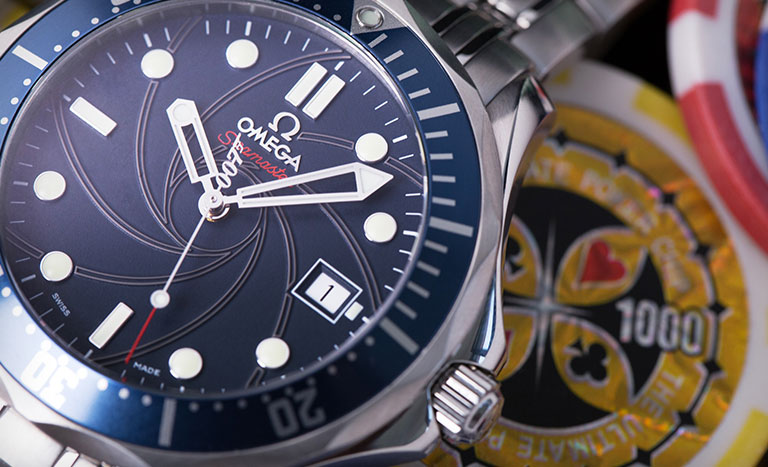 
In issue 11 „On Her Majesty’s Secret Service“, Fleming describes in great detail a „heavy Rolex Oyster Perpetual with a metal bracelet“, which the young Bond sees in front of him in the middle of the night.

In the following films, James stays with the brand. In 1962, the first big screen movie with the women-loving action hero „Dr. No“ was released. He is embodied by Sean Connery, who wears a Rolex Submariner. Also in the following films from 1963 and 1964 „From Russia with Love“ and „Goldfinger“ . By the way, not only Bond, but also the Bondgirl Pussy Galore appears with a Rolex in the latter: As personal pilot of villain Goldfinger she wears a Rolex GMT Master with the famous Pepsi-bezel (Ref. 6542).

In 1965, another appearance in „Thunderball“ takes place – Bond’s watch, let’s call it “special”. For the first time quartermaster Q enters the game, the special self-built watch based on a Breitling offers an integrated contamination meter.

In the 1967 movie „You Only Live Twice“, Sean Connery probably wears a watch from his private collection, but it plays no crucial role in the plot of the movie.

In 1969, to everyone’s astonishment: Sean Connery is replaced in „On Her Majesty’s Secret Service“ by the Australian George Lazenby. Now the actor is again wearing Rolex, a Submariner and a Rolex Chronograph.

The Bond from Down Under acts only once in the role of the secret agent. Once again in 1971, the public’s favourite, Sean Connery acts as Bond in „Diamonds Are Forever“. Once again he wears his private watch during the film. It can only be seen once in the film – but is unfortunately not clearly identified.

In the 1973 movie „Live and Let Die“, Q builds a truly ingenious gadget into the hero’s timepiece: not only a magnet for deflecting bullets, but also a circular saw was built-in. Fortunately for Bond, he can successfully break away from its shackles and once again free himself from dangerous situations. As in the previous film, the actual watch is not clearly identifiable – in the credits, however, the company Rolex appeared. The assumption is therefore obvious that it is a Swiss Made model.

In the following films „The Spy Who Loved Me“, „Moonraker“, „For Your Eyes Only“, „Octopussy“ and „A View to a Kill“, MI6’s secret agent wears various watches from different manufacturers such as Rolex and Seiko. But they all went through Q’s hands before, technical gadgets are naturally preprogrammed and still inspire young and old today.

In 1987, the double-zero agent was spotted for the first and only time with a TAG Heuer in “The Living Daylights”. Actor Timothy Dalton, on the other hand, plays the role of James Bond again in 1989, but once again wears the well tested Rolex Submariner. 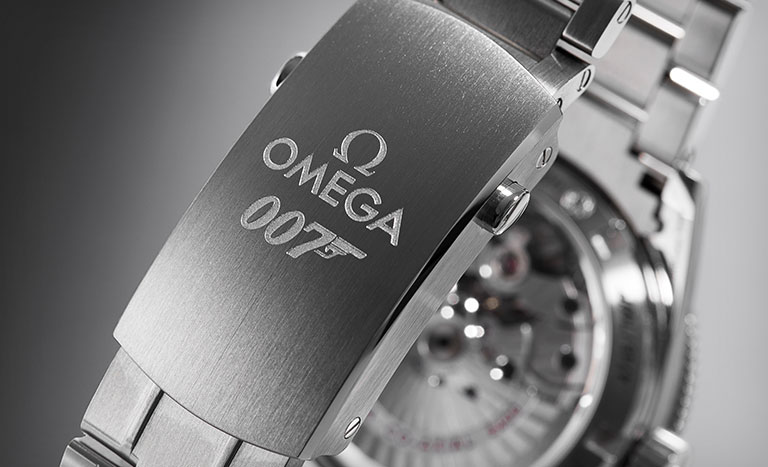 In 1995, fans were queuing up at the cinemas. The next film, „GoldenEye“ is eagerly awaited, with Pierce Brosnan in the role of James Bond it is a huge success.

In the forefront , Oscar-winning costume designer Lindy Hemming chose the new watch for the secret agent. „I thought Commander Bond, a sailor, a diver, and a discreet gentleman, was supposed to be wearing the Seamaster with a blue dial,“ those were her words. Thus, she contributed significantly to a new Bond era, henceforth 007 wears in every movie Omega.

Revalued by Inventor Q, the watch made use of a build-in laser and let’s Bond escape from an armoured train. The Omega Seamaster Diver (Ref. 2541.80.00) also includes a remote detonator for bombs in the movie.

Thanks to the integrated detonator, the chronometer version of the Omega Seamaster saves the womaniser’s life in „Tomorrow Never Dies“ (1997).

He wears the same watch in the following two films „The World Is Not Enough“ (1999) and „Die Another Day“ (2002), but with different features: typical for a Q invention it usually don’t make its return to the central London headquarter, cautiously expressed.

Buried deep in an avalanche, the hero in „The World Is Not Enough“ is very fortunate that the great Q has placed a winch into the Omega Seamaster Professional. At the push of a button, the crown transforms into a grappling hook and swings in the direction of the snow cover. Having found a hold, the bezel now turns backwards, the wire rope winds up and pulls the agent out of his predicament.

The laser in the crown has its second appearance in „Die Another Day“, and thanks to the clever inventor, the watch has a remote detonator instead of the helium valve.

Exactly such gadgets exert an incredible fascination on the audience, the sometimes ingenious, sometimes absurd ideas are in the movies like the obligatory Bond Girl. 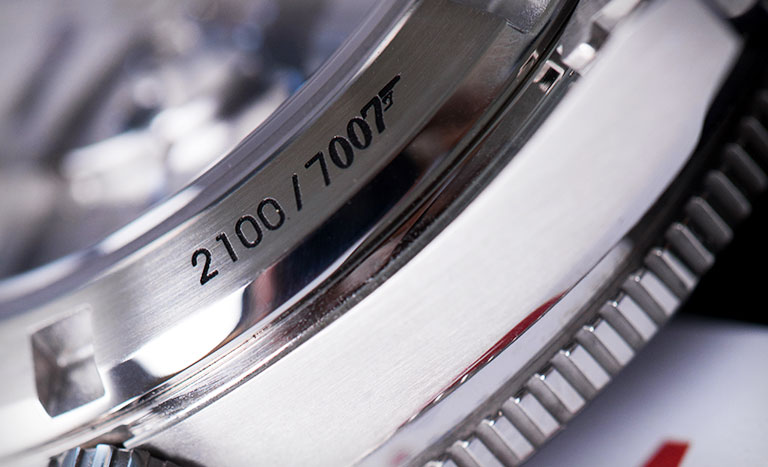 A notable change brings the new Bond alias Daniel Craig in „Casino Royale“ (2006). We are presented with a much tougher, uncompromising killer, it almost seems impossible to get through to his heart – but Vesper Lynd teaches him better. A film full of premieres, two new watches next to a new actor. The first quarter of the blockbuster features an Omega Planet Ocean 600M (Ref 2900.50.91), but it has to make way for the rest of the movie for the Omega Seamaster Diver 300M (Ref. 2220.80.00). Both timepieces come with coaxial escapement and helium outlet valve and, like the main actor, make an excellent figure.

Just in time for the film launch, Omega insisted on launching a limited edition of the two timepieces. At the end of the second hand, both models feature the 007 logo, as well as on the caseback and clasp.

With the next movie „Quantum of Solace“, for the first time since „GoldenEye“ the blue Seamaster is absent. The black Omega Seamaster Planet Ocean was deliberately set here, with the colour scheme symbolising the mourning for Vesper. In the film, Agent Bond seeks revenge for his loss and meets Dominic Greene in his private fortress in the middle of the desert.

Once again, Omega is launching a limited edition model: the Omega Seamaster Diver 300M James Bond 007 Collector’s Piece. The 41mm coaxial escapement timepiece also shows the 007 logo at the end of the second hand, and the movie’s title is on the black dial.

For the 50th anniversary of the James Bond films in 2012, Omega is presenting a special edition of the Seamaster, based on 11,007 pieces of limited edition Omega Classic Seamaster Professional Co-Axial 300M. The model also measures 41 mm in diameter, powered by the COSC-certified automatic caliber 2507. In addition to the well-known logo of the secret agent on the dial. The case back of the watch is a real eye-catcher. Through a circular recess, the rotor is visible. The rotor shares significant similarities, together with the embossed bottom, with the famous pistol barrel from the intro of the movie. Admittedly a real masterpiece. 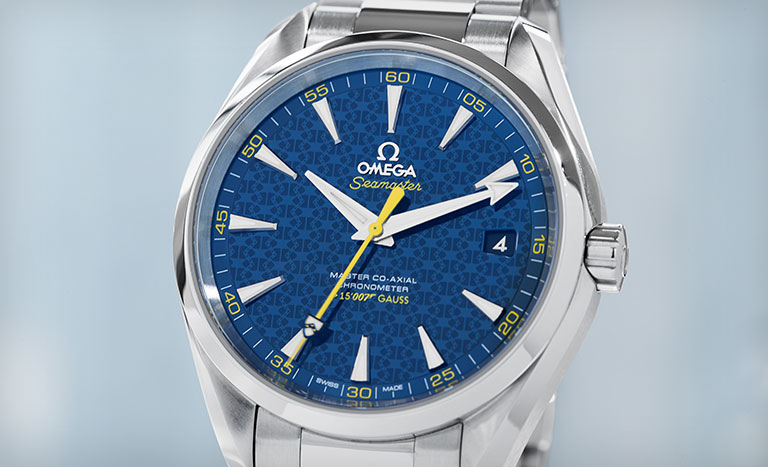 Also for this film Omega provided a limited edition model of the Planet Ocean. Instead of the stick index at seven o’clock, there emblazoned the 007 logo, as well as on the stainless steel clasp of the bracelet. The model is powered by caliber 8507 – of course COSC certified. In addition, the sapphire crystal caseback provides a great view on the rotor. It is engraved with the title of the film.

By the way, the Planet Ocean from the movie was then auctioned for just under € 195,000. The price is justified by the materials used for the timepiece – made entirely of titanium, it is a unique watch, Omega offers the model only in stainless steel.

Also in the most recent Bond movie „Specter“ (2015), the ex-naval commander chooses, again, a Seamaster. Although “choose” may not be the right word – at least two of the brand’s watches can be seen in the film. The Omega Seamaster 300 Specter Limited Edition with the rare steel lollipop second hand and NATO strap (Ref. 233.32.41.21.01.001). The design of this watch with the eye-catching hands and dial is a tribute to the first Omega Seamaster 300 from 1957. Bond also wears the Omega Seamaster Aqua Terra 150M (Ref. 231.10.42.21.03.003). An impressive timepiece, which reminds at the same time of the maritime heritage of the Commander with its blue dial.

The Specter Limited Edition, on the other hand, is also a symbolic birthday anniversary gift: James Bond Omega watches have been on the market for 20 years now. Limited to 7,007 this piece stands out especially with the textile bracelet. Last time, Sean Connery wore a three-tone nylon bracelet in „Goldfinger“ with a Rolex Big Crown attached to it. 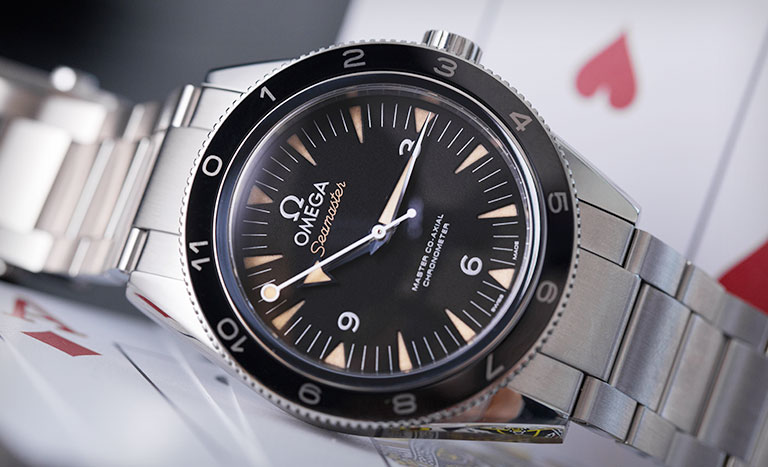 What will the future bring?

We’re now waiting for the 25th Bond movie, but Omega is not standing still: in 2017, the company unveiled the Omega Seamaster Diver 300 M ‚Commander’s Watch‘ limited edition. Based on Bond’s time before joining MI6 at the Royal Navy, the timepiece with its white, blue and white accents picks up the flag colours of the British Navy. While the watch will not be featured in any Bond movie, it still reflects its cosmopolitan and statesmanlike nature. Inside works the certified manufacture caliber 2507.

A man like James Bond, cool and relaxed in every situation, polarising and as a true woman magnet he needs the right watch. After many years with different models from several well-known manufacturers, the spy seemed to have found the right watch. Omega it should be – since „GoldenEye” he is accompanied by the Seamaster. A perfect symbiosis, both 007 and its Omegas are prized for their sense of fashion, adventure and reliability. They complement each other perfectly, and in the future we can gladly expect Omega timepieces on the hero’s wrist.