Luminous watches: The history of the luminous material

Darkness has become a relative expression. We even speak of the heavy light pollution in our environment.

But in the last century reality was different and we needed clocks that could show us the time even under difficult light or visibility conditions. Since the early twentieth century, the advantages and disadvantages of various chemical methods have shaped the way in which luminous materials can be applied to watches. 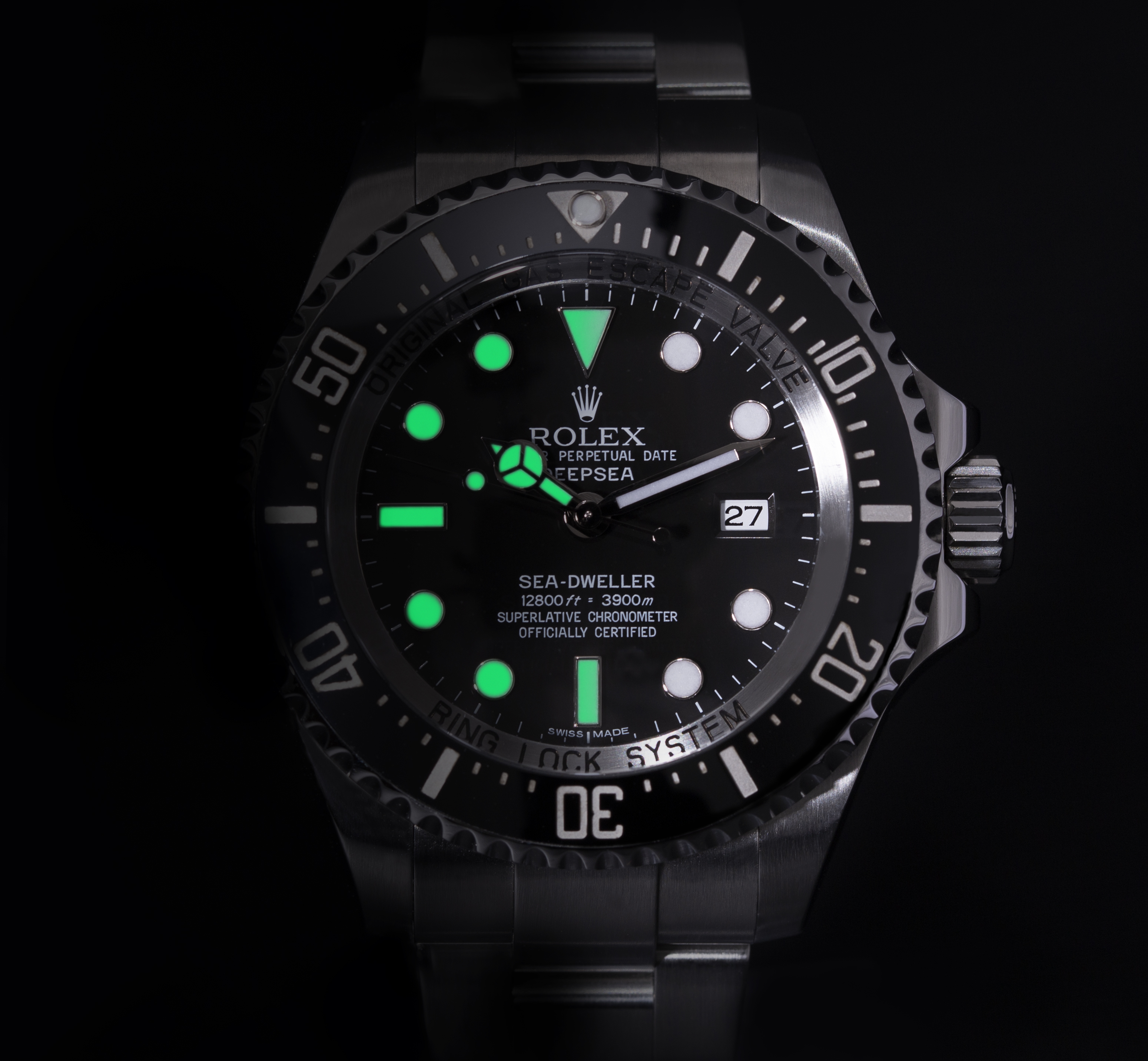 At the beginning of this evolution was the discovery of radioactivity by Marie and Pierre Curie and the observation that metal salts (purified uranium) have a much lower radioactivity than uranium ore.

In 1898 radium was discovered and it was already known that it had self-luminous properties. Guido Panerai, an Italian pioneer in the field of optics and watches, was the first to patent a phosphor called „Radiomir“ in 1914. The energy produced by the radioactive decay of radium bromide was stimulated by zinc sulphide, thus making the fluorescent substance glow permanently. Since radium has a half-life of 1,622 years, this means a relatively eternal luminous effect that requires no „charging“.

After World War I had already helped the wristwatch to gain acceptance, it also ensured a high demand for light-independent watches that could be used for the more precise processes of the modern war. This invention was a great success for Panerai. Therefore, a watch series was named after the fluorescent substance. Even today you can buy a Panerai Radiomir. But without radium. 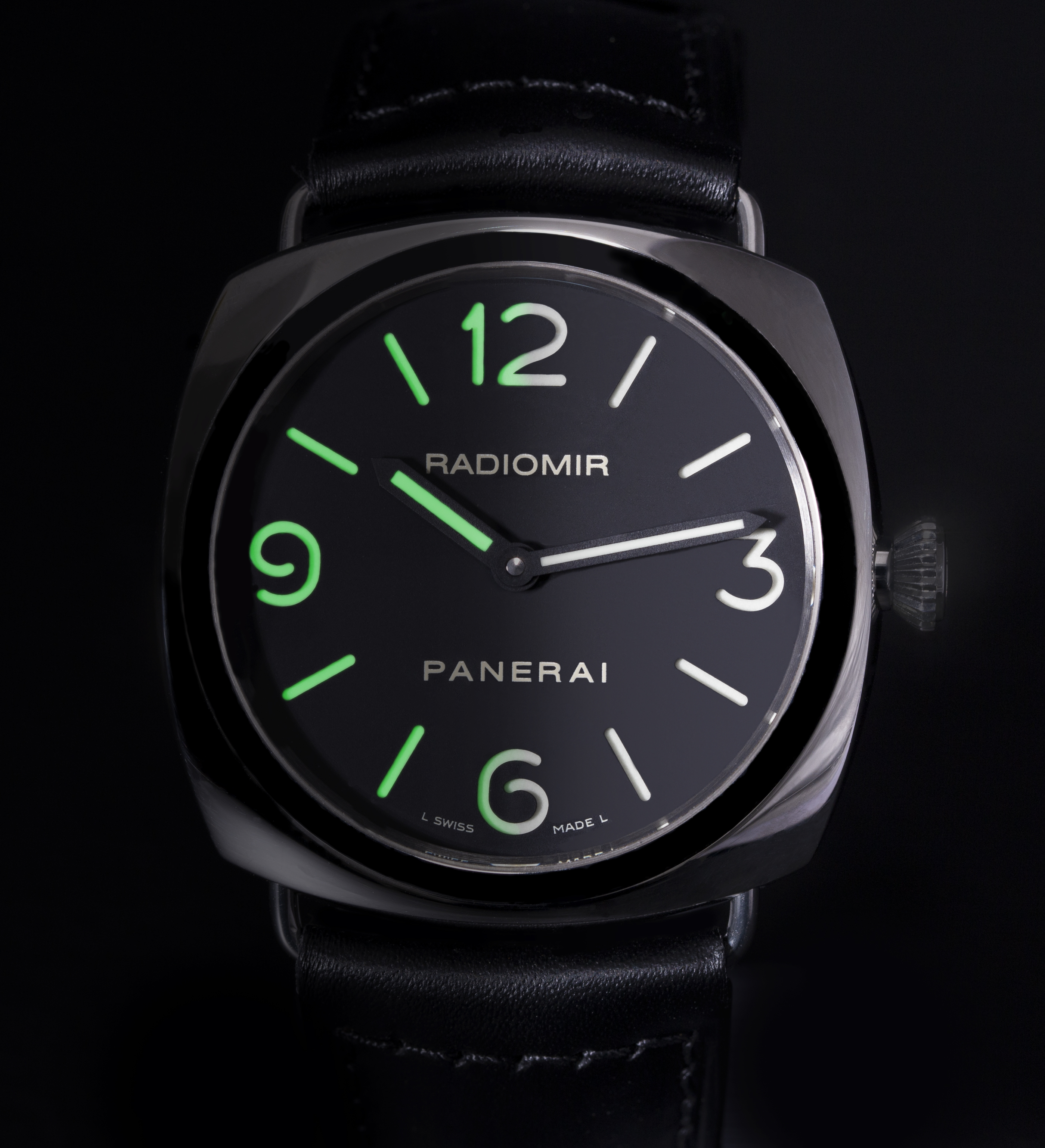 The watches were relatively safe for their wearers, since the radiation emitted by radium in the air is only a few centimetres and is already intercepted by the watch case itself.

However, this did not apply to the workers in the workshops who worked on the open watch and in particular came into contact with the luminous material.

The Radium Girls gained sad fame in this respect. They were workers who consumed large amounts of radium by moistening their brushes and applying the luminous substance to the hands and numerals. This procedure caused cancer in their jaw and throat. For a long time, people were unaware of the harmfulness of radioactive rays, so radium was initially also used for cosmetic and medical purposes.

Therefore, a new substance was used from the sixties – the hydrogen isotope tritium.

Although tritium also has radioactive beta emitters, they are much smaller than those of radium. Until the nineties, tritium was the substitute for radium-containing luminous masses. However, even there were still critical voices, as radioactive radiation continued to exist. A further development was the GTLS Tritium H3, glass tubes filled with tritium gas, which further reduced the permeability of tritium. A real paradigm shift was the development of Luminova and Superluminova by a Japanese-Swiss joint venture between Nemoto&Co. Ltd. and RC Tritec Ltd.

In this process, the electrons in the relevant pigments are raised to a higher energy level through contact with artificial light or daylight.

The more complete the excitation, the brighter the subsequent glow.

In contrast to tritium, which has a half-life of roughly 16 years, this effect is permanent with the Luminova or SuperLuminova coating and only wears off insignificantly. However, since this is a charging and discharging process, the luminosity decreases over time and has to be recharged by light.

In the end, the use of such photoluminescences also prevailed because of the strict regulations on the use and disposal of radioactive material for cost and safety reasons.  In the nineties, the use of tritium in watchmaking stopped completely. 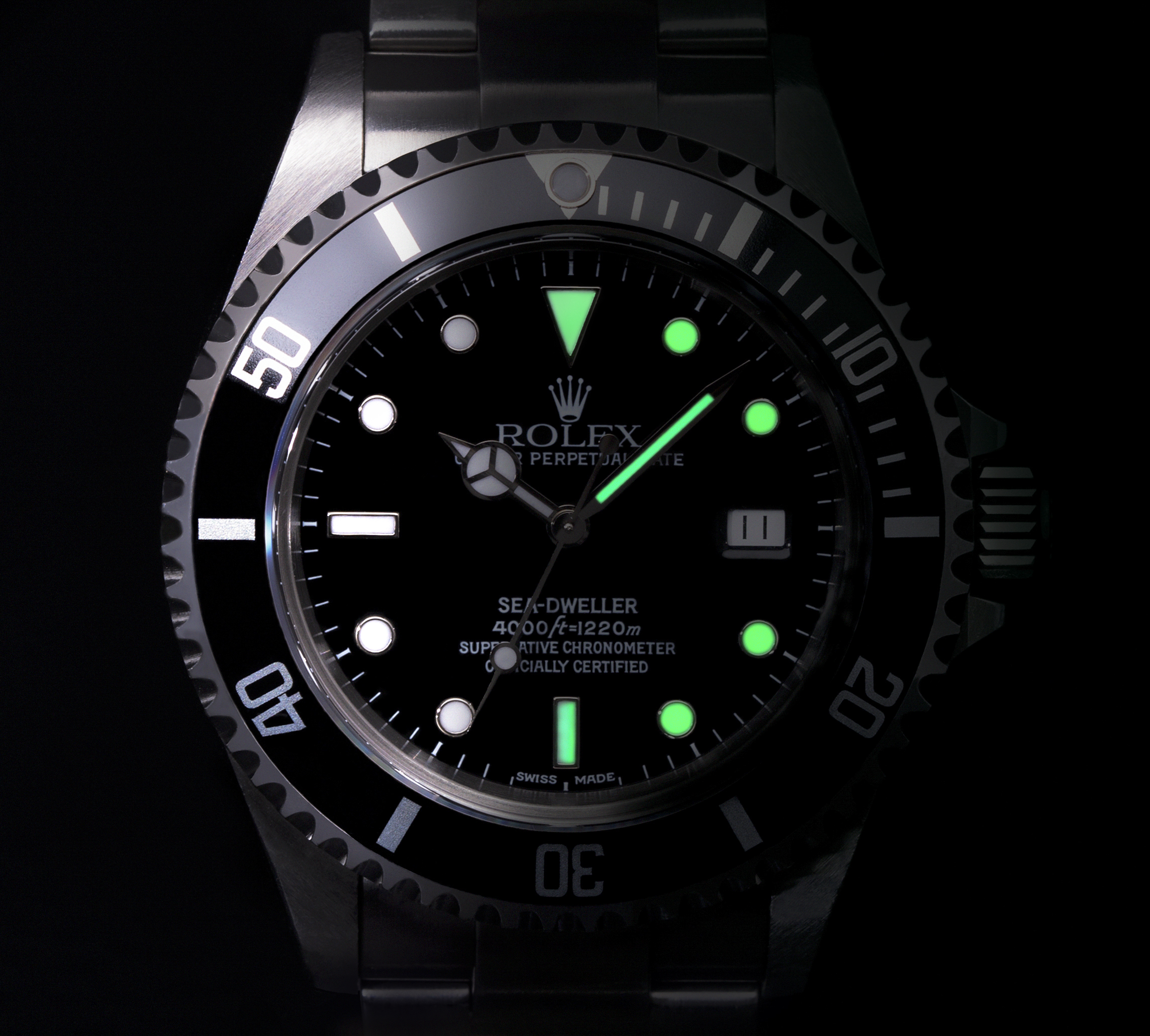 Even though the development and advancement of Luminova found a way to use harmless luminous materials in watches, the discussions about advantages and disadvantages compared to tritium watches still remain.

The rapidly diminishing brightness of Luminova coatings is a major criticism for many watch enthusiasts, in addition to the material’s susceptibility to moisture. In addition, there are still no measured values as to whether the pigments of the coating change over time.

In contrast, tritium has a long half-life, which ensures a consistently high level of continuous light over this time.

This is one of the reasons why tritium luminous materials are versatile and still preferred by the military, security services or for outdoor activities.

As with the vintage Rolex dials, where radium often bled out and left prominent dots on the dial, watches from the „tritium era“ also had a special look. The application of patina and the colour change of the indices were established here as an ideal of beauty. This look is still appreciated by collectors nowadays.

With the decision of the major watch manufacturers to no longer manufacture tritium watches, models from this period also acquire a rarity value.