Luxury watches and their nicknames

There are people and things in our lives that we really like or even love. Often, we then give them nicknames or pet names to express that the relationship between us and these people deserves special intimacy and appreciation. The examples of how partners call each other are often as bizarre as they are diverse. Outsiders rarely understand it. But that does not matter for the initiates as they fulfil their purpose and underline the loving affection. Similarly in the watch scene with the luxury timepieces: watch enthusiasts often talk of a Coke or Panda on a wrist, and we hear of Batman and Hulk but not in the superhero sense. And what does a fried egg have to do outside the kitchen? We would like to bring you on board and clarify which watches hide behind these odd nicknames.

First and foremost are the model variants from Rolex. We say variants because there are also several different coloured bezels and dials within a series, from which the following nicknames can be derived.

The Rolex Submariner (Ref. 116610LV) is affectionately called "Kermit". As can be seen from the LV (French for Lunette verte) in the reference number, the bezel of the watch is green. The dial comes in rich black, reminiscent of the happy frog of the Muppets. Speaking of the green bezel, the successor of the Kermit is the Rolex Submariner (Ref 116610LV) and it also has a nickname. It was baptised by the Rolex community with the name "Hulk". With this model, the dial is green, making the whole watch seem green and is thus definitely an eye-catcher. These are qualities that no one better represents than the furious giant from the Marvel comics, who is admittedly unmistakable. 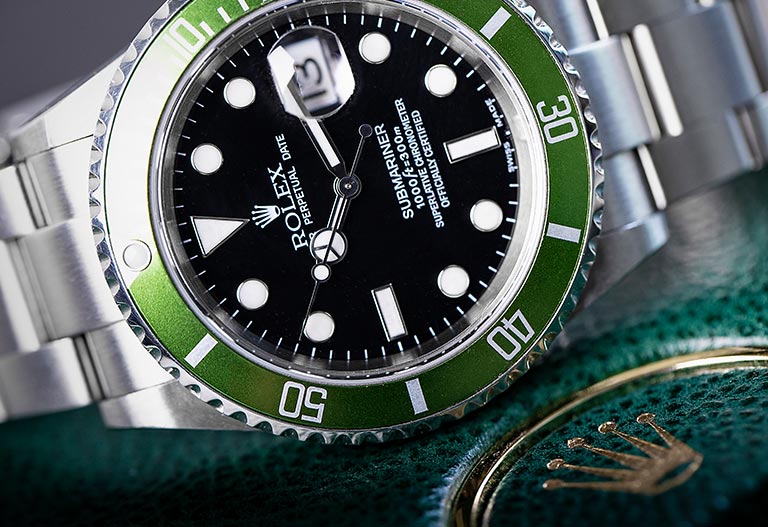 Staying with super heroes, Gotham City greets us with the "Batman" aka Rolex GMT Master II (Ref. 116710BLNR). With a two-tone, blue-black bezel and a black dial, the nickname is not far-fetched. Because Batman works only at night, the colours blue and black reflect this in the best possible way.

Back to the comic heroes – we are missing our blue all time favourites: the Smurfs. The Rolex Submariner Date (Ref.116619LB) is also called "Smurf" thanks to the colour of the dial.

In 1983, the Rolex GMT Master II (Ref.16760) was introduced. It was the first GMT with sapphire crystal and also the new caliber 3085. The movement was larger than previously, with a height of 6.3 mm this contributed significantly to the nickname of the model: "Fat Lady". Due to a larger movement and the curved glass, the case of the model was not clunky, but noticeably thicker. However, the "Fat Lady" was only built for six years, and in 1989 Rolex replaced it with the newer Coke model. It also remains the only model with a deep dark red on the bezel, the following GMTs all have a bright red colour. Nevertheless, the short production phase and the blood-red inlay of the bezel make it as desired today.

But enough of childhood heroes, we devote ourselves to a serious topic. Better an ice cold coke or maybe Pepsi? In this question, humanity divides into two camps, each has its own favourite. Both are brown, caffeine and sugary sodas, both have the American background and are known globally. And yet we clearly differentiate: one is better than the other. Rolex has taken up this dispute and presents us with the Rolex GMT Master II (Ref. 16710), the so-called "Coke". Striking is the two-tone, black and red bezel. Unlike the subsequently released "Pepsi", the Rolex GMT Master II (Ref. 126710BLRO) with its blue-red bezel strongly reminds of the refreshing drink with the colour combination of it’s logo. If one considers now that both luxury watches are based on the same model, similarities can be found in terms of parallels to the drinks.

The Rolex GMT Master II (Ref. 126711CHNR) also deals with the subject of lemonades. Thanks to its bezel with black and brown color and many details in Rolex’s own alloy Rolesor Everose, the watch earned the nickname "Root Beer". This is a non-alcoholic soft drink widely drank in the US and Canada.

It almost seems like all Rolex GMT Masters have a nickname. And there’s one more, the GMT Master Ref. 16713  based on one of the album covers and the song of the band "Survivor", it carries the nickname "Eye of the Tiger". A very apt description, the bezel and the dial set in brown clearly from the golden applications such as the crown, 24-hour scale on the bezel or Jubilee bracelet. Especially in the dark, the eye of the tiger comes into validity: hands and indices glow in light green, the reflections of golden elements make the illusion perfectly accurate.

An absolute classic with incredible history is the Omega Speedmaster Moonwatch. It was the first and so far only watch on the moon and was therefore quickly given the nickname „Moonwatch“. It was not long and the name was program, today it officially bears the original nickname in the model name. 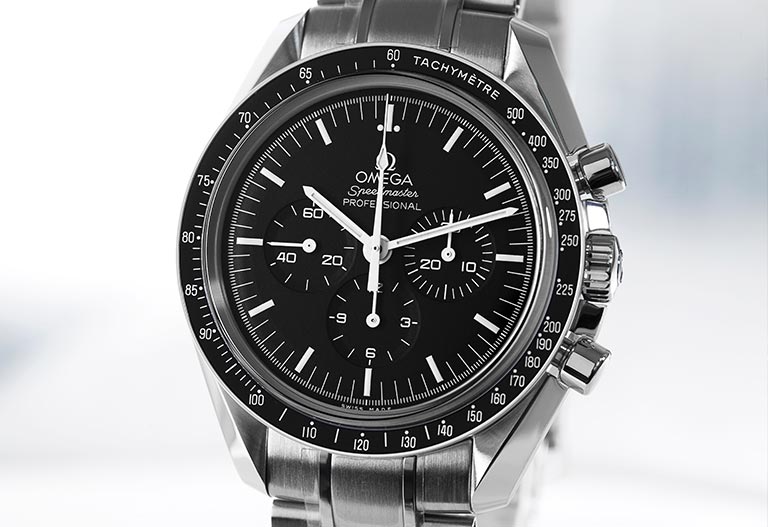 The Omega Speedmaster Moonwatch Chronograph is also very popular. Before the Speedmaster flew to the moon in 1969, it was regularly seen on the wrist of people driving high performance race cars. From an abbreviation of the name and in reference to the motorsport it was soon baptized "Speedy" and so it is still called today.

Breitling – From the sky to the pan

The Breitling Navitimer undoubtedly belongs to the most popular and therefore most famous watches of the Breitling family. The pilots watch has long been a bestseller among pilots and quickly built up a huge fanbase. Their characteristics are the bezel with an integrated slide rule, making it possible to perform extensive calculations. Before there was any on-board computer in every cockpit, that was a not to be an underestimated advantage. The result is a case size that literally owns it: 48 mm diameter, with all important functions built in. 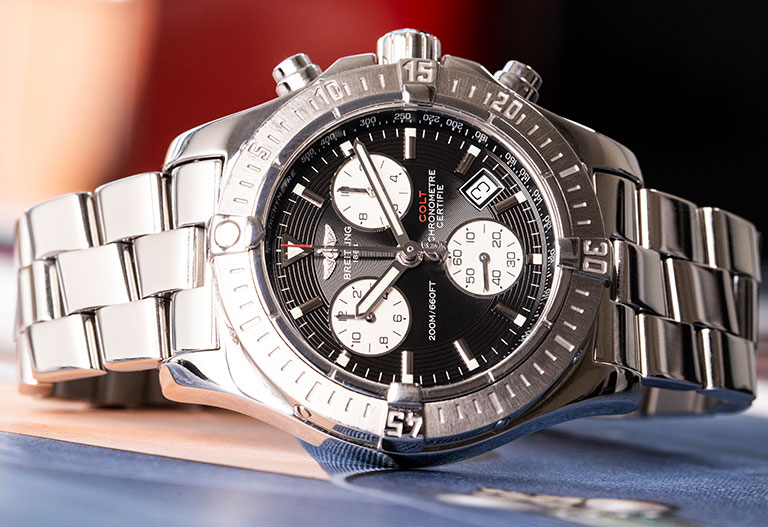 One model, the Breitling Navitimer (Ref. 816), received a name from lovers that will make you think twice. In expert circles one speaks of the "fried egg", but why? First, the bright orange second hand and the size of the watch catches the eye, but the association with a sizzling egg in the pan still seems a little outlandish. However, if you look at the timepiece in profile, you can clearly see the curvature of the glass. Now the naming becomes more comprehensible, the domed glass with the colour of the second hand, plus the large diameter. This actually reminds of the yellow yolk in the middle of a fried egg.

What’s up with the panda?

Pandas, with the exception of a few in China, are only found in zoos around the world. This statement is true with regard to live animals, but in the watch scene we also speak of the panda – on the wrist. Of course, none of the mammals had to give up their lives, but the so-called Panda Dial is all about the look. This refers to chronographs with a white and black colour scheme on dial and totalisers. Basically, one speaks only of the Panda, if the dials stand out clearly from each other, in a black-grey watch, for example, this would not be the case. 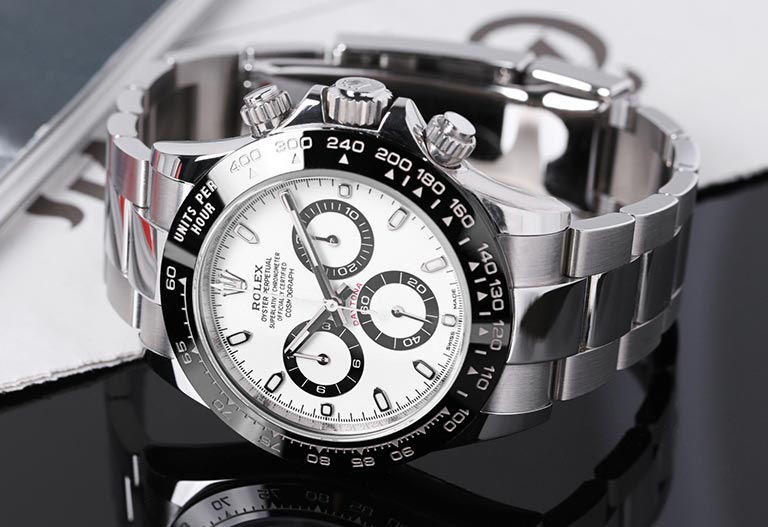 One differentiates in the following constellations: 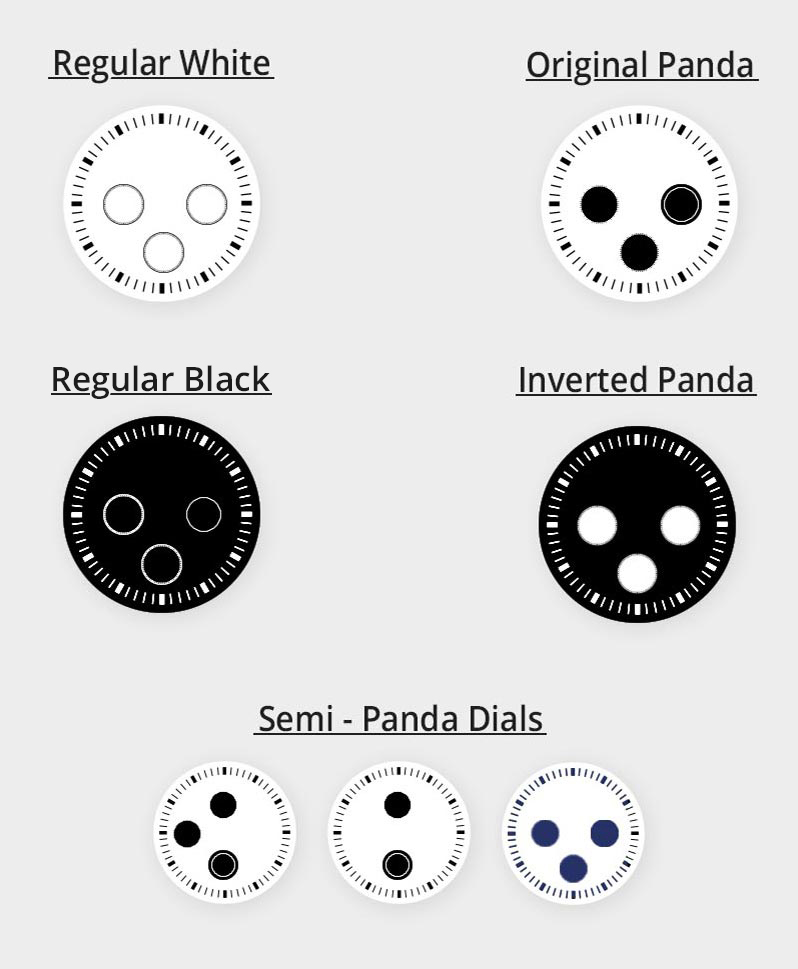 The relevant name behind Seiko

With the Seiko (Ref 6138-0040), the company launched a massive timepiece. The watch measures approximately 43.55 by 46.14 mm in width by length, plus a case thickness of approximately 16.2 mm. The bulky case reveals a lot of polished stainless steel,  and the glass is curved. The position of the buttons and the crown of the powerful chronograph at twelve o’clock almost influenced the nickname The Seiko timepiece of this particular form and size is called „Bullhead“.

Looking for a new darling?

We are happy to play the Date Doctor – for your wrist. Most of the watches listed can be found on Watchmaster’s Onlineshop. Our shop offers certified, used luxury watches with changing daily offers, so being fast can be really worthwhile. To give this opportunity to anyone interested, we offer an easy payment by credit card, PayPal or bank transfer and favourable financing options. Select your desired model and put together in the payment process your very own instalment plan. You can specify your preferred down payment amount and the length of the instalment period.