The beat inside: The most important Rolex calibres

When you think of Rolex, the calibres of the Swiss watch manufacturer are probably not the first thing that comes to mind. While the design, name and history of Rolex models promise luxury and prestige, calibres are often reduced to their functionality. First and foremost, a calibre should work smoothly. But hardly any other brand has understood how to combine functionality with a spirit of innovation like Rolex. With over 100 calibre variations in its repertoire, Rolex has initiated some of the most important innovations in the watch industry, all of which are now standard and serve as the basis for the movements of other brands.


Indicators for the quality of calibres

One of the characteristics by which the precision of a calibre can be measured is its frequency. Generally speaking, the higher the frequency, the more precise the watch will be. The range stretches from the beginnings in the 1950s, which only had a frequency of 18,000 beats per hour (BPH), to the newer models of the Submariner and GMT-Master II, which all have a frequency of 28,800 BPH. In addition to precision, the power reserve is also a decisive indicator for the quality of calibres. This is the time the watch runs after winding before it has to be wound again. The latest calibres from Rolex are able to boast up to 70 hours of power reserve. 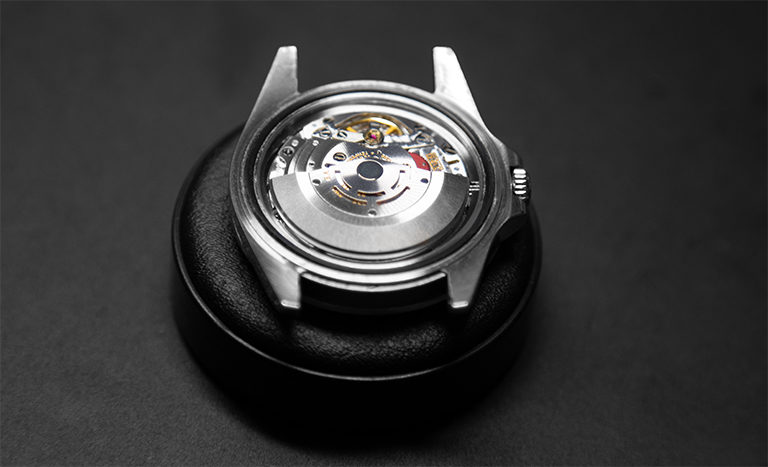 
The beginnings of the Rolex calibres

The most important of these innovations took place in 1930, when Rolex introduced the Caliber 620, the first automatic rotor that could wind the movement in both directions. Whereas previously, you had to wind your watch manually, this was done by the constant movement of the wrist in an automatic movement. Therefore Rolex called the rotor "perpetual". The calibre was used in the Rolex Bubble Back.

At that time, it was still common for brands to buy movements from producers like Zenith, ETA or Valjoux and modify them according to their own needs. Rolex, however, began making its own movements early on. The 10xx-series would serve as a blueprint for later calibres. The Caliber 1030, which debuted in 1950, was mainly known for its functionality and reliability. The calibre is used in the Rolex Oyster Perpetual, the Submariner, as for example in the Ref. 6536, and in the Rolex Explorer. 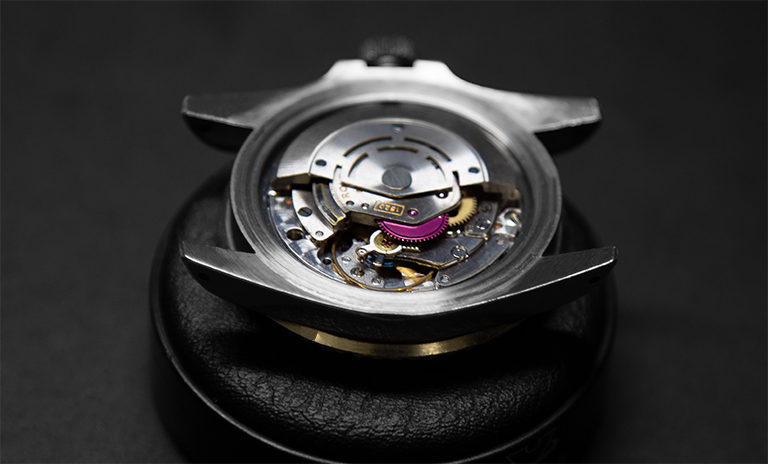 If a Rolex watch ticks once every second, it is either a Rolex with quartz movement like the Oysterquartz Datejust, a fake or the Rolex Tru-Beat. A true exotic among Rolex watches, the Tru-Beat debuted in 1954 with the Caliber 1040, which ticked five times per second at 18,000 vibrations per hour. For this reason, a complex escapement was developed that reduced the five beats to just one beat. Rolex marketed the watch specifically for doctors and nurses, who could use it to more easily measure the pulse of patients.

After producing the reliable calibres in the 10xx series for its bestsellers, Rolex began to pursue new challenges, such as a GMT calibre for GMT watches that allowed you to see two time zones at once. It all began in 1954 with the GMT-Master (Ref. 6542), which Pussy Galore also sported on her wrist in the James Bond movie "Goldfinger". This reference contained the Caliber 1036, where the GMT hand was still connected to the hour hand. The wearer set the time zone by moving the bezel. In 1959, the Ref. 6542 was replaced by the GMT-Master (Ref. 1675), in which the Caliber 1565 was used. In this model, the wearer was able to set the GMT hands independently of the hour hand.


Classic calibres and innovations by Rolex

After Rolex made its breakthrough for automatic movements with the Caliber 620, movements with manual winding became more and more uncommon. The 12xx series still featured hand-wound models of the Rolex Oyster Perpetual and Rolex Oysterdate Precision, but the only series that maintained hand-wound movements over the years was Rolex's classic dress watch: the Rolex Cellini. This was introduced in 1964 with the Caliber 1600 and was equipped with the more recent Caliber 1602 in 1993.

Rolex enthusiasts have a particular affinity for movements that are defined by their resilience and precision. In 1965, Rolex developed the Caliber 1575 because a reliable, low-maintenance automatic movement was necessary. Rolex simultaneously introduced a number of other innovations that are still used in its timepieces today. For example, shock protection for the escapement wheel was integrated. The Caliber 1575 also introduced the immediate date change at midnight. The calibre became famous in the Rolex Datejust series. Furthermore, it was also used in the Explorer II, the Sea-Dweller and the Rolex Submariner and has a power reserve of 48 hours.

In 1977, Rolex debuted the "quickset" feature in the Day-Date (Ref. 18038) with the Caliber 3055. While previously, one had to set the date by turning the dial around, the quickset feature allowed the date to be set independently of the time. Therefore, the crown was extended by a second position. Today, this feature is the standard in all watches with a date display. The 30xx series also standardized the higher beat frequency when movements were updated from 19,800 to 28,000 BPH. The power reserve is 42 hours. The Caliber 3055 is remarkable in that it only ticked in the Day-Date (Ref. 18038). Calibres that are made specifically for a watch are extremely rare at Rolex. Other examples are the Chronograph Caliber 4130, which was specially developed for the Daytona, or Rolex' extremely complex Caliber 9001, which was developed for the Sky-Dweller.

If you inquire about the most famous and powerful calibres of the watch industry, chances are very high that the Rolex Caliber 3135 will be mentioned as an answer. Introduced in 1988, it is part of the tradition of the reliable calibres from the 10xx and 15xx series. 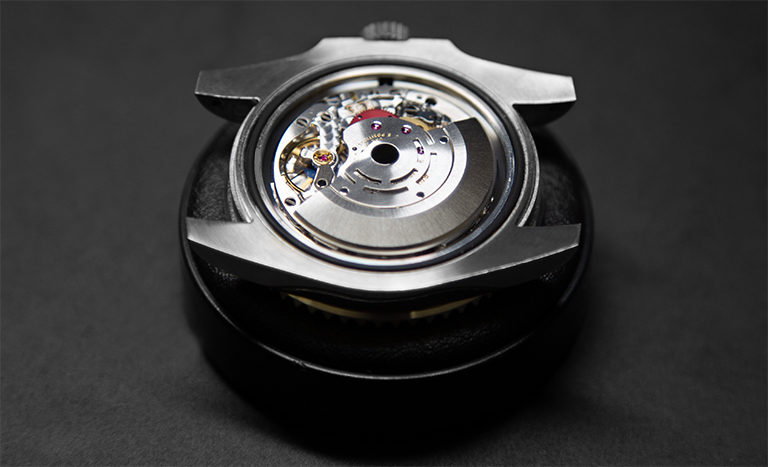 
With an automatic movement, date function with quickset mechanism and a Breguet hairspring, it quickly became one of Rolex's most famous movements and was a blueprint for new calibre designs for a long time. It is also by far the Rolex's most widely used movement and has been used in the Datejust, Submariner Date, Yacht-Master and the Sea-Dweller 4000 made between 1988 and 2008, among others. It has a power reserve of 50 hours. 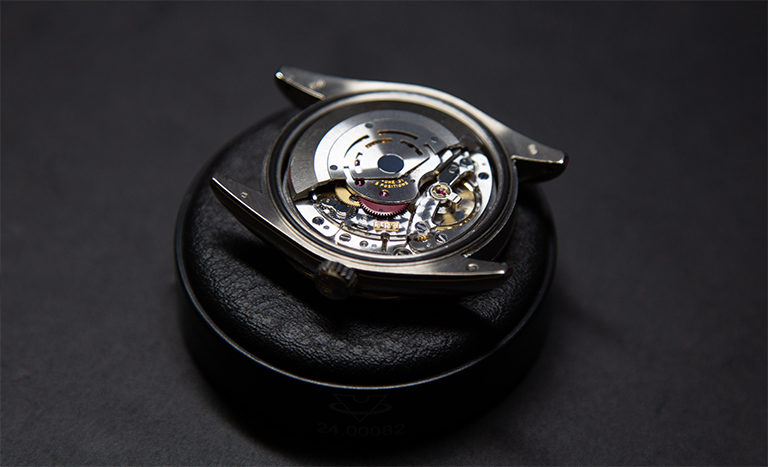 In 1999, Rolex introduced the Caliber 2235, the small, sleek sibling of the Caliber 3135. It was mainly used in ladies' watches like the Lady-Datejust and Lady Yacht-Master. Despite a size of only 20 mm, this model is just as reliable as the Caliber 3135 and has a power reserve of 42 hours.

While Rolex was modifying movements from Valjoux or Zenith for its earlier calibres, this would change ultimately at the beginning of the millennium. The company began to replace calibres supplied with the 10xx series with its own in the 1950s. Rolex finally became a movement producer with the Caliber 4130, which replaced Zenith's El Primero. This means that all movements since 2000 have been manufactured directly by the brand itself. The Caliber 4130 was also equipped with an innovative vertical clutch and has a power reserve of 72 hours.

The Caliber 3255, launched in 2015, showed that the company is not complacent about its past achievements. Rolex claims that it has redesigned 90% of the components it uses, including a new Chronergy escapement and a larger hairspring, resulting in a stronger maximum tension force. The Caliber 3255 was used in the 40 mm Day-Date models. It has a power reserve of 70 hours. In 2016, Rolex updated to Caliber 3235, which was introduced for the Datejust models in 2018. With the Caliber 3285, an update for the GMT models has also become available.