Oskar Schindler lived from 1908 to 1974 and was a member of the NSDAP, a successful entrepreneur, hedonist and named "Righteous Among the Nations". During his time as a factory owner, he saved scores of Jews from certain death at the hands of Nazi persecution. Through artifice, deception and bribery, he fought for persecuted and oppressed Jews. Schindler was a busy man and certainly had no time to lose. A reliable watch of good quality was more than just a status symbol for him. Let's take a closer look at Oskar Schindler's Longines watch as well as his life and accomplishments.


Who was Oskar Schindler?

The economic rise of Schindler began with a closed enamelware factory. A man with a keen sense of business, he took over the vacant factory in Krakow and quickly established himself as an entrepreneur and his company achieved considerable success within a very short period of time.

As an NSDAP member and recipient of high-ranking Nazi orders, Schindler would be able to save some 1,200 Jews from deportation to concentration camps as time went on. He began manufacturing field cutlery and shell casings so that his factory could be classified as a factory essential to the war effort. In addition to lucrative contracts, this offered him the possibility to request Jewish forced labourers, since their deportation would have negatively affected production. He did not shy from claiming that academics and children were capable metalworkers on paper thereby saving their lives – for which he and his wife risked their lives. Although Schindler was arrested and interrogated several times, he was always released from prison relatively quickly due to his good connections and his willingness to deceive.

After the end of World War II, Schindler received several honours, including the Papal Order of Saint Sylvester, the honorary title "Righteous Among the Nations" from the State of Israel and the Order of Merit of the Federal Republic of Germany, 1st class. After his death in 1974, his work was portrayed in a film entitled "Schindler's List" by director Steven Spielberg and won a total of seven Oscars. By the way, Liam Neeson wore a Bulova watch while playing Oskar Schindler on the big screen. However, this model is not the only one that has made an appearance in a movie. Also, several film villains have already been equipped with well-known watch models for their roles.

Schindler was by no means poor during his time of political resistance. Quite the contrary, as a matter of fact, his plant yielded so much profit from armaments orders that he was quite well-off, if not outright wealthy. Schindler's net worth at the time is estimated to be the equivalent of about one million euros today. With that in mind, it only makes sense that Schindler's watch was not just any cheap timepiece, but an elegant men's wristwatch by Longines. 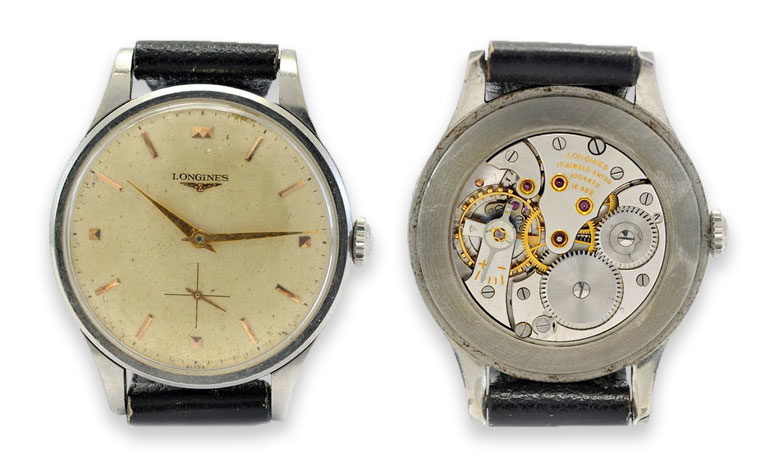 
Schindler's watch is a simple Longines watch, which was typical for the 1940s, with a round stainless steel case on a black leather strap, with rose gold hands and indices on a dial that was originally cream in colour. The dial colour has aged over time to become a vibrant yellow. The watch also features a small second at 6 o'clock as its only complication. The hand-wound calibre 12.682 is still in good condition and continues to perform today.

Several items from Schindler's estate were auctioned off to the highest bidder on March 3, 2019 by RR Auctions in Boston. In addition to a compass, two pens and one of his business cards, the auction also included the Longines watch.

Oskar Schindler's Longines significantly exceeded experts' estimates of just under 25,000 US dollars for the final bid. It was sold to an anonymous bidder for 46,303 US dollars. This is equivalent to a value of €41,000 to €42,000. This sum, however, is not only due to the historical value of the watch. Particularly valuable for collectors was the unrestored condition of the timepiece – never polished, never repaired, one hundred percent original. The fact that every scratch in the glass and every scrape on the case tells a story – as well as that the watch on Schindler's wrist experienced the darkest hours of German history – is of immense value to collectors and museums.

Although the auction house assumes that Schindler acquired the watch only after the Second World War in Argentina, this has never been confirmed. The idea that he had been accompanied and assisted by this timepiece during his arduous journey is more beautiful, in our opinion.