Rolex and its significance in golf

Rolex and the golf sport

For more than half a century, namely since 1967, the connection between the Swiss luxury watch manufacturer Rolex and the golf sport exists. It all started with Arnold Palmer, Jack Nicklaus and Gary Player. Rolex has always promoted outstanding personalities. With sport, culture or science, where excellent services are offered, sometimes these areas are eligible for a partnership with the Swiss manufactory. Through his belief in excellence and perfection, as well as breathtaking, playful achievements, Palmer, followed by Nicklaus and Player, gained sponsorship from Rolex. The three are legends in the world of golf, and they helped form the links between Rolex and the sport.

Since then, the company has always been very close to golf. This can be seen in the fact that Rolex not only supports women’s and men’s elite players as well as major tournaments but also promotes team competitions through worldwide amateur tournaments, international associations and organisations. In the latter, junior and senior golfers of all ages are represented. Rolex is proud to represent both young and senior pros, and the more than 50-year-old tradition of Rolex' connection to golf rests on the same pillars as the brand’s success: quality, reliability, precision and pioneering spirit. 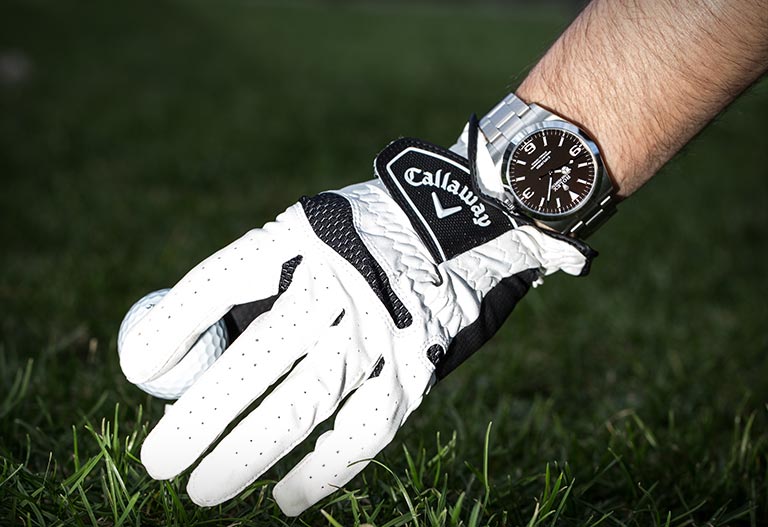 Arnold Palmer, Jack Nicklaus and Gary Player – the three legends from the world of golf together achieved a fabulous 34 major victories. Through participating in memorable tournaments, the „The Big Three“ passed on their love of golf to millions of viewers. They changed the game forever and made the sport what it is today. They also built the connection between Rolex and golf. As all three shared the fundamental values of the luxury brand: perfection, excellence and sporting spirit – each received a promotion from Rolex. In this way, the manufacturer linked with the world of golf and since then, both have conscientiously made efforts to maintains this special connection. 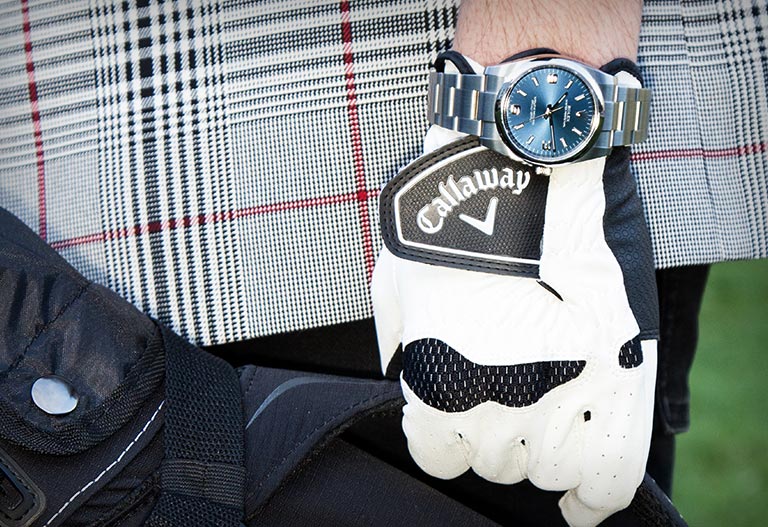 The Majors are the four largest golf tournaments in the world. The most gifted talents meet here year after year to demonstrate and measure their skills. Rolex is the official timekeeper and sponsors three of the four competitions. „The Open Championship“, also known as the „British Open“ or „The Open“ by fans, is the only major that takes place outside the US. Taking place since 1860, it makes it the oldest major tournament. The name „Open“ expresses that both amateurs and professionals alike are allowed to participate in the competition. But before you compete, you have to showcase your skills by winning a major or another highly ranked tournament.

Rolex has been part of the event for more than 30 years and has become an indispensable aspect of the event.  Large Rolex watches and crown emblems can be seen throughout the course. Jordan Spieth is considered one of the most recent young master of the majors. At only 22, he was already able to bring home the victory. He is the youngest player since Jake Nicklaus, who was able to win three of the four majors before he turned 24. A Rolex Explorer II 216570 shone on his arm as he received the trophy. He is the brand’s ambassador and among others to also own a Rolex GMT Master II. 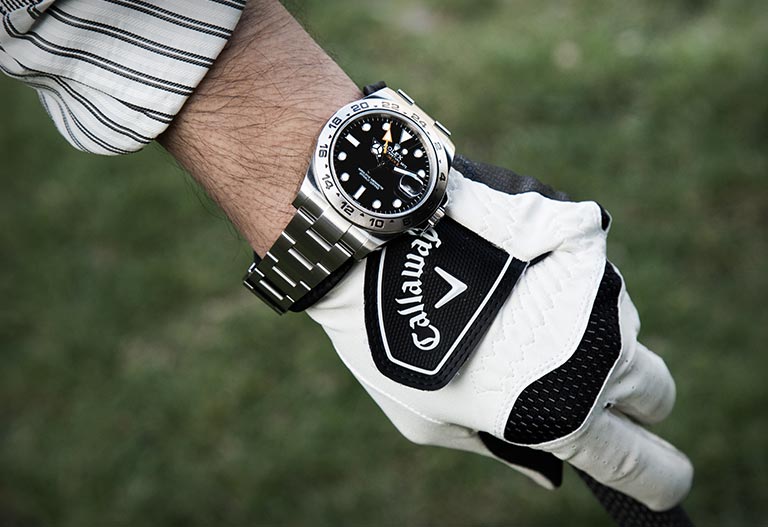 
The second oldest tournament is the „US Open“, which, as the name implies, takes place in the United States. The location of the event is different every year. It was first held in 1895 in Newport, Rhode Island. In 2018 the 28-year-old Brook Koepka won the challenging tournament with a Sea-Dweller 126600 on his wrist. Last year, he was able to bring home the victory, offering the spectators a premiere. The success story is even more incredible, considering that the pro golfer only really became known in 2012. Not surprisingly, Rolex signed him and he now acts as an official brand ambassador.

Undisputedly, one of the most famous golfers is Tiger Woods. In 2001 he won the U.S. Open for the so-called “Tiger Slam”. For the first time, a single man won all four majors in a row. Overall, he has claimed 14 major titles and is one of the most successful golfers of all time. Only Jack Nicklaus can outdo him with 18 Major titles. Tiger Woods has also been an official brand ambassador for Rolex since October 2011. In an interview, he said that the Rolex Deepsea Ref. 116660 is his all-time favourite. In addition to golf, diving is one of his biggest passions. He was looking for a reliable, yet elegant watch and describes the watch as robust, heavy and very manly. 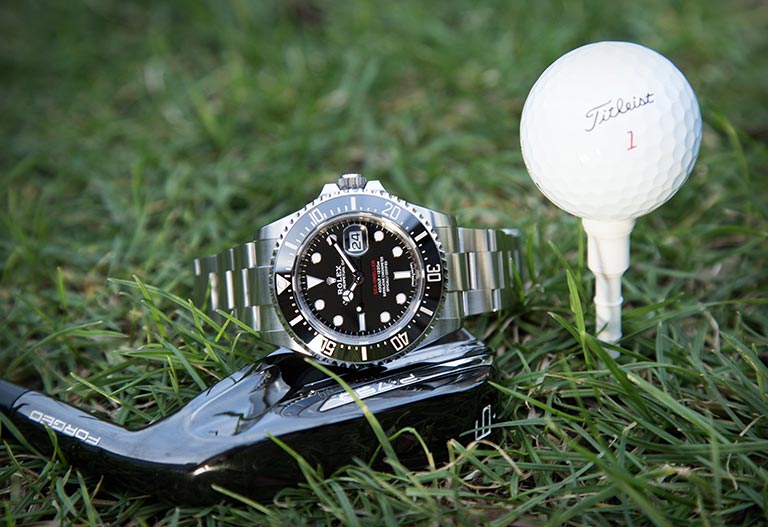 
The third major is the PGA Championship, first held in 1916. The tournament takes place every year in August, but similar to the US Open, its location changes each year. It is the only one of the four majors that is not sponsored by Rolex.

Ultimately in 1934, the Masters tournament was added to the elite circle. Every year in April, the doors of the Augusta National Golf Club open. In addition to a substantial amount of prize money, the winner gets a tailored green jacket. The winner may keep it for a year, then it is kept in the clubhouse to be worn only during visits. The talented golfer Jack Nicklaus brought the tournament into an extraordinary situation, which made the visitors smile. It is customary that the winner of the previous year helps the current winner into his jacket. However, Nicklaus won two consecutive years and unceremoniously put on his jacket.

Two other outstanding golfers athletes are Justin Thomas and Jordan Spieth. Not only do they have a close friendship, but both have also won several major titles, including the Masters. They also both rank among the top 5 golfers in the world. In addition, the pair are under contract with Rolex and are considered official brand ambassadors. Justin Thomas owns an elegant Rolex Yacht-Master and a Rolex Daytona, while Jordan Spieth uses the sporty yet elegant Rolex Oyster Perpetual Explorer II with a white dial.

So far, only golfing gentlemen have been discussed, but women also have a large fan base in Golfing. The Solheim Cup is an annual event in which the 12 best players in America compete with the 12 best in Europe. The three-day event was founded in 1990 and sponsored by Rolex since 1994.

The ladies majors are just as important events in the golf year as the ones of the male players. Young athlete Anna Nordqvist has already won two titles in the extremely demanding LPGA Championship and Evian Championship tournaments. Her wrist alternately adorns a Rolex Oyster Perpetual and a Rolex Datejust.

Lydia Ko has been firmly anchored in professional women’s golf since she was 17 years old. At 17, she became the youngest number 1 of all time in the world rankings. In 2012, she then won an LPGA event and won three years later the Rolex Player of the Year award in 2015. With that, she also got her first Rolex. This was an Oyster Perpetual Yacht-Master 37, and the athlete said that when she first saw the watch, she knew immediately that she wanted to own it one day. The watch combines the best of two worlds. On the one hand, its sporty and robust, and on the other hand, its an elegant, timeless and extremely high-quality timepiece. 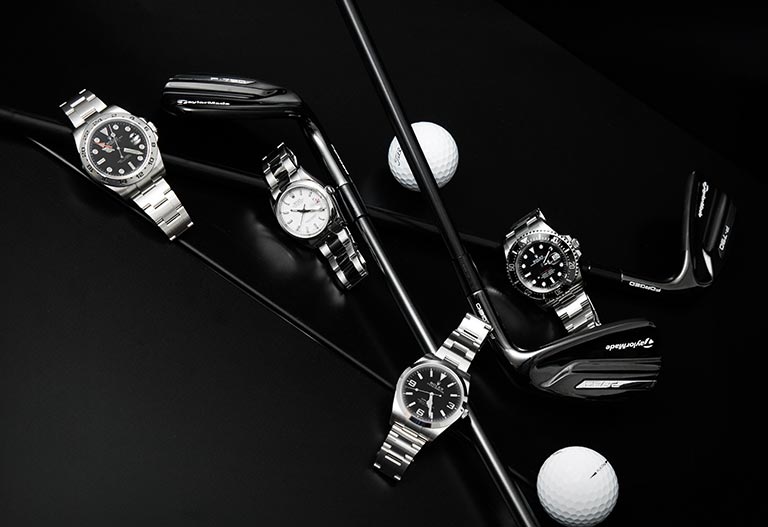 The success of an athlete is reflected in the total number victories in international tournaments, but how do you keep up a winning streak with more and more younger, fiercer competitors? Annika Sörenstam reveals her three golden rules, outlining how she managed to become the most successful golfer of all time with 89 high-level wins and 10 titles. It’s not just talent that makes a great athlete. Sörenstam says that she enjoys the game and always tries to remain true to herself. She says that she was never the fastest, strongest, or best player, but she managed to defeat those who had better premises than her with personality and hard training. In 1995, she was awarded “Rolex Player of the Year” and received her first Oyster Perpetual. Twenty years later she bought her second Rolex, also an Oyster Perpetual with the engraving “20 years with Rolex“.

As you can see, numerous top athletes are convinced about Rolex’s values. The watches are prestigious like no other brand, sturdy and timeless. Buy your used Rolex now with us and you will also enjoy such a luxury. Just call our customer service for a personal consultation. All watches are checked for authenticity receiving a certification from our master watchmakers.