Roger Federer is a one of a kind tennis player, a charismatic and style icon – no wonder he’s been a brand ambassador for Rolex for years. But who is the Swiss with the winning smile?

Federer was born on 8 August 1981 in Basel, the son of a Swiss and a South African. He possesses a Swiss and the South African passport and fluently speaks German,  English and French, which he repeatedly proves at press conferences. 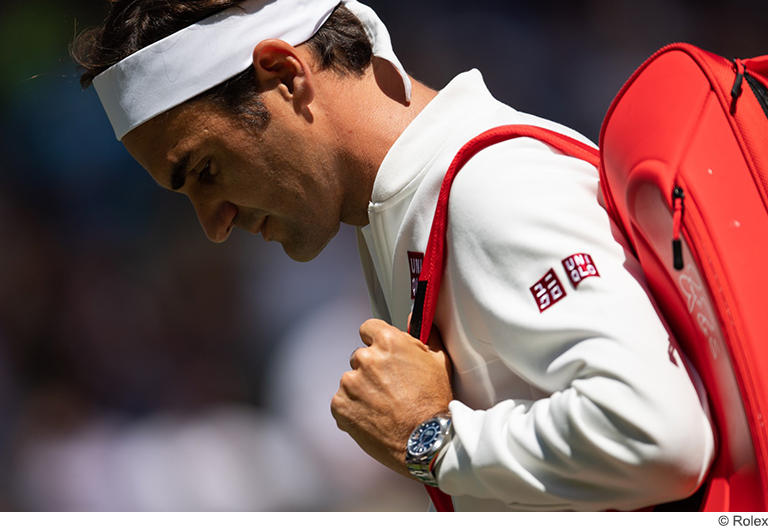 The native Swiss is in many ways an exceptional talent. Since the age of three, he stood on the tennis court. During his teens, he also showed interest in football and proved to be a talented player. Luckily for today’s tennis fans, at the tender age of 12, he decided to focus his energy fully on racket sports and left school at age 16 to become a professional athlete. A success: The 37-year-old is far from ending his sporting career, but is already celebrated by many as the best player in tennis history so far. His records are remarkable; In August 2018, he already led the world rankings for 310 weeks, of which 237 were consecutive. He is part of a few handful of tennis players to have won all four Grand Slam tournaments at least once. So far, he has won a fabulous 20 Grand Slam tournaments, 8 of which at Wimbledon making him the undisputed record holder here. Overall, he has won 102 ATP singles and 8 doubles titles.

In his private life, the tennis star also succeeded: Since 2009 he had been married to the former Swiss tennis player Mirka Federer-Vavrinec, and became the father of two sets of identical twins! In addition to his sporting achievements, he is involved as a UNICEF ambassador in social projects and is founder of a aid foundation creating projects for children, mainly in South Africa. 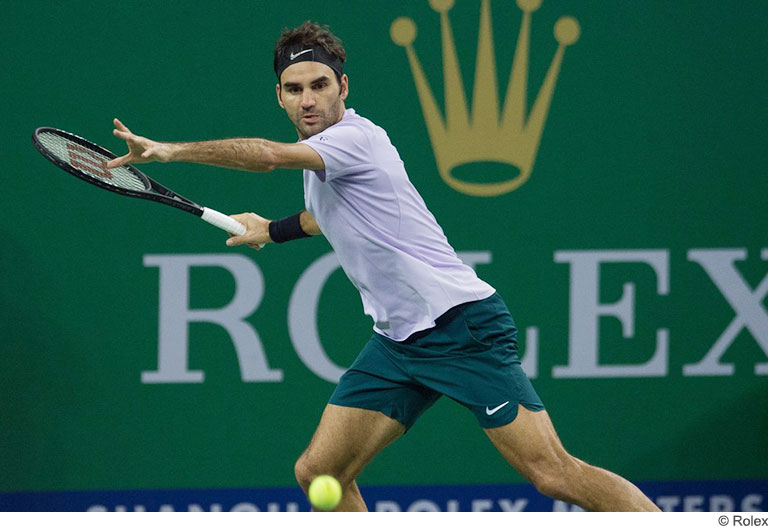 Roger Federer and his Rolex watches

Federer, undoubtedly has an extraordinary personality, and his connection to Rolex makes him even a little bit more interesting for us. Rolex and its commitment to the sport have a long tradition: for more than 40 years, the luxury company has been one of the main sponsors of the famous Wimbledon Grand Slam tournament. Whilst leading world ranked players deliver passionate grunt sounds, a Rolex timepiece hangs in the background. Regarding his personal relationship with Rolex, Federer says the watches accompany him everywhere, wearing them on the wrist even while he sleeps. They lie on his bedside table, and he is honoured to be part of the Rolex family. As a Rolex brand ambassador, Federer naturally wears his watches at award ceremonies, but he has also been seen repeatedly with different models in his private life. He also revealed that Rolex made it a habit to engrave his models to celebrate milestones in his athletic career – so we look forward to see if a Federer watch will be auctioned off at some point! If you want to decorate your wrist with the same models as the tennis champion, there is a wide selection, for Federer’s collection is large. If you decide to purchase a used luxury watch, pay attention to the certification, which guarantees authenticity.

We have put together for you our Top 5 Roger Federer Rolex models.

His Datejust II has special emotional value. The tennis star is associated with it during very special memories, as he reports in the Rolex campaign. It reminds him of the year 2009, which was particularly influential for him and his career. Federer won the French Open for the first time, the only Grand Slam tournament missing his name as a singles winner. But that was not all, he collected his 14th Grand Slam victory putting him on the same number as the previous record holder,  Pete Sampras. He started his Wimbledon tournament that year, hoping to beat that record. Sampras himself sat in the ranks and later congratulated Federer on his spectacular win – and the record break. The Swiss knew exactly how to hold the trophy and record, with a Datejust II on his wrist. He affirmed, "It also reminds me that you have to work hard. If you do not, somebody else will do it and eventually overtake you." His model is a Ref. 116334 made of stainless steel with a silver dial and blue Arabic numerals. 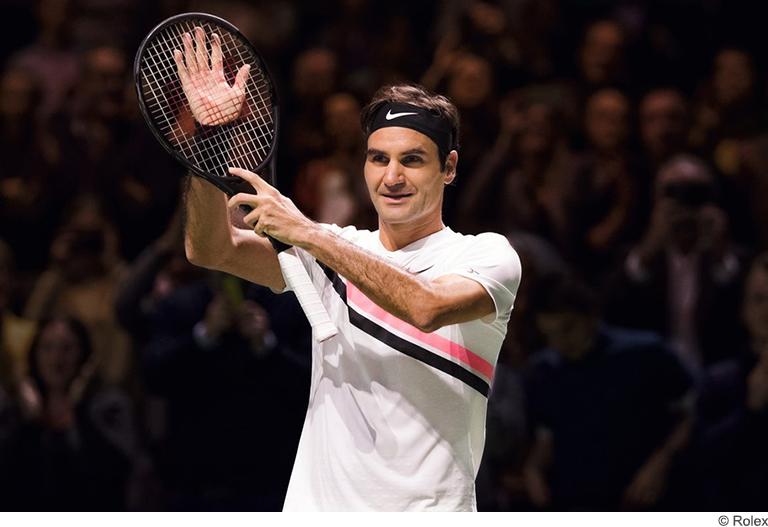 As is known, his own collection includes a vintage Rolex Daytona (Ref. 6263), which his wife gave him for his 30th birthday. The watch is from 1981, the year of birth of the tennis star and thus has a special emotional value for him. In the possession of the Daytona, Federer joins the ranks of true collectors: In their early days, the Daytona was more of a shelf keeper than a blockbuster, well-preserved vintage models are rare and expensive today. Actor Paul Newman made it popular and its hype continues today. Apparently he also likes the current Daytona collection. Federer owns a Ref. 116506 made of platinum with a pale blue dial and a chocolate brown Cerachrom bezel. It has an engraved tachymeter scale on the bezel and is equipped with a chronograph function. Federer was seen with it in 2012, when he beat competitor Andy Murray in the Wimbledon final and took home the title.

The GMT Master II has often been seen on the tennis player’s wrist, for example, at the Australian Open last year. His model is the Ref. 116710 BLNR, affectionately referred to as „Batman“ by fans. The eponym is its iconic two-toned bezel in black and blue. It is a bit more reserved than its popular sister with the blue and red bezel. The watch can display two different time zones, making it ideal for someone who travels as much as Federer. 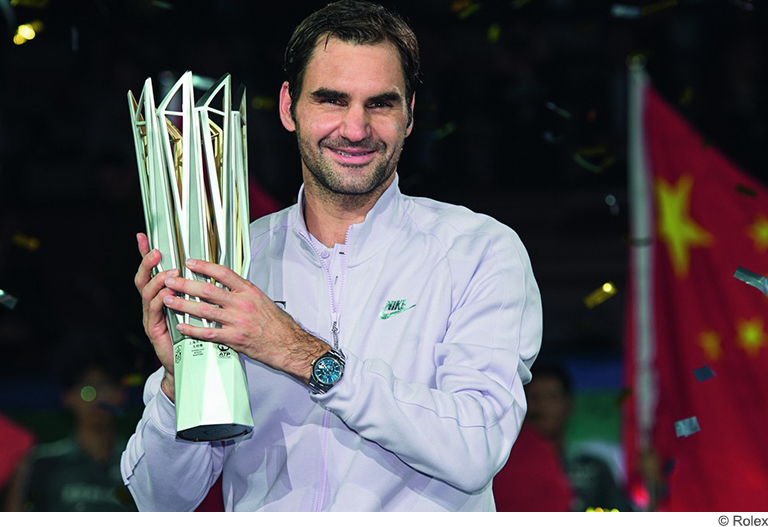 When Federer held up the trophy at the Miami Open in 2017, many watch fans may have been a bit jealous. To celebrate his great sporting achievement, Federer wore a Rolex Sky Dweller (Ref. 326933) on his arm. The model made of stainless steel with golden bezel and Rolesor bracelet was presented at Baselworld in March 2019, and was launched on the public market in September.

Matching his noble evening wear, Federer regularly selects a noble model: A Day-Date with the Ref. 228206 is his first choice with a suit. His model is made entirely of platinum with a classic President bracelet. Particularly striking is the large light blue dial and the applied Roman numerals. Other models are available in yellow gold and are provided with stick indices.