For decades, Rolex has been an established timekeeper and is, in fact, often the main sponsor for elite, demanding sports, in which the world's top athletes compete against one another. The repertoire of sports that are sponsored by the crown of Haute Horlogerie also includes motorsports. Rolex' brand ambassadors in motor racing include some of the world's best drivers, whose quest for perfection and the courage to test their limits for the best results perfectly reflect the values of the Geneva-based luxury brand.


Rolex in the world of motorsports

In addition to sponsoring various prestigious golf cups, tennis tournaments, sailing competitions and various equestrian events, Rolex has also been a global partner and official timekeeper of premier motorsports since 2013 – Formula 1. With 21 races in 21 countries on five continents, the FIA (Fédération Internationale de l'Automobile) relies on the precision of Rolex timepieces to keep time. As a sponsor of Formula 1, the brand's logo is omnipresent at the Grand Prix.

No matter whether watchmaking or motorsports, the will to exploit every ounce of ability in the hunt for the pole position is what connects Rolex to its brand ambassadors. One is racing legend Sir Jackie Stewart. He is regarded as one of the best drivers ever to have sat in a race car and, during his time as a Formula 1 driver from 1966 to 1973, he recorded 27 victories and three world championship titles out of 99 Formula 1 races. He received his Rolex Daytona in the late 1960s after a legendary Grand Prix race in Monaco. To this day, his Daytona reminds him of special moments in his career and has accompanied him for more than 50 years as a Rolex brand ambassador. 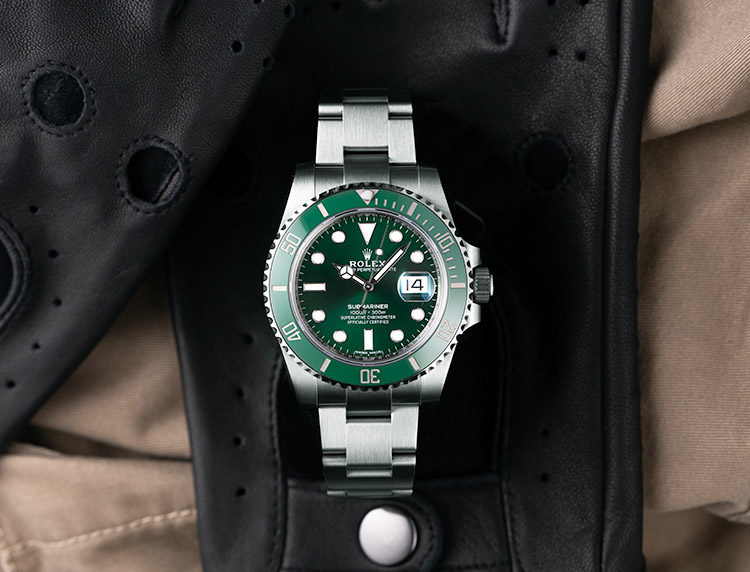 
Alongside Sir Jackie Stewart, Rolex brand ambassadors also include exceptional talents like Nico Rosberg and Mark Webber. Both drivers regularly demonstrated their skills in Formula 1 pit lanes and cockpits to earn their places in the Rolex family. Unlike Stewart's Daytona, however, their watches do not stem from motorsports. While Rosberg treated himself to a Rolex Submariner "Hulk" after the victory in Monaco, Webber reached for another high-end Rolex watch:

"After that first victory, I bought my Rolex GMT-Master II. I’d been looking to buy a very personal and special gift for myself; after a win like that, you want to have something that symbolizes the effort and, I suppose, all the sacrifice that you went through. I wanted to get something that was going to last forever, something that was going to be with me for my whole life and could go through generations. With the Rolex GMT-Master II, I knew I could get that." – Mark Webber

Webber has definitely made a wise choice with his Rolex GMT-Master II (Ref. 116710LN), and there is no doubt that future generations will also enjoy this timepiece. 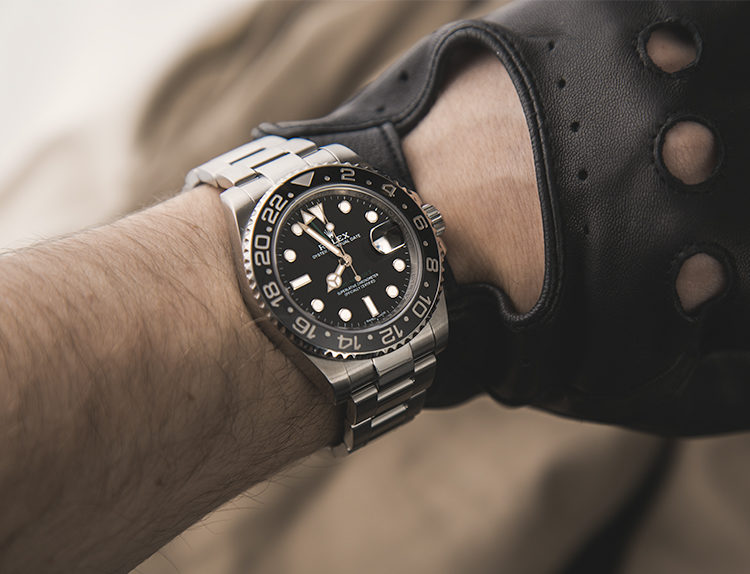 Rolex is also the official timekeeper at the World Endurance Championship (WEC), where the FIA itself monitors the implementation of and adherence to the rules. This still relatively young category of racing is full of technical innovations and demands everything from driver and machine in high-speed endurance races. The WEC culminates in the legendary 24-hour Le Mans – a race unlike any other in the world.

Tom Kristensen is one Le Mans veteran. The son of a racing driver and gas station owner, he was born into motorsports. He claimed his first Le Mans victory in 1997, failed to win the two following years and then conquered Le Mans in what is probably one of the greatest comebacks in racing history. In 2000, 2001, 2002, 2003, 2004 and 2005, a staggering six times in a row, Kristensen won the spectacular 24-hour Le Mans, creating an unbelievable landmark. Kristensen is one of the best drivers in the world and has undoubtedly earned his place among the Rolex brand ambassadors. And his watch? None other than the equally legendary Rolex Cosmograph Daytona – an icon among racing watches.

While Rolex only serves as a timekeeper for the aforementioned races, the manufacturer plays a completely different role at the following racing event. As the namesake main sponsor, Rolex has renamed the "24 Hours of Daytona" to "Rolex 24 at Daytona" and offers motorsports enthusiasts 24 exciting hours in which the drivers compete against each other in various disciplines. The high-speed track is only 20 % lit at night and demands a maximum of fitness and attention from every driver. Whoever manages the win in spite of adverse conditions in Daytona is awarded one of the most sought-after watches in the world. None other than a Daytona made of Rolex's proprietary alloy, Oystersteel. 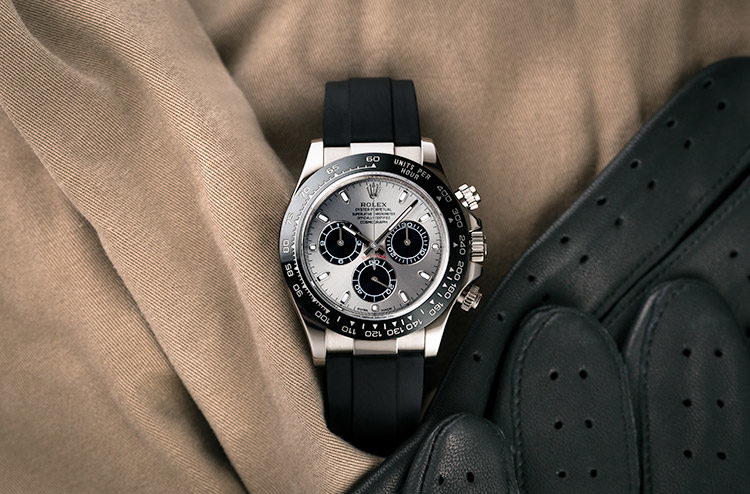 
History has always been written in Daytona Beach on the asphalt of the renowned track. The races at the track inspired Rolex to develop its eponymous Cosmograph and contributed to the global success of the Rolex brand. The racing team from Porsche, which has dominated Daytona with a record of 18 to 20 wins, is just as prestigious as Rolex. The two companies form a collaboration of luxury in the flickering air of Daytona. With such a partnership, there is sure to be plenty of excitement and adrenaline!

A touch of nostalgia: The Goodwood Revival

Rolex' drive to push boundaries is not the only characteristic reflected by motorsports, but there is also its sense of tradition and aesthetics. With the Goodwood Revival, Rolex acknowledges the golden era of motorsports as one of the main sponsors. The Goodwood Revival is the most famous event for historic race cars and includes races, shows and a weekend of adrenaline in an unparalleled environment.

Alongside the race cars of the past, historic airplanes compete in spectacular races. Goodwood sends you back to a time when gasoline was cheap and seat belts were not compulsory. By sponsoring this event for motorsports fans, Rolex makes a statement in respect to nostalgia and tradition that ensures the continued presence of these titans of motorsports.

For anyone for whom the charm of the Goodwood Revival is still not enough, Rolex also adds the Monterey Classic Car Week to its portfolio of sponsorships. During this week, Monterey dedicates itself entirely to the cars of the past. Similar to the Goodwood Revival, the focus is placed more on the cars than the drivers. The MCCW includes a race, shows, rallies, auctions, wine tasting and much more. With their sponsorship, Rolex offers a get-together for fans of vintage cars and classic design. As a sponsor, Rolex would never miss the opportunity to act as sponsor for the single race at this event. The Monterey Motorsports Reunion is the largest event of the week, where around 550 cars are invited to compete in various classes. Participation in the race is only permitted if the cars pass the guidelines for authenticity. 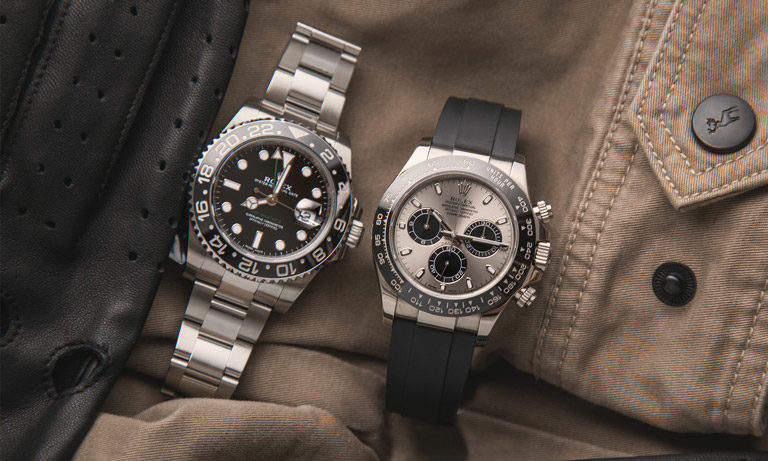 
Celebrate your own successes with a Rolex

There can be many different reasons for buying a Rolex. One thing is certain, however, and that is that there is always something triumphant about buying a watch from the Swiss manufacturer. With a Rolex, every time you look at the dial, you remember what you have accomplished. Take the pole position of life and celebrate your achievements with a Rolex from our collection.

END_OF_DOCUMENT_TOKEN_TO_BE_REPLACED 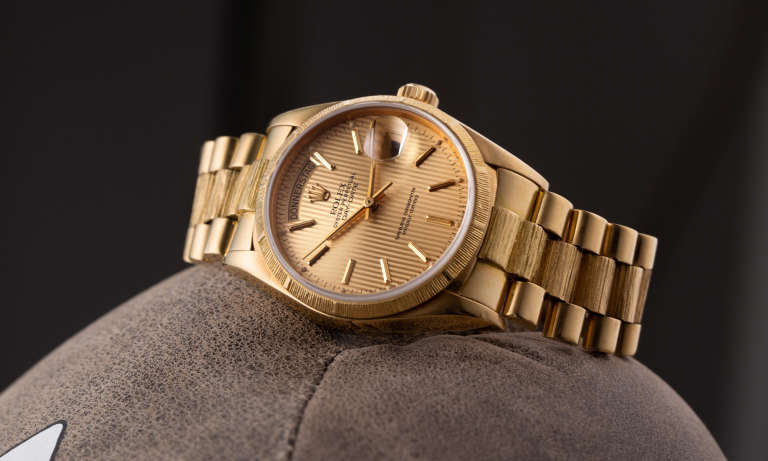 Modern gladiators If you've ever attended a boxing match, you know the thrilling feeling in the air when two athletes mercilessly clash at the peak of their physical abilities like forces of nature. The origin of this archaic sport stretches back to the ancient Egyptians in 3,000 BC when two opponents measured their strength solely by means of their fists. Even today, more …