Of legends and kings: The Rolex King Midas

One of the most renowned designers and free-spirited people in the watchmaking world, Gérald Genta is best known for his iconic designs of the Patek Philippe Nautilus and Audemars Piguet Royal Oak. But even before these two heavyweights of Haute Horlogerie were created, the “Fabergé of Watches” designed a very special watch for one of the most famous watch brands in the world. The Rolex King Midas was born.


The legend of King Midas

According to legend, ancient Greece was once ruled by a king eager for knowledge named Midas. In order to acquire the wisdom he had not gained yet from one of the masters of the god Dionysus, he decided to capture him. Dionysus demanded his master back and was to grant Midas a wish in exchange. His wish was granted and thus everything the king touched turned into gold. Well, so the legend goes. But one thing’s for sure, gold has always captivated mankind through the ages. Wars were fought over the precious metal and entire kingdoms fell. Today, we can also thank alchemists for the world-famous Meissen porcelain which came about as a result of their failed attempts to produce gold from base metals in the 18th century. 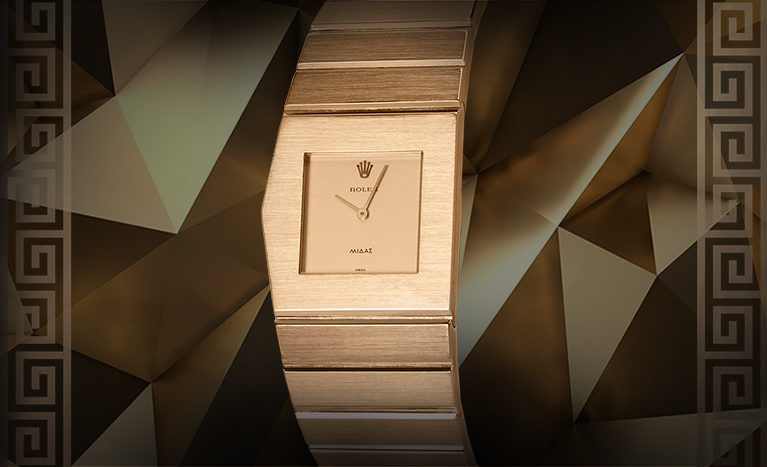 
The origins of the King Midas

The 60s saw the birth of some of the greatest design icons. The Ford Mustang is just one example from this era. It just so happened in that very decade that none other than Gérald Genta designed a very special watch for Rolex in the style of the Greek King Midas, which had fans worldwide waiting with bated breath – but only temporarily, as once the silence was broken, the excitement surrounding the watch was huge.


The design of the Rolex King Midas

The revolutionary the King Midas features an uncharacteristic design for Rolex in every respect and reflects the high culture of ancient Greece, not only through the choice of material, but most notably because of the asymmetrical, near pentagonal shape of the case. The case is designed to resemble the Greek Pantheon, with the winding crown on the side fashioned to look like the sun. The “King Midas” lettering also takes up an atypical position for Rolex. This is engraved on the same side of the case as the crown rather than on the dial as usual. 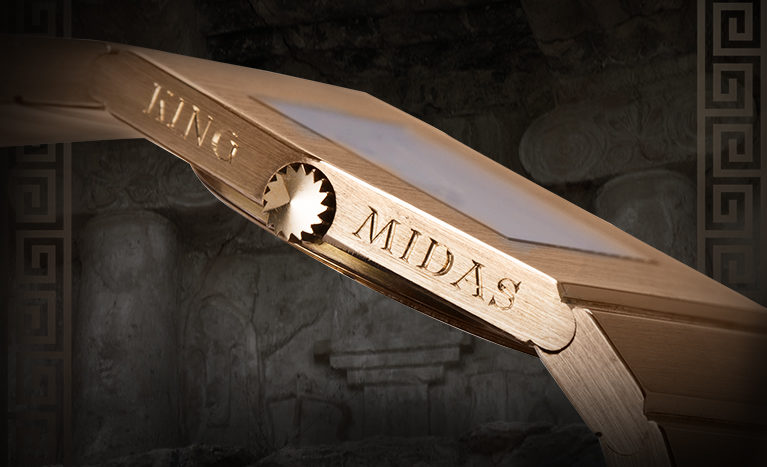 
The mostly champagne-coloured dial has a minimalistic layout, making it very easy to read. There are also models in silver and even rarer versions in red or amber. Only the Rolex logo and the lettering at 12 o'clock, as well as the word “ΜΙΔΑΣ” (MIDAS in Greek characters) and the marking “Swiss” at 6 o'clock, adorn the face of the King Midas. In addition, this watch surprisingly has no seconds hand at all.

Naturally, the choice of material had to be worthy of the ancient Greek royalty that the watch is named after. Only white and yellow gold was used for the Rolex King Midas. The individual links of the bracelet are also made of solid gold in reference to its eponym.

This opulent design and the extremely low production output made the Rolex King Midas the most expensive watch in the range of the Geneva-based watchmaker. With a 27 mm case diameter, this rather small men's watch weighs around 150 to 200 grams despite the use of the Calibre 650, which is one of the thinnest hand-wound movements ever made by the manufacturer.

Another revolutionary development that came with the Rolex King Midas was the sapphire crystal. The Midas was one of the first watches from Rolex to be fitted with this robust watch glass, which would be used in virtually every other watch thereafter.

A special box for a special watch

As if the King Midas from Rolex wasn't extraordinary enough on its own, the box that was designed for it also exceeds all expectations. While most Rolex watches come in a green box with a light velvet inlay, the King Midas is presented in a box with a shape resembling an ancient Greek amphora. The box for the King Midas is made of black wood with red embossing in the style of Greek paintings and reveals the stunning timepiece inside, nestled on red velvet. 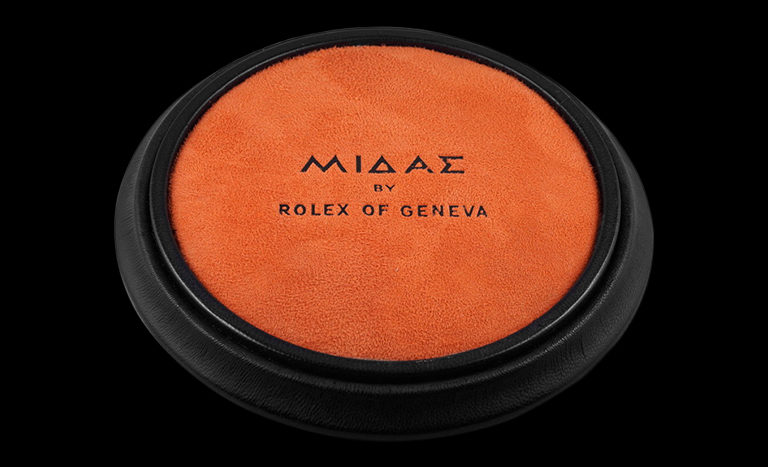 
Even the packaging of the box stands out: it comes in snow-white and bears an embossment that shows King Midas and his followers, like the lid of the box – but it is in gold here rather than red. The classic Greek Meander pattern runs along the cover of the box, which makes the appearance of the box strongly reminiscent of Versace products. However, this pattern appeared on a Rolex box at a time when Gianni Versace was just a child still.


Famous wearers of the King Midas

A Midas for the King

The most famous wearer of the Rolex King Midas was probably none other than the “King of Rock'n'Roll”, Elvis Presley. He received the precious King Midas as a gift from a promoter after six shows in a row at the Houston Astrodome were sold out. His watch, the referece 9630, was a yellow gold model and can still be seen today as part of a permanent exhibit at Graceland.

The King Midas on the big screen

However, it wasn’t just Elvis that turned out to be a fan of the King Midas: actor and Spaghetti Western star John Wayne also owned this particular Rolex. Following his death, his watch was sold at auction for an incredible $26,000. But if you think that the Rolex King Midas was only admired and appreciated by the stars of the era, you are most certainly mistaken. The King Midas enjoyed one of its greatest appearances in the James Bond film “The Man with the Golden Gun” on the wrist of contract killer and Bond’s adversary Francisco Scaramanga. 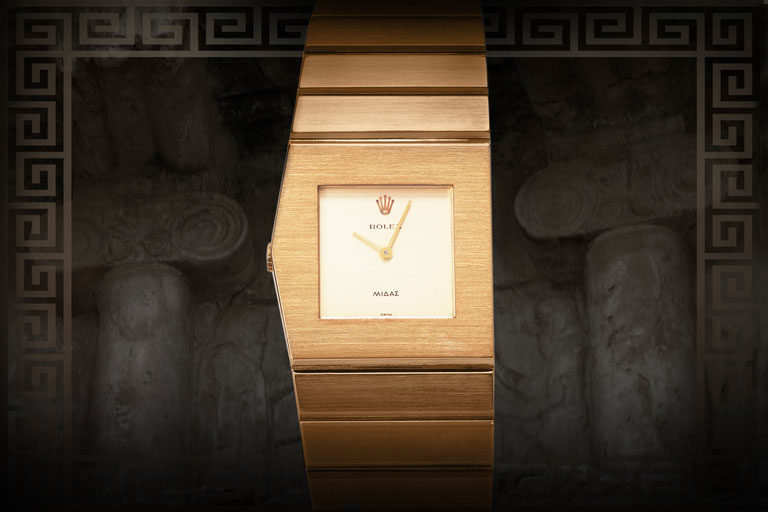 
What makes the Rolex King Midas so special?

The Rolex King Midas has been a real rarity since it was released in the early 1960s. It stands out from the Rolex range like no other watch. Arguably designed by the greatest watch designer in history and as one of three series that were in fact strictly limited by Rolex, the King Midas is considered an absolute rarity. In addition, they are naturally crafted from valuable materials and have been worn by prominent figures over the years. These are all interesting facts that make King Midas such a collectible item.

Unless you're on special watch forums, you'll very rarely come across a King Midas watch – this is also in part due to the fact that the components from the King Midas series were later incorporated into the Cellini series. Initially, only the “Midas” lettering changed, which was replaced by the “Cellini” lettering that is still used today, until the entire iconic design was changed over time and the King Midas became a thing of the past. For many watch lovers, this is, unfortunately, a sad reality, because the King Midas combines an interesting piece of brand and design history and the model was very popular with many famous wearers.