The dials of the Rolex Submariner

They say that it is what's inside that counts. However, when it comes to the value of a used or vintage Rolex, small details on the surface often make the difference between a classic luxury watch and a rare collector’s item. We will tell you about the different dials on the Rolex Submariner as well as their special features and offer insights into the exciting history of this world-famous series.


The development of the Rolex Submariner dials

The nameless Submariner – less is more

Rolex sold its first Submariner models as early as 1953, one year before the model's official launch. The Submariner Ref. 6200 was marketed specifically for divers and at that time had an exceptional water-resistance of 200 metres. Marketing genius Hans Wilsdorf knew how to make the durability of his watches popular by backing sensational record attempts. Those models with the “3-6-9” dial are considered an absolute rarity today. This reference includes both line indices and Arabic numerals. Rolex fans will associate this design with the early references of the Explorer and are absolutely right. In its early days, the Submariner was the aggregate of different Rolex designs.

Two other Submariner references, Ref. 6204 and Ref. 6205, were launched at the same time, which had a slightly decreased resistance to water. The Arabic numerals were removed from these references. One more interesting detail on the first dials of the Submariner is that the name of the watch is missing. Some experts believe that Rolex had difficulties registering the name of the series at that time. Also the information about water-resistance was completely missing. One can say as a rule of thumb for collecting vintage Rolex watches: less is more. The less on the first Submariner dials, the more valuable the watch is.

First alterations to the Submariner dials

In 1954, Rolex celebrated the debut of the Submariner series at Baselworld. From then on, the models were all waterproof up to 200 metres. The “Submariner” lettering was also given a permanent place on the dial. The hour hand was provided with the typical luminous dot, making confusion of the hour and minute hands a thing of the past. Two years later, in order to further improve the readability of the dial, the luminous point of the second hand would be moved towards the centre of the watch.

Seeing red: The Red Sub and its many faces

1966 brought a paradigm shift to the design of the Rolex Submariner. The Rolex 1680 was the first model with a date display and a magnifying lens. In particular, the Red Sub models of the reference 1680 are popular collector's items. These models of the Submariner are known as “Red Sub” if they have a red Submariner lettering. However, Rolex only produced this version at the beginning of its production period. 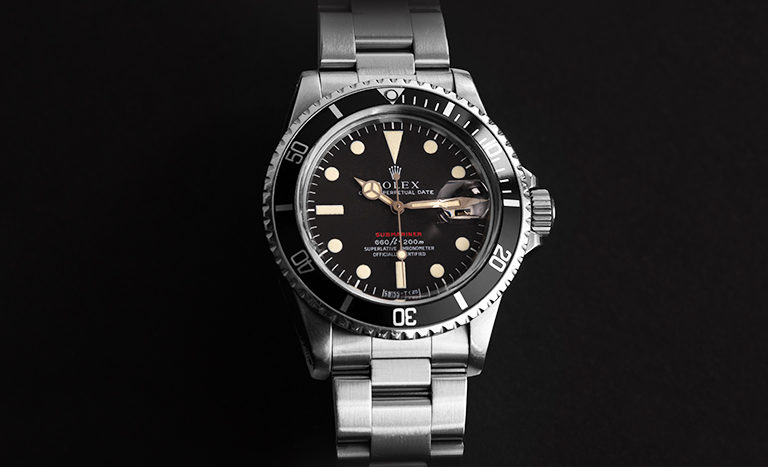 
However, the red lettering would not be the only dial variation on the Rolex 1680. During production between 1967 and 1971 alone, six different Submariner dials were produced, which collectors label with Mark I to Mark VI. The reason for these variations is that Rolex relied on several suppliers for specific watch components at that time. Renowned companies such as Beyerle, Singer and Gay Frères supplied the Geneva watch manufacturer. As a result of different manufacturing processes at the suppliers, however, there were variations in the Submariner dials. The models varied in their typeface, as well as in the position of the indices and lettering. The Mark I dial, which can be identified by the closed sixes for the foot information for depth, is particularly rare.

The Submariner Mark II and Mark III dials are also unique, as the colour scheme was never planned and therefore cannot be reproduced. Due to a manufacturing defect, the dials have turned brown over time as a result of sunlight and heat. The so-called “Tropical Dials” in Submariner watches are particularly difficult to find.

The lasting success of the Submariner motivated Rolex to produce a reference in precious metal. The company used a model in white gold for its experiments. However, despite some prototypes, the idea was not ultimately implemented. Instead, Rolex gave its flagship model a new coat, laying the foundation for a design concept that the watchmaker would continue to revisit. The case and bracelet were made of white gold, while the dial and bezel were in bright blue. Introduced in 2009, the 116619LB is also nicknamed “Smurf” because of its colouring. 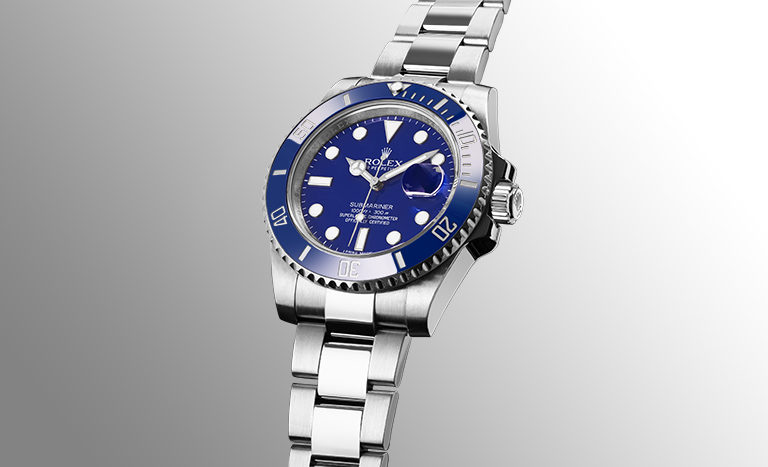 Anniversary without radiance: Submariner dials at the turn of the millennium

At the end of the 1990s, Rolex switched from tritium to Super-LumiNova for its fluorescent material. In contrast to materials used in the past, Super-LumiNova is not a radioactive material, but a coating that is charged by external light and then emits this light again.

In 2003, the Submariner celebrated its 50th anniversary and added a little extra to the dial in the form of a maxi dial and a wider minute hand were the result. The reference 16610LV became known as “Kermit” on account of its green bezel and was in production from 2003 to 2007.

Another chapter for the Rolex Submariner dials

In 2007, the Rolex Submariner (Ref. 14060M) changed from a two-line dial to a four-line dial. It received the title “Superlative Chronometer Officially Certified”, which is a seal of quality for luxury watches. The new dials also had a slightly different typology. The “f” in “Feet” was kept short, while the two-line references were still long and curved. But again, there was a short transition period during which models were produced that had both four lines and the curved “f”. In English-speaking countries, the Submariner references with the curved “f” are also referred to as LGF for “Long Good F”. 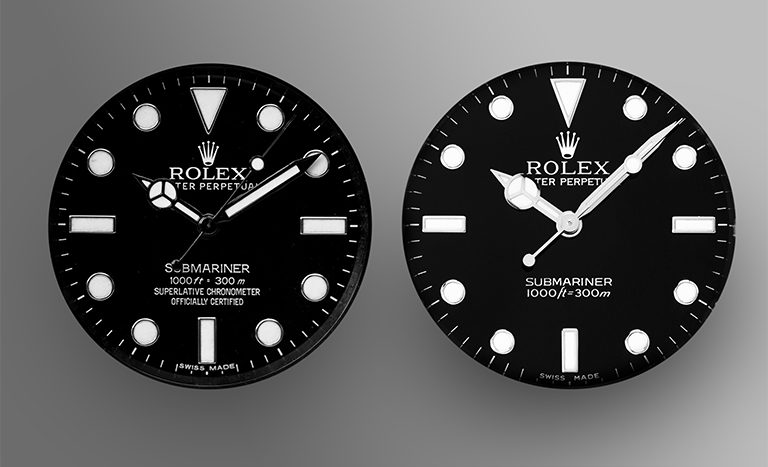 Another reference has been added to the Submariner series in 2010 with the 116610LN. Since its release, however, there have been five different dial variations.

The prototype dial, also known as Mark 0, is very similar to that of its predecessor 16610, with a curved “f” in “ft” indicating the water-resistance in feet. Additionally, the spacing between numbers and characters is very small. From 2010 to 2015, dials for the Mark 1 variant were produced. On this model, the “Date” lettering starts after the “x” in Rolex. The “1” in the 1,000-foot indication of water resistance has a small upstroke. The “f” is no longer curved and there is a small space between the “300” and the “m”. On the Submariner Mark 2 dials, the distances before and after the “m” of “300 m” have been adjusted. Rolex then made several changes when switching to the Mark 3 dial. The “1” of the “1000 ft” no longer had an upstroke and was based on the GMT-Master Stick Dials. The “f” of “ft” was curved again. The equal sign was changed to an italic form and the distance between the “300” and the “m” disappeared. These dials were used on the Submariner from 2015 to 2017. As of 2017, the Mark 4 dial is available with a “Submariner” lettering in bold print and a clear distance before and after the equal sign between the water-resistance in feet and metres.


Why are there so many different dials on the Submariner?

Naturally, it is an advantage for someone interested in a Rolex Submariner if it has been precisely catalogued which dial belongs to which model series. However, if you collect vintage Rolex watches, you are faced with the difficulty that it is often impossible to tell which Submariner dial is or was the “original” dial from the series. This is due to the fact that Rolex initially purchased the components for its watches from many different suppliers, as was common in the past. In the early 20th century, it had not yet become the standard in the watch industry for companies to use a uniform look for their watch models.

Today, Rolex is one of the most popular watch brands in the world. The response to each new reference is correspondingly high. One should also bear in mind, however, that Rolex often presents prototypes as part of its product presentations, for example in catalogues or at Baselworld. In turn, series production presents completely different demands on the make-up and design of a watch. Consider that Rolex produces 1,000,000 watch models per year, which means that prototypes might be used for marketing purposes and can differ from the standard watch models available. The fact that the shape of the Submariner models has changed only marginally over the years makes it clear that Rolex created an unmistakable design early on, for which there was no compelling reason to fundamentally change the references. A fact for which Rolex is held in high esteem worldwide.