By Info Watchmaster, 24 March 2021
Moon phases – totalizers, which show the progression of the moon phase, are no longer only inspiring for astronomers. Although less practical than the perpetual calendar, they are among the most beautiful and most requested complications for many wearers. In this guide, we’ll give you a historical overview of the development of watches with a complication for the phase of the moon. We will also explain how to quickly and easily set the moon phase display of a watch.

The ancient origins of the moon phase display

Historically, the moon phase display goes back to ancient times: the earliest finding is the mechanism developed in Antikythera from 205 A.D., which could show the position of the moon, the planets known at that time, the current date and that of the next Olympic Games.

This mechanism was so complex that it was not considered obsolete until the appearance of the first astronomical clocks a thousand years later. During the Renaissance, large, elaborate clocks were produced that hung in cathedrals and churches and propagated the former religious view of the world with the earth at its center.

When the Church recognized the sun's central position during the Enlightenment, these clocks quickly went out of fashion. However, large grandfather clocks brought the lunar phases back into private homes of the bourgeoisie during the 16th century. In 1925, Patek Philippe exhibited the first ladies' watch with moon phase and perpetual calendar. 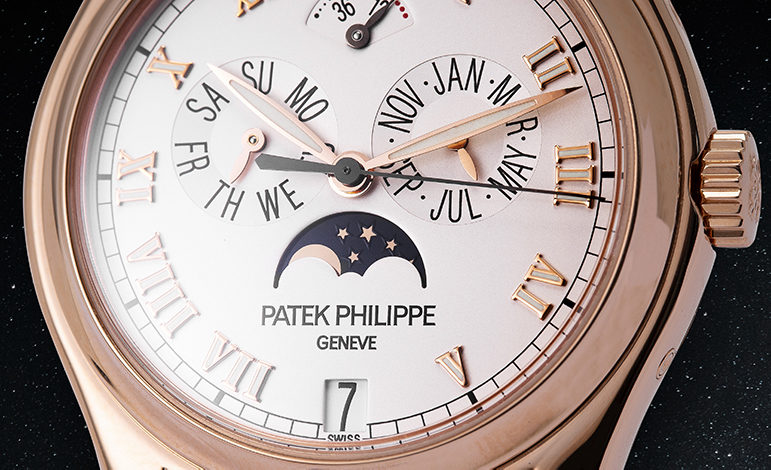 
Evolution of the moon phase mechanism

However, the mechanism remained the same in these early timepieces: every 24 hours, a gear wheel with 59 teeth rotated one tooth further. This gear was connected to a dial with two moons – a new moon and a full moon. Only one of the two moons was visible at a time, which slowly waxed and waned and switched after about 30 days. When there was a new moon in the past, the dial would simply remain empty.

Now, this mechanism would be much too imprecise. It is now known that the exact phase of the moon is 29.530587981 days long. It has been calculated that a 135-tooth gear operates precisely for up to 122 years – more than enough for a lifetime. Brands such as A. Lange & Söhne and Patek Philippe have actually developed watches with moon phases that run precisely for up to 1,000 years. However, this accuracy does not amount to much if a watch does not receive regular care and maintenance. As a rule, this servicing is necessary every three years for watches with moon phases.

The moon phase complication is so specialized that particularly small watch brands have been able to establish a name for themselves in this field. Christiaan van der Klaauw is a master in the field of astronomical clocks and has managed to achieve accuracy for 11,000 years with the Real Moon Joure. However, even this is virtually nothing compared to Andreas Strehler's Sauterelle à lune perpétuelle, which operates reliably for up to 2,045 million years.

Andreas Strehler has achieved this high precision by using four gears with teeth on both the inner and outer edges. To put it very simply, when a movement has more teeth, it can calculate higher prime numbers and more complex fractions and thus calculate the aforementioned decimal places of the moon phase more exactly.


How to set the moon phase on your watch

As complicated as this mechanism may be, it’s simple to set. Press the corresponding pusher that controls the moon phase of your watch and first set it to full moon, i.e., until the moon is in the middle of the window. Now, find out when the last full moon was with the help of a calendar. Count how many days have passed since then and press the pusher this number of days. And now, the moon phase has been correctly set. An example: today is August 15, 2019. The last full moon was August 30, 2019, which was 15 days ago. The pusher therefore has to be pressed 15 times.

Frederique Constant has made a name for itself with its reasonably priced dress watches, which are especially aimed at younger wearers who value automatic movements and a sophisticated design concept, but who also have a clearly defined budget. 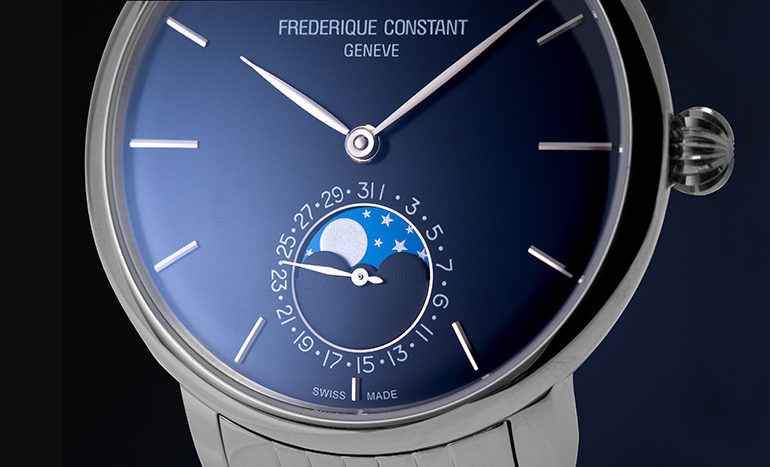 
With the Slimline, Frederique Constant enters the segment of flat watches. None of the models in this collection is taller than 3.6 mm and thus smoothly slides under any cuff. With its brilliant, blue dial and subtle line indices, this timepiece with the Ref. FC-705N4S6B distinguishes itself from the brand’s traditional white dress watches and confidently emphasizes its own style. The moon phase is at the 6 o’clock position and is surrounded by a date hand.

Naturally, the first watch on the moon could not fail to include a feature for moon phases. This little outsider with the Reference 3575.20.00 from the Speedmaster Professional series by Omega is one of the few models with moon phase. However, its rare nature is more due to its design. The shape of the case is based on the classic Moonwatch and the engraving on the back refers to the history of the series, but also clearly departs from it with a bezel in white gold. The interplay of white gold, stainless steel, the ivory dial and the wide blue hands is captivating, even without "Moonwatch" in the name. 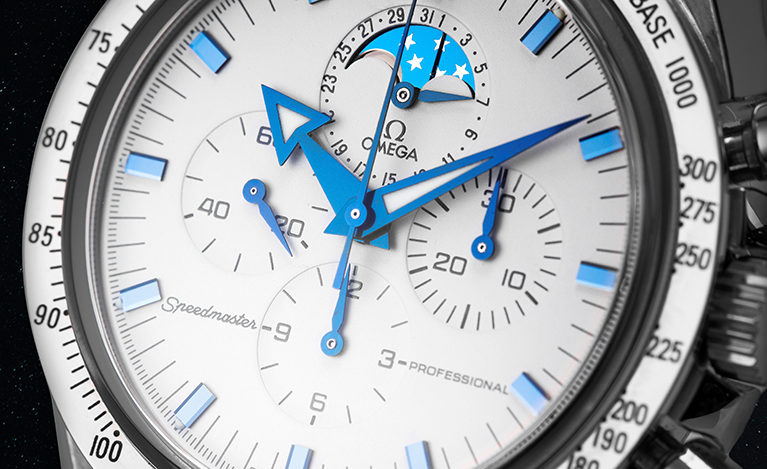 The moon phase was originally part of every perpetual calendar and no brand has been more in love with these calendar functions than Patek Philippe. In 1889, the company patented the design for the perpetual calendar of its pocket watches and since then has worked constantly to improve the mechanism. In 1996, the company finally obtained the patent for the annual calendar, which has to be adjusted once a year in February. The case and bracelet of the Reference 5036/1R are in yellow gold. The dial shows Patek Philippe's classic layout for the perpetual calendar with day and month on the two totalizers, a small power reserve display at 12 o'clock and the crescent-shaped moon phase above the date at 6 o'clock.