The post-processing and finishing of a movement is one of the most significant quality marks of a watch. It is not without reason that finishing techniques have long been regarded as one of the most important criteria of the fine art of watchmaking. Glashütte has been able to stand out from the crowd especially because of its sophisticated and complex cutting and polishing techniques. Let's take a look at the most important grinding, polishing and engraving techniques used in Glashütte's finishing work, that is the refinement and decoration of a movement. These techniques are not only for aesthetic reasons, but also serve practical purposes, since the finishing of a watch ensures that the movement runs smoothly and accurately.

Refinement has enjoyed a long history in Glashütte. As early as 1870, the watchmakers there had begun decorating the movement with elaborate patterns. Initially, this technique was used to conceal irregularities in the plate and to repair defects. However, these artistic movement decorations soon established themselves as an integral part of Haute Horlogerie and are still used today by renowned manufacturers such as Nomos Glashütte, Glashütte Original and A. Lange & Söhne.

The cut is the first stage of the finishing process and is used exclusively for decorative purposes. Most decorations are so delicate that they can only be seen and admired with the help of a magnifying glass. In Glashütte, the Mecca of German watchmaking, a strict system has been established in which each part of the movement is given a particular type of finish.

The many denominations for this sanding technique which are often named for the origin of their production: Swiss movements receive Geneva stripes, while all movements processed in Glashütte are given Glashütte stripes. 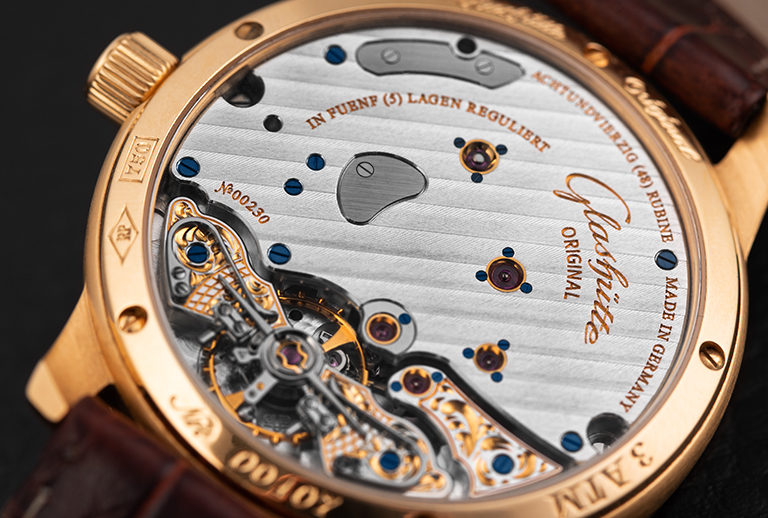 
In the case of Glashütte ribbing, a grinding spindle is guided in a straight line over the movement component and all stripes are ground individually by hand, making every watch unique. In order to achieve the necessary depth, up to three passes are occasionally necessary. When a stripe is finished, the movement part is moved by the width of one stripe and the process is repeated.

The plate is placed on a rotating disc for perlage and is machined with a rotating tip treated with diamond dust while the disc is moved in a regular circular motion. This creates pearl-shaped circles (also known as "pearls") one after another, with the new circle overlapping the centre of the previous one. The pressure to be applied to the component varies according to the diameter of the pin. In order to obtain a uniform pattern in the end, it is essential that the pressure is uniform throughout the procedure. Other names for this work are "pearl pattern" or "perlée".

Similar to stripe finishing, the component is passed under the spindle and ground. However, this is done in circular movements which gives the Glashütte sunburst finish curves, in contrast to the classic, straight-line sunburst pattern. Depending on the angle and incidence of light, it might be possible to see a small sun or perhaps the pattern of a snail. 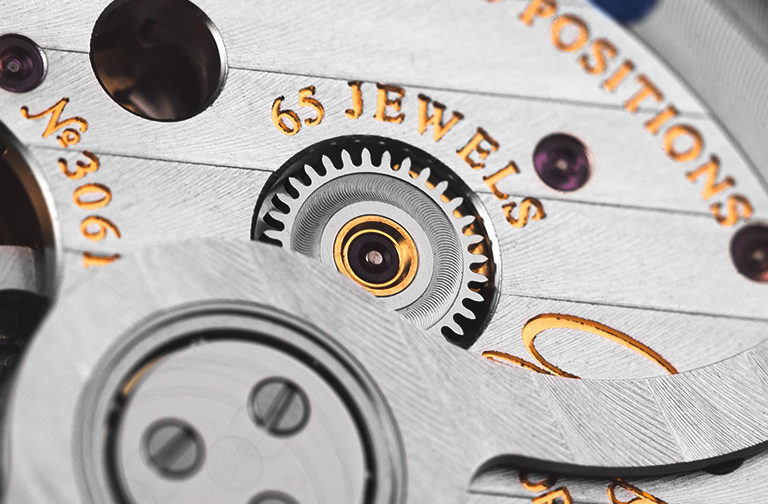 For the circular finish, the part is placed on a rotating disc similar to the perlage process. The cut is made with a slate stick or an emery file around which the piece is rotated.

The brushed finish is characterized by a fine structure of parallel lines. It is created by rubbing the component lengthwise against very fine sandpaper. 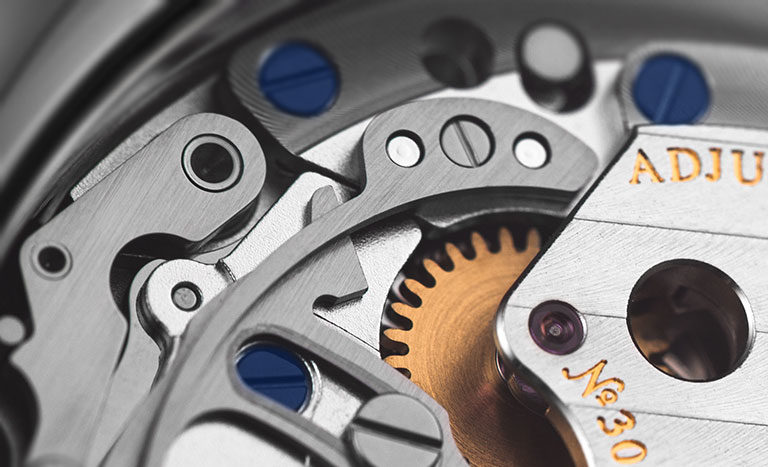 
Glashütte polishing: How a watch receives its shine

Polishing not only serves an aesthetic purpose, but can also help to minimize friction on operational surfaces such as levers and springs to increase a movement’s durability. A polish is also used during a revision among other things. To make a watch shine again after prolonged use, the case is polished in addition to cleaning the movement.

During flat polishing, the parts are gently rubbed on a fine-grained diamond foil in a figure-eight motion. This results in a smooth, mirror-like surface on the material.

The corners of the components are bevelled to 45 degrees and polished by hand during chamfering. The sharp angles of the inner corners are particularly difficult to finish, which demands an enormous amount of finesse from experts.

Black polishing is one of the most complex types of polishing, in which the polished surface has a reflection that appears completely black to the eye. To achieve this, the part is treated on a pewter plate with special polishing agents of which the grain size gradually decreases – until scratches become invisible even with the aid of a magnifying glass. Since this technique is particularly demanding and complex, the processing of a single piece can last several days.

Placement: Edges of the movement components

This type of finishing involves grinding a bevel at an exact 45-degree angle between the surface and the corners of the movement parts, which are then polished. This extremely time-consuming technique is rarely manually taught today and is performed by machine in some workshops, for example, by Audemars Piguet. 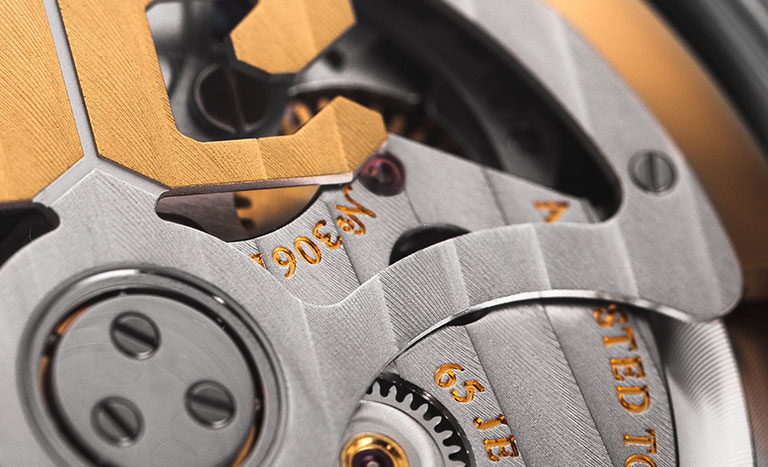 
Engravings and other techniques characteristic to Glashütte

Engraving is performed after grinding and polishing, which gives each watch its own character. Each watchmaker has their own unique signature, which is different from those of the others. This allows you to determine later on which watch was engraved by which finisher. One of Glashütte's specialities are engraved balance cocks and bridges, which are finished with a flat engraving. Here, a chasing-tool is used to engrave the pattern, which consists of enticing curved lines and floral patterns, into the metal by hand. At Nomos Glashütte, all balance cocks are marked with the words "Mit Liebe in Glashütte gefertigt" – "Made with love in Glashütte" in English.

A special form of engraving is "guilloché" (also known as engine-turning), in which uniform patterns or ornaments are applied to the dial or the case of a watch. The execution of this finishing technique requires particularly close attention and enormous dexterity. Even the smallest mistake can ruin all the work previously done, and the engraving process has to be started all over again. As a general rule, the more complex the pattern, the longer the engine-turning process takes. While guilloché was once widely used, today it has almost become a forgotten art and is used almost exclusively for high-end watches. 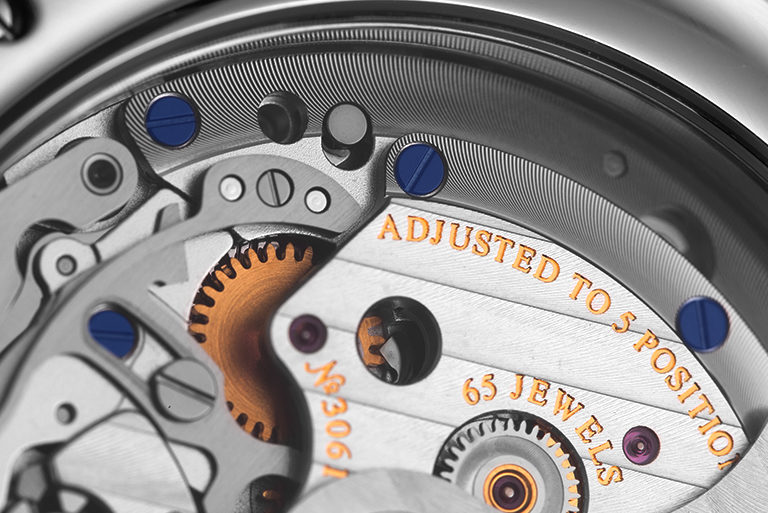 
In Glashütte’s workshops, these are not only polished but also blued. To do this, the steel screws are heated to about 290 degrees Celsius, after which a bond is formed between oxygen and the iron in the metal. Visually, this can be seen in the form of a thin layer of magnetite, which gives the screws a blue colour and protects them from corrosion. This process is also called tempering. In addition, the blued screws in a watch movement can also be used to identify whether it is an original watch or a fake. In reproductions, the screws are often only painted and the difference to actual blued screws can be clearly seen.