There are some topics that are so specific that they are rarely mentioned even in the watch industry. We would like to put the spotlight on one of these topics: resonance watches. The principle of resonance is fundamental to watches and provides the basis for a watch to work consistently. However, resonance watches themselves are still a rarity today.


The history of resonance watches

The phenomenon of resonance and pendulum clocks

Resonance watches are a relatively new trend in Haute Horlogerie. The principle, however, goes back to clocks with pendulums. In the 17th century, Christiaan Huygens, a Dutch natural scientist and inventor of the pendulum clock, noticed that two pendulums will always swing in exactly opposite directions within half an hour, regardless of their initial position. At that time, however, Huygens did not have the mathematical means to record this finding or to study the phenomenon of resonance more closely.

It was only in the 19th century that one of the most influential watchmakers, Abraham-Louis Breguet, began to systematically make use of resonance. By always oscillating the pendulums in the opposite direction, one pendulum corrected the inaccuracies of the other, thus increasing the accuracy of the clock. When the two pendulums move in opposite directions, this movement is called out of phase. In the 18th century, Antide Janvier, a French watchmaker who became famous for his complications, had already begun experimenting with pendulums striking in phase. He made two different movements with two balance wheels and attached them to the same device. As he correctly surmised, the pendulums absorbed the mutual energy loss and oscillated at the same frequency. 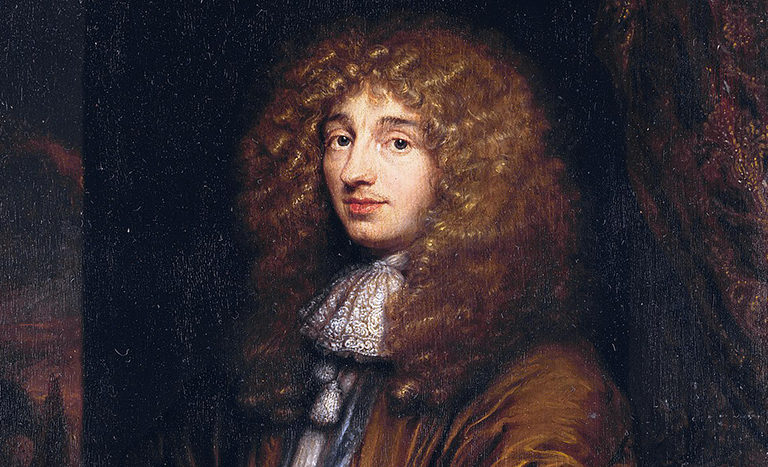 
How do resonance watches work?

Understanding resonance watches requires a certain affinity to physics. This is sometimes one reason why even today they are only produced sporadically.

When we speak of resonance, we are talking primarily about the physical transfer of energy through vibrations. Graphically, these are usually represented in waves – with a crest, reference value and trough. The energy potential is at its greatest at the crest. After a crest, it stops growing and returns to the reference value where the wave began. This is where the vibrations important for resonance are generated. Waves differ in amplitude and phase. When two waves meet, they always react in one of these four ways: constructive interference, destructive interference, superposition, and reflection. However, only constructive interference and reflection are important for resonance and will be discussed in more detail here.

In practice, you can observe this when pushing a swing. When a swing moves, the amplitude decreases progressively until the swing finally stops again. However, if the swing is pushed regularly, the amplitude can be kept the same or even increased. This is how constructive interference is being applied to the swing.

The magic of reflection effects

The fundamental resonance of a watch can be described by means of constructive interference. However, it does not yet explain why two pendulums swing in phase or out of phase and consequently increase the accuracy of the timepiece. This is where reflection comes into play.

Most modern resonance watches work with two movements, which have their own balance wheel and hairspring. As explained earlier, each of these movements has its own resonance. We will now explain how resonance influences other resonant systems via reflection.

To simplify this principle, one can imagine a stretched rope tied to a post, which is swung once. The rope forms a wave crest that slides to the end of the rope. However, this does not immediately disappear at the end. Once the end of the rope is reached and the rope hits the post, the recoil creates a short wave trough that drifts back in the initial direction before flattening and the rope comes to rest. This recoil is an example of the reflection of a single wave at a fixed end.

Naturally, there is also reflection at a loose end. For this, imagine a rope being held by two people with one at each end. Now, both sides start to swing the rope. The reflection takes place at the end of the rope. If both simply stop, no one will be thrown off balance by the wave's momentum. On the contrary: one of the individuals will absorb some energy from the wave before it is reflected back to the partner.

Since no more than three models have been designed in recent decades, it is important to note that a resonance watch is not designed casually, but requires years of preparation and research. This is probably the source of the fascination for this type of watch. In contrast to other types of watches such as the tourbillon, there are hardly any trendsetters or established methods for resonance watches. With all three of these models, the question was posed as how to make the watch sound best – but a different approach was developed for each watch.

As early as 1983, François-Paul Journe tried his hand at a pocket-sized resonance watch. The first attempt failed, but his ambition was awakened. It would take about 15 years of research and development before he was able to launch his Chronomètre à Résonance in 2000: the first resonance wristwatch. 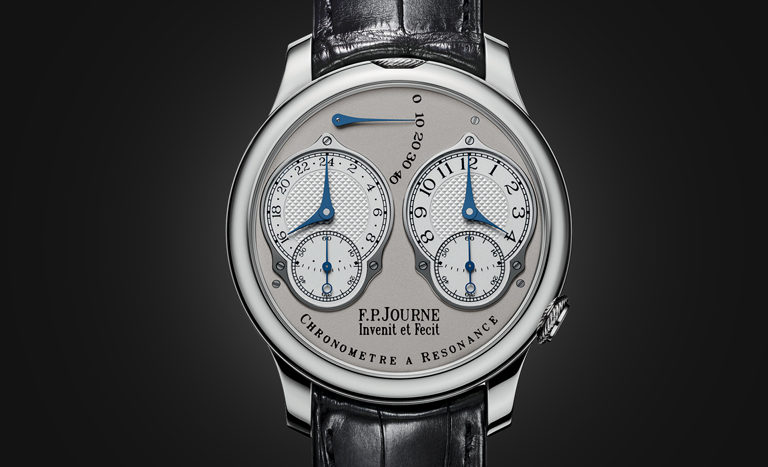 
Since then the model has already had a remarkable history. From 2000 to 2004, the movement was still produced in brass before switching to rose gold. In 2008, the symmetrical dial was discontinued and the exclusive Black Label Edition was launched. This model is only available exclusively in the nine boutiques worldwide. Only those who already own an F.P. Journe can order a Black Label. However, each boutique may not produce more than two Black Label watches per year. A limited special edition from 2019 celebrates the 20th anniversary of the watch. After that, it is planned to discontinue the series, which will guarantee the value of the model will remain stable.

Journe solved the resonance question technically by building two balances very close together on the same main plate. The caliber 1499 is equipped with separate gear trains. But since the vibration has to travel through the whole main plate, the energy transfer is so low that the resonance effect is very minimal. It therefore takes ten minutes before the balance wheels move in phase. The movements must also be adjusted to within five seconds of each other every day to ensure that the balances oscillate optimally.

Beat Haldimann also studied the resonance watch in 2005, but chose a completely new approach. He realized that the energy in Journes' approach took too long to travel through the metal of the main plate and so he decided to have the balance wheels fly over the dial in a tourbillon. However, this also meant that he could not rely on the effect of reflection. His solution was a spring that connected the two balance wheels, thus jointly driving one movement. In practice, this leads to a very direct transfer of energy. The watch’s frequency is adjusted here by slightly changing the length of the spring through the push and pull of the balance wheels. 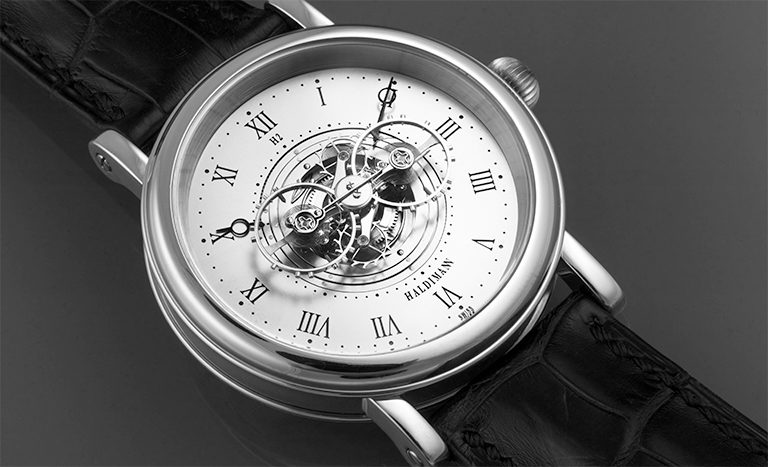 In 2016, Armin Strom attempted a symbiosis of F. P. Journe's and Beat Haldimann's approaches. Like F. P. Journe, the Mirrored Force Resonance has two wheels, but makes them run in opposing directions. Like Haldimann, they are also connected by a spring, which Armin Strom developed exclusively by himself. Its shape is so complex that it took Claude Geisler, Armin Strom's technical director, two years to design it. It is longer and stronger than Haldimann's spring and is rigidly mounted at the end of production.

This clutch spring is constructed in such a way that it has two floating spiral block carriers, which are about one third from each end of the spring. Spiral blocks are the outer mounts of the spiral springs that are connected to these holders. The balance wheels' hairsprings transfer vibration via the clutch spring until they oscillate 180° in antiphase. This design ensures that the clutch spring oscillates on its own, thereby compensating the balance wheels even more quickly and precisely. Unlike the other two models, the two movements do not need to be adjusted to within five seconds every day in order to oscillate. 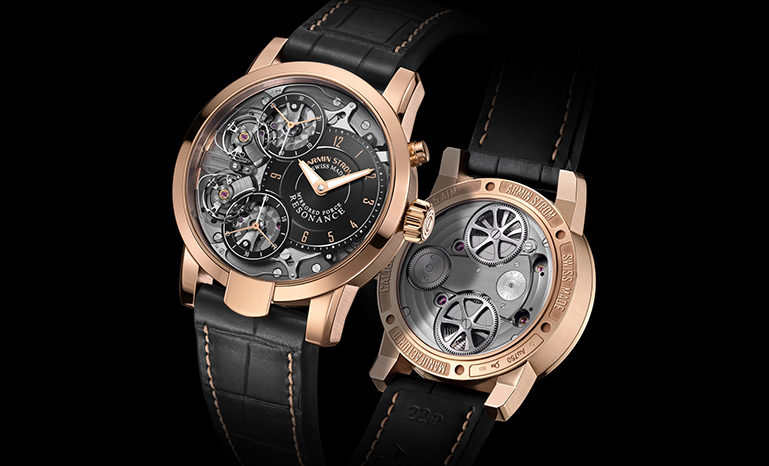 
The future of resonance watches

It is rather unlikely that the resonance watch will ever grow beyond its exotic status. The design of these models takes too long and it is too difficult to bring the topic of resonance to watch wearers. It is likely to remain forever a topic for enthusiasts who appreciate the technology and planning that goes into such models, and who are also willing to maintain the watches accordingly and wind them every day.