At first glance, no watch part seems to be easier to explain than the dial. After all, its function is primarily for many "only" the indication of time. But what is and what is not written on a dial is subject to strict criteria such as the need not to display too much and at the same time not too little. For example, a common dial has indices and the brand name or logo of the watch manufacturer. Complications such as a date display, small seconds or the totalizers of a chronograph always depend on the specifications of the respective calibre.

Furthermore, certain dials from brands like Rolex – and in particular models such as the Rolex Daytona – have become necessary additions to a complete watch collection. But what makes a good watch dial? Let's take a closer look at one of the most basic components of a wristwatch: the watch dial.


The elements on a dial

Naturally, the primary purpose of the dial is to display the time. Unlike a digital watch, which in most cases shows numbers on its display, analogue watches display the time using watch hands. Additionally, many watch enthusiasts place value on a number of supplementary functions on their timepieces beyond merely indicating the time. Small auxiliary hands or dials are usually used to display these additional features. These are integrated into the main dial as sub-dials. In the case of a chronograph, these are known as totalizers. 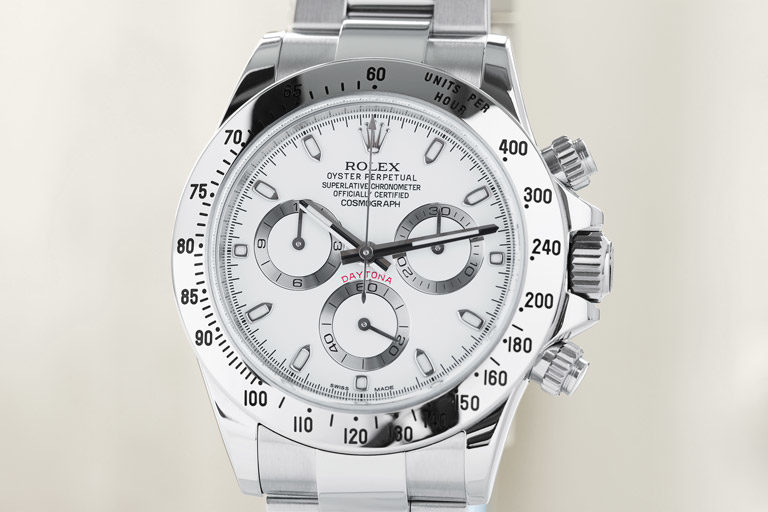 
Normally, dials are divided into equal sections by means of indices and numerals. However, many manufacturers use dials that do not have any hour, minute or second markers. There are basically no limits to the design of dials.

The trend for brands to print only the manufacturer's name on the dial is the result of decades of historical development. In the past, dials were additionally marked with the name of the concessionaire because jewellers like Tiffany & Co. were more meaningful to the general public at that time than manufacturer names like "Rolex" or "Patek Philippe". However, as the brands gained in popularity and prestige, this was increasingly frowned upon, making the Tiffany dials coveted collector's items.


Which types of dial designs are there?

In general, the design of the dial usually depends on the watch type. A pilot's watch such as the Breitling Navitimer, for example, with its tachymeter, is more finely and closely graduated than the dial of a diver's watch such as the Rolex Submariner, which emphasizes legibility through its pointed, broad indices and fan-shaped graduation of the minutes. The following are a few of the most common dial designs: 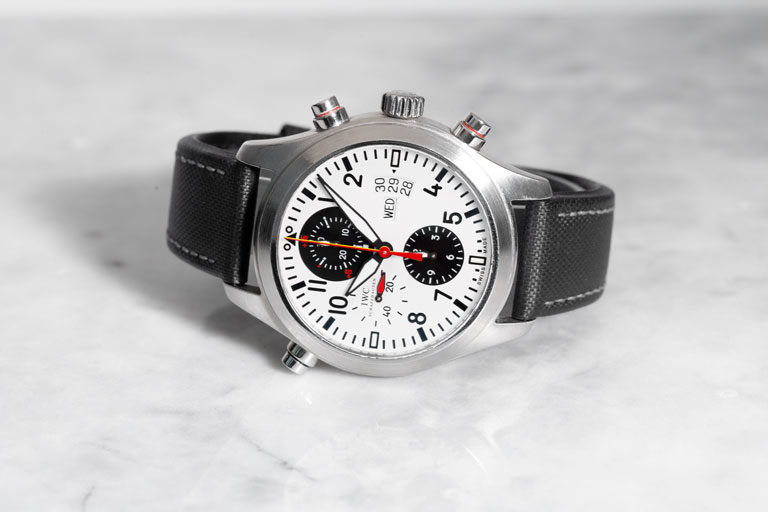 From blanks to finished dials

The production of the dial begins with a blank, which is usually punched out of nickel silver, brass or bronze. Materials such as silver and gold are often used for dials as well. Recesses for the indices, hands and other indicators such as date windows or totalizers are milled by machine. After cleaning, "feet" are attached to the dial, which later secure it to the movement and ensure its exact positioning. The dial is then polished and cleaned again. This is when the decorating and finishing process begins, which will be discussed in more detail later. The dial gets its colour from galvanization. Depending on the desired intensity of colour, the dial is fired for one to two hours. The colour results from the raw material of the blanks. 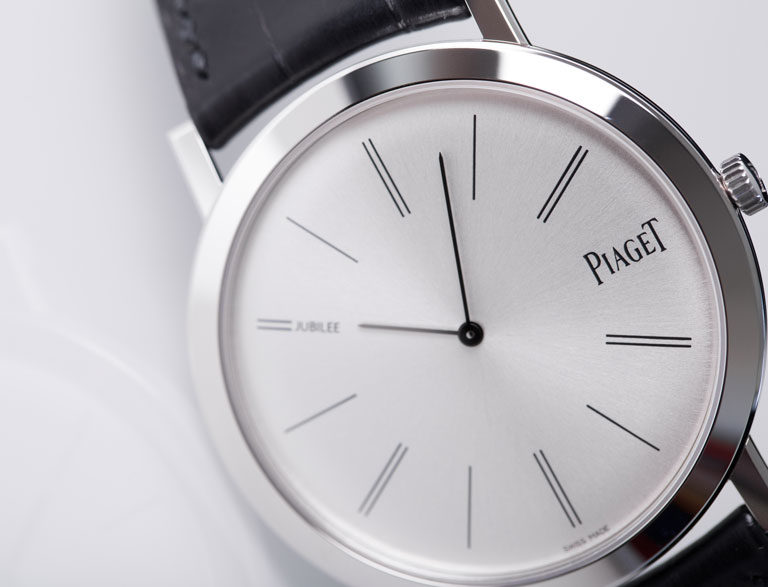 
After galvanization, the dial goes to print. For this process, pad printing is most commonly used, which is particularly remarkable for its delicacy and precision. The pad is a balloon-shaped, soft cylinder that takes up ink by means of an engraved stencil which is then pressed directly onto the dial and transfers the ink to it. Some manufacturers still paint their dials by hand, which is a process that often takes months. Many other manufacturing processes, such as setting the indices and numerals, are often done manually.

Aside from the classic materials listed above, such as silver or brass, other more exotic dial materials have become gained acceptance in Haute Horlogerie. Three of the most popular variations are:

Watch brands such as Corum began producing dials made of meteorite rock back in the 1980s and Rolex launched its first special edition watch featuring meteorite in 1999. The raw materials used for this originate from the Gibeon meteorite in Namibia and the Muonionalusta meteorite in Sweden, which are particularly suitable for decorative purposes due to their high nickel and iron content. What is particularly special about the meteorite is that the metal is not evenly distributed, giving each dial its own unique look. In the meantime, the Gibeon meteorite is protected by Namibian law and may no longer be commercially mined. However, Rolex has been able to build up a stock of the meteorite rock, which is why these extremely rare dials can still be made. In 2019, for example, the Rolex GMT-Master II 126719BLRO "Pepsi" made its debut with a dial made of meteorite.

Enamel is not the raw material itself, but a process so complex and arduous that enamelled dials are an art in their own right. Many manufacturers therefore only lacquer their watches. However, a genuine enamel dial immediately catches the eye with its inimitable shine and creamy texture. Today, only one company still performs the enamelling process. All of the enamelled dials for Patek Philippe, A. Lange & Söhne and Ulysse Nardin are produced by the Swiss company Donze Cadran. Enamel is a fused glass that is applied to the dial a number of times. There are various techniques that result in producing different textures. "Grand Feu", the repeated enamelling of a dial with oxides, is the most common technique.

Unfortunately, the most beautiful dials are also among the most fragile. Mother-of-pearl is a material that can be found inside mollusc shells. Separating this layer from the shell is a particular challenge, as it is extremely susceptible to breakage. The raw material is made to a thickness of about 0.2 mm and then glued to a disc from which the dial blanks are cut. Afterwards, these are processed by hand with the utmost care and then polished and decorated. Mother-of-pearl dials are available in a wide range of colours and are captivating with their delicate lustre. In particular, pastel shades are often used for ladies' watches.

Aside from materials, dials can also vary widely in their decorations. Manufacturers attach great importance to this aspect, as it emphasizes the craftsmanship of the master watchmakers and allows them to distinguish themselves from other brands. Let's have a look at the two most frequently used techniques for the decoration of dials. A few companies such as Glashütte Original have even developed their own refinement techniques.

A skeleton watch provides a direct glimpse into the movement of a watch. Although skeleton watches are now also made mechanically, we will focus on watches skeletonized by hand as a technique for decoration. 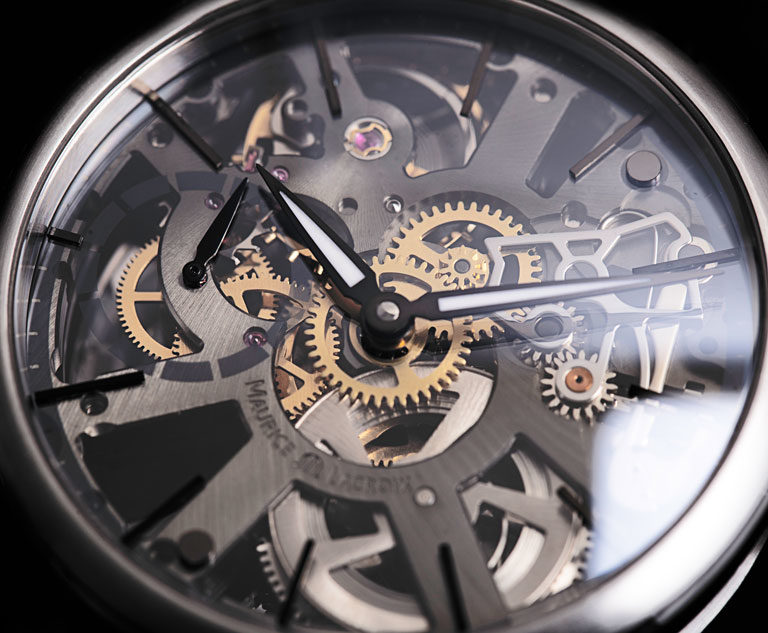 
The term itself has certainly changed over time. In the original sense, skeletonization is the modification of the calibre by removing unnecessary metal from the plate and bridge. This process pushes the limits of stability, leaving only a skeleton of the movement behind. Modern skeleton watches are often not a whole movement in their origin, but are assembled directly from the skeletonized individual parts. One often hears the term "open-worked" to describe this method. A few smaller brands like Armin Strom, Freret Roy and Roger Dubuis were able to make a name for themselves through skeletonization. Alternatively, brands such as Hublot also produce transparent sapphire crystal dials that allow the wearer to see the entire movement.

Guilloché work describes the engraving of fine patterns with intersecting lines, which are particularly popular for silver and gold dials. As with skeletonizing, the process can be done either by machine or by hand. The difficulty in guilloché engraving is primarily a logistical one. The machines used for manual guilloché work are sometimes up to 200 years old and occupy the space of an entire table. The addition of the necessary pressure and the turning of the dial is done by hand. Machine and man need to work in perfect harmony in order to achieve the ideal result.

As much as it is the calibre that gives a watch life, a dial gives a face to a watch. The dial is the figurehead of a watch and shows immediately what type of watch it is. Moreover, a timepiece that may accompany you for a lifetime is also chosen partly because of its dial. That is reason enough to pay a little more attention to the dial and its many details the next time you look at your wrist.