It is a paradox that the most important part of a watch, the movement, is located under the dial and a layer of glass. With its exposed position, the watch crystal comes into direct contact with all the environmental elements to which watch owners are regularly exposed. Keep reading to learn more about the watch glass that so reliably protects the precious interior of your wristwatch.

The history of the watch glass

From spring covers to sapphire crystal

When pocket watches were still predominantly in use, a spring cover served as protection for the watch crystal and dial. These pocket watches with a lid were also called savonnette watches. However, as wristwatches became more and more popular, not only did the pocket watch gradually disappear from everyday use; the spring cover did too. The watch now rested on the wrist, where it could be read much more comfortably, but was also no longer so well protected. Since wristwatches at that time always had the function of a tool, they had to be adapted to the conditions of their carriers.

In addition to the everyday demands on a watch, watchmakers were also confronted with the difficulty that reliable watch glass was often created at the expense of readability. For this reason, research was and still is being carried out to develop a secure yet highly clear watch crystal. 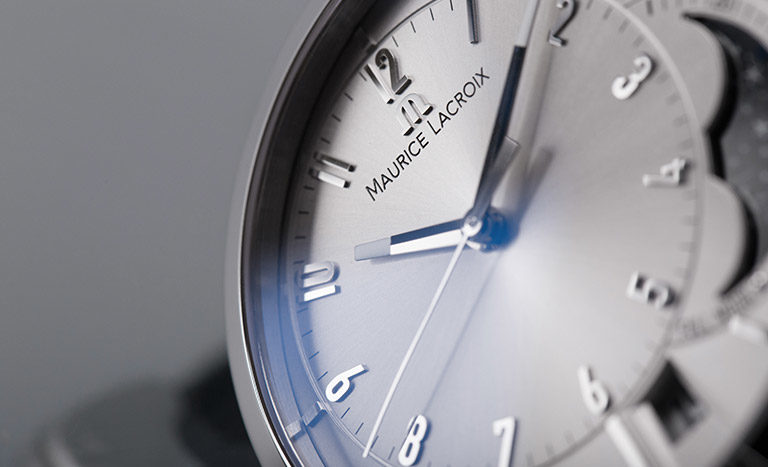 
Which types of watch crystals are there?

In the following, we will introduce you to the most important and most common types of watch crystals. The material used today for wristwatches can generally be divided into three different groups: mineral crystals, plastic crystals and sapphire crystals.

From minerals to artificial glass

The first watch crystals were made of untempered mineral glass, similar to the glass used in windows. However, this made the watches prone to shattering and there was always the risk that the fragments could damage the dial or even the movement if the crystal broke.

At the beginning of the 1930s, plastic glass, also known as hesalite or acrylic glass, came onto the market. Plastic glass is made of polymethyl methacrylate (PMMA). This alternative to mineral glass was considered an innovation and was exclusive at the time for that very reason. For example, Panerai used acrylic glass for its Radiomir watch models, which were designed for divers in the Italian Navy. In addition to increased shatter resistance, good legibility underwater was of paramount importance for divers. However, as PMMA is osmotic to a low degree, even the smallest amounts of water can penetrate the watch through the glass. In divers' watches, this was compensated for with reinforced crystals. In reinforced watches, the watch crystals are fixed by a metal ring, which also prevents the crystal from shrinking or deforming under pressure and heat. Omega also relied on hesalite glass for its iconic Speedmaster, which was the first watch to fly to the moon due to its high shock resistance.

Because of its low density, plastic crystal can easily be scratched. Since it can also be polished very well, this does not necessarily mean that this is a disadvantage, but it can be regarded as a minor flaw. The dials of luxury watches with plastic crystal can in addition yellow with time or if exposed to prolonged UV radiation. However, for some watch enthusiasts, this can be a reason to buy a certain luxury watch, with this particular effect leading to a high level of interest for vintage Rolex models.

While mineral glass used to be tempered by heat in the past, a process was introduced in the 1970s to harden the glass in a salt bath. This made it easier to distribute stress on the material; even watch crystals only 1 mm thick became extremely resistant surfaces. Mineral glass can also be further refined by adding aluminum oxide and boron oxide, significantly improving its susceptibility to scratches compared to plastic crystals. Some manufacturers such as Seiko refer to this as Hardlex crystal. However, once scratches have been made, they cannot be polished as easily as with plastic watch crystal. 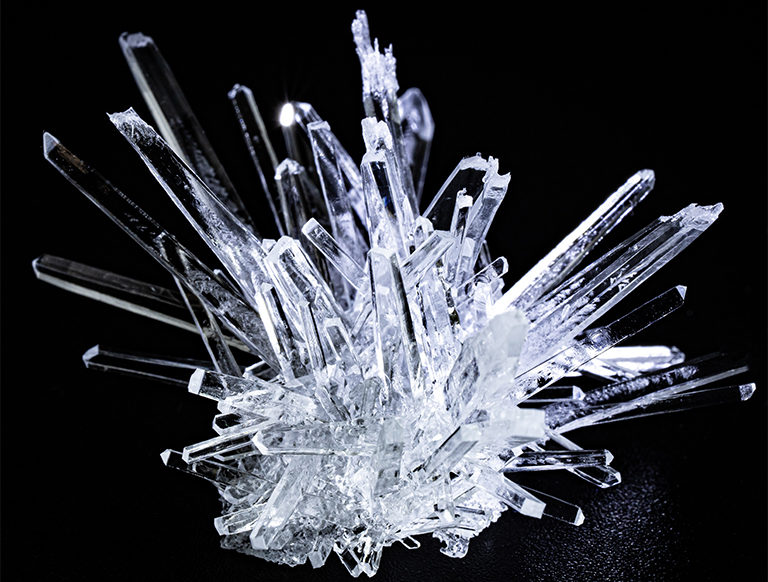 Hardened mineral glass reaches a Vickers value of 400, which describes the hardness of materials. In this hardness test, the optical impression is measured after a load with a weight. Since this test is easier to perform than other hardness tests, the Vickers hardness number has become the generally accepted value for hardness. Hardened mineral crystal replaced plastic crystal over time due to its greater resistance to breakage and its more valuable appearance. Alarm clocks are the only area in which plastic watch crystals continue to be used, regardless of the price segment.

Sapphire crystal: A type of glass that is not glass

The longer a watch with mineral crystal was worn, the more it became visible and tactile. Sometimes the dials under heavily scratched watch crystal became almost illegible over time because the deep grooves could not be burnished. If you want to sell your used luxury timepiece, this can make things particularly difficult. 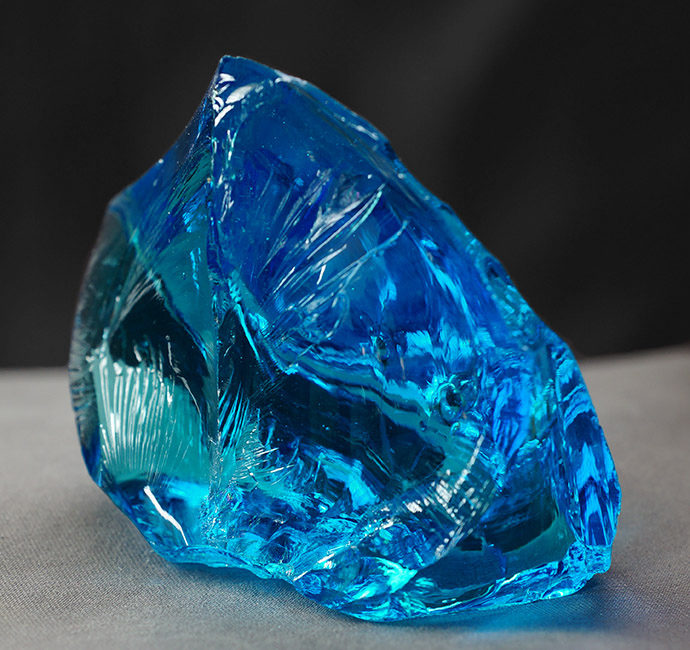 The synthetic production of sapphires using the Verneuil process has provided a remedy. This produces pear-shaped crystals which are then cut, polished and fitted to the appropriate size for the watch crystals. Sapphire glass has a crystalline structure, not an amorphous structure. Because the production process is complex and the raw materials required for sapphire glass are expensive, watch crystals made of this material are found in luxury watches in the upper price segment, where it has become standard. Only diamonds are able to damage their surface. Despite this, watches with sapphire crystal are often sent for refurbishment because of scratches – although these marks are merely the remains of softer materials and can often be removed without difficulty using an eraser. The only drawback is the increased reflection of light from sapphire crystal, which can cause annoying reflections. However, this can be often compensated for with special coatings.


The characteristics of various watch crystals


How to test the quality of the watch glass

If you have purchased a secondhand watch or even a vintage model, it may be unclear what quality the crystal above the dial has, but if you gently tap the glass with your fingernail, you will be able to hear the difference between various watch crystals clearly. With high-quality watch glass, the sound is a muffled, deep tone. With low-quality crystal and models, tapping on the crystal makes a rattling and clinking sound.

You can also perform a visual test. Simply place a drop of water on the watch crystal and watch it run down the crystal. If it runs down slowly, the watch has a high-quality sapphire crystal. If the drop falls quickly, it is most likely that a more inexpensive mineral crystal is covering your watch. 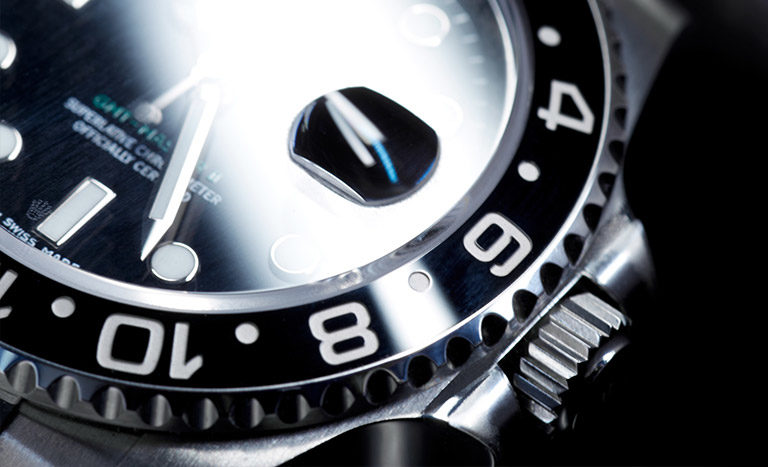 
Is the crystal a deciding factor when purchasing a watch?

As important as the watch crystal is for the protection of the dial, it is not a decisive factor when purchasing a watch. The blows that cause hardened mineral glass to break are generally not good for the inside of the watch either. So the watch crystal alone does not make your watch more robust, which is why you should generally attach importance to the all-round quality of a watch.

You should always choose a watch that you love, which seems like a rather simple tip. But, given the large number of factors involved in the decision for a particular watch, it is important to always be clear about what you like or dislike about watch models. This way, you are guaranteed to choose the right watch in the end. The sheer range of preferences influence which brand or watch is most suited for purchase. A model with plastic crystal, for example, can have a special appeal to watch collectors due to its patina because – for many people – the appeal of collecting watches lies not in the material nature of a watch, but in the story they tell. On the other hand, an unimpeded and clear view of the dial through the watch crystal is what we most often expect from a watch.