GMT watches were originally developed for aviation in order to allow pilots to read two time zones from the dial of their watch with a single glance. From its beginnings as an assistive tool for pilots and frequent fliers to its current status as a trendsetter with iconic designs, the GMT watch has had an eventful history.

What is a GMT watch?

A GMT watch is commonly defined as a watch with a second time zone. In addition to the local time, the wearer can also set and view the time in another time zone. The abbreviation GMT stands for Greenwich Mean Time, which used to be considered the official world time. Initially, the GMT hand was linked to the hour hand, but the function of the watches became much simpler in the years that followed. 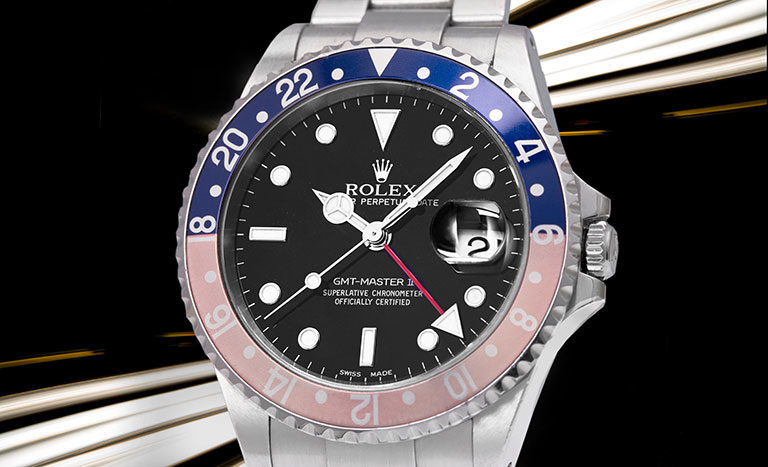 The history of GMT time

To understand what GMT time is, it is important to first understand the concept of time zones themselves. For many centuries, every location had its own local time, which was based on the sun. Advances in technology, such as the introduction of railroads and the telegraph, have led to the demand for universal time zones – i.e. geographic zones in which there is a uniform concept of time.

Due to pressure from the railways, the USA and Canada decided to divide the continent into four time zones. One zone was the equivalent of one hour. In the German Empire, each country still had its own time, which was usually oriented on the respective capital. In 1893, the Time Act introduced Central European Time (CET) as the official time zone for the entire Empire.

The next step was introducing globally uniform time zones. These were measured using the prime meridian – a designated boundary that divides the earth into east and west hemispheres and from which geographical longitude can be read. However, the problem of arbitrariness arose, as the prime meridian has different ramifications from country to country, profession to profession and situation to situation.

At the International Meridian Conference of 1884, 25 countries came together and decided to establish the Greenwich meridian as the official zero meridian. In the end, only 24 countries officially voted, because France was dissatisfied that neither the Paris nor the Ferro meridian would be recognized and abstained from voting. The Greenwich meridian was then decided upon because of its prominent use in shipping.

The Greenwich Meridian crosses the observatory in Greenwich. Greenwich Mean Time (GMT) was the official world time from 1884 to 1928, until it was replaced by Coordinated Universal Time (UTC) in 1972. However, clocks and electronic devices still use GMT time as the standard time when setting the hour.

Most early generation GMT watches, such as the Rolex GMT-Master Ref. 16700, Ref. 1675 and Ref. 16750, have two time zones. These are set by a secondary hand called the GMT hand or 24-hour hand. This is done by turning the 24-hour bezel until the GMT hand indicates the second time zone. 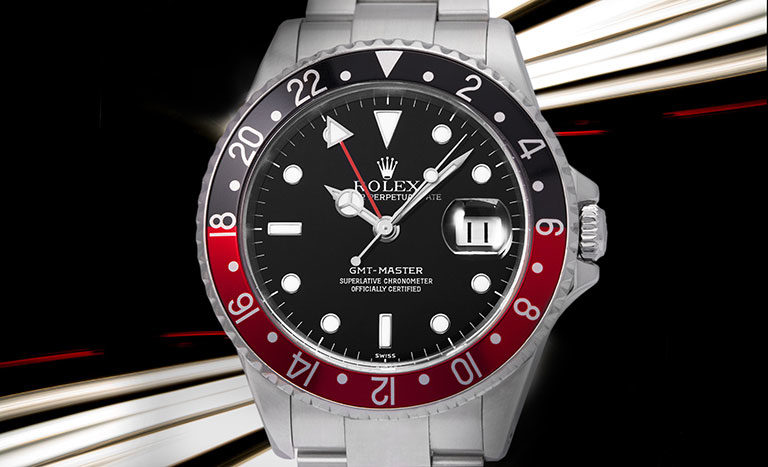 
To make it easier to distinguish between daytime (AM) and nighttime (PM), two-tone bezels were created. Due to their characteristic coloring, these bezels have become known by their nicknames such as “Pepsi” and “Coke” and can be found in the assortment of many watch manufacturers. One limitation of the early GMT models is that the GMT hand is firmly fixed to the hour hand. Therefore, you can only set and read two time zones.

The second generation of GMT watches provided a GMT hand independent of the hour hand, which made it much easier to set a watch with a GMT feature. This allowed more flexibility and more convenient operation, making this type of GMT watch the most popular model for frequent fliers to this day. However, this development brought a few minor technical differences.

For example, on the Rolex GMT-Master II launched in 1983 with the Caliber 3085, as well as on the Ref. 16710, the minute hand is set at the same time as the GMT hand. The local hour hand can then be adjusted. This technique was also copied by Omega with caliber 1128, which was used for example on the Seamaster 300M GMT. Another approach was to set the GMT hand independently of the minute and hour hands. This was adopted, for example, for early Hamilton Jazzmaster watches based on the ETA 2893-2 GMT caliber.


The trick to reading a third time zone

If you own a GMT watch with a 24-hour rotating bezel, you can even use it to display a third time zone. Originally, this was intended as a guide for the GMT hand. But with a little practice, you will quickly become accustomed to reading it even without the bezel. Once you have mastered this, you can move the bezel to use it to indicate a third time zone.

This is best explained using an example:

Let us assume that you are in Berlin (Germany) and have set the local time – your current time – to 10:30 AM. For the GMT time, you want to know the time in New York. Therefore, you should set the GMT hand six hours earlier to 4:30 AM. The bezel is at the zero position with the triangle at 12 o'clock. Now, if you want to display a third time zone, you must calculate the difference between your local time and the second reference time. Sounds complicated, but it is actually quite easy. Suppose you want to make a call to London. The time in London is one hour behind the time in Berlin, so you turn the bezel once to the left, counterclockwise. Now, you can read the time using the hour and minute hands, which are positioned at 9:30 AM. 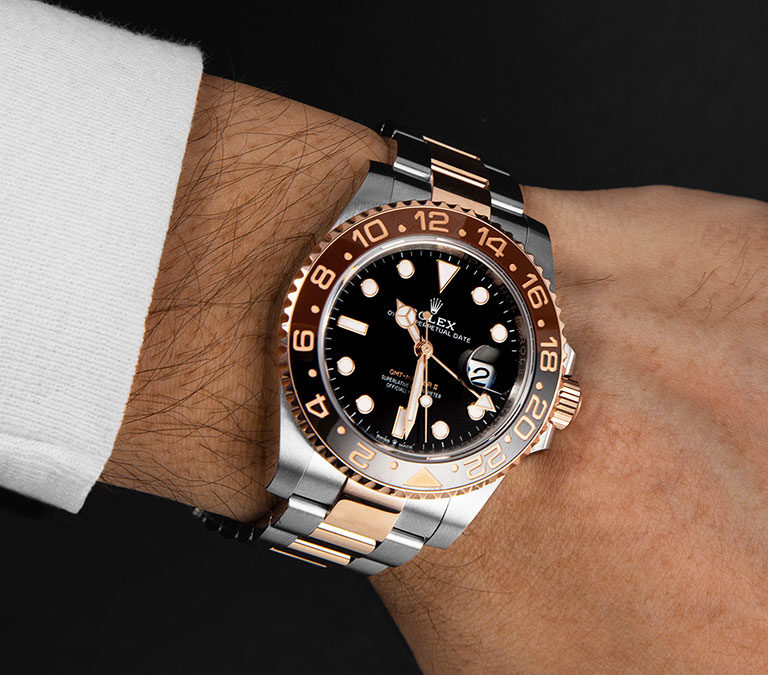 
The advantages of GMT watches

The most popular GMT watch models

The definitive model in the Rolex GMT-Master II collection is the Ref. 116710LN with its monochrome black bezel. Introduced in 2005, the SuperCase gives the model more volume and the classic black bezel makes this reference an everyday companion that is perfectly understated.

Omega also includes a beautiful GMT watch in its Seamaster collection – with striking orange accents and a dial that evokes the depths of the ocean with its bold blue color. The Omega 8605 caliber featuring a co-axial escapement ticks inside the Omega Planet Ocean 600M GMT, Ref. 232.30.44.22.03.001.

Breitling also offers its own collection of GMT watches, the Avenger II GMT, which captivates with its striking tabs and satin-finished stainless steel bezel. The color accents on the classically elegant Ref. A3239011.C35.107A are limited to one red GMT hand, making the dial much easier to read.

The Italian luxury brand Panerai gave one of its most famous series, the Luminor GMT, a second time zone at 9 o'clock. The massive, yet elegant character of Panerai and the world-famous crown protector are also included on the GMT models.

If a GMT watch is a little too sporty for you, or you prefer clear separation between time zone indicators, you might consider a dual time watch like the Audemars Piguet Royal Oak Dual Time. This has no bezel, but a separate totalizer that indicates a second time zone by means of a second hour hand. Dual Time watches are particularly impressive for their sophistication and clarity. Unlike newer GMT models, however, dual time watches do not offer the possibility of adding a third time zone due to the lack of a bezel, so that only two time zones can be displayed. 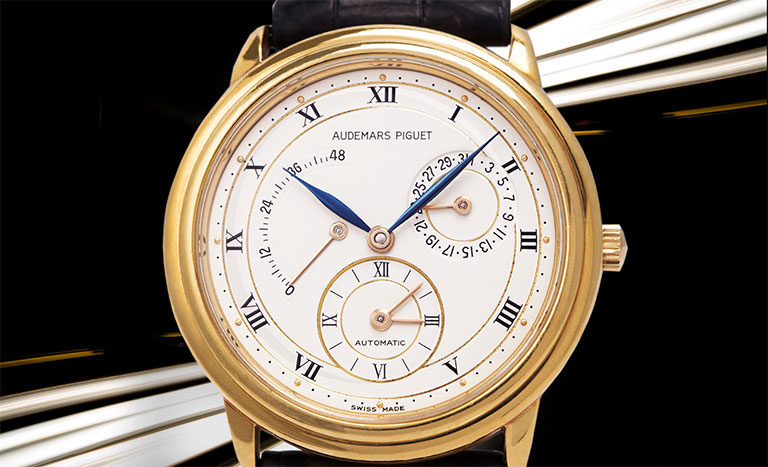 Developed by Louis Cottier in 1930, world time watches, such as the Frederique Constant Worldtimer, are today among the standards of Haute Horlogerie. The dial looks a bit confusing at first glance, but is in fact very easy to read. The inner bezel shows the time zones of 24 cities across the world. One level further inside a 24-hour bezel. To read the watch, synchronize the bezel with the city's time zone and the 24-hour bezel so that it matches the local time. As time passes, the 24-hour bezel will start rotating, so you can read the various time zones directly on the dial. 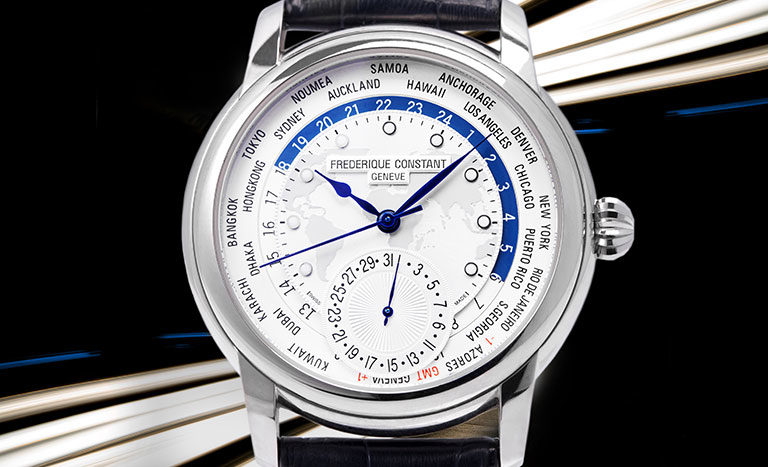 GPS watches like the Seiko Astron GPS Solar are another alternative to GMT watches. These watches are usually driven by a quartz movement, but thanks to modern technology they can connect to satellites and automatically change to your current time zone. So if you are reluctant to set your own GMT watch or find it too cumbersome, the self-synchronizing Astron GPS Solar is a great choice for you. 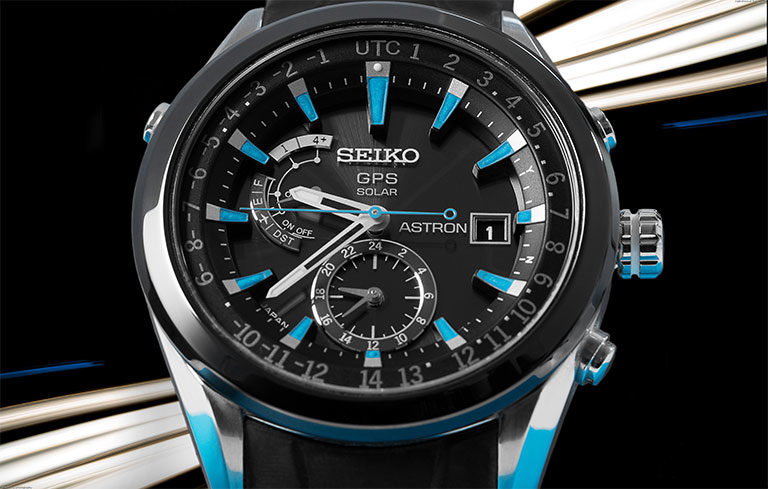