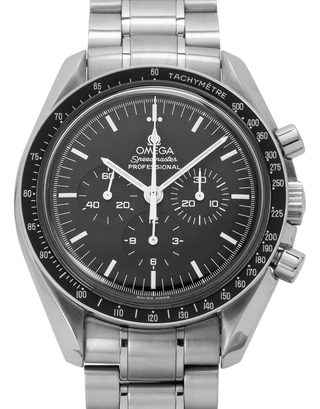 Customers Who Viewed This Omega Watch Also Viewed
Discover Omega
Omega Speedmaster Moonwatch
3570.50.00
The legacy of the Moonwatch: the Speedmaster 3570.50.00

A brief look back into the past


As a watch enthusiast, you probably know the story of the moon landing and already know that Armstrong had to leave his Speedmaster in the spaceship and that we can in fact thank Buzz Aldrin for the name of the Moonwatch. Even after the moon landing, this famous watch also witnessed other important events, among others, as part of the Apollo 13 mission. To this day, the Omega Speedmaster Moonwatch is mainly worn and held in high esteem for its historical heritage. A truly remarkable and special fact is that the Moonwatch has never been taken out of production since it was released. The original 105.012 and 145.012 models have been continuously developed and modernised since then. One of these more recent versions is the Omega 3570.50.00, which was produced from 1996 to 2014. However, it has since been replaced by the newer Ref. 311.30.42.30.01.005.

At first glance, the Ref. 3570.50.00 hardly differs from other models in the Speedmaster Moonwatch family. However, that is not the case: it won’t be long before you actually realise that it is a hand-wound Moonwatch. With a 42 mm case diameter, it is noticeably larger than the automatic Speedmaster Reduced and builds on the legacy of the Original Moonwatch with great dignity. The calibre of the Moonwatch was also updated with great care. The modern Speedmaster is equipped with Calibre 861, while the models before 1968 were still equipped with Calibre 321. The 3570.50.00 has the Calibre 1861, which, unlike the Calibre 861, is coated with rhodium to protect it from corrosion.

Of course, the 3570.50.00 also has the typical Moonwatch features such as the classic arrangement of the totalisers at 3, 6 and 9 o'clock and the black tachymeter scale on the bezel - but unfortunately we have to disappoint collectors at this point, because the Ref. 3570.50.00 bezel is in fact a “dot-across-90” version rather than a “dot-over-90” one. Furthermore, this model doesn’t have screw-in pushers or a date window. The 3570.50.00 is also equipped with the typical Speedmaster steel bracelet and is water-resistant up to 50 meters. Thus, nothing stands in the way of daily use, including washing your hands, showering and a short jump into the pool. However, the 3570.50.00 should not be worn in water for long periods or when diving to any significant depth.

In addition, the 3570.50.00, uses the same popular watch glass made of Hesalite as the original moon watch. The advantage of this plastic glass was that it did not break as easily in space as the regular choice of sapphire glass and was therefore used to protect the astronauts.

If you want to buy a Moonwatch Ref. 3570.50.00, it is worth having a look at the details of the individual Speedmaster models. So it isn’t too complicated, we have left out the special models in our table and only listed the regular Moonwatch models and prices regardless of their condition.


Looking at the higher prices you can see that the early models, which were produced during the period of the moon landing, are still in great demand today. However, prices for Ref. 3590.50.00 models that have been kept in good condition have remained stable. This makes an
What our customers say about us