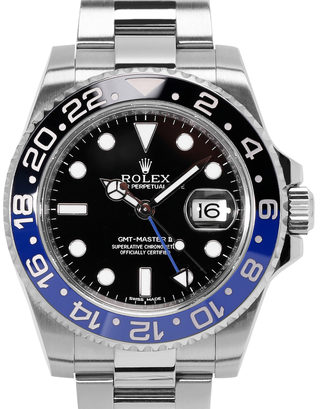 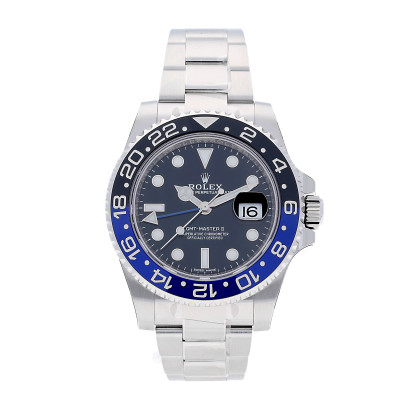 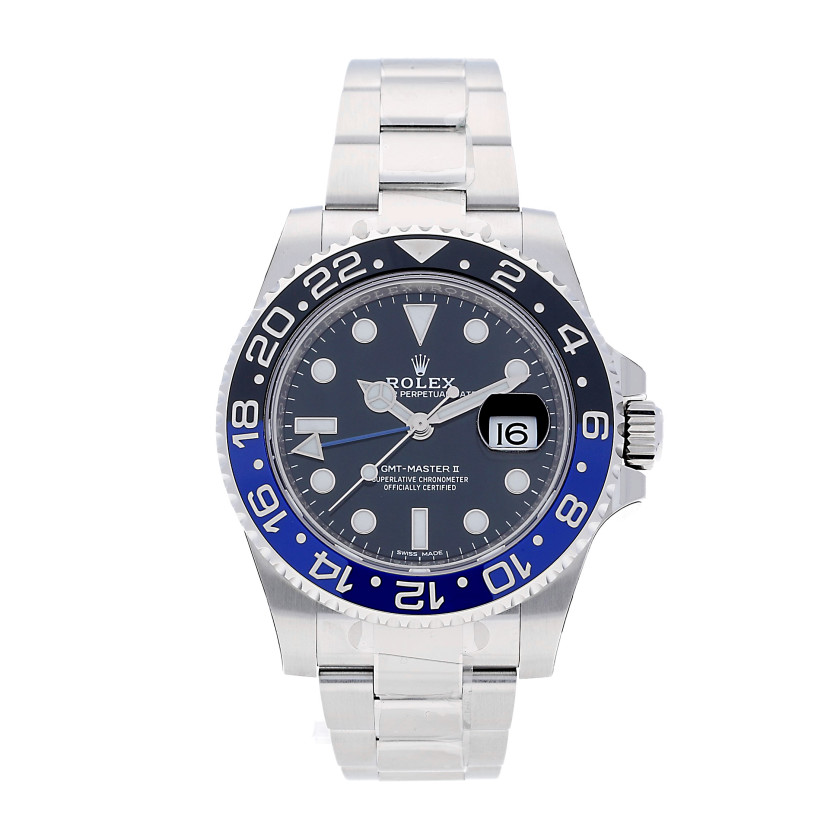 Buy a Rolex Batman: The GMT-Master II 116710BLNR with the striking bezel

The Rolex GMT-Master II 116710BLNR was quickly known as "Batman" due to its black and blue Cerachrom bezel. As a matter of fact, the combination of black and blue was new territory for Rolex. The division is quite logical, however, if one understands it as a way to differentiate between day and night hours as with the Coke and the Pepsi. If you feel insecure about buying a Rolex Batman 116710BLNR, we advise you to choose the more understated version with the ref. 116710LN.

But let's get a little deeper into detail and have a look at how Rolex mastered the sharp, flawless transitions of the bezel. The process is patented by Rolex, which is why the rough steps are known. However, the details will forever remain strictly confidential. What we know is the following: The bezel starts with blue, while the black is added later. To do this, the subsequent blue part of the bezel is covered, while the uncovered half is chemically treated. In a PVD process, the 24-hour graduation engraved into the bezel is covered with a fine layer of platinum, giving the bezel its shine and depth.

The transition between the two halves is highly precise and perfectly balanced. One of the most beautiful experiences you can have with the Rolex Batman is to see how the Batman adapts to different lighting conditions. Exposed to direct sunlight, the blue of the Batman shines in a bright neon, while in semi-shade it changes into a soft purple violet. In dim lighting, the entire bezel seems almost black.

New or pre-owned: The Rolex 116710BLNR Batman never lets you down

The GMT-Master II 116710BLNR (Batman) also convinces with its inner values. The watch is powered by an automatic movement with calibre 3186 and 31 bearing jewels as well as a power reserve of 48 hours. The accuracy is -2/+2 seconds per day. The GMT function activates the third clock hand, which can be used to set a second time zone. Compared to the 3185 calibre, which went into mass production in 1988, the 3186 is also equipped with a fast date mechanism and a parachrome spiral to protect it against shocks and temperature changes. Of course, the calibre is COSC certified as well. 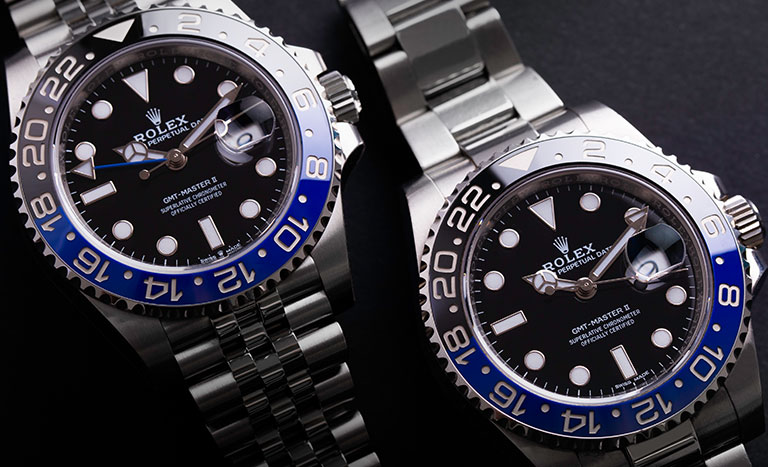 The new movement makes the Batman slightly thicker in size than the old GMT-Master models with the calibre 3185. The case is rather average with 40 mm, but gains in presence and compactness due to the Super Case. The Rolex 116710BLNR is best-suited as a daily watch, but its classic look also makes it appropriate for a business casual setting. Offered with an Oyster bracelet with Easy Link system, Rolex presented a new version of the BLNR equipped with its famous Jubilee bracelet at Baselworld 2019 - the GMT-Master II 126710BLNR.

Certified pre-owned 116710BLNR watches can already be found for a price from €12,000, while the new price is approx. €14,000. Alternatively, you can finance your favourite timepiece starting at 238 € per month.

Battle of the Rolex generations: Coke and Pepsi vs. Batman 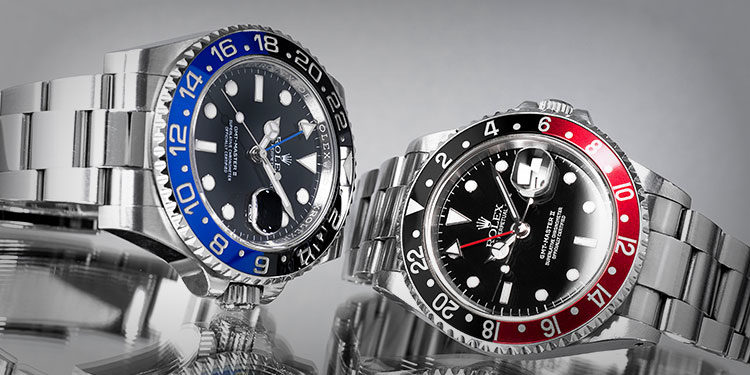 
Although the Batman is by far the most popular model of the new GMT-Master II models, its sister models don't really have to hide. The Submariner 116610LV is also called by the name "Hulk" because of the combination of green bezel and dial. It comes with the calibre 3135 and the perfectly polished Oyster bracelet. Like every good diver's watch, the Hulk has a bezel that can be rotated to one side and is water-resistant up to 300 meters. The price of the two models is roughly the same, although the Hulk shows clearly more collector potential. Well-preserved pre-owned models can already be obtained for a comparatively low price of €12,000, while the recommended retail price is about €14,000.

If the "Hulk" is too extravagant for you, you will be satisfied with the Submariner 16610LV "Kermit". With its black dial, it is the stylish, classic version with a pinch of more sportiness thanks to its green bezel. Like the Batman and the Hulk, it also comes with a Super Case and Maxi Dial, which makes it very present on the wrist. Special editions are not always cheap and the Kermit should be considered as a serious investment with a retail price of €13,000. Therefore, we offer you the possibility to finance a certified used Kermit for already 500€ per month.

About our Rolex GMT-Master II 116710BLNR