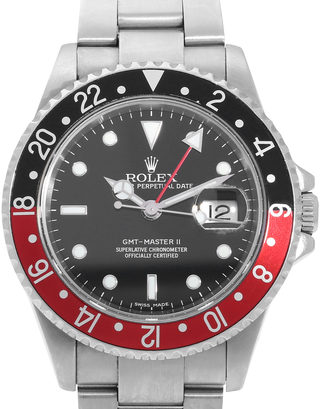 Loving Rolex is also accepting the fact that a certain kind of fan will turn every little thing into a new trend and obsession. A special example are the GMT-Master II 16710 models with the so-called Stick Dials, whose market value is based on a very small detail. The dials of the reference 16710 are called Stick Dials because the "II" in the written text "GMT-Master II" doesn't have the required serifs for Roman numerals and reads itself just as "ll". Another variant is called rectangular dial, where the lines are so far outside that they form a rectangle together with the serifs. However, there are no major differences in price between the two GMT-Master II 16710 variants.


Why does the Stick Dial cost more than other 16710 models?

Reports about Stick Dials go back to the Y series (2002/2003) and reach to the Z series (2006 / 2007), which marked the transition to the 116710 LN. They also come with the new calibre 3186 and without the Rolex engraving on the inside of the bezel. It is interesting to note that the Stick Dials are available with every bezel variant. Since the 116710 LN was introduced, the Stick Dials of the GMT-Master II 16710 have also disappeared, turning them into much sought-after collector's items.

However, the question remains whether the production of these coveted GMT-Master II 16710 dials, especially in combination with the calibre 3186, was just simply a mistake? Since Rolex does not comment on production numbers or aesthetic decisions in public, a feeling of uncertainty will always remain, but since the Explorer II also has the calibre 3186 during the same period, it can be assumed that Rolex deliberately tried out the new calibre in the old 16710. Does this automatically mean that all GMT-Master II 16710 Stick Dial models also feature the new calibre? Unfortunately not! As already mentioned above, Stick Dials have appeared since 2002, but unfortunately, they are not included in all used models. However, there is a simple method to determine whether the watch contains the calibre 3186 or 3185. Try the so-called wiggle test. If the red 24-hour hand moves only slightly when turning the hour hand, this indicates the new calibre 3186. However, if you want to be sure, you must open the bottom to read the calibre number.


The Stick Dial compared to other Rolex dials

If you would like to buy a Rolex Stick Dial, you will be particularly interested in its exceptional dial. However, there are a few more dials besides this one that may be worth a look. The prices vary depending on how far you go back in time. A pre-owned Rolex GMT-Master II 16710 Stick Dial, which was produced between 2002 and 2007, is available from €12,000 or the Rolex Submariner 6536 from 1957 is available from €33,000. Particularly used models with good maintenance can represent a valuable investment.

You may now be wondering what the difference is between the calibres 3185 and 3186, that collectors place such a high value (also in terms of pricing) on the newer 16710 Stick Dial models with the calibre 3186.

Both calibres are based on the calibre 3135 with changes in the date. The calibre 3135 is one of the 20th century's most solid movements and its successors are in no way inferior to it: With 31 jewels and 28,800 oscillations per hour, they operate precisely and reliably at all times. Both calibres have a semi-quickset function for the date, which means that the hour hand has to circle the dial to jump to the next day, but does so at intervals. The first small difference lies in the translation from crown to hour hand. In the calibre 3185, it jumps at 6-hour intervals, while in the calibre 3186, it jumps at 8-hour intervals. The second difference is that the 3186 calibre uses a Parachrom hairspring, while the 3185 movement still contains a Nivarox hairspring.