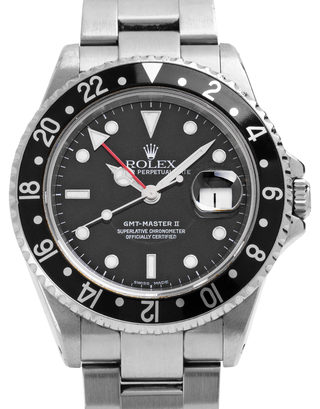 The Rolex 16710 Black Bezel is one of the most underestimated models of the GMT-Master II family. Instead of the sporty esprit like Pepsi and Coke, it focuses on a classic design and understatement. Sometimes only the story repeats itself. Also, in the first GMT-Master series with the reference 1650, Coke and Pepsi were launched before the all-black model, which became part of the family in 1970. This trend should change in 2007 with the update from Ref. 16710 to Ref. 116710 LN. Since the new Cerachrom bezel was not yet produced in two colours at that time, only the model with the black bezel was available at first.

What does the GMT in a Rolex GMT Master II actually mean?

As popular as the GMT Masters II series is, so little do most carriers know how to fully exploit its functions. This is a pity, because the GMT allows you to display up to three time zones at the same time, which can be quite useful in your profession.

Few know what GMT actually means: Time itself and especially the different time zones, have always been of immense importance. Initially, this was mainly for shipping, which used charts based on the true local time of the Royal Greenwich Observatory in London for astronomical navigation. At the International Meridian Conference in 1884, when an internationally binding zero meridian was defined, the already established Greenwich meridian was quickly chosen. In 1880 Great Britain already introduced Greenwich Mean Time as the legal standard time and, on this basis, this time was also used internationally when standardized times were required.

So, what are we talking about when we talk about GMT in general? Today, GMT is still used as a synonym for UTC (Coordinated Universal Time), which has officially defined international time zones since 1972. This equality is also due to the fact that many electronic devices still refer to GMT when the relevant local time is set.

How to use a Rolex GMT Master II

Advanced users can even display a third, alternative time zone by turning the bezel. Turn the bezel to the neutral position and then calculate how many hours are between the reference time and the desired third time zone. If the time is earlier, rotate the bezel counter clockwise the corresponding clicks. If the time is later, rotate the bezel clockwise the equivalent clicks. Now read the red 24-hour hand against the position of the bezel to get the appropriate time. The minutes are indicated by the minute clock hand.

Professional advice: You can also use your Rolex 16710 Black Bezel as a compass! The only requirement is that it is sunny or slightly cloudy. Make sure that the 24-hour clock hand is set to the correct time zone. Then hold the 24-hour hand in the direction of the sun while keeping the wrist as flat as possible. The 12:00 hour hand will now show you the north if you are in the northern hemisphere and the south if you are in the southern hemisphere.

What does a GMT Master II 16710 cost? - The Black Bezel compared to their sisters

You still can't decide which 16710 is THE right one for you? One thing they all have in common is that they all have the same reference (16710) and were produced from 1989 to 2007. In addition, they all have an aluminium bezel and the 3185 calibre, or the 3186 calibre in the models produced in 2007. The price of the Black Bezel is by far cheaper compared to the other models. Coke and Pepsi are on the same level, while the Stick Dial is a good choice for investment due to its rarity and high collection value. Since the differences between the other models are primarily in appearance, however, it is best to simply wear a model sample and see how it feels in your everyday life.