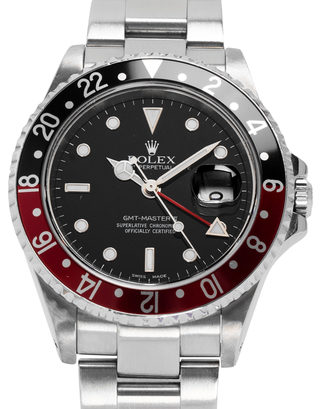 
If you are interested in buying a Rolex GMT-Master II 16710, you probably know one of its nicknames. The model comes with the reference 16710 as Rolex Coke, Pepsi, Stick Dial and with a black dial. Especially the history of the Coke is quite interesting.

The black and red Coke bezel made its debut already in 1983 on the Fat Lady (Ref. 16760), which was in production from 1983 to 1988, before it gave way to the reference number 16710. The Fat Lady was only available in one version (stainless steel case, Coke bezel and Oyster bracelet), therefore the 16710 brought more variation into the series. The model was available as a two-tone version or with the Pepsi bezel (blue and red). This model was produced from 1989 to 2007 before it was replaced by the 116710, which also meant the preliminary end of the Coke.

Through this historical connection, the Rolex Coke also experienced all the changes that took place during this period. In 1998 Rolex switched from radioactive Tritium to Luminova, before Superluminova was used from 2000 until now. This change can be seen on the dials as well. At the time tritium was used, it was labelled with T25, while Luminova was engraved with "Swiss" and Superluminova with "Swiss made". More technical details are given below.

The Rolex Coke not only went through the change from radioactive dials to Superluminova, it also went through all the small changes that slowly improved the GMT-Master II 16710 and helped to pave the way to the 116710. Since 2000 the Solid End Link System (SEL) was introduced and is still remains as the standard today. While the bridge units used to be hollow, they have now been filled in, which gives the bracelet more stability and reduces the risk of breakage. In 2002, the laser crown on the sapphire crystal was introduced in order to create another obstacle to conquer for counterfeiters. In 2003, cases were produced without the usual holes that allowed the holder of the watch to use a toothpick to press the springs that loosen the bezel. In 2007 the change to the calibre 3186 followed, which would also become standard for the 116710.

Apart from that, the Rolex Coke comes with all the old-school features that makes a vintage Rolex so popular. The case and the clock hands are still relatively slim and compact, while the bracelet still has the usual rattling and is not yet brought to perfection. The calibre 3185 replaces the calibre 3085, which was still used in the Fat Lady and was later replaced by the calibre 3186.

Here you can have an overview of some of the GMT-Master II models and their prices. Most models are no longer in stock, but you can find many certified pre-owned Rolex GMT II 16710 models at bargain prices in our online shop. For example, you can get a worn Rolex Coke starting at €10,000. A 16760 Fat Lady, on the other hand, already costs around €14,500 when used, but its high collector's value turns it into a good investment.

Invest in a Rolex Coke with Tiffany dial

Watch lovers should especially look for the Rolex Coke with a Tiffany dial. In the past, it was common that the corresponding jeweller was also depicted on the dial. Rolex was one of the first brands to break with this tradition and put their own name on the dial. However, still exceptions remain. Rolex's collaboration with Tiffany & Co is one of the best known and has a high collector's value thanks to its exclusivity and therefore represents a good investment.

In the 50s, Tiffany gave their own sold Rolex watches the common co-signature on the lower half of the dial. At that time this was still a common practice, but over the years it became more and more restricted, so that in the 80s only Cartier and Tiffany remained. Cartier soon withdrew. Tiffany continued this tradition until the 90s, which led to some tension with Rolex. But Tiffany did not give in until Rolex ended the relationship in 1993, reinforcing the collector status of these models.

In addition to the familiar dial, these models also come with a bold combination of the new voluminous case and a jubilee bracelet. Three small chain links in the middle of the bracelet form a finer chain in the middle, giving the bracelet an elegant flair. Due to the high-quality polish the watch looks almost as new.