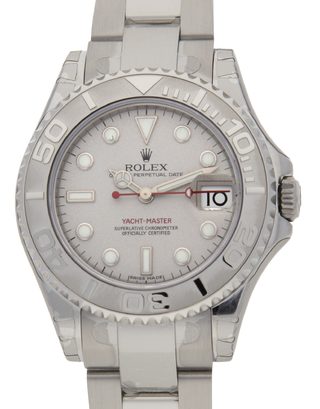 The history of the Yacht-Master began in 1992 with the Ref. 16628 with two smaller versions of this model following on in 1994. Rolex reused this formula in 1999, when the company released the Yacht-Master in Rolesium and again offered it in three different sizes: 40 mm for the men's models, 29 mm for the women's models and a 35 mm version for a happy medium. The latter was produced under the model reference Yacht-Master 168622. The design of the Ref. 168622 is based on the Submariner, but with the elegance of a Daytona. The Rolex 168622 was an instant success and enjoyed the same success as the Daytona did at first, for which some collectors waited years for on pre-order lists before they could hold the model in their own hands. Today, only one click separates you from buying a certified pre-owned Rolex 168622.

Visual and technical features of the 168622

Rolesium is the term introduced and patented by Rolex in 1932 for models that combine stainless steel and platinum. The dial and bezel of the Rolex 168622 are thus made of 950 platinum. The number 950 indicates that 95% of the metal is pure platinum. Not many people know that platinum is up to 30 times rarer than gold, which accounts for the high value of the Ref. 168622. If cared for properly, it lasts forever, which makes Rolesium models particularly suitable wedding gifts.

The sandblasted bezel of the Yacht-Master 168622 carries on to the dial, which adds to the depth and profile. The red second hand and the Yacht-Master lettering tastefully break up the monochrome look of the watch. In addition, the stainless steel case is sealed with a screw-in crown that guarantees water resistance up to 100 metres. The Rolex 168622 is driven by the in-house developed automatic movement with Calibre 2235.


Price comparison of the Rolex Yacht-Master 168622

One of the predecessors of the Rolex 168622 is the Ref. 68628 which impresses with a shiny yellow gold case and royal blue dial. The price difference between the models is thus primarily due to the material and the rarity of Ref. 68628. A new edition of the Yacht-Master is the Ref. 116622 which has been in production since 2012. It still features the Rolesium but has the new Calibre 3135. This model is also available in three different sizes (35 mm, 37 mm and 40 mm), with the 40 mm version being the most established on the market. The manufacturer’s price set by Rolex for the Ref. 116622 was €11,250. However, you will be able to find a pre-owned model for slightly cheaper. To give you a better overview, we have put together the key features and details of the Yacht-Master 168622 with the other two references in a table below.

* Terms and conditions apply
All prices include VAT. If differential taxation in accordance with §25a UStG is applicable the VAT will not be reported separately.
Watchmaster ICP GmbH | Charlottenstraße 60 | 10117 Berlin | Germany
© Watchmaster ICP GmbH
# b1517f5c4