Avant-garde outsider and innovative mastermind – no other brand is represented by its creator like Alain Silberstein. Discover an extraordinary range of products that is unparalleled.  More 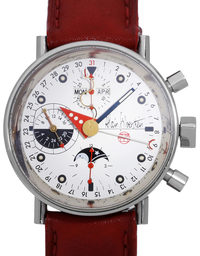 Buy or finance a watch by Alain Silberstein

Looking for a luxury watch from Alain Silberstein? Our online shop features new and vintage models, the latest collections, as well as certified second-hand Alain Silberstein, watches at affordable prices. All of our timepieces are individually examined and provided with a certificate of authenticity so that you can always feel secure in your purchase. Have you already found an Alain Silberstein watch? Pay easily and securely with a credit card or finance your timepiece over time by paying in instalments. Find out on our website which payment option suits you best and if you have any questions or suggestions, our friendly, qualified customer service is always ready to help you.


The best reasons to buy a watch by Alain Silberstein

How much does an Alain Silberstein watch cost?

Even after a mere three decades since their beginnings, few luxury watch brands are as closely associated with the philosophy and visions of their founders as in the case of Alain Silberstein. Silberstein began as an architect before moving from Paris to Besançon in the 1980s – both then and to-date a metropolis of French watchmaking. He was quickly overcome by nostalgia and began privately designing his first watches. Inspired by Swatch and the open-mindedness of the market to new fashion standards, Silberstein soon began trying increasingly daring designs. As his frustration with creative compromises he often had to make on commissions grew, he decided to launch his own watch brand with his wife in 1987.

His background combined with his iconic vision quickly made him an outsider and an enfant terrible. Shortly after its foundation, his brand focused on mechanical watches and deliberately opposed the luxury watch market, which – startled by the quartz crisis – had started to switch to quartz as well. However, Alain Silberstein was not alone with his philosophy, but became part of a movement that included Jean-Claude Biver of Blancpain, Gerd-Rüdiger Lang of Chronoswiss and Rolf Schnyder of Ulysse Nardin. Time would prove them right and soon celebrate them as an important part of the mechanical revival. While these brands attempted to bring earnestness back into Haute Horlogerie and launched a veritable boom in the field of complications, Silberstein rebelled in its own way by using primary colours and geometric details in striking positions. Silberstein wanted to be art for its wearers, but oriented itself more towards Bauhaus than the Baroque style. Alain Silberstein's watch designs met with a resounding reception on the market and have since polarized the world.

Silberstein was careful to always think locally and not globally. Wherever there was demand, Alain Silberstein would soon appear and, for example, years of creative interaction with the Japanese and Chinese markets and culture would begin. This finally led to the Chinese Zodiac series and the Steel Automatic Dragon model. This model celebrated the fusion of European and Chinese embroidery art with its dial and the Chinese Year of the Dragon by featuring the five-clawed dragon.

If asked, Silberstein would first introduce himself as a designer, then as "Architecte Horloger". Accordingly, his initial focus was primarily on breaking up the classic and conservative design that ruled the luxury watch market. Instead of a date display, his Krono models had "SmileDays", which assigned a different emoticon to each day. The "hands" are small, geometric wonders and meander elegantly or as colourful triangles over the dial. Silberstein also began to experiment with materials such as fur, plastic and rubber to give his dials, cases and bracelets an extra kick. Anything was allowed and could be produced in any colour imaginable.

Over the years, Silberstein opened up and began to take an interest in complications as well. Under the title "Kinetic Art", he launched a limited edition of 16 different tourbillons, powered by the now defunct Progress movements. Alain Silberstein celebrated his 20th anniversary, however, with a return to his beginnings and the Marine Krono 20, which features a brushed titanium case and TechnoTime movements in addition to the distinctive colours and design.

Alain Silberstein always valued working independently and thus represented an important counterpart to conglomerates (Swatch, Richemont, LVMH) or privately owned luxury brands such as Rolex. Silberstein embraced individuality and thus became a direct forerunner of contemporary icons such as Parmigiani Fleurier or Franck Muller. Its watches were produced only in small numbers and often released as limited editions, which made them sought-after collector's items thanks to their stable value. This was further intensified when Alain Silberstein unexpectedly had to file for bankruptcy in 2012.

The end of his brand did not mean that Silberstein disappeared from the market. He collaborated with the MB&F Kollectiv founded by Maximilian Büsser, which specialized in retro-futuristic design and horological machines. Silberstein designed the HM2.2 Black Box Performance Art and later the LM1 Silberstein. Further collaborations followed for Silberstein, including one with Romaine Jerome.


The emotional bond between watch and wearer

In keeping with the company motto "Le vrai bonheur est d'avoir sa passion pour métier", meaning "True happiness is to have one's passion as a profession", nothing makes Alain Silberstein happier than to forge an emotional bond between watch and wearer. "Watches are lonely objects that measure the most personal thing we have: Our time", Silberstein summarized in an interview. He loves talking about his watches, but in addition to the two main pillars of marketing (innovation and quality), he focuses more on service and constant contact with his clients. For example, when he had to file for bankruptcy in 2012, he made sure that all his service centres were equipped with spare parts for many years to come. Silberstein sees his admirers and supporters as leaders of opinion, confident in their taste and focused on their dreams.