Arnold & Son is a traditional British brand that stays true to the values of its founder John Arnold: superior quality and precision. For more than 250 years, the chronometers of Arnold & Son have accompanied many great seafarers on their expeditions.  More 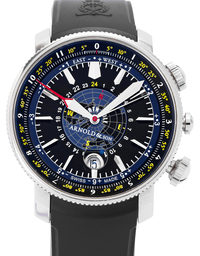 To buy an Arnold & Son watch, you don’t need to go to a jewellers nowadays. It’s much more convenient, but above all, it's quicker online. Discover certified pre-owned Arnold & Son collections on the Watchmaster online shop. Of course, as a certified dealer, we guarantee the authenticity of every watch. Our in-house master watchmakers also ensure every watch undergoes intensive testing and deliver the best possible visual and technical condition.


Arnold & Son Watches on finance: the quickest way to get a new watch

After all, even a pre-owned Arnold & Son isn’t exactly cheap. Therefore, we offer an affordable financing model as an alternative to credit card payments and PayPal. Simply select your custom payment plan during checkout and choose a deposit amount that suits you. With this option, you can conveniently pay for your new watch over a period of no more than 60 months but be wearing it on your wrist in just a few days!

Arnold & Son splits its products into two very comprehensive collections. Both represent a family of elegant, exquisitely handcrafted timepieces: the sublime expression of a long and proud tradition.

The Royal Collection includes a total of 34 series, all of which have one thing in common: They demonstrate the traditional craftsmanship in handmade and superior movements, combined with outstanding technical features and an opulent design.

The current Arnold & Son Instrument Collection was inspired by the timepieces produced by Arnold's son John Roger. At this time, the Arnolds devoted themselves to achieving absolute precision and designing a solution that would enable longitude to be determined accurately and reliably at sea. They were successful in doing so and offered compelling quality, so that within a few years Arnold & Son became suppliers to the Royal Navy and some of the most respected sailors and explorers of their time. The entire collection includes 19 different series, each of which is a technical masterpiece in its own right.

Description: The three-dimensional movement and the open dial of the 41.5 mm watch provides a clear view of the A&S5101 caliber. It has a power reserve of up to 90 hours. The model is water-resistant up to 3 bar and is finished with a stainless steel case. The watch is held on the wrist by a black calf leather strap with a pin buckle.

Description: The dial of this 46 mm steel-cased watch shines in a saturated blue and is adorned with stars and diamonds reminiscent of a starry sky. There is also a small date window at the 3 o'clock position and a moon phase display at the 6 o'clock position. The watch is held on the wrist by a black leather strap.

Description: The company exemplifies the combination of British tradition with Swiss craftsmanship. The 43.5 mm white gold case is a perfect match for the blue dial, which houses the hours, minutes and true beat seconds functions. The model is water-resistant up to 3 bar.

Description: Inspired by the exceptional marine chronometers of the end of the 18th century, the Globetrotter brings back the charm of days gone by. With a 45 mm stainless steel case and water resistance up to 3 bar, it is a genuine eye-catcher. In particular, the dial is a standout feature. From the outside to the inside there is a minute scale, Roman numerals to indicate local time and a second sapphire disc for world time. In the centre you can see a map of the world, which gives the watch its name.

Description: With its understated simplicity, the HMS1 series is a modern interpretation of Arnold & Son's traditionally elegant design. Featuring a classical design, the 40 mm rose gold case has a sapphire glass back, offering a clear view of the centrepiece. The dial is simple but effective, displaying hours and minutes with an additional small second dial at 6 o'clock. The model is water-resistant up to 3 bar and is a limited edition of just 250 pieces.


The long history of a family business

Considering the dominance of the Swiss art of watchmaking today, it’s hard to imagine that a different watchmaking culture and tradition once reigned over Europe. However, during the late 18th century, it was English watchmaking that prevailed. The country's watchmakers developed their own unique aesthetic, with John Arnold and his son playing a key role. They combined their desire for perfection with the ability to find solutions to technical problems and creating gorgeous movements and designs with innovative mechanical features that earned them several patents. Today Arnold & Son is proud to still use and continue this heritage.

John Arnold was born in Cornwall in 1736. His father was already a watchmaker and his uncle was a gunsmith, which probably accounts for his interest in precision engineering and metalworking. As a talented craftsman and scholar, he left England at the age of 19 and moved to the Netherlands to refine his watchmaking skills. He returned two years later and by his mid-20s had established himself as a respected watchmaker in London. After Arnold presented the smallest repeater watch at the court of King George III, it wasn’t long before he gained a wealthy clientele. He was one of the most inventive watchmakers of his time and achieved several patents for his innovations. Arnold’s “No. 36” was the first watch to be called a chronometer - to this day the term is still used to denote extremely accurate watches. John Arnold enjoyed such respect in his profession that he developed a close friendship with Abraham-Louis Breguet. They were constantly exchanging ideas and even entrusted each other with their son’s education.

Until 1857, Arnold & Son chronometers accompanied some of the most important seafarers and explorers of their time on their voyages, including Admiral Harland on his voyage to Madagascar, Captain Cook on his voyage across the Pacific, George Robertson to China and many more. In 1796, Arnold's son John Roger Arnold took over his father's company, who died three years later.

In 1808, in tribute to its founder John Arnold, his good friend Breguet launched his first tourbillon in one of the first pocket watches built by Arnold. This extraordinary watch is still considered to be a milestone in watchmaking history and can be admired in the British Museum in London. The company didn’t stop there and constantly developed new watches. The maritime heritage was carried on - chronometers with elaborate complications made the watchmaker stand out.

In 1995 the brand redefined itself. It is no longer based in Great Britain now, but in La Chaux-de-Fonds in Switzerland. Then came a landmark event in 2010 as Arnold & Son became one of the few watchmakers to manage everything from product development to caliber production independently under one roof. In 2014, the company celebrated its 250th anniversary. To mark the occasion, they launched five new in-house movements. Since then, the company has consistently developed new movements, released innovative timepieces and is one of the few manufacturers that can reminisce about over 200 years of tradition.


The philosophy of the brand is convincing

By contrast to most other watch manufacturers, who often use the same caliber for different models, Arnold & Son develops a new movement for each individual model. Today, the brand maintains a product philosophy established well over 200 years ago, combining traditional craftsmanship with state-of-the-art technology. By pairing sophisticated machinery and the art of watchmaking, Arnold & Son delivered the microscopic precision required to ensure the accuracy and quality that was always a primary focus of John Arnold.
What our customers say about us
SELL YOUR WATCH
Looking for a Watch?
Join our newsletter
[[ newsletterCtrl.subscriptionMsg ]]

* Terms and conditions apply
All prices include VAT. If differential taxation in accordance with §25a UStG is applicable the VAT will not be reported separately.
Watchmaster ICP GmbH | Charlottenstraße 60 | 10117 Berlin | Germany
© Watchmaster ICP GmbH
# 3e7bab478