With a Blancpain Villeret, you don’t just get a classic dress watch, but also a fantastic entry-level model in the world of haute horlogerie. Crafted by the oldest watch brand in the world, every Villeret watch is a work of art.  More 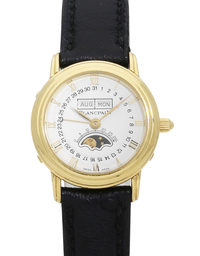 Discover the versatility of the Villeret range


In keeping with a Prestige Series, Blancpain created numerous variations and complications for its Villeret series. While the Villeret series is mainly intended for ladies, it also comes in an ultra-slim version for men and is available with GMT, chronograph, calendar, moon phase functions or a tourbillon. The newer models boast the special features of a complete calendar and moon phase. Don’t expect to see the usual pushers disturbing the smooth aesthetic polish of the case here – instead, patented under-lug correctors have cleverly been installed. There are four pushers, one each for day, month, weekday and moon phase, which you can operate with your fingernail.

What all of the variations of Villeret watches have in common is the double-stepped case and – as expected with Blancpain, of course – the love of watch mechanics. As early as 1926, Frédéric-Emile, the Head of Blancpain at the time, developed the first automatic movement for a wristwatch alongside the British watchmaker John Harwood. Since its rebirth under the leadership of Jean-Claude Biver and Jacques Piguet, Blancpain has exclusively used mechanical movements and handcrafted their watches piece by piece. Following the integration of the Frédéric Piguet manufacture in 2010, Blancpain has also been developing calibres in-house.


How much does a second-hand Blancpain Villeret cost?


An insight into the history of the Villeret series

From a dress watch to the queen of complications


With the Villeret, Blancpain consolidates its reputation as a master of mechanical movements and presents a collection with numerous complications and joyous vintage feel. The name is a direct reference to the place where Blancpain was founded and its tradition-steeped history. The Villeret is Blancpain's classic dress watch, but with its warm gold tones and embellishments it sets itself apart from the cooler, more detached trend of industrial watches. The collection has not lost sight of this design language, despite Blancpain’s introduction of complications to the series. Furthermore, it has been adapted to fit in with the more modern style by both expanding the case size and designing flatter models. For example, at Baselworld 2019, an elegant GMT version of the Villeret watches was presented with the brand's classic models.

You may also be interested in these Blancpain series

* Terms and conditions apply
All prices include VAT. If differential taxation in accordance with §25a UStG is applicable the VAT will not be reported separately.
Watchmaster ICP GmbH | Charlottenstraße 60 | 10117 Berlin | Germany
© Watchmaster ICP GmbH
# 28d8ad592