The Breitling Avenger Seawolf is a rugged, sporty wristwatch that has features of both - the pilot's watch and the diver's watch. Its sporty design and the high-quality materials make it an all-purpose luxury watch.  More 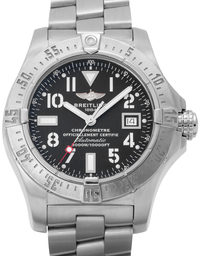 Breitling Avenger Seawolf - a watch for ups and downs

Like all Breitling watches, the Avenger Seawolf has a masculine, strong design. The robust wristwatch is made for everyday life due to its distinctive, yet straightforward and unostentatious style. Optically, it also has elements of aviator and diving watches, which makes it particularly sporty and functional. It is also available as Chronomat version.

With the pilot's watch, it shares its distinctive crown, which is particularly grippy due to the ribbed texture. Even the iconic triangle at 12 o'clock puts it in this tradition. In addition, it is also awarded with a one way rotating, grooved bezel - a typical feature of the diver's watches. Also in terms of functionality, the Avenger Seawolf can prove itself underwater: It is waterproof up to 300 meters.

The models in the popular series have a range of options. The dial is often black or bright yellow - even with the following modell Avenger II Seawolf. There are also versions in other colors. The watch is always equipped with a date display. The case is always made of sturdy titanium or stainless steel or for even more resilience on some models with PVD coating. Often, Avenger Seawolf watches are equipped with Professional bracelets made of stainless steel or titanium. But there are also versions with more comfortable leather or rubber straps.

The story of the Breitling Avenger Seawolf

For more than 150 years, the company stood for luxury watches with a distinctive design. It owes its fame not only of its close relationship with aeronautics, which was until recently hinted at in the logo: Through the B with the side wings. However, Breitling also has some series that are no longer dedicated to aviation. These include diver and functional watches, but also robust everyday watches. Typical style elements are often the chronograph display with three totalizers, the dark brushed steel and the distinctive dials with large numbers and bar indices. Overall, Breitling watches have a dynamic and masculine appearance that radiates an adventurous aura.

This also applies to the Avenger series, which is available in numerous different versions. The name keeps what it promises: These watches stand for strength and courage. At Breitling under the heading "Universal" taken Avenger watches are considered everyday wearable and easy to combine. Nevertheless, all Avenger watches own a functional and visual proximity to the diver's watch. The Avenger Seawolf was launched in the late 2000s and took up the proximity to the nautical in the name. It enjoys so much popularity that it was further developed into the successor series Avenger II Seawolf.

Breitling watches have always been very popular among pilots and amateur pilots: astronaut Buzz Aldrin, Mark Kelly and pilot John Travolta are avowed fans of the watch house. The latter was over 10 years brand ambassador for Breitling. But you do not have to go to dizzy heights to show up with Breitling. Superstars such as Tom Cruise, Russel Crow and David Beckham, for example, have all been spotted with an elegant Breitling watch on the wrist. Incidentally, Breitling is not just for men: Celine Dion, for example, has a ladies model of the Chronomat.

The Breitling Avenger series also won its own fans. Mage and illusionist Chriss Angel, for example, wears a Diamond Super Avenger and also tattoo artist Ami James, known from Miami Ink, shows up with a Super Avenger. Even on the screen you could already admire the Avenger. Leonardo DiCaprio wears a Chrono Avenger in Blood Diamond.

Breitling Avenger Seawolf prices and models at a glance

The Breitling Avenger Seawolf is a popular wristwatch that comes in different variants. Since it is no longer produced in its original version - it is particularly popular with collectors and enthusiasts. We have created in the following an overview of exciting Avenger Seawolf models with prices:

You will find in our online shop a large selection of certified, used luxury watches, including numerous Breitling series. Investing in Breitling can be worthwhile: The stainless steel version of Navitimer, for example, experienced an increase in value of 172% between 1996 and 2016 - which, with good care, can add up to several thousand euros. Vintage models of the Breitling Avenger Seawolf are available in excellent condition at comparably low prices. All watches sold by us are checked by our master watchmakers and provided with a certificate of authenticity. Have you already decided on your Breitling Avenger Seawolf or another luxury watch? Pay easily and conveniently by credit card. Alternatively, you can also finance your desired watch: We also offer installment payments to enable you to plan your investment for the long term. Find out on our website which payment option is suitable for you and buy your favorite Breitling today. For further questions, our customer service is your disposal!
What our customers say about us