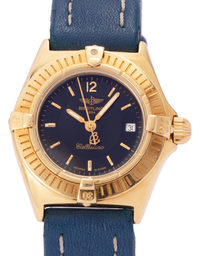 Have you discovered a pre-owned watch you like from the Breitling Callistino women's collection? Then don’t hesitate any longer and add the Callistino of your choice to the basket, proceed to the checkout and pay to complete your order. At Watchmaster, you can choose to pay on finance through one of our partner companies or pay the full amount outright by credit card, PayPal and immediate bank transfer. However, financing gives you the opportunity to plan your investment in the long term. If you still have questions, just give us a call. We will be happy to provide further assistance!


Visual and technical details of the Breitling Callistino

Aptly sized for a ladies' watch, the Breitling Callistino cases range from 26 to 29 mm with a thickness of 10.6 mm, making it a subtle dress watch. The B72 calibre beats effortlessly inside, which is based on the ETA Thermoline 956.152 and has a battery life of three to four years before it needs to be replaced. With a water resistance of up to 100 metres, the Breitling Callistino is definitely rainproof, but you shouldn’t dive down into the depths of the sea with it on your wrist. In particular, vintage models like the Callisto and Callistino are affected by decreases in water resistance over time and should not be pushed to their limits in this respect. The unidirectional rotating bezel and sapphire crystal come as standard features. The models are available either with a stainless-steel Breitling Pilot bracelet or in leather.

The journey to quartz watches

The Breitling Callistino is one of Breitling's early quartz series, which has now somewhat unfairly fallen into the unknown. At the beginning of the quartz crisis, the company still tried to focus on high-quality automatic movements at first. However, a slump in sales meant that production had to be stopped. As if there wasn’t enough to worry about already, Willy Breitling, the popular entrepreneur who took over the brand in 1932 at the age of 19 and established it as a brand that was revered worldwide, died in May 1979. Shortly before his death, he sold the name rights and trademark to the entrepreneur and watch enthusiast Ernest Schneider.

Schneider slowly and carefully took Breitling in a new direction by producing quartz movements while still respecting Breitling's talent for complex mechanical movements. This laid the foundations for the 30 or so Breitling quartz calibres (B50 to B80) that the watchmakers have developed to this day. The first major milestone was laid down in 1995 by the Breitling Emergency, which came with a transmitter fitted in the movement that could send an emergency signal. In the same year, Breitling reissued the Colt series and equipped it with quartz movements and mechanical movements. This was so successful that the series was eventually only produced with quartz movements from 2011 onwards.

The development of the Breitling Callistino

In 2001, Breitling set new standards when it introduced a movement called “SuperQuartz”, which functions up to ten times more precisely than normal quartz movements. With this new innovation, Breitling was the only company whose quartz movements met COSC standards and were certified as proof of this. These movements were so complex that it was not until 2014 that Breitling launched the Cockpit B50, the first mass-produced model with a SuperQuartz movement. With such success with other models and collections, you could be forgiven for forgetting about series like the Callistino, which Breitling initially developed to gradually improve their skill set. The series was designed as a ladies' watch variant of the Breitling Callisto and was produced until 2005. The Callisto and Callistino were both part of the Windrider series, which stands out thanks to its dome-shaped crown and distinctive bezel with the four rider tabs.


Other Breitling models with quartz movements

* Terms and conditions apply
All prices include VAT. If differential taxation in accordance with §25a UStG is applicable the VAT will not be reported separately.
Watchmaster ICP GmbH | Charlottenstraße 60 | 10117 Berlin | Germany
© Watchmaster ICP GmbH
# cf4ebc557