Wear your personal life-saver on your wrist - with the integrated state-of-the-art dual-frequency transmitter, the Breitling Emergency continues to set standards!  More 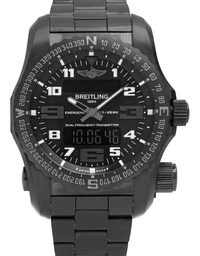 Breitling Emergency: The lifesaver for your wrist


The Watchmaster online shop offers you a wide selection of second-hand Breitling Emergency watches. The models are checked, refurbished and their authenticity is confirmed with a certificate. Have you already found your dream model? You can pay by credit card, by bank transfer or PayPal. With our financing partners, we can also offer you favourable financing options for your Breitling Emergency. If you have any questions or need help, don't hesitate to contact our customer service.


Optical and technical features of the Breitling Emergency

Of custom-made batteries and micro-transmitters


In order to meet the technical requirements of the Breitling Emergency II, numerous innovations in microelectronics and microengineering were needed. The transmitter, which is usually the size of a pack of cigarettes, was designed with the help of an aviation specialist who succeeded in fitting the transmitter into a case of just 51 mm in width and 20 mm height. Since a dual-frequency transmitter draws extremely different currents from the battery (30 mW for 121.5 MHz, 3.2 W for 406 MHz), a revolutionary battery was developed in collaboration with an institute in Grenoble that was able to meet Breitling’s specifications. It will run constantly for up to two months before it has to be recharged.

Breitling has designed the Emergency watch and its transmitter as two different elements, which are completely independent with regards to energy consumption, hence increases safety. In addition to its function as a lifesaver, the Breitling Emergency II is also equipped with a 1/100-second chronograph, alarm clock and backward counter. It can even specify a second time zone and has a multilingual calendar. The Emergency uses a thermo-compensated, COSC-certified SuperQuartz movement that is ten times more accurate than a regular quartz watch.


Breitling Emergency models and prices at a glance

The History of Breitling Emergency

When Breitling launched the Emergency in 1995, it was the first wristwatch with an integrated micro emergency transmitter. The brand achieved a technological breakthrough, which quickly became a bestseller with around 40,000 models sold. At that time, the focus was particularly on locating pilots and passengers in the vicinity after a plane crash. It was designed to work in tandem with the emergency beacons all aircraft are equipped with. It was set to the 121.5 MHz standard flight emergency frequency.

Breitling also worked together with Cospas-Sarsat, the world-renowned satellite-based search and rescue system for the acquisition and localization of emergency beacons and PLBs (Personal Locator Beacon). Simultaneously developed in the USSR, US, Canada and France, it was merged together during the Cold War and has since then saved more than 20,000 lives. In 2009, Cospas-Sarsat switched from the analogue 121.5 MHz frequency to the 406 MHz digital frequency. This is safer than the analogue, providing more information such as the identity of the signal transmitter which minimizes the risk of false alarms. Mostly ships and airplanes still receive the old, analogue frequency, which is why a dual system is required.

In 2013 Breitling responded and launched the Emergency II – an update that is in no way inferior to its predecessor in innovation. It is the first wristwatch with an integrated dual-frequency emergency beacon. This provides double safety: a first digital signal is sent to the satellite system in 0.44 seconds every 50 seconds, simultaneously a micro-transmitter continuously sends an analogue signal to ships and airplanes in the surrounding area every 0.75 seconds for 0.75 seconds that helps with locating and rescue. According to Breitling, functional reliability is guaranteed down to -20° Celsius. A miniature instruction manual is engraved into the bottom of the watch. Such features make it the perfect companion for amateur pilots, sailors, mountaineers or anyone with a sense of adventure.

The fact that a Breitling watch also proves its worth in extreme situations is demonstrated repeatedly by the well-known adventurer Bear Grylls. He always wears his Breitling Emergency on his wrist, with good reason: thanks to the emergency beacon integrated into the watch, he can ensure that help is on its way immediately in the event of an emergency.


A lifesaver for amateur pilots and stranded car drivers

According to Breitling, Emergency watches have already saved more than 20 lives. Special attention is paid to the case of Quentin 'Captain Q'Smith, a two-time aerobatic champion and the only human to date who managed to fly in a helicopter from the North Pole to the South Pole. The first attempt failed spectacularly. In 2003, he and Steve Brooks attempted to cross the Drake Passage. This approximately 900 km wide area of sea, between the southern tip of South America and the Antarctic Peninsula, is known among pilots for its dangerous winds. The big studded iceberg water makes an emergency landing almost impossible. After an engine failure, Smith fought to keep the machine in the air. His Emergency on his wrist sent a signal and they were found even in heavy rain and fog by a rescue aircraft.

In an episode of Top Gear, the functionality of the Emergency was prominently shown. In season 22, episode 6, Richard Hammond was abandoned in the wild at Lone Wolf Mountain in British Columbia with his Breitling Emergency. After activating the Emergency signal, his co-hosts were able to locate him and hurried to rescue him.