With or without a panda, the Breitling Top Time remains the flagship model of elegance from the 1960s.  More 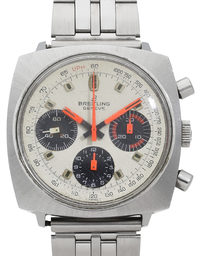 The Top Time seduces you with the finest engineering skills

By the time Breitling began to produce Top Time, the company had already switched from its in-house movements to movements from third-party manufacturers. For the Top Time, Breitling enlisted the manufacturers Venus (Venus 178, Venus 188) and Valjoux (Valjoux 7730, Valjoux 7733, Valjoux 7736), with the Venus calibers being used in the earlier Breitling models. Valjoux adopted the technology used in the Venus 188 caliber, added slight improvements and labelled this new movement as their own. All were chronographs with manual winding, with models that use the Venus 178 movement being particularly sought after by collectors due to their accuracy.

In terms of appearance, the Top Time comes in round or cushion-shaped cases between 35 and 40 mm, made of stainless steel, 18-carat gold or with gold-coloured coating. The cushion shape was particularly popular in the late 1960s and the corresponding models were made with either crystal or plexiglass. Another striking feature is the lack of a bezel.

Unlike many of the brand's other collections, the Breitling Top Time is relatively affordable for new watch fans. The timeless classic design with the open, clearly structured dial makes the timepiece a stable value investment. Experienced collectors know that trends come and go – but it’s likely that the elegance of the 1960s will always be in great demand.


Eternal youth: The history of the Breitling Top Time

The Breitling Top Time series was launched in 1964 and at that time was mainly aimed at young men. As such, it has been positioned alongside the brand's best-known series - the Navitimer and Chronomat - as an entry-level model with reasonable prices. Willy Breitling described them in the following way: “We want to open up the field to younger watch enthusiasts (...) Our models mainly target the needs of young professionals, for whom we have designed a series of ultra-modern chronographs, in which Top Time is the flagship watch!” However, because of its elegant, classic design, Top Time also quickly established itself as a dress watch for women.

It is not widely known that the Top Time was offered as two different versions: One was water-resistant, the other was not. The models almost look identical, but the non-water-resistant models (Ref. 2001 and 2003) had a removable back, while the case of the 2000, 2002 and 2004 models was sealed. For aesthetic reasons, Breitling milled a line on the back of the later models that gave the illusion of a separate section, with these models actually being crafted as half-shells and the movement was inserted from the front. Consequently, these watches were often damaged at the sides as uninformed owners tried to open the Top Time at the wrong milling line.

The Breitling Top Time marked 2020 with something of a revival, releasing the limited edition A23310121G1X1 model. With the so-called “Zorro dial”, those who are particular fans of vintage looks will enjoy this release. Available brand new for a price of €4,750, the Top Time can still be considered an affordable option.


From Hollywood to the slopes: Top Time as a Pop Icon

Over time, the Breitling Top Time has established itself as an icon of pop culture. For example, it adorned Sean Connery's wrist when James Bond had to find two atomic bombs in the film “Thunderball”. Q modifies the Breitling Top Time (Ref. 2002) to act as a Geiger counter, which proves to be extremely useful. This model is also known as Thunderball because of the film and has a special place in the heart of collectors.

In sport, the Top Time is known mainly for being worn by the Olympic Alpine skier Jean-Claude Killy. Attracted by its sporty, elegant design, Killy was the proud owner of a Breitling Top Time (Ref. 1765). It is also said that Scottish Formula 1 driver James “Jim” Clark also wore a Top Tim during his races.