Precise and stylish in a vintage look: The Breitling Transocean Chronograph is a triumphant celebration of their success.  More 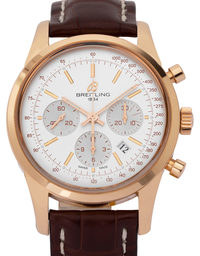 The Transocean: The elegant update of the Navitimer

Pilot's watches have always been one of the most important series in Breitling's portfolio. The timepieces evolved simultaneously with aircraft technology and were initially on-board clocks, which Breitling produced for the Royal Air Force and, after the Second World War, also for Boeing, Lockheed and Douglas. In 1952 and 1954, Breitling collaborated with the Aircraft Owners and Pilot Association (AOPA) and together they launched the legendary Breitling Navitimer as a further development of the Chronomat. From this point on, pilot's watches were split into different series, such as the Breitling Transocean in 1958, which was intended to be a classic version of the Navitimer. At Watchmaster you can buy pre-owned Transocean models online at affordable prices and also have the option of conveniently paying on finance. Please feel free to get in touch with our customer service team for comprehensive advice.

Transocean Chronograph: The watch for the high-flyer with style

The potential problem with vintage models is that in the quest to live up to their aesthetics, they sometimes compromise on the functionality of the watch. For example, the dial is often overfilled with totalisers and therefore readability is poor. Breitling was aware of this problem and solved it with an elegant and simple dial design that opted for a classic arrangement of the totalisers at 3, 6 and 9 o'clock. Breitling offers different variations of the Transocean, including the Ref. AB0151 with a “Reversed Panda” dial borrowed from Top Time with a black background and white totalisers or the Transocean Chronograph Ref. 7102, a sporty, retro version with oval displays based on racing driver watches.

The automatic movement with a B01 calibre is testimony to Breitling's own engineering skills. The first movement independently produced by Breitling provides a power reserve of up to 70 hours and beats at 28,800 vibrations per hour, guaranteeing total precision. Naturally, the B01 is COSC certified, as are all Breitling's other movements. The models also have a transparent cover so you can always watch the movement working away.


Development of the Transocean Chronograph

As many purists have long argued, vintage Breitling models have a charm and presence that has been somewhat lost in the newer models. So when Breitling went back to its roots in 2011 with the Transocean Chronograph, fans received the model with great enthusiasm. Starting with the classic logo, the Transocean Chronograph is also inspired by its mother model in terms of design.

David Beckham probably knows how difficult it is to keep track of time. In his career, in which the successful professional footballer played for Manchester United, Real Madrid and L.A. Galaxy among others, his Breitling Transocean Chronograph was always faithfully by his side, reaffirming once more why he also made a name for himself as a style and fashion icon.

Flying high with these Breitling series