With the 21 Must de Cartier, the Paris-based company brought back one of its most interesting collections. The series is aimed at women who are looking for their first ladies' watch and are also attracted to sporty designs.  More 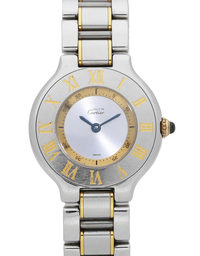 French jewellery and watch company Cartier breathes new life into one of its most interesting collections with the 21 Must de Cartier. With a new decorative gold technique and their trust placed in quartz, this series is aimed primarily at women who are looking for their first ladies' watch and appreciate sporty designs.


How much does a pre-owned 21 Must de Cartier watch cost?

The 21 Must de Cartier: Affordable luxury

While Cartier was mainly known for high-quality luxury, in the 1970s the company started to rethink its approach and make its models more affordable. In 1972, Robert Hocq took over the company and, together with Alain-Dominique Perrin, developed the idea of a new, more affordable luxury watch. Consequently, the Must de Cartier series was launched in 1976 to serve the entry-level category in the watch market.

This decision was quite controversial. In the 1970s, Cartier was quite simply the luxury brand and was appreciated by its wearers for its exclusivity and well-defined brand identity. They worked on mystery watches and exclusive accessories, but also realised that the quartz crisis made the market even more competitive and a rethink of the pricing structure was necessary. The Must de Cartier collection initially focused on ladies' watches, but soon attracted men as its wearers. The 21 Must de Cartier is a new edition in the series and brings the spirit and style of the Must de Cartier collection into modern times. The attractive price of the 21 Must de Cartier collection is indeed reflected in the workmanship of the watches. For example, the models are made of gold-plated sterling silver instead of being covered with real gold. Generally, the models have a diameter of 28 mm, but 33 and 38 mm are also available. The watches exclusively use quartz movements.


Worn by stars: the 21 Must de Cartier

A subtle, unpretentious series, the 21 Must de Cartier has been worn by numerous celebrities. Actress Anna Paquin (True Blood) was seen wearing Ref. 10109T2. Michael Chiklis also wore a 21 Must de Cartier chronograph in his famous role as detective Vic Mackey. In its marketing, Cartier didn’t use celebrities to advertise it until 2018, preferring instead to let the quality speak for itself. Cartier worked with actresses such as Monica Bellucci and Sofia Coppola, but the reputation of the models was enough in itself.