Named after the year in which the traditional Swiss watchmaker was founded, the sporty Ebel 1911 chronographs were instantly a real hit and are still in high demand today.  More 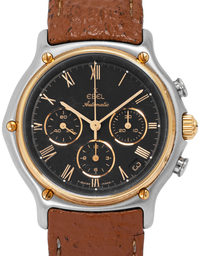 What can you expect when buying a pre-owned Ebel 1911 watch?

Experience the harmonious combination of classic and modern


Sometimes watch model names have you wondering how the name actually came about. With the Ebel 1911 watch series, there is no doubt whatsoever. The name marks the birth year of the Swiss watchmaker. For Ebel 1911, the success of these sporty chronographs came just as easily as finding a name.


Technology and design of the Ebel 1911 series

Following a period in which things had quietened down around the company from La Chaux-de-Fonds, Ebel made an impressive comeback in the early 2000s. They revamped their popular watch series by going back to their roots and adapting familiar elements such as the hexagonal shape to meet modern requirements such as larger case diameters, for example. Hence the series was named with the addition of “BTR”, signifying Back to Roots.

If you are looking for a truly versatile timepiece, we can recommend the chronograph models from the Ebel 1911 series in addition to the modern, edgy sports models. The case sizes vary between 38 mm and 43.5 mm. In addition to the shape of the watch case, the five screws that secure the glass in place are a well-known feature of Ebel 1911 watches. This design goes back to Eddy Schoepfer, who was hired by Pierre-Alain Blum to give the company's watches a distinctive appearance. The dials are characterised by three totalisers in a Tri-Compax arrangement, with the date window located between 4 and 5 o'clock. For these models, you can choose between a version with Roman numerals or bar indices.

The Ebel 1911 watches from the 2000s onwards (Ref. 8137241 and Ref. E9137260) are driven by the in-house Ebel Calibre 137 or E137. This movement, which was launched in 1995 having been developed for 5 years, is based on the Lemania 1350 movement and provides a power reserve of 48 hours at 28,800 vibrations per hour. However, in the models from the 1980s,you will find another movement at work inside – the El Primero movement by Zenith. So, rest assured that buying an Ebel 1911 means you are the proud owner of an elegant and highly reliable timepiece.

If you are looking for a chronograph with a certain je ne sais quoi, you won’t have any problems finding it with Ebel. The 1911 series convinces with a unique design, exciting material compositions and a well-balanced price range.


Destined for success with the Ebel 1911

Between New Wave and the quartz crisis


The 80s are remembered for the exuberant trends such as big hair styles, shoulder pads or neon-coloured aerobics attire. However, the release of the Ebel 1911 also falls into this period. It was one of many milestones of the company and came at a time when the watch industry had to cope with its biggest challenge.

While the very existence of many companies was endangered by the ongoing quartz crisis, Ebel excelled themselves and continued to grow. The number of employees rose high into the three-digit range. For a long time there had just been 40 employees. At the time, the company was in the hands of the third generation of the family. Pierre-Alain Blum had taken over the business from his father Charles Blum and continued to promote the original values of the company, of which quality care was the most important. All of the steps in the production process and watch parts were carried out and produced in Switzerland. This predestined Ebel to take on production for Cartier, who were looking to establish themselves on the watch market in the mid-70s. Ebel's 75th anniversary also came in this period of growth. This provided the perfect occasion for the release of a watch series that would celebrate the company's heritage and promote it at the same time. The result was the 1911 Collection, commemorating the year Ebel was founded. The 1911 models were characterised by their balanced design, which made them suitable for many different purposes and occasions. 20 years later, the company stayed true to its values and took their next steps into the new millennium with a modernised 1911 series.

The highly popular US TV series Miami Vice played a huge part in the 80s style and remains a pop-cult classic today. Don Johnson and Philip Michael Thomas play two undercover investigators who fight against nefarious gangsters in sunny Miami. In addition to the famous combination of pastel-coloured suits and T-shirts, Don Johnson wore an Ebel 1911, securing a place in the pop-culture hall of fame for the model. So what’s not to like? Invest in a pre-owned Ebel 1911 model from Watchmaster now!


Ebel certainly knows how to make highly recognisable watches. Even so, the diversity of Ebel styles available caters for the wide range of customer tastes. We have put together some other Ebel series that are worth checking out.

* Terms and conditions apply
All prices include VAT. If differential taxation in accordance with §25a UStG is applicable the VAT will not be reported separately.
Watchmaster ICP GmbH | Charlottenstraße 60 | 10117 Berlin | Germany
© Watchmaster ICP GmbH
# 5863446bf