The Longines Lindbergh is a timepiece known to nearly every fan of pilot’s watches. At a relatively low price, you too can join this exclusive circle and learn the art of celestial navigation.  More 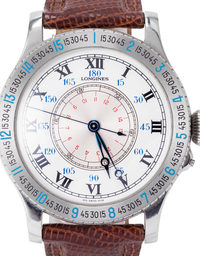 Have you already chosen a pre-owned model from the Longines Lindbergh series? Once your chosen watch is in the shopping basket, proceed to the checkout to complete your order. You have the option to either pay the full purchase price outright via PayPal, instant bank transfer or credit card or to finance the watch. Financing your Longines Lindbergh through one of our partner companies allows you to make partial payments in manageable instalments that you can set in advance. Financing allows you to plan your investment in the long term and to get your hands on your new luxury watch in no time at all.


Visual and technical details of the Longines Lindbergh

Given the huge amount of information and data on the dial of the Longines Lindbergh, the surrounding case needs to be big enough to accommodate this which is why the watch has a 47.5 mm diameter and is sure to attract attention when worn. From the sheer size and stainless-steel case to the durable leather strap with Charleston buckle, the entire timepiece is designed with functionality and readability in mind. It also conceals a hidden gem inside. With a small pusher below the onion-shaped Louis XV crown, you can open the back of the watch and look at the Calibre L699. On the inside of the back cover, you will find an engraving that contextualises the historical significance of the watch. Visually speaking, Longines has designed the Lindbergh as a tribute to the original but has included the latest Longines calibre inside. In addition, the models produced are only available in limited quantities, which ensures the exclusivity of the series and makes the Longines Lindbergh an ideal investment for collectors of pilot's watches.

The Longines Lindbergh series is a tribute to one of the most legendary timepieces in Longines history. The series is named after the remarkable collaboration between Charles Lindbergh, one of the most famous aviation pioneers, and Longines. Lindbergh incorporated a so-called hour angle function into the design of his watch, which allows the wearer to determine their exact geographical position. Today, location tracking is much easier with electronic aids such as GPS and satellites. In the past, however, this was a huge challenge, particularly for pilots. Not only did they have to control the aircraft, but they also had to constantly work out their position, so they didn't deviate from the route. Even the smallest mistake could lead to death.

Lindbergh finally dared to cross the Atlantic in 1927 and fly nonstop from New York to Paris. He was not the first to try to do this, but none of the other six pilots had survived the attempt before. Lindbergh was just 25 years old and navigated mostly using dead reckoning and terrestrial navigation. Although this sounds complicated, it mainly involved the constant calculation of fixed points and estimations of speed and course over elapsed time. However, the problem with dead reckoning is that should the errors accumulate, then the pilot can deviate further and further from their route in the case of a miscalculation. Lindbergh thankfully managed to stay on course and landed safely on May 21, 1927 in Paris.


Other Longines series to invest in