Highest quality at affordable prices - that was the goal of watchmaker Louis Erard. For almost 90 years, the elegant timepieces have enchanted their wearers with filigree designs and precise workmanship.  More 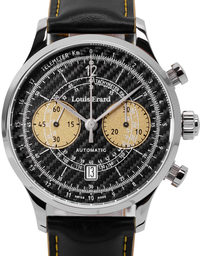 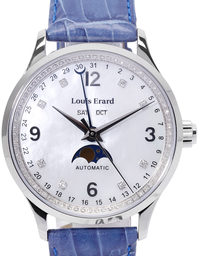 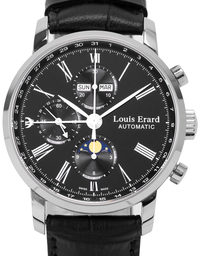 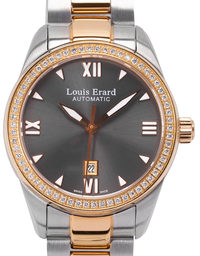 Used Louis Erard or rather a new model?

Watchmaster's Louis Erard watches, like all our vintage and used luxury watches, are checked, refurbished and certified by our master watchmakers before being sold. If you have already decided on a timepiece, you now have the opportunity to pay for the new favorite piece by credit card and soon wear it on your wrist. Alternatively, a payment via PayPal is possible. However, if you would rather plan for a longer term and consider financing, our monthly installments could suit you. If you have any further questions, please call our customer service or inform yourself on our website.

The most popular Louis Erard collections

The Excellence Collection was launched to mark the 80th anniversary of the brand. It stands for the company's characteristics more than any other series. Exclusivity and various mechanical complications dominate the models of this series of watches. Whether beautiful moon phase functions or elaborate chronographs, the collection abounds with filigree watchmaking and elaborate mechanics.

The Héritage collection is characterized by stylish simplicity and restraint. The watchmakers do not abandon the latest technical developments in the models. Modern materials, mechanics and refinements are used to create these luxurious timepieces. Tradition and innovation are unparalleled in this series.

The Sportive collection was developed for sports-loving customers. The models range from simple three-hand watches to elaborate chronographs. The design is consistently elegant and kept as simple as possible so that the watch can be read perfectly under all circumstances. Perfect for anyone who can define themselves through movement and activity. These watches are held in a sportive style in its most attractive form!

The 1931 collection bears the year origin of the first Louis Erard watch in its name. Especially for watch lovers, this vintage series is very interesting. The models are characterized by its monochrome design and dynamic curves. The watch reminds of a bygone era without being old-fashioned. By using today's techniques and materials, the timepieces prove that vintage is more modern than ever.

The best reasons to buy a Louis Erard watch

How much does a Louis Erard watch cost?

The story of Louis Erard

In 1929, Louis Erard & André Perret was founded by the watchmakers of the same name in La Chaux-de-Fonds, Switzerland. Initially, high-quality pieces for elegant timepieces were produced. Especially the filigree and excellently processed watch cases enjoyed so an amount of popularity that already 2 years later, starting from 1931, the first in-house produces models under the name Louis Erard were released. Thanks to the ever-increasing demand, the company grew rapidly and employed more than 60 employees after less than 8 years. In 1992, the headquarters of the now international successful company moved to the Swiss Jura to Le Noirmont, where it can still be found today.

A major milestone on the way to the low-priced "Haute Horlogerie" was the first in-house module developed in collaboration with "Soprod" in 2009. Soprod is known for its high-quality Swiss quartz movements and stands for the highest quality.

In homage to the brand's high quality and luxurious identity, the Excellence Collection was launched in 2011 for its 80th anniversary.
In 2014, Louis Erard celebrated the 200,000 clock produced in Le Noirmont. The brand is characterized by tradition, but still tries to incorporate the latest developments and innovations in the new collections.
This is how the popular Héritage collection 2016 will be taken up again, the classic design taken up and technically revised.

The philosophy of Louis Erard

The philosophy of the brand is to make watches that meet the demand of the customers with originality and a strong sense of horlogerie. In doing so, Louis Erard attaches great importance to ensuring the Swiss standard. In the center there are no major marketing campaigns or large production capacities. Instead, passion, commitment and transparency are the focus. This allows the developers to focus on creating an exceptional price-performance ratio.
What Customers say about Us
SELL YOUR WATCH
Looking for a Watch?
Join our newsletter
[[ newsletterCtrl.subscriptionMsg ]]