Mauboussin is a traditional, french jewelry house that was one of the most popular addresses in the world during the early 20th century. Its luxury watches skillfully combine traditional elements of watchmaking with modern design ideas.  More 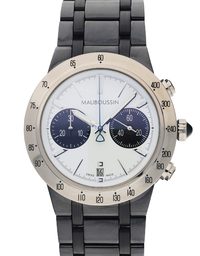 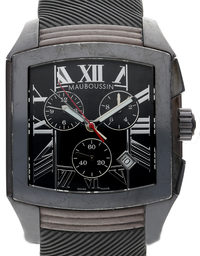 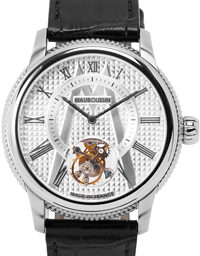 In our online shop you can find not only major brands but also certified, used luxury watches from smaller manufacturers. Also numerous brands, which one knows rather because of their jewelry collections, are represented here with their high-quality watches. This includes Mauboussin. The purchase of a used Mauboussin is worthwhile compared to a new purchase. The possibility exists, thereby to acquire a Mauboussin for a cheaper price. Important when buying, are quality and authenticity - both are ensured on a purchase with us by a certification. If you have decided on your favorite model, check our website for the right payment option. Credit card, PayPal or flexible installments are possible. Thanks to qualified financing partners, it is easy to finance a Mauboussin. Any question? Just contact our customer service.

The most popular Mauboussin series

Best reasons to buy a Mauboussin

Mauboussin prices and models at a glance

Mauboussin is a traditional house with a long history. With high-quality jewelry, the brand inspires women worldwide. Today, Mauboussin has first-class wristwatches for men and women in its range. In addition to some affordable priced series, the brand also offers higher-class luxury watches. It may be worthwhile to look for used models here. Also no longer produced references, limited editions and special editions are often worthwhile as an investment and frequently experience a constant increase in price, due to their limited number of pieces.

Mauboussin - French jewelry on the wrist

Mauboussin is a traditional jewelry house from France that can boast with almost 200 years of history. As one of the few jewelry companies in the world, it is still independent of large financial groups. Alain Némarq - director of the house, also announced in 2016 that 85% of the jewelry production is located in Europe. This guarantees a high quality product and fair production circumstances.
Above all, Mauboussin is known for its fine and high-quality jewelry. Rings, necklaces, earrings - are found in the jewelry collections. The sophisticated brand is aimed primarily on women. In the Haute-Horlogerie, it has made a name in recent years. Here Mauboussin offers both men's and women's series. They share an elegant design with recognition value and innovative watchmaking. With catchy names like "Amour, le jour", "Tourbillon" or "T'es un Champion, Mec", the jewelry house expresses the beauty and stubbornness of its creations.

The history of Mauboussin

The history of the jewelry house Mauboussin dates back to the year 1827. At that time Monsieur Rocher opened a jewelry shop in Paris. His successor was Jean-Baptiste Noury, after which the jewelry business was named: Maison Noury. But it didn't end there. Noury hired his nephew George Mauboussin, who took over the business in 1883 and in 1922 gave his name to the now very famous jewelry company.
A milestone in the history of the brand was when the jeweler moved to the Rue Choiseul. So it got closer connected to its audience. The new building also contained studios, sales and exhibition halls - all consolidated under one roof. So Mauboussin could arrange exhibitions of its diamonds, rubies and emeralds, which brought the house much international recognition and attention. Mauboussin added luxurious plaques engraved with poetic and historical texts to the invitations of his exhibitions. So he gained the interest of the invited with ease. But also the media soon became enthusiastic about the masterpieces of the jeweler. The most influential magazines such as Vogue, Vanity Fair and Harper's Bazaar published about the brand. George Mauboussin quickly became a well-known personality in the world of luxury.

For a long time Mauboussin remained a family business. The business was dominated by Pierre Mauboussin and the nephew of Jean-Baptiste Noury, Marcel Goulet. Inspired by aeronautics and influenced by his education at the Ecole des Hautes Etudes de Commerce, Pierre Mauboussin combined two activities: jewelry and aircraft design with the desire to create new and innovative things. After an exhibition in New York, he founded "Mauboussin Inc." with the opening of a number of jewelry stores on the Park Avenue. As a result of the crisis in 1929 Mauboussin Inc. had to close the salons in New York. Above all, orders from aristocratic and princely houses helped the long-established company out of the crisis.

In 1934, Marcel Goulet took over the business together with his son, who was then appointed director in 1943. Six years later, the company Mauboussin becomes a SARL. Goulet contributes to the creation of the "Haute Joaillerie de France", which unites the leading luxury jewelry companies. In addition, Mauboussin has been a member of the Comité Colbert since 1954. A year later, the jewelry company opens its famous shop on Place Vendôme in Paris. With the entry of Alain Goulet-Mauboussin into the company in 1972, Mauboussin opened up itself to the Asian market. Patrick Goulet-Mauboussin joined the company three years later and was inducted onto the board along with his brother Alain. The company remains a family business and independent throughout its whole development.
The company experienced a strategic turnaround when it lost one of its key customers in 1998. The orders of the Prince Jefri the Sultan of Brunei had been held accountable for almost 80% of the sales. A huge gap to fill. The solution came with the takeover of the family business by the Swiss financier Dominique Frémont, who has also been the sole owner since 2005. Through various marketing and corporate strategies, the brand has been successfully established on the market again. Mauboussin sales increased from € 12.5 million in 2003 to € 25 million in 2006. Mauboussin left its historic site on Place Vendôme in 2015 for its new address on the famous Rue de la Paix in Paris.

What Customers say about Us
SELL YOUR WATCH
Looking for a Watch?
Join our newsletter
[[ newsletterCtrl.subscriptionMsg ]]